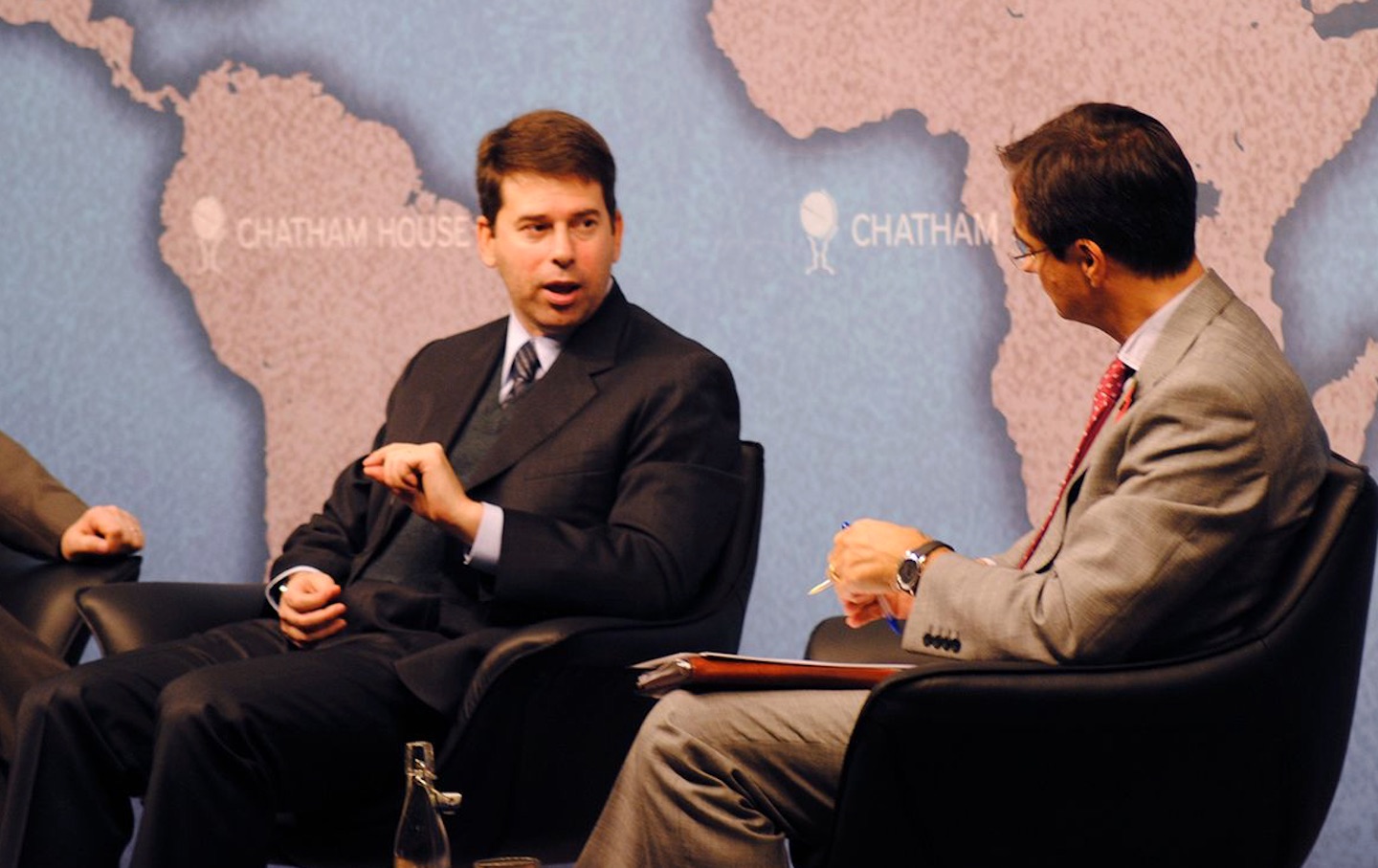 I haven’t seen much discussion of Daniel Drezner’s new book, The Ideas Industry: How Pessimists, Partisans, and Plutocrats Are Transforming the Marketplace of Ideas—which is weird, because it’s the kind of book that is written more to be reviewed and argued about, as opposed to actually purchased.1

Drezner’s book is the latest investigation into the state of America’s public intellectuals and the “debate” they conduct with their patrons and their public, and, especially, among themselves. He joins a distinguished procession of thinkers who have tackled the subject, including Walter Lippmann, Randolph Bourne, Lewis Mumford, Edward Shills, Irving Howe, Russell Jacoby, Edward Said, and, most recently, Richard Posner. (See my “Judging the Wise Guys,” The Nation, January 10, 2002.) Drezner is a reliable and intelligent guide to the current state of play. But while focusing on the trees, he doesn’t always pay proper attention to the forest, which in this case is the power of money to corrupt and control literally everything with which it comes into contact—most particularly intellectual culture.2

Our most famous purveyors of ideas sell themselves to the wealthy much like the courtiers of the Middle Ages.

Drezner by no means ignores the issue. Early on, he makes a crucial distinction between old-fashioned “public intellectuals” and the now-trendy “thought leaders.” The latter model is one that sells itself less to an identifiable “public”—something that has become increasingly difficult to define in a society continually segmenting itself according to ever-more-narrow criteria—than to plutocratic patrons. Once upon a time, we relied on intellectuals to “speak truth to power,” as the saying goes. Of course, real life was never so simple. But the adversary culture that arose in the bohemia of Greenwich Village in the early 20th century and among the (mostly) Jewish intellectuals who founded the independent Partisan Review in the 1930s offered at least a basis from which both to critique capitalism and to imagine alternative systems that might one day replace it.3

Today, our most famous purveyors of ideas sell themselves to the wealthy much like the courtiers of the Middle Ages. Drezner notes that these ideas are therefore shaped by the “aversion” that plutocrats share toward addressing the problems we face. Inequality? Global warming? Populist nihilism? An explosion of global refugees? From a Silicon Valley perspective, Drezner notes, such things are not a failure of our system but rather “a piece of faulty code that need[s] to be hacked.” Examining data from a survey of Silicon Valley corporate founders, Drezner notes their shared belief that “there’s no inherent conflict between major groups in society (workers vs. corporations, citizens vs. government, or America vs. other nations).”4

“Intellectuals who wish to cater to this crowd will find it difficult to contradict the narrative of meritocratic achievement,” Drezner explains. His discussion of the function of the TED phenomenon is especially cogent: “TED talks are designed for thought leaders to appeal to plutocrats. At less than twenty minutes, they are mercifully short—a perfect format for potential patrons. The working rich are busy people operating on a compressed schedule. Time is their scarcest resource, and they have limited attention spans…. The format itself also rewards more utopian thinking. There are no discussants for TED talks, no critical feedback.” It’s important to remember that we are not talking about the Koch brothers’ spending or the corruption of traditional think tanks by corporate money or the purchase by foreign governments of this or that policy shop. This is what’s happening on the progressive side.5

That money demands compromises from culture is not exactly breaking news. But its effect on progressive politics has been devastating, and here, Drezner’s account fails to do the problem full justice. The labor movement long ago lost the ability to compete with corporate America and individual billionaires for the funds needed to make ideas meaningful in the real world, so liberals and progressives must now drink from the wells of wealth. After all, here is what then-Senator Barack Obama wrote in The Audacity of Hope (2006) about his time as a rising Chicago politician:6

Increasingly I found myself spending time with people of means—law firm partners and investment bankers, hedge fund managers and venture capitalists. As a rule, they were smart, interesting people, knowledgeable about public policy, liberal in their politics, expecting nothing more than a hearing of their opinions in exchange for their checks. But they reflected, almost uniformly, the perspectives of their class: the top 1 percent or so of the income scale that can afford to write a $2,000 check to a political candidate. They believed in the free market and an educational meritocracy; they found it hard to imagine that there might be any social ill that could not be cured by a high SAT score. They had no patience with protectionism, found unions troublesome, and were not particularly sympathetic to those whose lives were upended by the movements of global capital. Most were adamantly prochoice and antigun and were vaguely suspicious of deep religious sentiment.7

After spending so much time with donors, Obama admitted, he found himself “avoiding certain topics during conversations with them, papering over possible differences, anticipating their expectations…. [A]s a consequence of my fund-raising I became more like the wealthy donors I met, in the very particular sense that I spent more and more of my time above the fray, outside the world of immediate hunger, disappointment, fear, irrationality, and frequent hardship of the other 99 percent of the population—that is, the people that I’d entered public life to serve.”8

Most of the other stories Drezner relates also have the power of money as their underlying theme. Nicholas Kristof’s ill-informed protestations notwithstanding, the age-old problem of political scientists who write impenetrable prose in their own language has been largely rendered obsolete by the rise of social media. Those who wish to participate may do so. But it won’t help them get tenure, as Drezner’s own career demonstrates. (A prominent blogger, he was rejected for tenure at the University of Chicago but is now happily ensconced at Tufts University’s Fletcher School of Law and Diplomacy. He also blogs for The Washington Post.) What’s more, a whole school of social-science-literate journalists, led by Ezra Klein of Vox and his many imitators, has sprung up to bring the findings of the field to interested readers. Notably, Klein needed to become an entrepreneur as well as a journalist to fulfill his vision: When he took the idea behind Vox to The Washington Post, the paper wasn’t interested.9

But the more worrisome question is the comparative lack of social status, income, and prestige enjoyed by nearly every type of social scientist except economists. Drezner points out that while economists are perhaps more liberal on many issues than most Americans, they are more conservative than other social scientists, especially when it comes to their field of expertise. Just like the Silicon Valley billionaires, Drezner writes, “economists share a consensus about the virtues of free markets, free trade, capital mobility, and entrepreneurialism.” Economists are better paid than other professors, and they are quoted infinitely more often and more respectfully in the media. They fill the top jobs in most presidential administrations and, especially lately, have taken advantage of a bull market for their commentary as op-ed writers.10

All this despite the fact that the profession’s record in providing politicians and citizens with the knowledge necessary to deal with the problems we face is, with just a few exceptions, abysmal. And these exceptions—people like Paul Krugman, Joseph Stiglitz, and Simon Johnson—are almost always outliers in the system and bitter critics of the consensus that operates among both economists and the journalists who consistently rely on their expertise. Significantly, even though they are no doubt the leading lights of the progressive side of their profession, none were considered for top jobs in the Obama administration, or in the one that Hillary Clinton hoped to lead.11

Mad Men: Trump May Be the Perfect Vehicle for Kissinger’s Philosophy

The primary talent demonstrated by the “thought leaders” who rise to the top of this stew—people like Thomas Friedman, Niall Ferguson, and the heavyweight champion, according to Drezner’s own poll (in which I participated), Henry Kissinger—is to somehow flatter great wealth even as they pretend to challenge it. Should they pull it off, they get to feel good about themselves as enormously well-remunerated and highly respected public servants. The truth, however, is that by comforting the comfortable, they end up further afflicting the afflicted. It’s no wonder that not only Donald Trump but the entire Republican Party and its supporters now feel that they can ignore the arguments of this class. It was they who built this city: this city of ruin.12