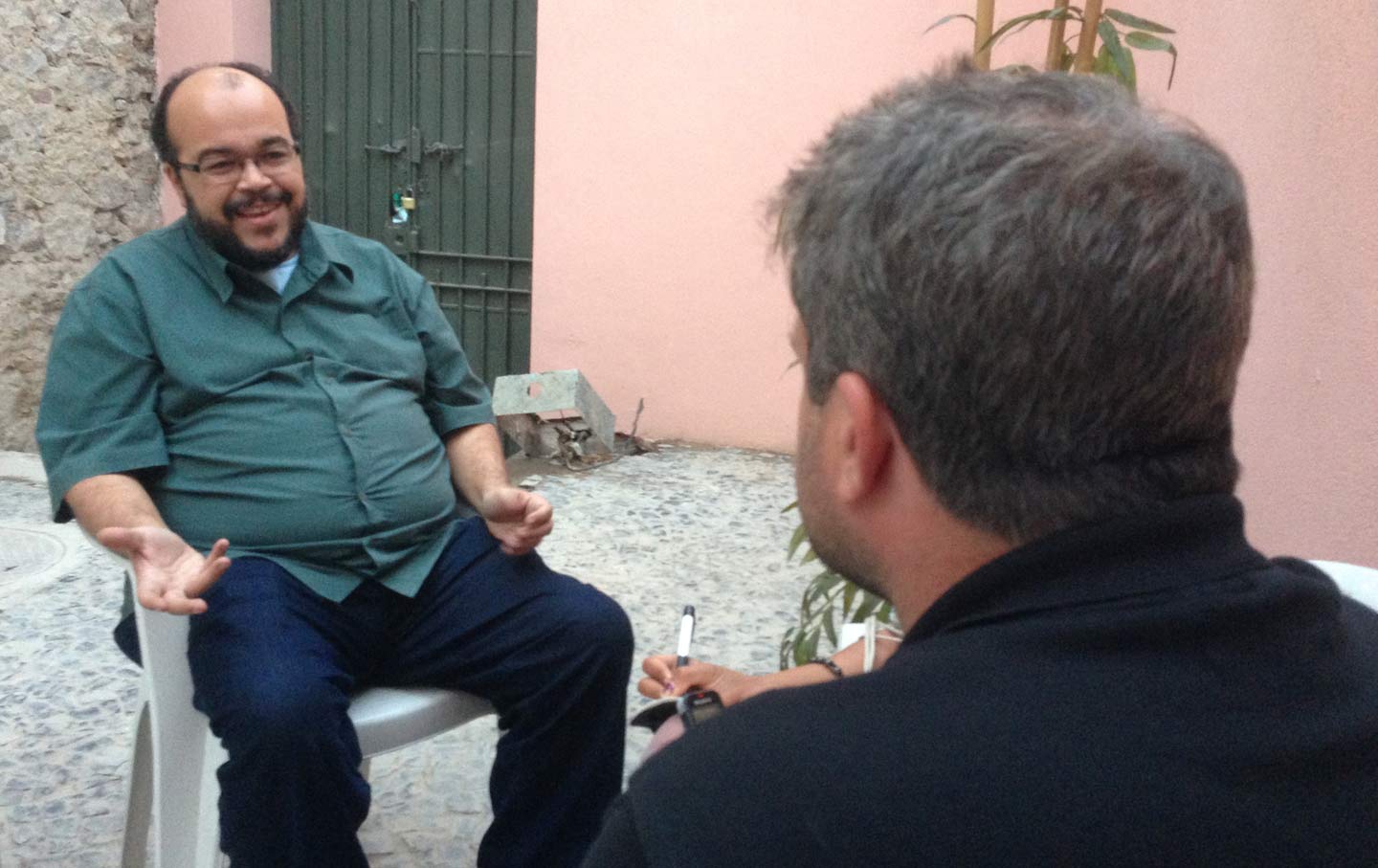 Renato Cinco has been involved in politics since he was 12 years old, agitating for change during the last days of Brazil’s military dictatorship. His grandfather was part of the Brazilian Socialist Party, and tortured under orders of the country’s longtime dictator Getúlio Vargas. Politics was always a part of his life.

In 2014, he entered politics in the movement to legalize marijuana. Cinco had been organizing the Marijuana Marches for years and faced decades in prison on the accusation of of “being an apologist for drug trafficking.” After being cleared of all charges, Cinco won a seat on Rio’s city council as a member of the Socialism and Liberty Party (PSOL). He has since become a leading campaigner on a host of issues, from LGBT rights to reproductive freedom to anti-racism.

He has been a leading critic of Brazil’s hosting of the 2014 World Cup and the 2016 Olympics and is currently running for reelection. I sat down with him to discuss the politics of the Rio Olympics (translation provided by Stephanie Reist).

Dave Zirin: How has the Olympics played out as a campaign issue for you?

Renato Cinco: Even before the World Cup and the Olympics, we were part of a group that was called the Social Forum Against the Pan American Games [held in Brazil in 2007] that united different social movements and members of universities who were defending the rights of people who would be most affected by the Pan American Games.

When the country put in the bid for the World Cup, immediately in all the cities where there were going to be events, they formed popular committees against the World Cup. In Rio it was both the World Cup and the Olympics. I was the representative at the national level for the State of Rio when there was the first union of all these different committees.

We had many criticisms of the Olympics as a project, especially because they followed this logic of expansion away from the city where there’s very little infrastructure and continued this historical pattern of rich occupation of the Atlantic coast of Rio. So it uses public money to finance this expansion into these zones and very rich real-estate speculators benefited from this use of public funds.

For example, the Olympics park, the golf course, and the Olympics village were all built in [the neighborhood of] Barra—originally a very green area. It was a public space and the territory was sold to these construction consortiums at under market value. We just marched before the opening ceremonies against these priorities. Unfortunately, it ended in violence where the police threw a type of tear gas that I hadn’t ever experienced before.

As a city councilperson, have you also looked into any corruption around the bids with regards to Olympics construction?

Oh yes. All the firms and the parties that have been shown to be involved in corruption at the national level are the very same ones operating here in Rio at the local level for the Olympics. It’s very difficult to believe that the [ruling party] PMDB and construction consortium Odebrecht weren’t operating under the same forms of corruption that have been revealed at the national level.

We know that these firms and the real-estate agencies are big donors to these political parties, so from the beginning that makes us suspicious. Furthermore, we know that the land was undervalued, but other factors are at play. The minister of labor investigated some of the construction sites and found that there were slave-like conditions in the construction of the athletic villages. And as for the building of the new Olympic golf course… the city didn’t need to do it. Rio already has two golf courses that could have been adapted very easily, but instead, the city went about constructing a new golf course in an area of environmental protection rather than updating these other preexisting golf courses.

Over 60 percent of people in Brazil are not happy with the expenditures of hosting the Olympics. Do you think this provides an opportunity for PSOL to expand its political message?

Yes. Many of the debates around the Olympics allow for a discussion of the city of Rio. So the problems of the Olympics actually allow us to tell the historical problems of Rio. The Olympics are being used to actually continue this logic of dividing the city that started in 1902 when the city and public officials used public power to push out poor people, to use public monies to benefit real-estate speculation. We did not know people would turn against the Olympics, but we were still pushing this discussion early on.

Initially, a lot of people were criticizing PSOL because they thought our critiques were coming just because we are an opposition party. Though we certainly could benefit from this election from telling the story of how the Olympics have been used to exclude people, our biggest electoral push has also been making sure everyone knows that we’re the only party that has representatives at every level of government that is in no way involved in the Petrobras/Car Wash scandal [the mass bribery scandals that have implicated hundreds of politicians, judges, and business leaders across Brazil’s political system].

PSOL started as a break from the Workers’ Party, known as the PT. The PT brought the World Cup and the Olympics here. And yet at the same time I know you have a position opposing the impeachment or the coup against former PT president Dilma Rousseff. How do you oppose the coup while also opposing the Olympics and the political agenda that the PT brought into the country?

In some senses, it is very difficult for us to explain how we can be both against the PT, the Workers’ Party, but also oppose the impeachment. However, it’s also in some senses easy because our whole position is that the coup process was anti-constitutional. Our analysis is that one of the reasons that this impeachment process was able to go forward was that the PT stopped being a party that was able to quell class unrest. That was seen especially with the mass 2013 protests [around the Confederations Cup]. For the right wing, because the PT was no longer able to quell the masses, PT stopped being useful.

What are the issues that you’re running on for city council right now?

The main campaign slogan has always been “Enough With the War Against Poor People.” The war on drugs isn’t a war against drugs, it’s used as a pretext to be against poor people. I believe that that very much stems from Brazil’s lack in our history of a US-style civil war in which part of it was this conflict between the industrial powers and the agrarian powers.

Here in Brazil, they very much are in cahoots with each other and have operated together, so there’s a colonial mentality that still exists. For example, 1 percent of landowners own 50 percent of all the land in Brazil. There hasn’t been an agrarian reform as there’s been in the US or Europe and so that means that people don’t have the right to life. There’s this colonial, feudal mentality in which the state can still openly kill people in the streets. Brazil has this mix of capitalism and this old-regime mentality which results in this war against the poor. In Brazil it’s as if General Lee and President Lincoln shook hands and founded the state. That has always meant that we have faced a united and strong opposition to change, but we are confident that we can win by campaigning as a social movement. We don’t have paid staff. We have people committed to the cause, and we can win.