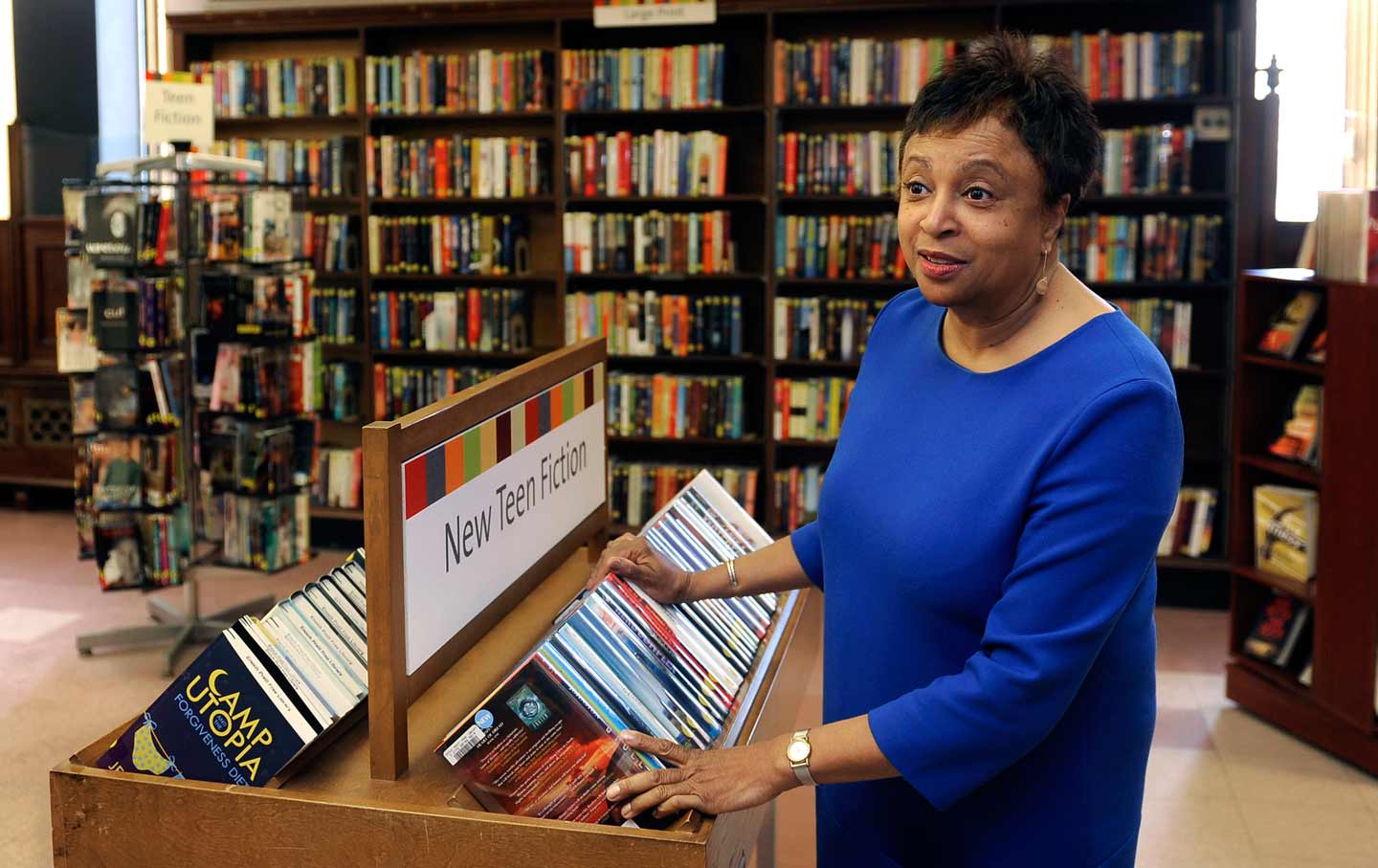 Carla Hayden, CEO of the Pratt Library, gives a tour of the library's central branch in Baltimore. (Barbara Haddock Taylor / The Baltimore Sun via AP)

President Obama made a historic nomination on Wednesday—not to the Supreme Court but to fill the top post next door at the Library of Congress. If confirmed by the Senate, Dr. Carla Hayden would be the first woman, and the first African American, to lead the 214-year-old library. She’s a career librarian, distinguishing her from the scholars that have traditionally been chosen for the post. She’s also a champion of privacy rights, and an outspoken critic of the Patriot Act.

Librarians Versus the NSA

As president of the American Library Association in 2003 and 2004, Hayden went head to head with then–Attorney General John Ashcroft over the post-9/11 surveillance law. Librarians voiced some of the earliest warnings about its implications for civil liberties, particularly in regards to Section 215—known then as the “library records provision”—which the government later relied on to justify some of the dragnet data collection revealed by Edward Snowden. Ashcroft, attempting to stamp out opposition to the act, accused librarians of “baseless hysteria.” He earned a sharp rebuke from Hayden, who wrote that she was “deeply concerned that the Attorney General would be so openly contemptuous” of librarians. Ashcroft called her to apologize, though he continued to deny that the law was being used to snoop in the stacks.

Hayden advanced the notion of librarians as activists, and of libraries as vital community institutions, not just repositories for books. “We serve the underserved,” she told Ms. magazine in 2003, when the publication named her Woman of the Year. “When libraries fight against the PATRIOT Act, or against [mandatory Internet filters], we’re fighting for the public. Most of the people who use public libraries don’t have the opportunity to buy books at a bookstore or on Amazon.com. What the library does is protect the rights of all people to fully and freely access information and to pursue knowledge, without fear of repercussion.”

Hayden began her career in Pittsburgh and Chicago. Since 1993, she’s run the Baltimore public library system, where she made expanding access to broadband service and digital technology a priority. She oversaw the development of a major renovation plan for the central library, for instance, that will make room for a robotics lab for teens. Obama emphasized her tech savvy in his announcement, as one of her primary duties at the Library of Congress will be rethinking the role of the world’s largest library in the digital age. Numerous reports have faulted the institution and its previous head librarian, James Billington, for failing to bring the library up to speed. Most of the library’s 162 million books, recordings, maps, and other documents have yet to be digitized. Hayden will also be wading into a fight over the mission of the Copyright Office, which is currently under the umbrella of the Library of Congress.

Hayden isn’t a Silicon Valley technocrat, however. She worked to make Baltimore libraries more than portals to information, digital or otherwise—as spaces for community conversations about race, and for obtaining basic services like after-school homework and job-hunting assistance. She’s been honored multiple times for her attention to serving disadvantaged communities. Last year, during the protests over the death of Freddie Gray, the city declared a state of emergency and shuttered its schools. Hayden decided that the library branch near the center of the demonstrations, across the street from a drugstore that was lit on fire, should stay open. The branch became “a refuge” for people in the area, Hayden later recalled. “[I]t renewed my faith, and my purpose about what libraries are about,” she said. “When they talk about the age of virtual libraries, the library as place… as place… matters.”

The Senate has already approved Hayden once, when she was nominated to join the National Museum and Library Services Board in 2010. It’s not clear yet whether Senate Republicans’ refusal to consider a Supreme Court nominee during Obama’s last year in office will affect Hayden’s confirmation. It’s not hard to imagine they might extend their argument that the president should not pick a justice in an election year to other types of nominees. So far, the GOP has said little about it. Republican Senator Roy Blunt, who chairs the committee charged with considering Hayden, said in a statement that he “look[s] forward to getting to know her and gaining a clear understanding of her vision for moving the library forward into the next decade.”