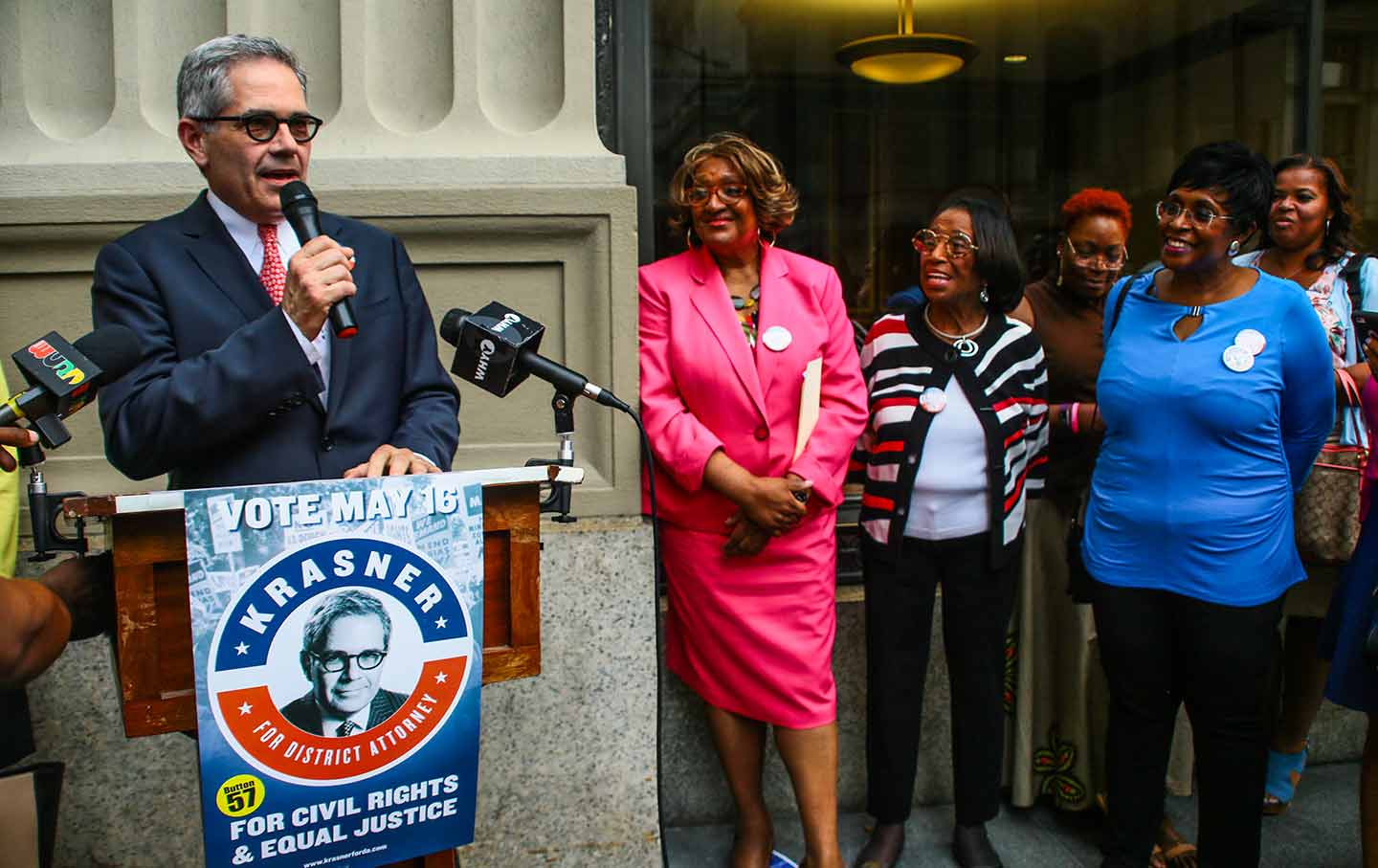 A group of ward leaders and elected officials endorse Larry Krasner for Philadelphia district attorney on May 1, 2017. (Kristi Petrillo / Krasner for District Attorney )

EDITOR’S NOTE: On May 16, Larry Krasner won the Democratic primary for Philadelphia district attorney, sweeping past the six other candidates in the crowded field to earn more than 38 percent of the vote. As news of his victory spread, progressives and criminal justice activists broke out the champagne to celebrate a triumph that had seemed unfathomable just a few months ago. "This wasn't just a primary victory. This was a revolution," proclaimed Philadelphia Daily News columnist Will Bunch in an ecstatic dispatch published the morning after the election. Next up, Krasner will face off against Beth Grossman, the presumed Republican candidate, in the November general election.

Ending mass incarceration begins at home, says Larry Krasner, a longtime civil-rights attorney and leading candidate for Philadelphia district attorney. Harsh sentencing laws passed by Congress and state legislatures set the stage for mass incarceration, and police make arrests on the streets. But it is prosecutors who decide whom to charge, what to charge them with, and, in a system that often resolves cases with guilty pleas, what sentences to seek.

“The truth is that the most important thing that a district attorney can do is exercise that 700-pound hammer that is discretion,” says Krasner, who announced his candidacy surrounded by a crowd of activists that included many former clients. “As Nancy Reagan would say, ‘Just say no.’”

In Washington, Donald Trump and Attorney General Jeff Sessions are endeavoring to resuscitate an embattled war on crime, criticizing states that have legalized recreational marijuana, falsely claiming that immigrants pose a criminal threat, and moving to pursue harsh mandatory minimum sentences for drug offenders with abandon. But in reality the federal government incarcerates a small fraction of this country’s enormous prison population. States incarcerate an estimated 1,330,000, compared to 197,000 in federal prisons. An estimated 630,000 more sit in local jails on any given day, often held pretrial because they cannot afford to pay cash bail.

In Pennsylvania, there were 49,916 incarcerated in state prisons as of April 30, 28 percent of them hailing from Philadelphia. The Philadelphia Prison System, the local jail, currently holds roughly 6,600 adults.

Krasner pledges to fight the system by feeding it less: prosecuting fewer cases, ending cash bail, and refusing to bring cases to trial that stem from illegal searches. He also pledges to prosecute police misconduct, cease the seizure of assets of people who have not been convicted of crimes, and give people with a strong claim that they were wrongfully convicted a chance to prove their innocence. For Philadelphia—a city of with high rates of incarceration and homicide where police misconduct and abuse are a regular feature on the evening news—it would be a sea change.

Krasner, one of seven candidates in a tossup race for the May 16 Democratic primary, would not make for a typical district attorney. In fact, it is an office that he has spent his entire career fighting, going after abusive and lying cops, and representing protesters from Black Lives Matter, Occupy Philly, and ACT UP. In recent years, criminal justice–reform candidates have won races in other cities. But Krasner may be the first running a major campaign so explicitly aligned with social movements and so vociferously opposed to mass incarceration.

Enacting reforms, however, will be easier said than done.

He plans to reduce the city’s jail population by eliminating cash bail and by diverting low-level offenders away from incarceration entirely. But saving significant funds that can be reinvested into public education and other services, as he would like to see happen, will require a significant decline in the prisoner population—steep enough to cut costs attached to paying for prison guards and facilities. Violent crime remains a third rail for reformers, and any effort to shorten sentences for people convicted of violent crimes—offenders who make up a large part of the state prison population—could stoke controversy even in a more progressive political climate. And, critically, his election may prompt the cops and prosecutors with whom he would work into open revolt.

“They’re all worried about it,” said A.J. Thomson, a former assistant district attorney who was fired amid a controversy over the office’s handling of a cop who had admitted to committing perjury. People running the office, he said, “will fear someone who’s not on that team getting in there and saying whoa, whoa, whoa… what’s going on here?”

He hopes either Krasner or Joe Khan, a former city and federal prosecutor in the race, will win and “look at the office and give it the enema that it needs.”

John McNesby, president of Fraternal Order of Police Lodge #5, described the very prospect of Krasner’s candidacy as “hilarious.” There’s no love lost. When the FOP endorsed an opponent in the race, former city managing director Rich Negrin, Krasner called both “authoritarian,” and said that the move was no surprise given that the union had endorsed Trump.

But what would have been a marginal protest candidacy just a few years back now has a serious shot. That’s thanks to a grassroots mobilization underway, and also to Philadelphia Justice and Public Safety, a political-action committee backing Krasner that has received a reported $1.45 million from liberal financier George Soros. Remarkably, Krasner has not received much in the way of soft-on-crime attacks—a message that once would have resonated in a city where gun violence persists in heavily segregated and deeply impoverished black neighborhoods.

What’s changed is “the public attitude on criminal justice, and the understanding that a lot of what we’ve done over the past 25 years has not worked,” said Philadelphia civil-rights attorney and University of Pennsylvania Law Professor David Rudovsky, pointing to the growing visibility of wrongful convictions, a failed war on drugs, and prosecutorial and police misconduct. “All of those factors change the narrative.”

It’s hard to overstate the brokenness of Philadelphia’s criminal-justice system. In March, District Attorney Seth Williams was indicted on federal fraud charges after allegedly taking gifts in exchange for promised favors. Additional charges were filed this week. But The Philadelphia Inquirer, which often reports on criminal justice as though it’s a political beat, has for years missed the bigger story on Williams: He ran as a reformer but has fought reform at most every turn. He long failed to staff his own Conviction Review Unit, fought the Pennsylvania Innocence Project in court, resisted marijuana decriminalization, put cops on the stand who then committed perjury, and ran a massive civil asset–forfeiture program.

Williams, who remains in office despite his law license’s being suspended, casts a shadow over the race. The Inquirer editorialized that the DA’s “good works have been obscured by Williams’ arrogant acceptance of” gifts. But what’s actually been obscured, in no small part by the local press, is that Williams was an unconverted war-on-crime prosecutor woefully out of step with his time and his city. What the Inquirer missed, Krasner has picked up on. His win would be a striking repudiation of Williams and the system that he led. Rudovsky said that a candidates forum he moderated sounded “more like a debate for the office of public defender than DA. They were each trying to out-progressive the other.”

There is no public polling for the race. But Krasner is considered a front-runner, drawing support from a multiracial coalition of activists as well from influential black powerbrokers. His campaign, like that of current Mayor Jim Kenney, will require scrambling the racial math that for years was thought to govern city elections. Krasner, like Kenney, is white, but has a record and platform that is attractive to the communities most devastated by mass incarceration.

“He has fought and continues to fight the racist nonstop police brutality epidemic,” Michael Coard, an outspoken black attorney, wrote in The Philadelphia Tribune, the city’s black newspaper. “He’s also the blackest white guy I know.” Multiple labor unions have also offered their support, as have progressive groups like Our Revolution, the organizational successor to the Bernie Sanders campaign.

If Krasner wins the primary on Tuesday, he may just get a shot at transforming the criminal-justice system as we have known it. The election, says Krasner, “will mean getting a truly progressive administration in the DA’s office with a mandate.… What this election means is that all kinds of people who are truly progressive can jump in and run for office, all kinds of offices, and they can win.”