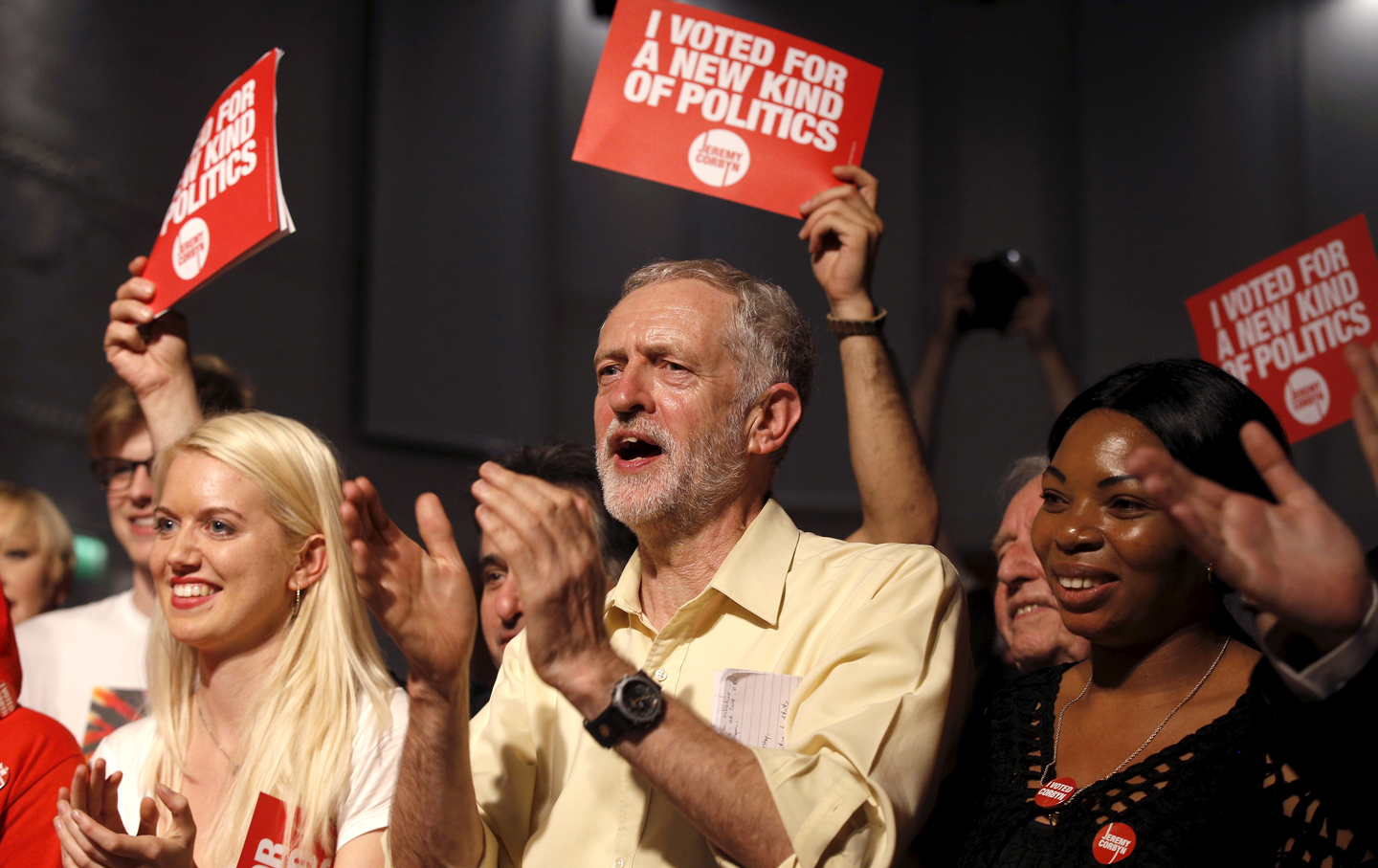 Jeremy Corbyn applauds the audience and supporters during a rally in London. (Reuters / Peter Nicholls)

The establishment’s Plan A had been to stop Jeremy Corbyn. Up against three technocrats of the political center, Corbyn—who has run nothing bigger than the planning committee of a town council, though he has been a member of Parliament since 1983—won 60 percent on the first ballot, becoming the new leader of the UK’s Labour Party.

Plan B had been to hamstring Corbyn if he won by withholding support from Tony Blairite, centrist, pro-Nato, pro-business members of Parliament. Corbyn would be the floundering figurehead for 18 months before returning to business as usual. But 60 percent—from a membership swelled to half a million during Corbyn’s barnstorming summer—gives you a crushing mandate.

Sixty percent gives you permission to appoint the hardest-left MP in Parliament as your shadow finance minister and put a vegan in charge of handling the farming lobby. Even as the right-wing press derided the mild-mannered and bearded Corbyn as a “weaponized lentil,” the shock was setting in. Corbyn wants to nationalize the railways and energy companies, use quantitative easing to fund public spending, scrap Britain’s nuclear weapons and student tuition fees. He is a lifelong anti-imperialist and supporter of Palestinian liberation. For the first time in 80 years, the establishment does not control the Labour Party.

Even the left in the party is stunned. Corbyn made the ballot paper only because politically hostile MPs sensed—rightly—that, without a token left-wing challenger, a contest between dull but worthy technocrats would be a prelude to five years of decline. When I spoke to a senior Corbyn aide, right after the nominations closed and three months before the election, he said, “Our aim is to come second; to carve out a space for the left and the unions.”

But everybody had misread the political dynamics. Once you read them properly, the implications are far-reaching for British politics.

Labour lost disastrously to the Tories in May 2015 because three fault lines had appeared in left-wing British politics. A left-leaning, populist Scottish National Party captured Scotland, wiping out Labour in its traditional stronghold. On top of that, nearly 4 million people voted for UKIP, a right-wing party opposed to membership in the EU and to immigration; though it drew support from discontented conservatives, UKIP was now taking millions of votes from working class Labour towns. Finally, more than a million people voted Green in May—and this after celebrity Russell Brand made a last-minute plea for them to back Labour.

Each of these events had been clearly signaled through prior local and European elections. Each has a socio-cultural driver.

Scotland’s nationalist party has acted as a left social-democratic force, protecting free social services and low student fees while Labour didn’t and opposing nuclear weapon development while Labour didn’t. At the same time, it has ridden on the back of a radical renaissance in Scottish cultural identity which brought 80–90 percent turnouts from working-class projects in the 2014 independence referendum.

UKIP drew support from both Labour and the Conservatives because it was tapping discontent within a demographic present in both parties: small-town, older, mostly white, with the lowest educational qualifications and a working-class outlook. These are people to whom globalization has delivered the atomization of their communities, the collapse of skilled manual wages under the impact of migration, and a closed door to political representation. Virtually nobody in official politics or corporate life uses the language of this group, and suddenly UKIP did.

The Greens, though latecomers to the breakup of British politics, have also drawn support from a readily identifiable tribe: graduates, including many female activists and leaders, strong in university towns, in constant online communication. They saw Gaza bombed while Labour’s Blairite faction leapt to the kneejerk defense of Israel. They saw Labour blow hot and cold on renewable energy, never clearly opposing the fracking boom that the Conservatives were trying to promote. They saw Ed Miliband, Labour’s hapless leader between 2010 and 2015, continually torn between his own left instincts and the pressure of the party’s right.

As Labour’s traditional constituencies became more disillusioned, the party leadership put on blinders. To maintain the party’s support for austerity lite, when its core membership is drawn from the public servants and trade unionists who have most to lose from austerity, requires a vigorous discipline first and intellectual curiosity second. And the Blair years had left a legacy of centralized control: the party conference powerless, selection mechanisms for members of parliament pliant to the will of the party headquarters, mild dissent on any issue an instant ticket to oblivion.

All of these flaws were dramatized during the Scottish referendum. Though Labour “won” that referendum, it did so by sacrificing the bulk of its political support in Scotland. Labour leaders became the front men for the cross-party campaign to keep Scotland in Britain, joining in the fear-mongering and coordinating threats by businesses to quit the country. By the end of it, the party looked on the wrong side of a left/right cultural divide, and its electoral support plummeted.

The defeat in May 2015 catalyzed the Corbyn movement because it was strategic. First, because Labour can only ever gain power by mobilizing the ex-industrial areas of Britain: Scotland, Wales, northern England, and the cities. Once it lost Scotland, it lost the ability to govern without a Lib Dem and SNP coalition, and English voters knew it. Second, because the people who mattered—the party membership and the union affiliates—realized something the leadership hadn’t: You can’t appeal to white social conservatives and networked youthful idealists at the same time unless you offer them something radical. Corbyn represented a clear candidate of the progressive salariat and multi-ethnic poor, but stood a chance with his straight-talking homespun style of appealing to those working class waverers the technocrats had lost.

The outcome is so totally surreal the British media can only comprehend it through outrage. Corbyn floats the idea of a faith minister—the tabloids run with the headline “Minister for Jews.” Corbyn’s standing in silence for the national anthem, instead of belting out the words, becomes an act of treason. He makes a speech but, because he refuses to embargo the notes, every departure from them becomes a “gaffe.”

By the end of Week Zero of Corbyn’s leadership, dubbed a “car crash” in newsrooms and political think tanks, one thing has become clear. Corbyn’s project can survive only as an insurgency: not just against a hostile press but against the majority of his parliamentary colleagues, most of his local government leaders and the accepted niceties of political life. Though he has hit the studios battling for his own ideas and policies, he has accepted that existing party policy stands until he can change it democratically, which may take time and—regarding nuclear weapons, for example—will be very hard to get past the unions who backed him.

Even if it fails, the insurgency may have permanently altered Labour’s political dynamics. Even if a new generation of Cold War bruisers from the trade-union right could be assembled to suppress the left, even if a generation of bright neoliberals could be found to replace the dull ones, the UK establishment would still tell itself: This is a party of which we once lost control.

If it does survive it will be because of the youngsters in hi-vis vests. At every Corbyn rally they are there—students, ex-students, young union organizers, veterans of the eco-movement and Occupy. They are quickly populating the TV studios as broadcasters hunt for Labour pundits who actually support Corbyn.

This is a generation for whom political studies means reading Foucault, not the biographies of prime ministers or handbooks of parliamentary procedure. Few have any desire to become the new MPs, spin-doctors and strategists Corbyn needs. And the man himself is happier on a demo than in the House of Commons.

So Corbynism, while it lasts, will be a form of anti-politics. Though it has brought traditional social democrats close to despair there is a method in it.

The only thing that could reunite the lost tribes of Labour—the white workers, the salariat, the Scots and the Greens—is the radical rejection of everything that the party, and the political system, has become. The question is, can he achieve that while maintaining the loyalty of Labour’s centrist voters, quelling the Blairite revolt, and avoiding presentational catastrophe?