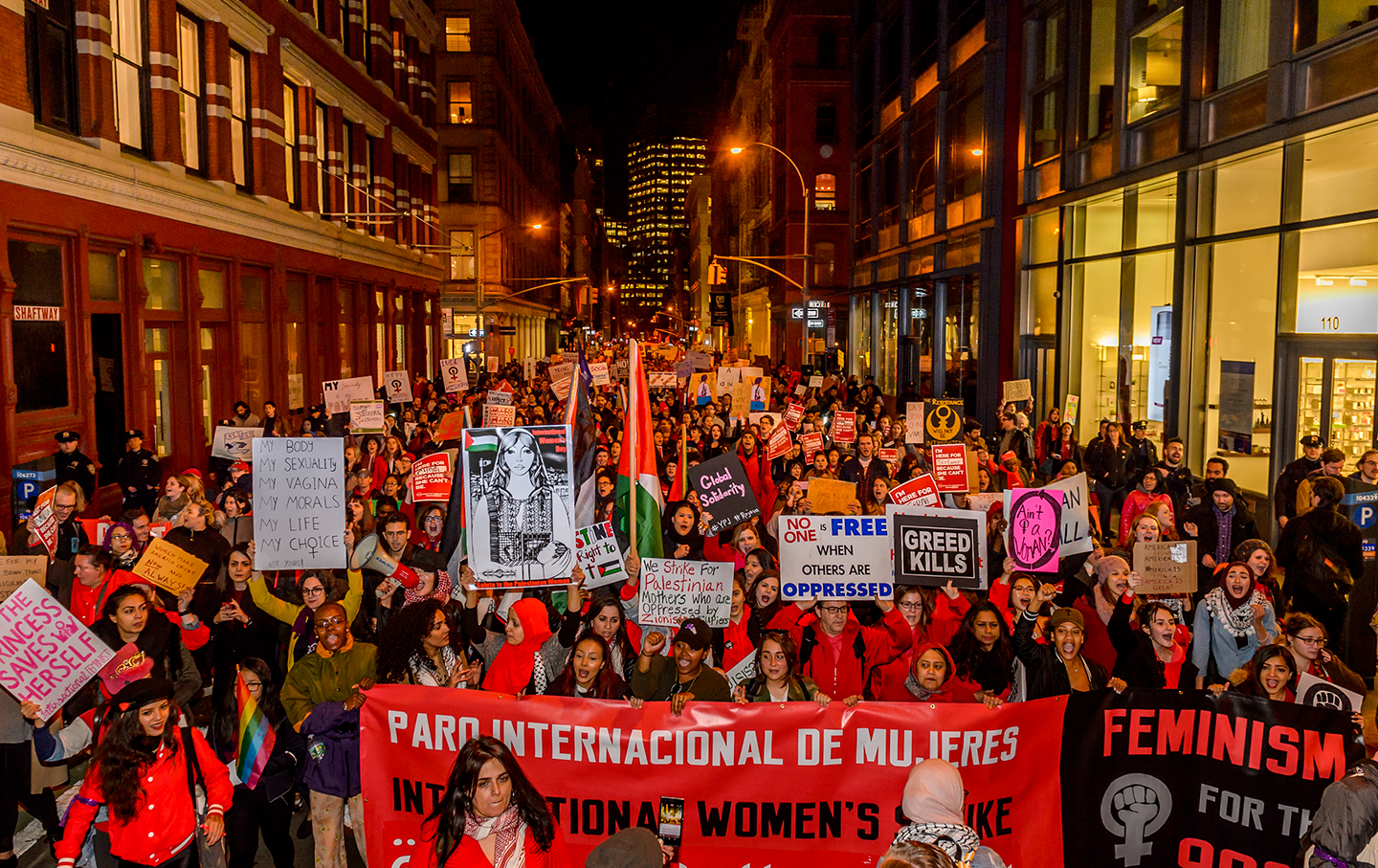 Women and allies fill the streets of New York City during the International Women’s Strike on March 8​, 2017. (Sipa USA via AP)

On Wednesday, women around the world gave themselves a day off… from the system. Not that a woman’s work is ever done. But for one day, to mark the International Women’s Strike, women in dozens of cities in the United States and across the world redeployed their productive energies to fighting for gender and economic justice.

Women downed their tools on multiple fronts. Mothers outside the waged workforce restructured their schedules to share the burden of care work. Others refrained from shopping, or participated in local direct actions, or undertook the challenge of starting provocative conversations with neighbors about the real value of women’s work.

Reviving the spirit of the event that inspired the original socialist International Working Women’s Day—the massive garment workers’ strike led by immigrant women in New York—women yesterday found creative ways to rupture the patriarchy. They also showed that, contrary to dismissive claims that taking action for women’s rights is just for the privileged, activists in 2017 come from all walks of life, including nannies, fast-food and retail workers, teachers, and “unorganized” microtaskers.

No woman was left out at the march in New York City: Professors pushed for a “sanctuary campus” for immigrants at regional colleges and universities, and sex workers and bodega owners marched arm in arm for environmental, gender, and racial justice under the banner of “feminism for the 99 percent.”

Organizer and Arab-American Palestinian-rights activist Suzanne Adely said the rally upheld a “tradition” of women “using their economic power to build a social movement that declares that the liberation of women can only come…when we stop wars, when we stop violence against black women and black people, [and] come together to learn how to work together towards building real liberation for women and for all people.”

Octavia Kohner, a trans worker who recently launched a union at the Babeland sex toy boutique, spoke about the need for intersectional resistance instead of establishment feminism. Her fellow workers struggled for a contract that would strengthen the staff’s civil-rights and labor conditions, she recalled, against vocal resistance from nominally liberal (but profit-minded) bosses.

“Boss feminism is denial, it is deception, it is self-interest over solidarity,” Kohner told the crowd at Washington Square Park. “That I am a woman did not matter…. What did matter is that the workers came together, we agitated, we educated…. When we are united as an intersectional workforce—when the sex workers, when the trans women, when the women of color, when the disabled women…when we center those most marginalized in our community [and] put their voices forward, when our goal is not only to help them survive but thrive—is when our feminism is a success.”

Rabyaah Althaibani, a Yemeni-American family-business owner, highlighted the link between feminist success and racial justice in the bodega strike, in which local grocers closed shop for a day to protest Trump’s original Muslim travel ban, right before it was suspended by the courts.

“Following the great success of the bodega strike, thousands of Americans throughout the country took to the streets and strikes were organized in other major cities and towns…. Strikes work, boycotting works, protests work.” But her community’s work remained painfully unfinished; her husband is unable to enter the country because of Trump’s policy, which was recently reissued with slight amendments. “I have constitutional rights, as an American, to have my husband here with me in my life, just like any other American,” she said, “and I demand it.”

The New York march route touched historic sites of struggle, from the Triangle Shirtwaist factory, where women workers burned and rebelled a century ago, to Stonewall Inn, where the first generation of queer-rights activists exploded against police oppression. At a time when even Ivanka Trump calls herself a feminist, these women were showing that working women still can’t get a break.

Safiyyah Muhammad, a mother of five and peer counselor for families with children on the autism spectrum, painstakingly planned her strike day, making sure her kids were prepared for a day without mom to fetch them from school or clean up after them, and steel herself for the challenges ahead for women’s rights under Trump.

Muhammad drove a long way to the DC arm of the women’s-strike march, from her home in Newark, where she helped lead a campaign for a local paid-sick-days law. She was politicized by family needs: Years ago she had to drag her sick child with her to her retail workplace after being warned she’d lose her job if she stayed home to nurse him. Her boss denounced her son’s vomit on the floor as a “workplace hazard.”

“I said, ‘A worried mother is a workplace hazard,’” she recalls.

Now a nationwide campaigner with the advocacy coalition Family Values@Work, Muhammad says a policy for paid leave “makes common sense…. It makes financial sense, and it makes spiritual and health sense, for people to be afforded the opportunity and the right to…not have to be conflicted to take care of their families.”

In DC, Muhammad arrived to the second major feminist mobilization since the inaugural protest of the anti-Trump resistance in late January. Immediately after the women’s march in late January, as if to spite feminists, Trump signed a global anti-abortion executive order, launched a crackdown on immigrant mothers and children, and began to dismantle poor women’s health care. This week, the voices of the international women’s strike returned with a vengeance.

Because of the gag rule, care providers across Latin America and the Caribbean—where severe abortion bans have been imposed over the years—now must choose between affiliation with Planned Parenthood’s network and an ideological litmus test, in which they can only maintain their US funding by agreeing not to provide comprehensive reproductive health services. Although she works with the affiliate in Puerto Rico, which as a US territory is not subject to the gag rule, she says Trump’s pending overall cuts to local aid money and vicious austerity policies will cripple health-care services, and especially endanger reproductive-health care, because Trump has emboldened conservative political factions on the island with his oppressive rhetoric. Since providers have often campaigned for reproductive-rights reforms, the administration could now effectively punish their advocacy with billions in funding cuts.

Noting recent incidents of vandalism against providers in Latin America, Vicente says, “We’ve been criticized, we’ve been attacked in public…. So I think that the gag rule has also a cultural impact on the fundamentalist groups that are anti-abortion and anti-women.”

Now that Trumpism is bringing the full weight of such global injustice to bear on women, half the world’s work lies ahead. For moms like Muhammad, the struggle continues well past this Wednesday. But when she left her work behind that day to march, she reported to work in a new way.

“The world is used to women showing up,” she says. By withholding her labor for a day, “we get the chance to not only show up, but we get to show out…speak up and speak out, and build awareness of the importance of coming together…. The sacrifice is for unity.”

The harmony of community, labor, and family is the real work-life balance in which the future of women—and work—now hangs.