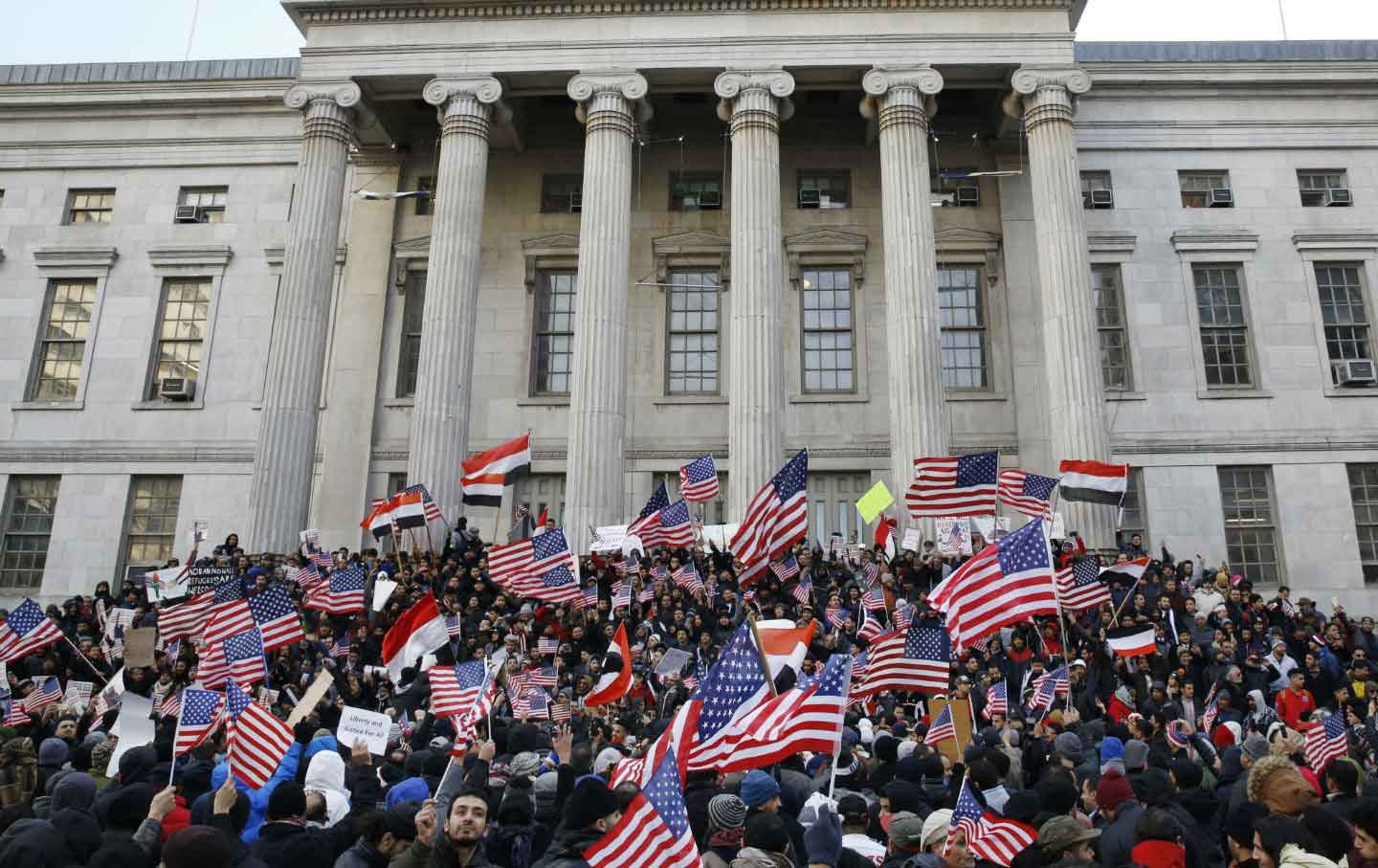 Muslims, members of the Yemeni community and others gather on the steps of Borough Hall in Brooklyn, New York, on February 2, 2017, to protest President Donald Trump’s temporary travel ban on citizens. (AP Photo / Kathy Willens)

If the defining conflict animating Donald Trump’s brand-new administration has been who does and doesn’t belong in the United States, Yemeni Americans living in New York City, and their allies, gave their answer Thursday night. Thousands descended on Brooklyn’s Borough Hall hours after hundreds of Yemeni-owned bodegas shut their stores in a citywide strike to protest the Trump administration’s executive order on immigration.

The protest began just as the sun was setting in the packed Downtown Brooklyn public square. Protesters waved enormous American, Yemeni, Sudanese, and Palestinian flags. At 5:16 pm, an imam led the crowd in sundown prayer before New York City public officials and advocates addressed the crowd.

The huge, peaceful prayer in a New York City public square was itself a rejection of Donald Trump’s political philosophy. At the protest, American flags easily outnumbered flags of any other country, and the crowd broke out spontaneously in ebullient chants of: “USA! USA! USA!,” imbuing the nationalistic chant with new meaning.

“I have been in America 25 years,” said Mansour Alhami, 44, who runs a bodega on 119th St. and Fifth Avenue in Manhattan. He shut down his store for the evening to join the protest. “We’re here for peace. I have US passport, I am Yemeni-American.” But, he said, his wife, daughter, and son are back in Yemen where, Alhami said, war there has made life too unsafe for them. He held a sign that said the unconstitutional president—what next.

The Trump administration’s Muslim ban, barely a week old, set off immediate protests and courtroom battles around the country. The executive order bars people from seven countries—Yemen, Iraq, Iran, Libya, Somalia, Sudan, Syria—from traveling to the United States for 90 days, and suspends the admittance of refugees for four months, while indefinitely banning Syrian refugees. While temporary injunctions from federal judges and protests have forced the White House to backtrack some portions of its sweeping policies, the ban has sent deep ripples of fear through Muslim communities.

“My children are back home,” said Salah Mosla, who’s 53 and Yemeni and has lived in the United States for 22 years. He works in a deli in Harlem and has been trying to bring his children here for the last decade. “They’re in a lot of trouble now. My mother lives in Yemen, she’s sick and I usually go see her for a few months, now I can’t go. I don’t feel good,” Mosla said.

He has a green card, and while in recent days the White House has clarified that legal permanent residents are exempt from the ban, he still doesn’t feel safe leaving the country. But Mosla says, “This is my country. I love this country.”

Bodegas are New York City anchors, reliably open at all hours of the day and night, no matter the holiday or weather. Their coordinated shutdown was a rare political rebuke. “The people you see here? They are business owners,” said Zouleikha Ben, 60, of Staten Island. “What happens without them?”

Ben, whose family is from Algeria, said she came to the protest because, she said, Trump’s policies affect more than just people from the seven named countries who are currently banned. “It’s unfair to everybody, not only Muslims.” She’s lived in the United States for over 20 years. “Even during 11th of September, this didn’t happen. It’s really different now and it’s crazy. I don’t think this is a democracy we have been fighting for.”

Ben has raised seven children in New York, and her three oldest are studying for their PhDs in pharmacology, biochemistry, business management, she said. “We came to this country to build it. We are not a burden. We came for education, we came to build. And we are here to stay.”

Not everyone at Borough Hall was connected to a bodega. Issam Hassan, 26, was born and raised in Brooklyn and is a third-generation Yemeni American. He works in sales.

“We are American as much as anybody else,” Hassan said. His wife is a green-card holder, and Hassan shook off his disbelief at what could have happened to her if they had gone on an overseas vacation like they’d been planning. He said his brother’s wife is in Yemen right now. He had been applying for a visa for her, but that process has been halted.

“She’s in the capital [of Yemen] where there’s intense warfare, and every day is a gamble. Every single day she’s there longer than she has to be is one more risk that we’re not willing to take,” Hassan said.

He said he came out to the protest to say, “We’re here to make America great again—the right way.”