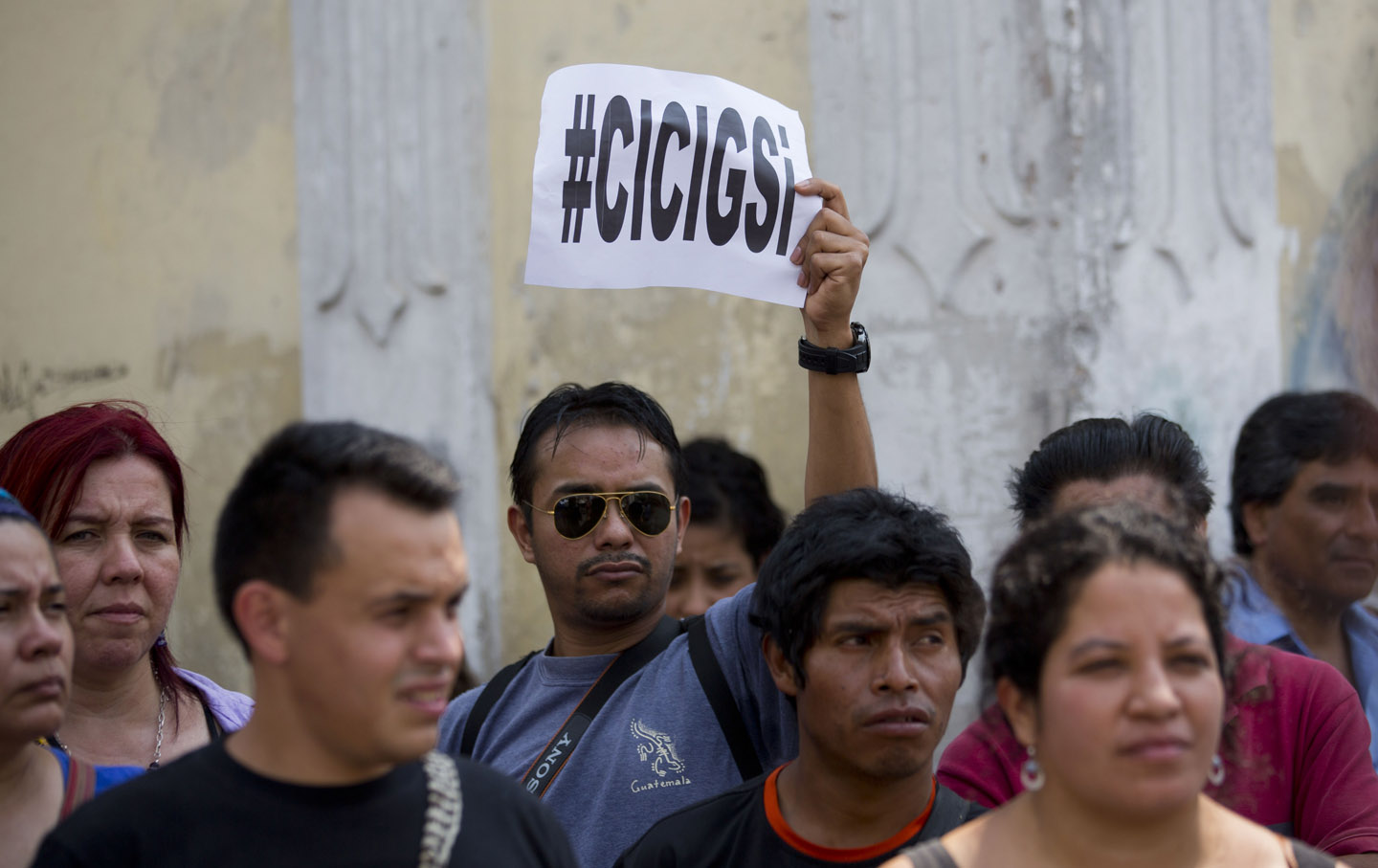 A man holds a sign in support of the UN International Commission Against Impunity, or CICIG, during a protest in Guatemala City on April 20, 2015. (AP Photo / Moises Castillo)

The UN has often been viewed as a do-gooder organization, an arena in which nations debate issues, a place where conflicts can hopefully be settled—but it has never been seen as a direct intervenor in the domestic affairs of its member-states. Yet, in Guatemala, for the past eight years, the UN has operated a body called the International Commission Against Impunity in Guatemala (CICIG, the Spanish language acronym) that has directly reshaped the governance of that state—an unprecedented action by the UN that has led to the prosecution of one former Guatemalan president, the resignation of another, the departure of a vice-president, the investigation and trials of a cabinet minister and a police director, as well as the detention of a host of other political criminals in the land.

How did this come about? The UN’s commission grew out of the signing of the 1996 peace accords that brought to an end to Guatemala’s long and bloody civil war, which lasted from 1960 to 1996 and resulted in the death of over 200,000 people. The settlement, negotiated by various UN emissaries, simultaneously sought to end the role of various illegal militias, death squads, drug gangs, and other rogue elements in Guatemala. But for years afterward, clandestine forces in the society persisted. Finally, in 2007, the Guatemalan government, under pressure from civic groups, asked the UN to establish an hybrid independent investigative body to lend its resources to the country’s attorney general and the nation’s security offices for the training of prosecutors and the setting up of police squads to crack down on iniquitous enterprises. In August 2007, the Guatemalan congress ratified the accord.

Today the CICIG, headed by Ivan Velasquez Gomez of Colombia, operates under Guatemalan law and works on a $12 million budget. Originally, it had only a two-year mandate, but Guatemala has renewed its term four times.  Its most important power is to present criminal complaints at any time. In addition, the CICIG has assisted Guatemalan judicial officials in setting up various internal units to track down and uncover nefarious rackets of various sorts. It has helped, for example, to restructure the Analysis Unit of the public prosecutor’s office to adopt new investigatory methodologies, including training a novel police corps, to probe entire criminal networks rather than pursue case-by-case prosecutions. It coordinates with Guatemalan courts on search warrants, summons, subpoenas, witnesses, experts to gather evidence for various cases. It has championed the use of legal wiretaps to intercept the plans of murderous outlaws. It has founded witness-protection programs. Finally, it has recommended legislative reforms—for example, most recently, in refashioning the banking secrets law.

Among its varied cases, it has taken on investigations of the murders of union members, activists, and human rights defenders. It has launched probes into extrajudicial killings by secret organizations that have ties to security institutions.  In one of its most notable actions, it pursued a former Guatemalan president, Alfonso Portillo Cabrera, who was accused of stealing $15 million from the Ministry of Defense. At one point Portillo fled the country, and a CICIG operation followed him and captured him in 2010 on Guatemala’s Caribbean coast while he was attempting to enter neighboring Belize, returning him to Guatemala. However, a questionable judicial ruling back in Guatemala let him off. Still he was later extradited to the United States for laundering $70 million through US banks and jailed.

Most recently, along with the Guatemalan public prosecutor’s office, the CICIG uncovered a tax-fraud ring within Guatemala’s tax-collection agency dubbed “The Line” (La Linea) through extensive monitoring of phone calls and emails of suspects. This secret network pilfered some $120 million in revenues from the country’s customs offices by arranging for companies that import goods to give 30 percent of the standard import duties to the wrong-doers in exchange for keeping 30 percent of the taxes for themselves, and paying only 40 percent of the duties to the state.

The investigation showed that Guatemala’s vice president’s personal secretary had run the operation. As a result of those revelations, widespread protests erupted all over Guatemala. Soon the vice president resigned. Next the country’s president, Otto Pérez Molina, a controversial former general rumored to have been part of Guatemala’s genocidal “dirty wars” against Mayan Indians, was implicated, accused of netting $3.7 million in bribes. He denied the charges but also stepped down.  The scandal, which led to the arrest of 21 other people, tarnished the leading candidate for Guatemala’s 2015 presidential election, Manuel Baldizon, a right-wing businessman close to Pérez Molina. He subsequently failed to survive a September 6 runoff for the presidency. The final two candidates for the October 25 presidential runoff are a former TV comedian, Jimmy Morales, a conservative with ties to the military; and the center-left Sandra Torres, ex-wife of former President Alvaro Colom, known as an abrasive personality but a stolid social reformer.

Despite its accomplishments, the CICIG remains in peril. Even at the time of its creation, some in the Guatemalan congress had fought to kill it. This year Pérez Molina himself tried to shut it down but he was stopped by an enormous outcry from outside groups, the UN, and the US government, which helps fund the body through voluntary contributions (amounting to some $30 million over an eight-year period) funneled through a UN Development Program Trust Fund and had threatened to withhold a portion of a new US $1 billion aid package to Central America had the commission been terminated. So the CICIG’s mandate was renewed. In any case, the body’s work remains heavily dependent on the cooperation of Guatemala’s judicial authorities. If those departments do not provide assistance, the CICIG’s efforts can be stymied.

For all of this, this UN agency has shown a remarkable resilience. Some observers, ranging from Vice President Joe Biden, who is Obama’s emissary to Central America, to Associate Professor Mike Allison of Scranton University, author of the Central American blog, are even suggesting that the CICIG model might be transferred to other Central American countries which face domestic corruption and lawlessness. Still, this can only happen if a nation requests such UN assistance.  Nonetheless, the commission remains in the UN’s toolbox as one of its most innovative programs to help states around the planet to uphold the rule of law.