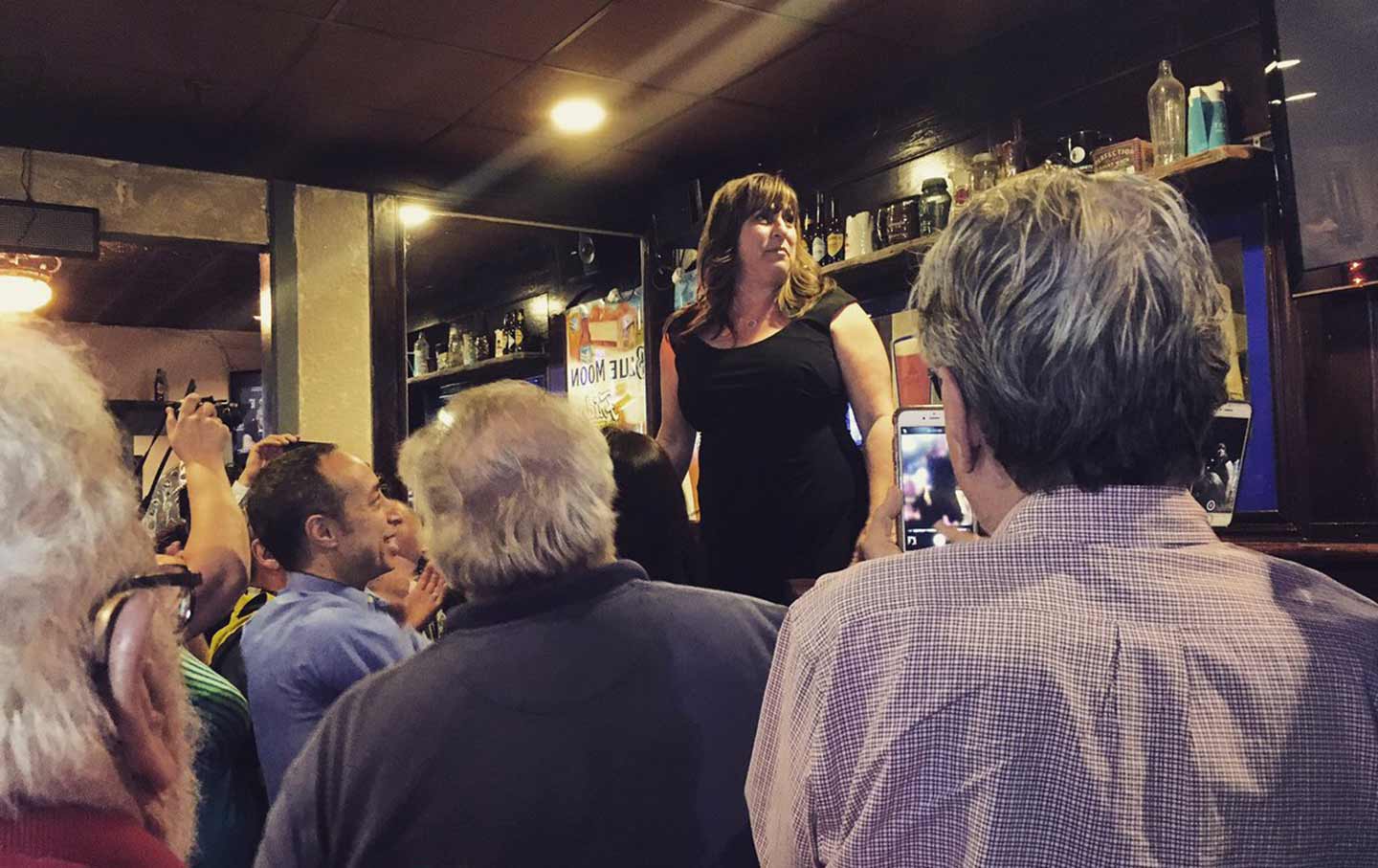 Christine Pellegrino did not just declare victory after a remarkable special-election win that saw her flip a historically Republican New York State Assembly seat to the Democratic column on Tuesday. The elementary-school teacher turned candidate announced that Long Island was sending a message that will resonate far beyond a legislative district that backed Donald Trump last fall but that has now will be represented by a bold progressive activist.

“This is a thunderbolt of resistance,” announced Pellegrino, a union activist and 2016 Bernie Sanders delegate who had just won what was being described as a “stunning” victory. “This is for all the supporters and voters who understand a strong progressive agenda is the way forward in New York.”

Pellegrino is being modest. In combination with a New Hampshire special-election win on Tuesday (after which the state Democratic Party announced that “Democrat Edie DesMarais…became the first ever Democrat elected in Wolfeboro”), the New York result sends a national message.

These are places that Democrats must win to begin reversing the setbacks of 2016. On paper, they might look like hard places to prevail. As Newsday noted, “Typically, Democrats would hardly compete in the 9th, a horseshoe-shaped district on the Nassau-Suffolk county line that includes Massapequa, West Babylon, Babylon Village, West Islip and West Bay Shore.”

Trump did not just win New York’s 9th District in November. He swept it, with a 23 percentage-point lead over Hillary Clinton. In the same election, the veteran Republican legislator who held the seat was reelected with a 37 point lead over his Democratic challenger. The incumbent later stepped down, forcing the special election. Democratic leaders had been looking for a more predictable candidate, but Pellegrino and her backers elbowed their way into the fight.

Pellegrino, a founding member of the group Long Island Activists, which was “born out of the Bernie Sanders movement,” ran an edgy anti-corruption campaign that recognized the mood of voters who are frustrated with politicians of both major parties. “We’re sick and tired of the seemingly endless string of corruption scandals that flow from Albany,” said the candidate, who added, “I’m embarrassed to explain to my children every time another elected official or political party leader is arrested for corruption and abusing the public trust to line their own pockets.” Pellegrino talked up public education—while ripping into the standardized-testing schemes she has opposed for years as a leader of New York’s opt-out movement—and positioned herself as a passionate defender of the environment.

It worked. The progressive won 58 percent of the vote her conservative foe’s 42 percent.

The victory came on one of the Working Families Party’s “Resist Trump Tuesdays,” as the New York state WFP released a “New York Resistance Agenda” to united progressive forces around a plan to have “New York lead the way in protecting our rights, expanding health care, improving education, fighting climate change and strengthening our democracy.”

“The Trump regime is a threat to our democracy as well as the rights and well-being of millions of New Yorkers,” the party says. “While people across the country are fighting back, here in New York we have an opportunity to enact a Resistance Agenda into law to protect New Yorkers and model progressive governance.”

Christine Pellegrino’s progressive victory in what was supposed to be a solidly red district confirms that such a resistance, in New York and nationally, is not just necessary but politically realistic.