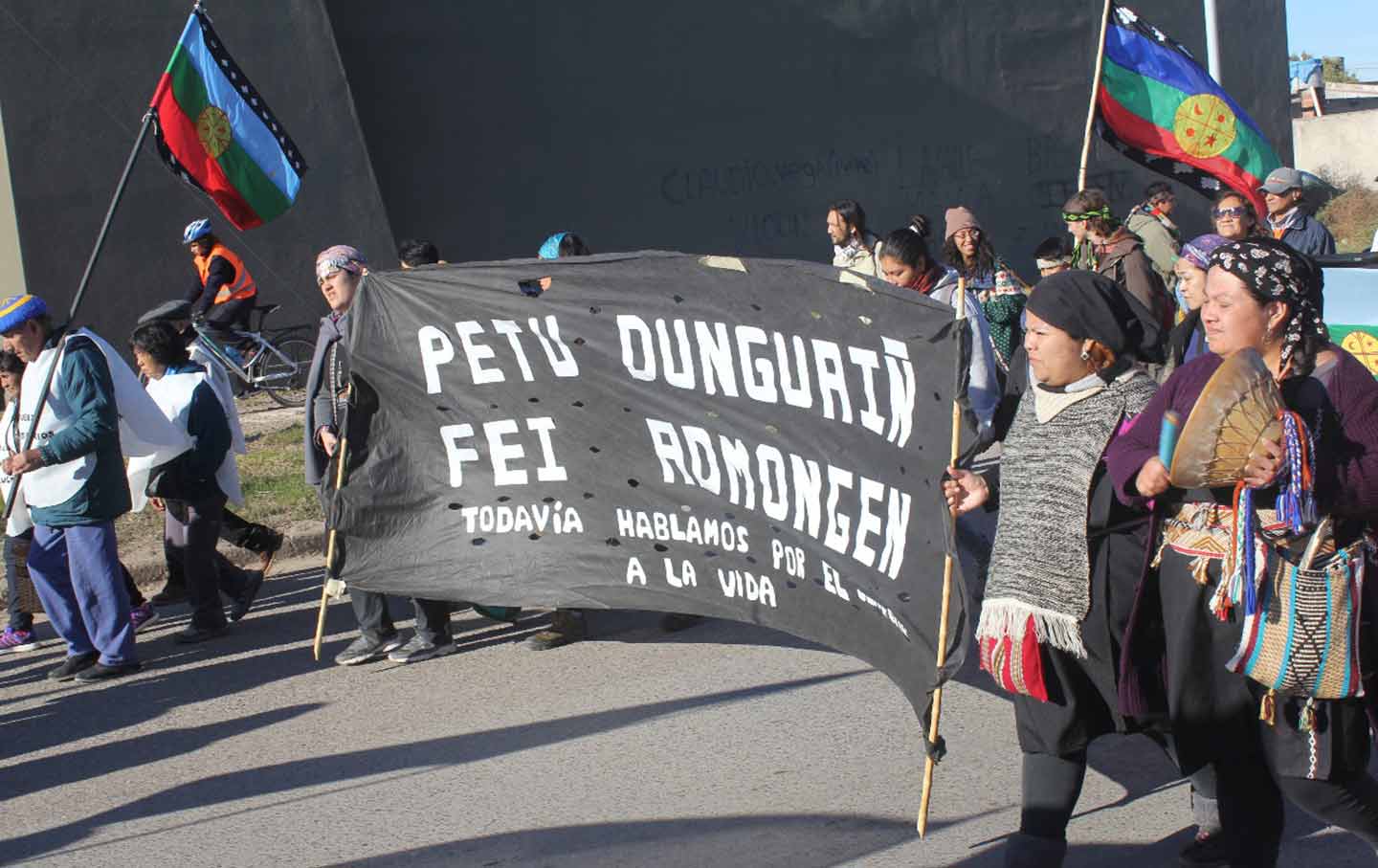 Mapuche activists walk towards Viedma, Argentina during their march for land rights. Their banner, written in both Mapudungun and Spanish, reads “We still speak for the respect for life.” (Courtesy of Aukan Pilquiman)

April 24, 2017, wasn’t a typical day in Viedma, Argentina. For starters, police were stationed outside the provincial government’s office, and the building’s door was blocked off with police tape. The biggest clue, however, may have been the crowd of some 500 indigenous people arriving at the building at the end of a four-day journey from over 500 miles away. Their message, emblazoned on a banner at the head of the caravan, was simple: “We are alive; that’s why we march.”

“We are alive; that’s why we march.” —Mapuche slogan

Jesica Millalonco of Nawel Wapy Ngeiñ, the Mapuche’s communication team, told The Nation that the march began after a series of meetings among the Mapuche in different parts of Río Negro over the past six months. After much discussion, they decided to march to Viedma to protest the law, “which the provincial government is pushing.” Millalonco explained that under the Fiscal Land Code, the government can take control of up to 5 million acres—or 90 percent—of their lands, without any regard for the environment or the Mapuche’s rights.

“The Fiscal Land Code modifies the use of our lands [and] opens the door for further destruction,” Millalonco said.

For the Mapuche, the land in question isn’t just territory. The area endangered by the Fiscal Land Code is inextricably linked to their culture, customs, and way of life—the word “Mapuche” itself means “people of the land.” The Mapuche live mostly within the borders of Chile and Argentina and speak Mapudungun, although it is not recognized as a national language by either country. For centuries, they have been the target of discrimination, their lands seized by the Chilean and Argentine governments, which sought to profit from their natural resources.

And the threats to their existence are far from over—the Fiscal Land Code is just one of several serious dangers facing the Mapuche today. Real-estate speculators, mining conglomerates, and petroleum companies are all hungry for indigenous land. Vaca Muerta, the enormous rock formation that, according to the US Energy Information Administration, contains “the world’s second-largest shale gas reserves,” sits in large part on Mapuche land. If corporations like ExxonMobil and Chevron begin fracking there, the Mapuche may soon encounter new troubles like poisoned water and chronic illness, just as rural communities in the United States have experienced in connection with fracking near their homes.

In the April 2017 march, two separate Mapuche groups traveled to the capital, covering 500 miles in four days through a mix of walking and driving in cars and vans. The first group left Bariloche, about 500 miles west of Viedma, on April 20 and traveled through cities like Jacobacci and Valcheta. The second group left Catriel a day later and headed south until it linked up with the first group. Together, they arrived in Viedma on April 24.

The caravan of demonstrators was welcomed in virtually every town it passed through. At night, they were given food and shelter, and sometimes performed traditional Mapuche ceremonies with their hosts. Hugo Aranea, a Mapuche resident in Río Negro who participated in the journey, called it a “profound and emotional moment.”

“The people at the march reunited with the elderly of our communities and the memory of previous fights for the rights of the Mapuche people,”Aranea said. He was referring to the mobilizations that happened in Viedma ahead of Río Negro’s Integral Indigenous Law, enacted in 1988, which encourages participation from indigenous groups affected by any potential laws.

On the final day, the marchers walked into Viedma, the fourth-largest city in the province and home to over 50,000 people. Upon their arrival, they marched for two hours to the state government’s headquarters. Some Mapuche representatives presented a document with their demands to representatives of Governor Weretilneck, who Millalonco notes was “not in Viedma.” Vice Governor Pedro Pesatti, who was there, refused to meet with the Mapuche or even to read their document.

Although Pesatti wouldn’t meet with the marchers, Luis Di Giácomo, a minister in Río Negro’s provincial government, did receive representatives after the march, saying that he was open to compromise and promising dialogue between the government and the local community. However, he insisted that the Fiscal Land Code provides solutions to “old problems” and that doing away with it altogether is not an option. (A Mapuche representative who met with him later said that Di Giácomo showed that he “knew absolutely nothing.”)

Di Giácomo didn’t elaborate on what he meant by “old problems,” but he was likely referring to the lack of revenue that the provincial government earns from the land. Critics of the code say that it would solve that particular problem by opening the door to exploitation by mining conglomerates. Diego Lawrie, who as Río Negro’s land director manages the province’s territory, denied the charge.

“To say that we have opened the door to mining conglomerates is not so…. There is a National Mining Code and a Provincial Mining Law that regulate mining activity,” Lawrie said.

But the Río Negro government has been playing with opening that door for quite some time. More than two decades ago, the province’s then–under-secretary of natural resources told BNamericas that Río Negro had a “huge potential for mining” and that most of it was “unexplored.” The Fiscal Land Code would essentially give a blank check to companies like Blue Sky Uranium, a Canadian company that owns assets in Río Negro. The minerals buried there, specifically in Bajo Santa Rosa, are useful for the production of nuclear energy. Under the code, the company could purchase the right to explore Mapuche land from Río Negro’s government, ignoring any local concerns.

“With land we are everything, but without it we are nothing.” —Jesica Millalonco

Millalonco, the Mapuche spokesperson, said the code allows extractors and speculators to “basically change the right to own land”—the government can auction Mapuche land away—“and occupy the territory.”

But the Mapuche are fighting back, and their 500-mile march is just the beginning. Like the water protectors in Standing Rock, South Dakota, the Mapuche understand that land seizures threaten not only the current inhabitants, but future generations as well. They intend to continue educating other Mapuche people about the law’s consequences, and to continue applying pressure to the Río Negro government.

“We understand that with land we are everything, but without it we are nothing,” Millalonco said. “For the Mapuche, the territory is more than land. It is our place where life, spirit, and vision of the world develops.”