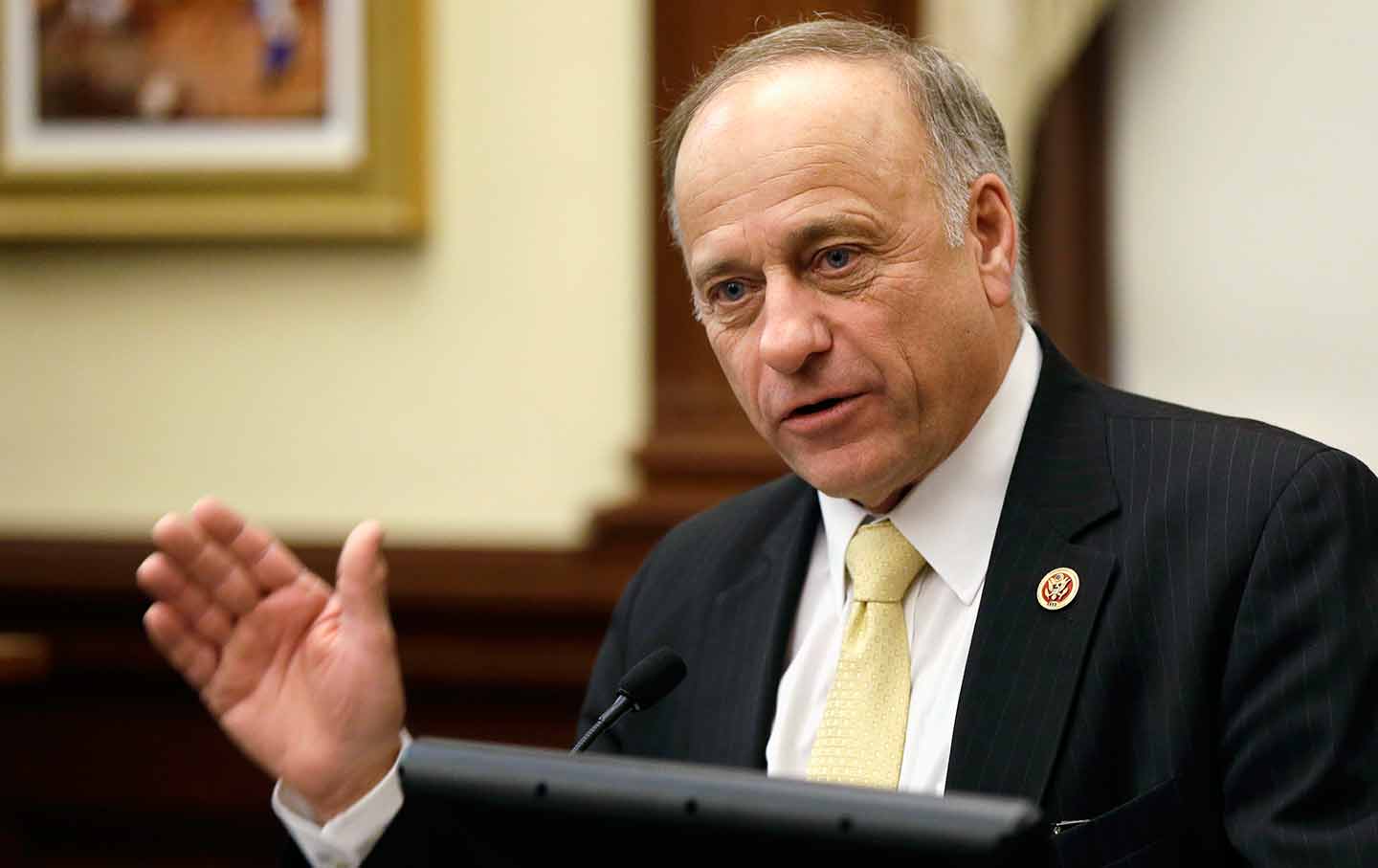 Donald Trump has made no secret over the years of his regard for Iowa Congressman Steve King, and of his determination to embrace most if not all of the incendiary Republican representative’s crude “know-nothing” politics of Muslim bashing and immigrant blaming. In the fall of 2014, when he was still just considering a presidential run, Trump traveled to Iowa to headline a private fundraising event for King.

Hailing the congressman as a “special guy, a smart person, with really the right views on almost everything,” Trump said then that if he did not seek the Republican presidential nomination in 2016, “I want to see someone who is going to make our country great again, which is basically the same thing as Steve.”

The Des Moines Register reported that Trump said his ideology was so in sync with King’s that “We don’t have to compare notes.”

Now Trump is a crude “know-nothing” president who engages in Muslim bashing and immigrant blaming. And King is tweeting about his enthusiasm for Geert Wilders, the Dutch extremist who is the darling of white nationalists in Europe and the United States.

Ahead of this week’s election in the Netherlands, where the fiercely anti-immigrant Wilders is waging an aggressive campaign as something of a “Dutch Trump,” King tweeted:

Wilders understands that culture and demographics are our destiny. We can’t restore our civilization with somebody else’s babies.

Wilders understands that culture and demographics are our destiny. We can’t restore our civilization with somebody else’s babies.

King’s tweet was too much even for the chairman of the Iowa Republican Party, Jeff Kaufmann, who said: “First of all, I do not agree with Congressman King’s statement. We are a nation of immigrants, and diversity is the strength of any nation and any community.”

Republicans in Washington need to join Democrats and King’s own state party chair in formally condemning the congressman.

Trump, as the president and the leading figure in the Republican Party as it has now reconfigured itself, has a distinct moral and political duty to make the break with the Iowan with whom he aligned himself back in 2014. But Trump also has a tendency to resist pressure to abandon wrongheaded associates and appointees.

No matter how the president reacts to King’s latest outburst, however, congressional Republicans can and should send a clear signal that they reject their colleague’s crude bigotry.

Censure is an accepted disciplinary procedure of the chamber. As the Congressional Research Service explains:

The House may generally discipline its Members for violations of statutory law, including crimes; for violations of internal congressional rules; or for any conduct which the House of Representatives finds has reflected discredit upon the institution. Thus, each House of Congress has disciplined its own Members for conduct which has not necessarily violated any specific rule or law, but which was found to breach its privileges, demonstrate contempt for the institution, or which was found to discredit the House or Senate.

The New York Times has noted that “Censure is the most serious punishment the House of Representatives can mete out, short of expulsion. When members are censured, they must stand in the well of the House while the speaker reads a resolution rebuking them for misconduct.”

King has surely discredited himself, and as a sitting congressman he has discredited—and diminished—the US House of Representatives. He merits, at the very least, the response from his colleagues that Democratic and Republican US senators directed toward Wisconsin Senator Joe McCarthy when they finally held the disreputable hatemonger to account in 1954.

The bipartisan 67-22 Senate vote to censure McCarthy for abusing his position did not remove him from the Senate but it marked the right-wing Republican as a man who had shamed himself and the chamber. And that vote did much to break the spell of McCarthyism that had so damaged the country since the senator began making unsubstantiated charges against diplomats and soldiers and others as part of his “Red Scare” rampage.

McCarthy was a Republican, serving in a Republican-led chamber. But congressional Republicans of sixty years ago had the courage to place conscience above partisanship. The question is whether Paul Ryan’s Republicans can muster the same combination of courage and conscience that their historic predecessors.