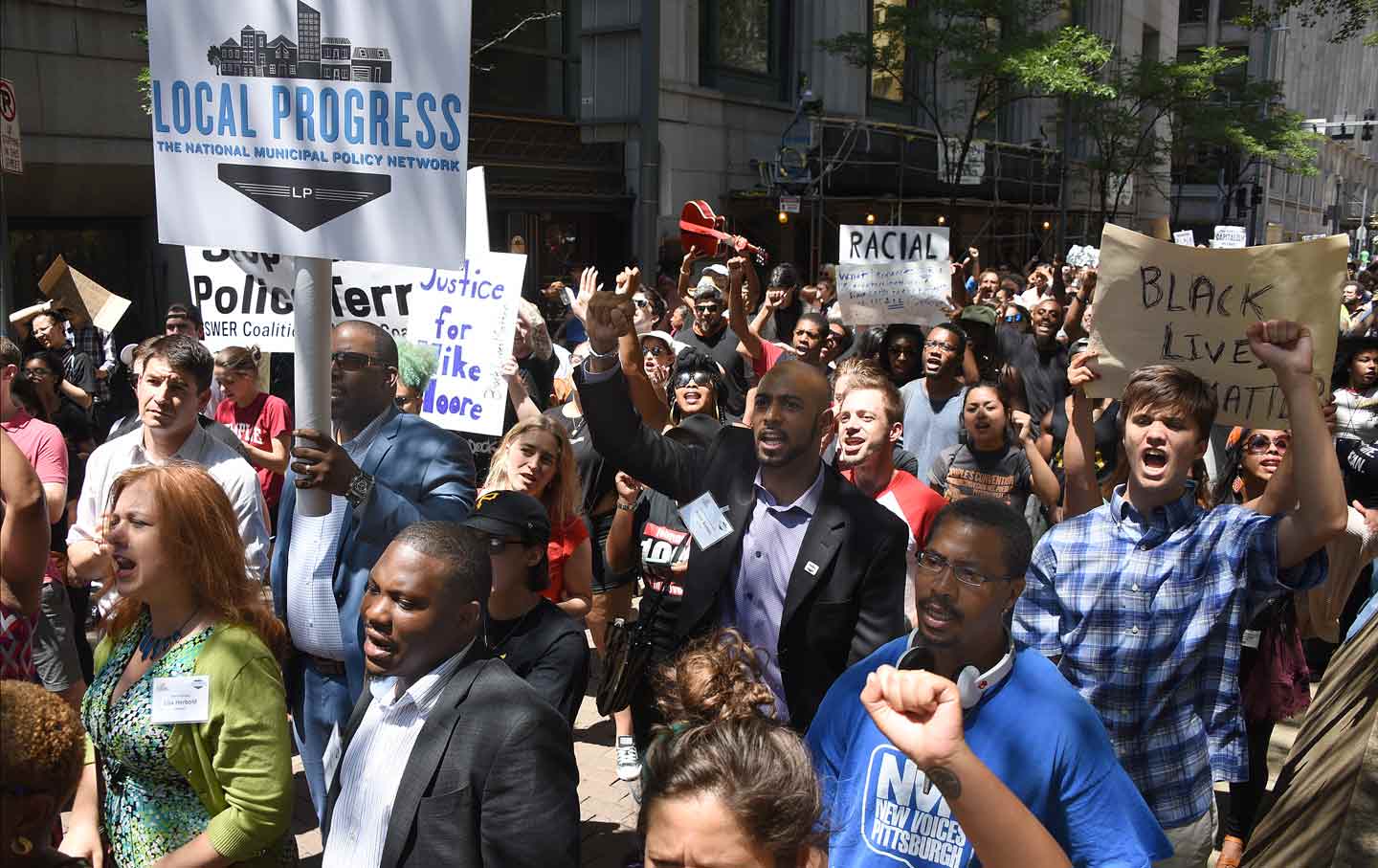 As the Democratic National Convention ramps up in Philadelphia, some themes have emerged: party unity, national security, and a stronger, more equitable economy. The platform presented by the Democrats is undoubtedly more progressive than it’s been in years past, but absent from the speeches are many issues that affect cities like the one where thousands of delegates are currently gathered: nuts and bolts urban policies like housing affordability, transportation funding, and access to good public schools. Those issues are addressed in the official platform of the Democratic National Committee, but at a time when inequality is at an all-time high in many urban areas, when gentrification and housing prices are pushing poor people out of cities, and environmental injustices are sickening city residents (see: Flint), neither party seems particularly interested in addressing the most pressing needs of US cities.

This is somewhat expected for the Republican party, which, notwithstanding nods to the Latino community a few years ago, has continued to entrench itself as the anti-urban party of whiteness. But despite the fact that more than 80 percent of Americans live in urban areas, and despite the reality that cities are Democrats’ biggest strongholds (Phoenix, Oklahoma City, Fort Worth, and Salt Lake City were the only major cities to vote Republican last presidential election), urbanism has taken a backseat to wooing swing-state moderates. Hillary Clinton’s vice-presidential pick was a testament to that.

Enter Local Progress, a nonprofit that links together hundreds of progressive local elected leaders in cities across the country in an effort to push for local policy change, from minimum-wage increases and anti–wage theft enforcement, to housing-discrimination laws and renewable-energy strategies. On Tuesday, the organization’s members met at the Ethical Society, just a few blocks from the DNC, to release their first national policy platform. The platform, its leaders say, is an effort to highlight the reality that, to a notable degree, the nation’s progress hinges on local urban change—and this change is nearly impossible without increased federal help.

“If you talk to local electeds in red or blue states, in cities large or small, you’ll hear about the need for things like more Section 8 housing, and yet you rarely hear those issues mentioned at a national level,” Brad Lander, a New York City Council member and one of the founders of Local Progress, said in a phone call before the gathering. “These issues take up so much space in people’s lives, and in local politics, and it’s kind of ridiculous they’re not more featured at the national level. That’s what we’re trying to do.”

The platform opens with soaring language: “This election year, as we witness hatred and xenophobia being marshaled in support of a reactionary national agenda, we stand together in support of a different vision for making America great: economic inclusion, racial equity, sustainable communities, and justice for all. We believe that the Federal Government can and must play a central role in supporting localities’ efforts to create a more just and equitable society. This is our vision for that collaboration.”

But while the vision is expansive, the plan itself isn’t made up of sweeping rhetoric, but instead goes for realistic policy changes and tweaks that have already been proven to work on a local level. It’s the difference between constantly swinging for the fences (and often failing), and playing small ball: making incremental progress that translates into real wins for tens of millions of Americans, and in the process proving that progressive policy is not a boogeyman. Not unlike the “Sewer Socialism” of old, many of the issues embraced by Local Progress have been deemed not sexy enough for prime-time stump speeches, but they’re issues that nonetheless directly impact most Americans’ lives.

The Local Progress platform is organized around four themes: shared prosperity, sustainable and livable communities, equal justice, and good government. Its economic proposals include things like increasing federal grants to cities so they can experiment with jobs programs for low-income workers and implementing stricter labor laws and higher minimum wages. Education is also included under the “shared prosperity” theme: Local Progress recommends Congress provide additional federal funding to states so they can fully make up the difference between the money spent on educating students in poorer and richer districts, train teachers to deal with racial and economic disparities in the classrooms, and adequately evaluate the impact of charter schools on segregation. The platform also posits that without increased funding for affordable housing, Section 8 vouchers, and incentives for cities to implement anti-displacement measures like rent control, low-income people won’t be able to hold down the kind of jobs needed to make it to the middle class. (Rents have skyrocketed since the Great Recession, as fewer people can put up the down payment required to buy a home, and as corporate consolidation has decreased competition in the rental market.)

On the environment front, the platform points out that environmentalism, racial justice, and equitable cities are all linked, and uses the recent water crisis in Flint as an example of why more funding for infrastructure is needed. According to the platform’s backers, small changes in federal policy, like requiring regular testing of water supplies, would go a long way toward helping urban centers remain healthy. The platform also recommends redirecting highway dollars away from states and to cities so that planners can focus on creating public transit-centric cities, instead of sprawling megalopolises.

Social justice is a significant part of the platform as well. Policing and criminal-justice reform have become big issues in the presidential election this year, and Hillary Clinton has detailed the problems of mass incarceration and racial bias in her own platform. There’s a lot of overlap between what she and Local Progress suggest: sentencing reform, strengthening investigations of officer-involved shootings. But Local Progress goes further, suggesting local police be required to keep data on their methods of policing (stop-and-frisk, use of force, arrest data), and be barred from receiving military-style equipment in most cases. The Local Progress platform also goes far beyond Clinton’s platform in recommending reforms to the country’s immigration system, pointing out that people being deported don’t have the same rights as others to counsel, and are often housed in private prisons that have a vested interest in keeping imprisonment numbers high.

Helen Gym, a councilwoman from Philadelphia and a member of Local Progress, said that inequality is the biggest issue her city faces—Pennsylvania has often been cited as the poorest big city in America. While Congress has been spinning its legislative wheels, local leaders have begun addressing the problem head-on by pushing for things like a higher minimum wage, a mandatory sick-leave policy, and investments in the city’s education system. The question on Gym’s mind is whether national Democrats will follow local leaders in their march toward progressive policy.

“Our platform evolved out of the community struggles that we’re trying to deal with at a grassroots level,” she said. “We have to keep pushing the [Democratic] party harder to follow suit. We’ve seen a lot of progress, but there’s a really long way to go.”