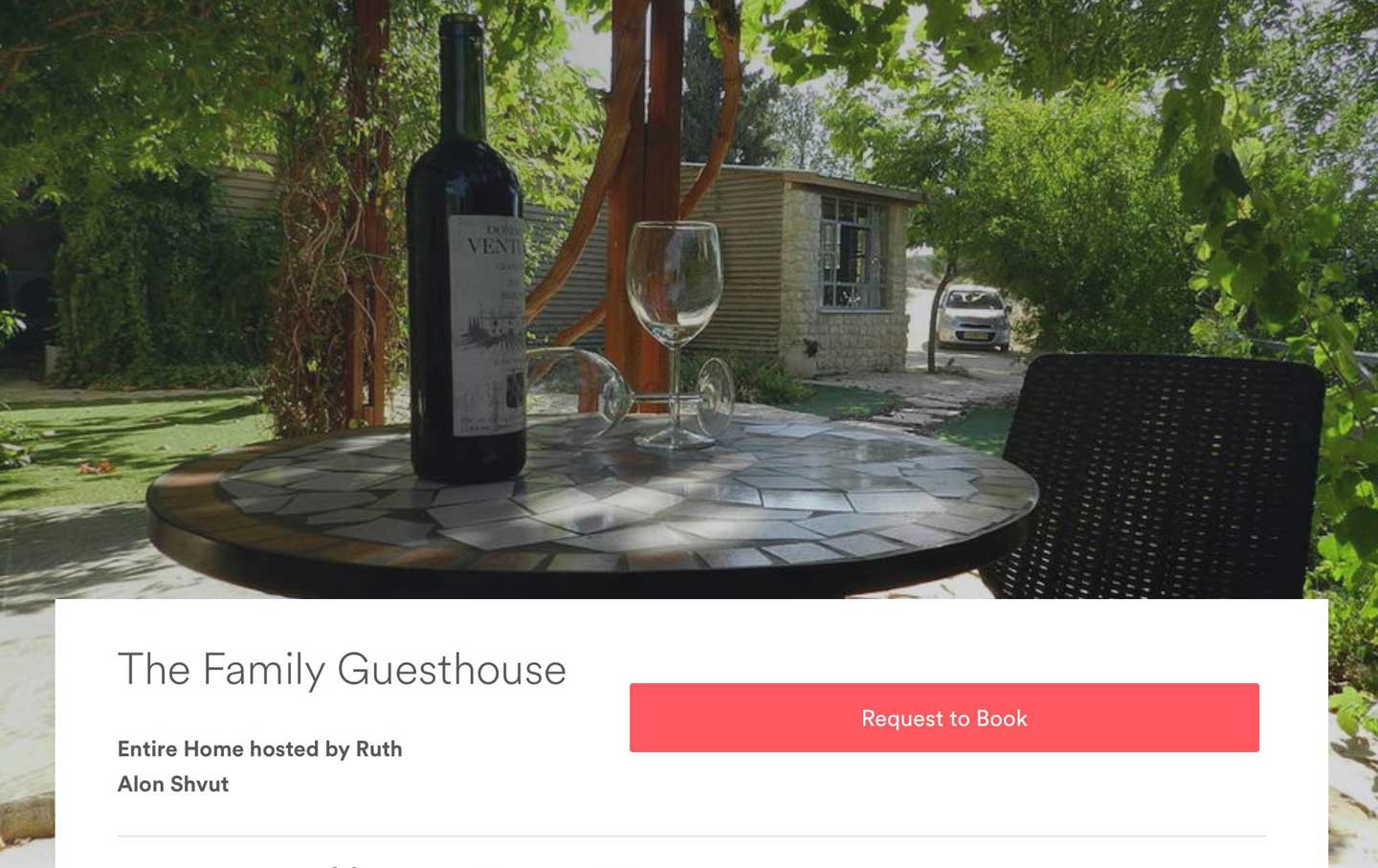 In the Israeli settlement of Alon Shvut, a guesthouse is listed on Airbnb. (Airbnb)

For many people, summer is a time for travel and visiting new places. In anticipation of this, Airbnb recently launched a new marketing campaign urging travelers to use the online accommodation service to rent people’s homes instead of staying at hotels so that they don’t just “go there,” they actually “live there.”

This idea becomes particularly fraught when we’re talking about where I live: the occupied West Bank. My hometown, Hebron, has been under Israeli military occupation since 1967, more than a decade before I was born. I have never known freedom or equality in my homeland, and, over the years, things have gotten worse. Today, Israeli settlements are scattered all over occupied Palestinian land in the West Bank, including in and around Hebron. Settlements, which are illegal under international law, are widely considered one of the biggest roadblocks to a lasting peace.

So it may come as a surprise to readers to learn that some of these settlements are among the places where Airbnb lists rental properties—and encourages travelers to not just “go” but to “live.”

“It may come as a surprise to readers to learn that Airbnb lists rental properties in Israeli settlements.”

A quick trip through the Airbnb website reveals rentals in the settlements of Ma’ale Adumim, Ariel, Efrat, Ma’ale Rehavam, Tekoa, and Havat Gilad. “3 rooms + balcony, a grape arbor, an orchard and a sitting area overlooking the spectacular Judea desert landscape. Well equipped, decorated, beautifully & tastefully furnished in authentic oriental style,” boasts a host named Itzhak of a Tekoa listing that goes for $166 a night. Another host, Howard, promises a “wonderius [sic] location on the edge of the desert” and “Camel tours to the Dead Sea” at his $515 per night Tekoa lodging. In El’azar, a settlement founded in the 1970s by a group of New York expats, Eilon offers guests a “spacious, stunning home” in a “safe gated Community.”

All these listings fall outside the Green Line (used to delineate the internationally recognized border between Israel and the West Bank), but they are listed as being in “Israel.” In fact, Airbnb’s maps do not draw attention to the Green Line, making it difficult for the unfamiliar user to distinguish. Guests may not even realize they are actually staying in a settlement until they see the checkpoints and segregated roads.

This practice helps Israel normalize its control of Palestinian land and the apartheid system it has in place. Earlier this year, +972 magazine created an online persona: an American citizen of Palestinian descent who wanted to stay in a settlement rental. “Haled” attempted to make reservations at dozens of listings, but was declined at all but one, and rarely given a reason. In one case, the host responded: “I’m very sorry but I don’t think that it’s possible…. it’s very sensitive here.… [I] hope that in [a] different life we could be good friends.” In another example, the response was: “I am sorry but we will not be able to confirm your reservation. Due to the political situation it is not possible at this time.”

Recently, Airbnb came under scrutiny for complaints of racial bias on its platform, and CEO Brian Chesky tweeted that “Racism and discrimination have no place on Airbnb.” Despite this, and even though Airbnb’s anti-discrimination policy states that the company prohibits listings that promote racism, discrimination, or harm to individuals or groups, “Haled” faced blatant discrimination. Moreover, Israeli settlements are discriminatory by their very nature: Palestinians who are indigenous to the land not allowed to live in them. And those that live under Israeli rule, whether under a brutal military occupation in the West Bank, Gaza, and East Jerusalem, or as second-class citizens within Israel, face apartheid policies.

I am no exception. When I was a young child my father would hold my hand as he would take me through the busy marketplace of Shuhada Street. That was before Baruch Goldstein, an Israeli Jewish settler from Brooklyn, opened fire in the Ibrahimi mosque in 1994, killing 29 people in prayer. Since then Shuhada Street has been almost entirely closed to Palestinians, and the doors to Palestinian homes sealed shut under order of the Israeli military. These restrictions have forced thousands of Palestinians to leave their homes, and more than 1,800 businesses have been forced to close.

Just the other day, I was told by soldiers that the street near the Ibrahimi mosque is for Jews only. So as a Muslim I may not use it to go to my place of worship. I have been arrested more times than I can count for nonviolent human-rights work. Meanwhile, Israeli settlers, who regularly attack Palestinians, move about freely under army protection and with complete impunity. Just this past November, settlers took over my backyard for three days, as Israeli soldiers did nothing but watch. When I am arrested, I am subject to Israeli military law. The rare times settlers are arrested, they are subject to Israeli civil law. As US Ambassador to Israel Dan Shapiro himself commented earlier this year, Israel has “two standards of adherence to the rule of law: one for Israelis and another for Palestinians.”

This is what Airbnb is contributing to by listing homes in Israeli settlements. Airbnb has so far ignored the demands of the Stolen Homes campaign, which was launched by a group of human-rights organizations supporting the Palestinian struggle for freedom, justice, and equality. The campaign is urging the company to comply with a Human Rights Watch report that called on companies to end all business with Israeli settlements in order to comply with their responsibilities. They delivered a petition signed by more than 140,000 people to the company’s headquarters in San Francisco in March. Instead of engaging with the concerns of these activists, however, security guards for Airbnb blocked the doors of their building and have not responded to requests for a meeting. The only public response from the company has been a statement, given to the San Francisco Chronicle, in which Airbnb described the issue as “complex.”

But international law is clear. Human-rights organizations have made it clear. And to Palestinians who recently marked 68 years since the Nakba, the deliberate and systematic mass expulsion of Palestinians from our land to establish the state of Israel in 1948, it is not at all complex: Millions of us are unable to live in our homeland freely; until we are, companies shouldn’t profit from others going there.