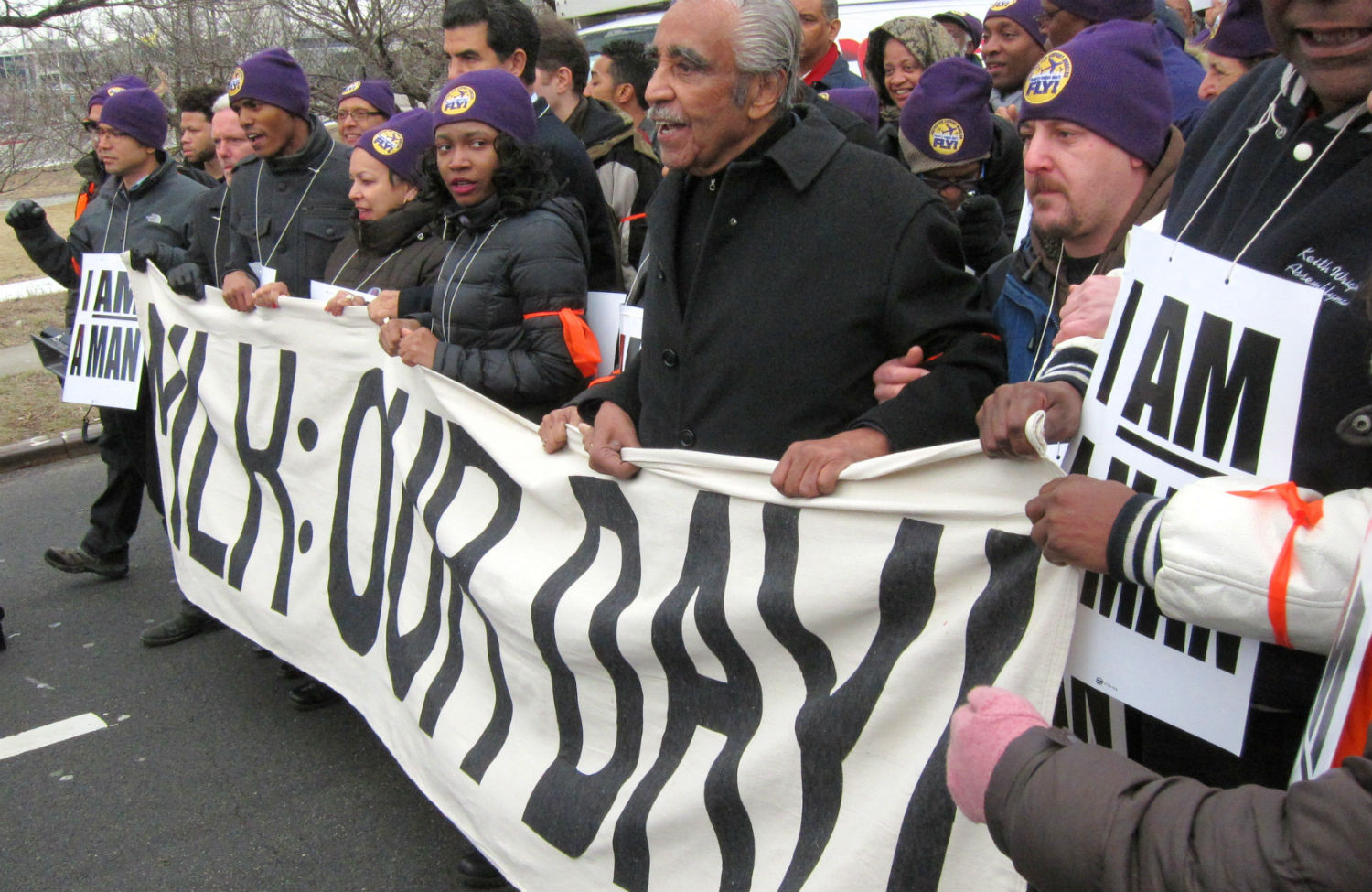 Around thirty-two people were arrested Monday on Martin Luther King Jr. Day, including Representative Charles Rangel and nine New York City Council members, when they blocked a bridge to LaGuardia Airport during a rally for liveable wages and an MLK Day paid holiday. In total, close to a 1,000 people attended the protest that was organized by Local 32BJ of the Service Employees International Union.

Before the march to the bridge, Representative Rangel told the crowd: “No one should be one pay check from homelessness. We have a new mayor now, Bill de Blasio, and I am certain that he will be spearheading our fight for better wages.”

The workers are not employed by the airlines or the Port Authority but rather by companies that contract out for things like food service, custodial work and security.

“Some employees have to go to food pantries to support their families. Thousands live in poverty,” said Hector Figueroa, president of Local 32BJ-SEIU.

“The City Council stands united to support you, airport workers, in your demands for dignified work and respect,” Council Speaker Melissa Mark-Viverito told the crowd. “We have seen a mobilization across this nation of fast-food workers, car wash workers, now airport workers. We will ensure that we stand with you.”

Many of the workers say low wages force them to rely on government assistance to feed their families.

“I find it nonsense that I have a full-time job and I have to seek public assistance,” said Andrew Lloyd, a cabin cleaner at JFK Airport. “I have to do overtime just to support myself and my family.” Mr. Lloyd said he and his coworkers work full weeks and extra shifts but receive no paid sick days or vacation time.

Prince Jackson, 56, of Jamaica, Queens, said he works as a security guard at Kennedy Airport, making $8 an hour, but has not received a raise in four years and is not entitled to paid sick time.

“Martin Luther King Jr. was a friend to the workers in his day, and the workers of today would like to be able to commemorate his memory by fighting for our rights as employees,” Jackson said to Newsday.

“The new day has come in the city of New York,” Public Advocate Tish James said at the protest. “And this new day is consistent with the dream of Dr. Martin Luther King to lift all people out of poverty.”

In an email statement, Port Authority officials said the agency “supports making Martin Luther King Day a paid holiday for airport workers” and planned to “continue to have discussions with the union, airlines, and other airport stakeholders regarding this issue.”

Earlier in the month, dozens of airport workers from Kennedy, LaGuardia and Newark airports, and their supporters, gathered outside Port Authority headquarters to demand better wages and improved working conditions.

“I make $8.50 an hour and I’m a 47-year-old man with three kids,” said Kennedy Airport guard Michael Carey, who lives in East New York, Brooklyn. “Do the math. I can’t support my family on that salary.”