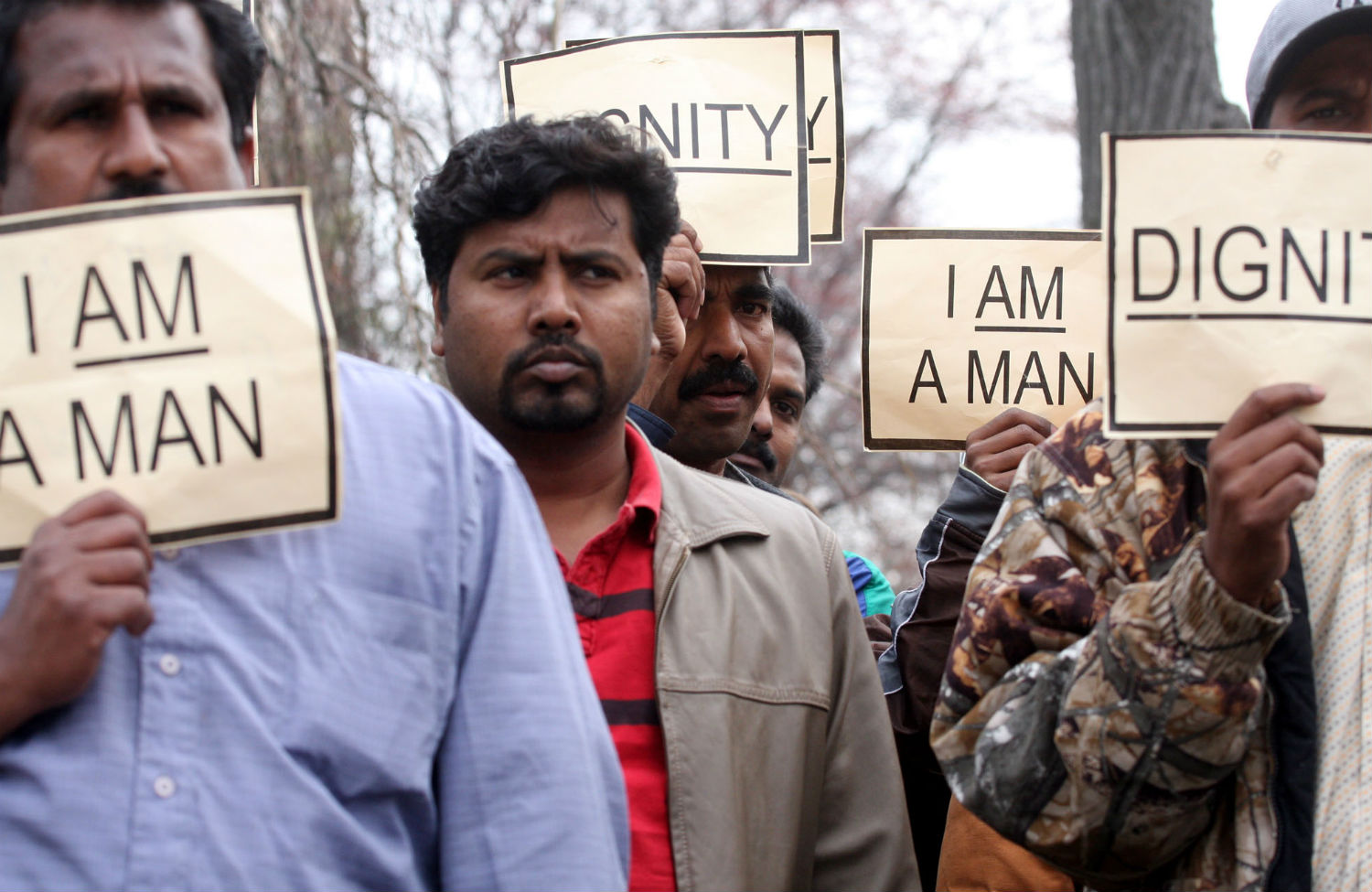 Indian workers, who labored in abusive conditions in the aftermath of Hurricane Katrina, protest outside the Embassy of India in Washington (AP Photo/Lauren Victoria Burke)

When the Gulf Coast was struggling to recover from Hurricane Katrina back in 2006, as reconstruction workers streamed in and out of chaotic worksites, a group of roughly 500 immigrant workers barely caused a stir when they arrived to do some routine pipe work for oil rigs. The men were “guestworkers” recruited from India to work for the maritime contractor Signal. The company seemed to have operated “on the books,” fixing them up with special H-2B visas, and the men disappeared into a vast army of imported low-wage labor. They began to re-emerge in 2007 as survivors of a nightmarish captivity, telling stories of prison-like encampments, fraud, intimidation and forced labor. Five of those men were vindicated this week with a $14 million guilty verdict against Signal on various federal counts of labor abuse and trafficking.

The incident was an extreme example of abuses that pervade a subterranean global labor market of guestworkers, who do temporary jobs for American industries without the protection of essential American labor laws. For this opportunity to earn higher wages than they would in their home countries, workers claimed they paid “recruitment fees” of about $11,000 to $25,000 to labor brokers, only to see both their savings and potential earnings evaporate in their bondage. Earlier promises of gaining green-card sponsorship through their jobs also quickly fell apart.

After the workers escaped and began protesting, in 2008, Paul Konar, a middle-aged worker from Kerala, India, told The New York Times, “Everyone has a dream. If we could come here legally to live with our families, that was my dream.”

According to the workers’ complaints, in the isolated “man camps” at shipyards in Texas and Mississippi, they were segregated from other workers and charged about $1,000 a month for food, shelter and tools, which effectively kept them tied to their worksite. In the crowded “bunkhouses,” described as “unfit for human habitation,” workers recalled, “privacy was nonexistent. Toilet and bathing facilities were insufficient. Food was often rotten.”

They were kept under tight surveillance, further humiliated with racial discrimination and verbal abuse, and intimidated for trying to challenge their bosses. Signal argued in a statement that the men had chosen to work and could volunteer to be deported at any time: “The only consequence of quitting their job was returning to their home country, but that restriction was dictated by U.S. immigration law, not Signal.”

And that’s precisely the problem. When some workers attempted to meet with lawyers to take legal action, they were bullied and threatened with deportation—simply for exercising their rights.

Since the workers were not able to bring their cases as a class action, other lawsuits are pending, and it’s unclear how this might affect other abuse victims who have not complained publicly. But public scrutiny of the migratory labor racket has intensified over the past several years, with many big-name employers facing lawsuits and protest campaigns: overseas students lured into grueling fast food jobs, to migrant seafood processing workers trapped in Walmart’s supply chain. All these workers were exploited through a visa system that facilitates both their mass recruitment and mass exploitation under contracts that bind them to employers (bosses are known to confiscate passports to keep them from leaving).

Meanwhile employers, who are just one link in a convoluted chain of contractors, subcontractors, recruitment agencies and bureaucrats, can easily evade accountability as they profit from the wage theft and oppressive conditions roiling throughout these industries.

The Signal workers’ case was rare in that some have managed to bring civil suits against their employer. But their efforts helped spearhead a broad, diverse movement of grassroots worker centers and advocacy organizations like the National Guestworker Alliance (NGA), which was founded in the wake of Katrina. Linking the Signal activists with guestworkers from around the world, these groups have staged rallies, hunger strikes, testifed before Congress, and sparked a groundswell of public support, often intersecting with other labor and immigrant rights campaigns.

The workers-turned-activists demand an overhaul of Labor Department and State Department visa-based labor policies, as well as changes to immigrant enforcement rules to stop employers from using detention and deportation by the ICE agency as a cudgel for terrorizing workers into silence.

The Signal case has so far spurred action by the Equal Employment Opportunity Commission, which sued the company for human trafficking violations against hundreds of Signal workers, along with a major regulatory overhaul of the employment visa system.

But like many aspects of immigration policy, reforms have been stalled by political and legal gridlock. The H-2B reforms have been held up in litigation, with employers charging that it unfairly restricts the recruitment of migrants to fill manpower “shortages.” Efforts to incorporate similar protections into immigration reform legislation failed last year. And conservatives in Congress have moved to suspend funding in order to obstruct the Labor Department’s enforcement of the revised H-2B regulations.

The suspended rules would have eliminated recruitment fees for employers and labor recruiters, and “prohibit employers and recruiters from retaliating against workers who file a complaint, exercise their rights, or help other workers to do so,” and restrict the use of guestworkers to fill temporary job slots—a tactic that can undercut wages and economic security for the entire workforce.

Citing the Signal case as an extreme example of a preventable labor crisis, NGA Legal Director Jennifer J. Rosenbaum tells The Nation, “Clearly the issues raised in the case show how violations related to recruitment fees, retaliation, a number of things that would be regulated better under those rules—when they’re not regulated, lead to forced labor.”

For now, equal rights remains a dream for the Indian laborers and their fellow guestworkers, but they’ve come a long way since surviving their nightmare in the hurricane’s aftermath. From Kerala to the bowels of post-Katrina disaster capitalism to Capitol Hill and federal courts, they raised hell to make their bosses pay. Yet the most basic labor rights remain out of reach for guestworkers. It’s ironic and yet it underscores the precise reason why employers work so hard to silence these workers. If they can have this much impact when the system is rigged against them, imagine where their dreams could take them if the law actually protected their rights instead of denying them.