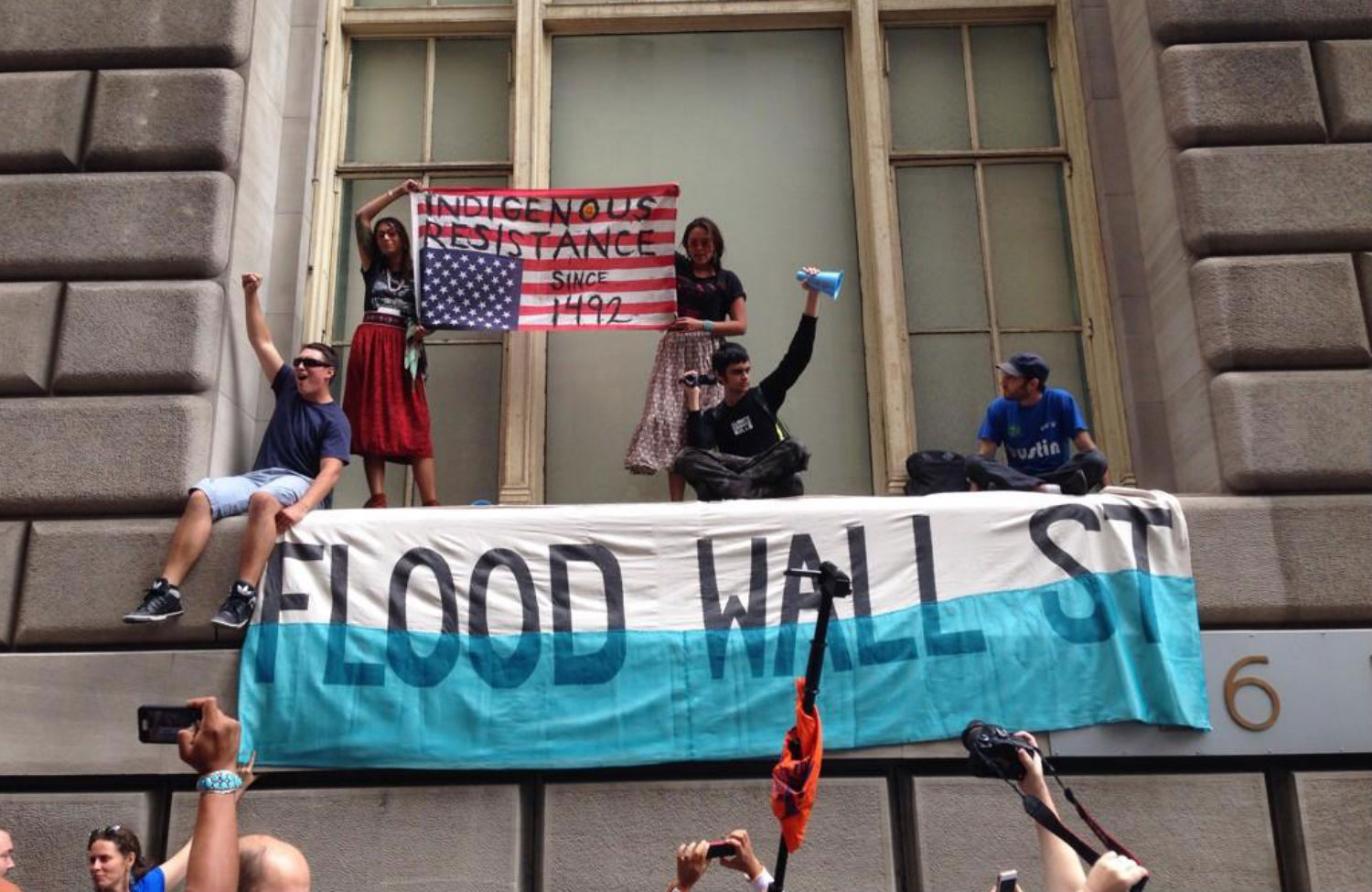 On Tuesday, two days after some 400,000 of us took to the streets of midtown Manhattan, calling on world leaders for serious and urgent climate action, I found myself sitting in a conference room at the UN Church Center on First Avenue, its floor-to-ceiling windows offering a beautiful view of the United Nations building across the street, flags flying crisply in the sun. I was there for the final day of the People’s Climate Justice Summit, convened by the Climate Justice Alliance, a collaborative network of more than thirty-five grassroots and supporting organizations that unites communities on the front lines of climate disaster and fossil-fuel extraction and pollution across the United States. (Nation readers may recall reading about the CJA in my cover story “From Occupy to Climate Justice” last February.)

As I admired the view across First Avenue, I was well aware that few in the city, including in the elite precincts of our national security–obsessed national media, could be bothered to notice what was happening in the room where I sat.

I listened as voice after voice representing these hard-hit communities—Indigenous, African-American, Latino, Asian Pacific Islander, poor and working-class white communities, as well as representatives from the front lines in South America, Africa and South Asia—got up and spoke, some with tears. They were talking not about some distant threat of climate catastrophe but the catastrophes that are already upon them. I listened to Damaris Reyes of the group Good Old Lower East Side (GOLES), who told of the horror her family and community endured during and after Hurricane Sandy (“our community saved our community,” she said, not any government response), and to retired Harlan County coal miner Stanley Sturgill of Kentuckians for the Commonwealth, who spent decades digging up the stuff that not only poisoned his body—with black lung disease—and his beloved Appalachia, but also helped supercharge the Sandy surge.

At around 3 pm on Tuesday, a delegation of the Climate Justice Alliance streamed onto the sidewalk and proceeded to make a symbolic attempt to deliver their demands to the leaders gathered at the UN (symbolic because they had no official access to the UN meeting). Not surprisingly, they were stopped by police and security officers before they could cross the street. And so they stood with their banner at the corner of 45th and First, a small crowd of supporters gathered around them, and read their statement—or tried to, as the delegation was harassed constantly by police, who forced them to move along. Their statement read in part:

We demand that world leaders support and move money to our community-led priorities and local infrastructure needs to build sustainable community economies, energy democracy, zero waste, food justice, public transit and affordable housing—pathways that can create millions of long-term jobs and put our communities back to work. We support Indigenous peoples, our brothers and sisters of the North and the Global South, in their climate justice struggles linking land and water rights, land title and the full implementation of the UN Declaration on the Rights of Indigenous Peoples.

Of course, nobody expected a red carpet reception. But it would have been nice to be noticed by at least some of the media who covered—and a lot more of the groups who organized—the People’s Climate March two days before.

This is as close as the People’s Summit is going to get to the UN … this time. @CJAOurPower #PeoplesClimate pic.twitter.com/zuqTCbSa5P

Perhaps anticipating the lack of interest—or, at least, the difficulty of being heard above the usual noise—the Climate Justice Alliance had put out a call to action well ahead of time, encouraging friends, allies and supporters in New York City and beyond to engage in nonviolent direct action in the days before or after the People’s Climate March, drawing attention to the urgency of their demands.

On Monday, in the streets of Manhattan’s financial district, came a resounding answer to that call—when the large and well-organized Flood Wall Street protest, more than a thousand strong, swept out of Battery Park and noisily, defiantly and yet peacefully occupied multiple blocks of Broadway near Wall Street from mid-day into the night. Ultimately, 104 were arrested for their civil disobedience.

As one of Flood Wall Street’s organizers, Farhad Ebrahimi, told me in an e-mail, the “common thread” linking the Flood and the CJA demands “is the shift from a generic call for ‘climate action’”—as seen in Sunday’s march—“to a more intentional call for ‘climate justice.’”

“The Climate Justice Alliance put out a call to take direct action beyond the march, and that call resonated deeply with the organizers of Flood Wall Street,” he explained. “The People’s Climate March contained a section titled ‘We Know Who Is Responsible,’ but it left that statement up to individual interpretation. Both the Climate Justice Alliance and Flood Wall Street, on the other hand, have been very explicit as to who’s responsible—it’s the corporations driving the extractive economy and the Wall Street bankers who finance them.”

Monday’s Flood was planned and announced weeks in advance, and it did make it into the master media narrative around the march. What’s interesting, though, is how its solidarity with frontline communities, and the Climate Justice Alliance in particular, was downplayed or, mainly, overlooked.

Yotam Marom, a veteran Occupy Wall Street organizer who was also one of the core instigators and organizers of Flood Wall Street, says it succinctly: the action’s goals were “to support the public in beginning to make the connection [between] climate change and capitalism, to shine the media’s light on the real culprits on Wall Street, to stand in solidarity with frontline communities, and to disrupt business as usual—and we accomplished them.”

A lot has been made—and rightly so—about the breadth and diversity of the climate movement on display in Sunday’s truly historic march (in which my wife and I marched with our children, ages 10 and 14, along with thousands of others from Massachusetts). And it is vitally important to celebrate the work that’s been done to build that movement—the existence of which, after Sunday, cannot be denied. (A friend of mine, whom you might call an old-school lefty, echoed many when he mistakenly suggested that with Sunday’s march we can now say there’s a “climate movement.” I gently pointed out that we’ve had a climate movement for some time, that a march like that doesn’t just materialize out of thin air, but from years of tireless grassroots organizing, and that in fact the march was simply the biggest demonstration to date of the power we’ve built and our potential as a movement going forward.)

So, yes, let’s celebrate the People’s Climate March and all its diversity, as I wholeheartedly do. But until the people represented by the Climate Justice Alliance are taken as seriously in our national media and national politics, and inside the UN, with seats alongside those of the one percent—and until the indignity of having to deliver legitimate demands for universal human rights on a street corner, harassed by police, is forever remedied—then all our celebrations will be empty words.

The real celebration of that diversity, I want to say, was at Broadway and Wall Street—where those many hundreds marched and sat down in the street to disrupt business as usual and bear witness to the ongoing crimes against humanity committed by an industry, and a political-economic order, doubling down on destruction. Those voices and bodies, animated by love and anger and an iron resolve, refuse to be ignored. They know what it takes. They know it takes struggle. They know that a sea of well-behaved people—even 400,000 of them—ain’t gonna change history by itself.