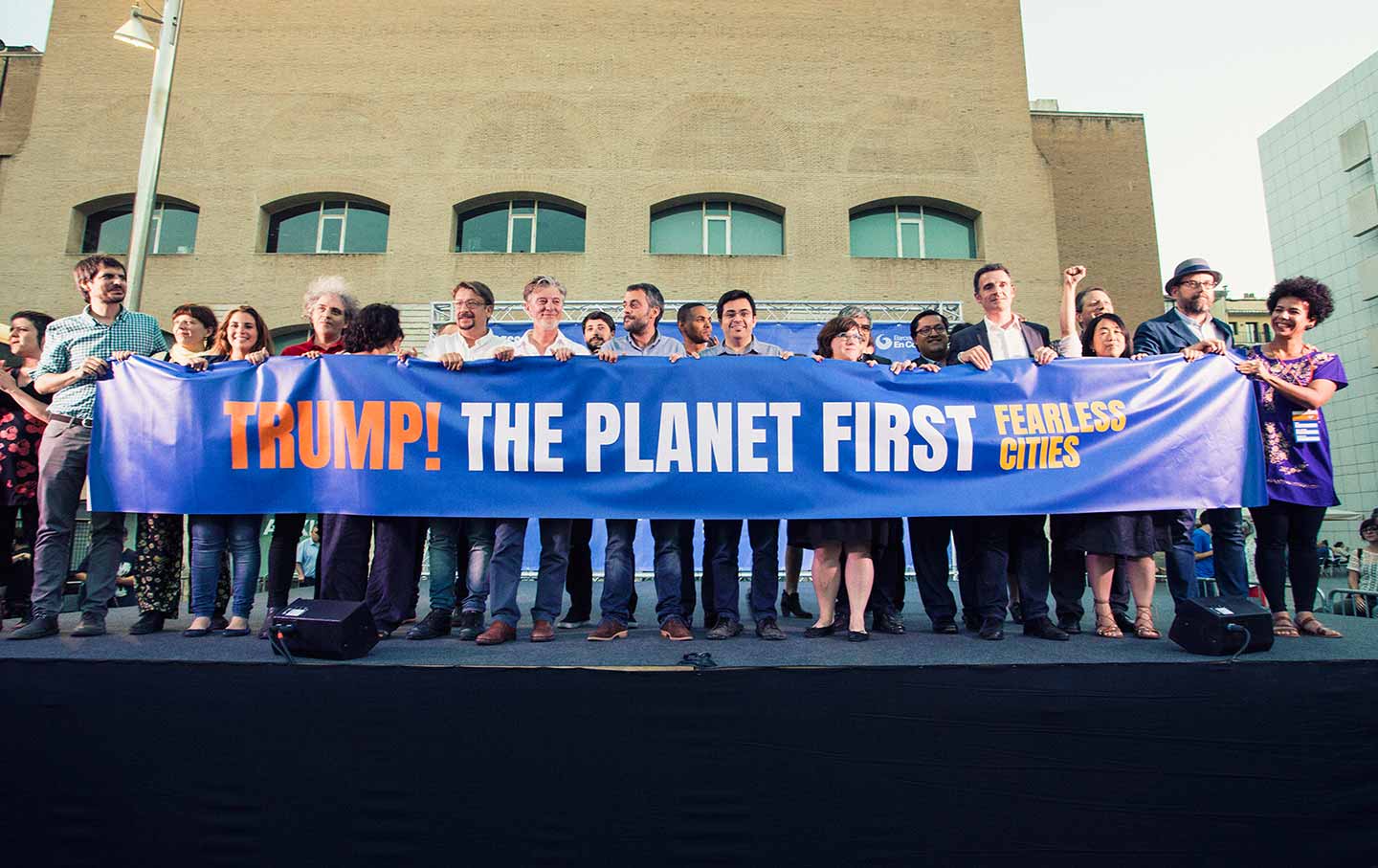 Ever since the early hours of November 9, 2016, an old English word with Greek roots has been seeping back into circulation. The word, kakistocracy, means “a government by the worst people,” and it has struck such a resonant chord that, on June 29, it was the top trending word on Merriam-Webster.com. The immediate cause was a tweet by Joy Reid, but the truth is that it might have happened any day for any of a thousand reasons during the past eight months. The worst people really are full of passionate intensity—and just this past month alone, they managed to fire off a cluster bomb of abominable policies: pulling the United States out of the Paris climate agreement, implementing a Muslim ban (no matter how “partial” or temporary), shelling Syrian civilians, rewinding the clock on Cuba, and plotting to deny health care to 22 million Americans. And that’s just a starter list.

Still: Hope is not entirely lost. In fact, hope, in the form of active resistance is alive and thriving all over the globe—nowhere, perhaps, more so than in the cities and towns where restless souls congregate. From fossil-fuel and private-prison divestment drives to anti-austerity protests and experiments in clean-energy production, urban areas have been busy building visionary movements and making humane policy. When Trump announced his intent to withdraw from the Paris accord on June 1, it was cities—more than 300 of them—that stepped up to declare that they would uphold this country’s commitments to the climate goals.

Kakistocracies don’t fall in a day, and real democracies don’t rise in a year. But in the last month, cities have continued the hard work of loosening the right’s grip on power and building a future that isn’t so goddamn gloomy.

What follows in this month’s “Dispatch from the Urban Resistance” is a sampling of some of that work.

Cities of the World, Unite!

Local organizing is fascism’s foe. That was one of the essential themes beaming out of Barcelona this month, where hundreds of urban organizers and elected officials met for a three-day summit called Fearless Cities. They came from Hong Kong and Rojava, from Valparaiso in Chile and Belo Horizonte in Brazil, from New York City and Jackson, Mississippi, and far beyond to teach and learn and build an international municipalist movement: a movement, that is, that harnesses civil society in cities to revitalize democracy and empower youth, immigrants, refugees, working people, and many, many more.

The conference was organized by Barcelona en Comú, the leftist political coalition that took power in the city in 2015. It included sessions on participatory budgeting, sanctuary and refuge cities, “deprivatization” of energy and water systems, the radical potential of public space, and the fight against gentrification, among other topics.

For those who attended, Fearless Cities was an introduction to the “global movement that is trying to find energy and power in municipalism and in local fights,” says Helen Gym, a Philadelphia City Council member and the vice chair of Local Progress who spoke at the summit. “It was so exciting to be with progressive municipal leaders from all around the world pushing back against state authoritarianism, fighting for the rights of immigrants and refugees, tackling racial justice issues and talking about the essential services like health care, education and transit.”

Gym was particularly energized, she says, by the way that progressive movements in places like Barcelona develop and elect political leaders from within their own ranks, rather than being co-opted by professional politicians. Barcelona en Comú’s horizontalist, from-the-ground-up organizing and electoral work, she argues, is something to aspire to in the United States.

“I found it very inspirational and very instructive,” adds Brad Lander, a New York City Council member and the Chair of Local Progress, who also presented at the summit. “It is a critical moment for cities to both resist the right-wing tide and make progress on our goals, and there are people doing that around the world, and we can learn things from each other.”

In other excellent news, New York has become the first major city to fully divest its public pension funds from the private prison companies that profit from the racism, violence, and corruption of this country’s criminal-justice system. In an announcement on June 8, City Comptroller Scott Stringer announced that New York had sold more than $48 million in stocks and bonds from three different companies—G4S, GEO Group, and CoreCivic. Besides private prisons, the latter two companies also operate for-profit immigration detention facilities. The move comes after multiple media investigations, including several by The Nation, as well as a series of federal audits, found a pattern of human-rights abuses and gross ineptitude across the industry.

“With Donald Trump in the White House, we’re seeing more and more industries try to profit from backwards policies at the expense of immigrants and communities of color,” Stringer said in a statement, when announcing the divestment action. “But because of this major new step, we are demonstrating that we will not be complicit. We are standing up for what’s right.”

Meanwhile, in Los Angeles, the City Council voted unanimously on June 27 to begin taking steps toward divesting $40 million from its holdings in Wells Fargo, which has come under fire in recent years for defrauding consumers, funding the Dakota Access pipeline, financing private prison corporations, and otherwise engaging in disreputable practices. Los Angeles joins numerous other cities, from Seattle, Washington, to Missoula, Montana, that have announced their intentions to cut ties with the banking behemoth.

A Tale of Two Water Systems

Access to good clean water is a fundamental human right, but the predatory and unimaginative among us seek to turn into a source of profit and private wealth. Consider Atlantic City, where residents are currently fighting an effort by Governor Chris Christie to sell or lease their local municipal water provider to corporate interests. Last year the state government took control of the financially distressed city, and it has since gone on a privatization binge of sorts, contracting out the town’s trash collection services to a private company.

A group called AC Citizens Against the State Takeover is trying to prevent a similar fate befalling their water system, which provides good, affordable tap water to 40,000 locals. In the last month alone, the group has organized rallies, collected petition signatures, pressured public officials, and threatened legal action. It is also working to use the ballot initiative process this November to ensure that residents have the opportunity to vote on any attempt to sell the water system. The agents of privatization are at Atlantic City’s door, and the people there are pushing back.

In Philadelphia, meanwhile, a very different, more populist, vision of water provision is taking shape. City officials there debuted a new and improved program this month that will help low-income people pay for their water bills and get out from under debt. The program, which starts accepting enrollees in July, is open to all households in the city with incomes under 150 percent of the federal poverty level as well as those suffering from sudden economic hardship, like job loss or a death in the family. Rather than being charged based on their water usage, those who sign up will be charged between 2 to 4 percent of their household income, a de facto subsidy that will help prevent water payment delinquency. Enrollees will also be eligible to have debt they owe on past water payments suspended and delinquency penalties forgiven. This program amounts to a progressive makeover of municipal water distribution. Philadelphia Councilwoman Maria Quiñones-Sánchez, who sponsored the 2015 legislation that led to the program’s creation, says it is the first of its kind in the country.

“We looked at plans all around the country and there are assistance programs out there, but this one goes much further,” she says. “We believe as many as 60,000 people will able to enroll and receive some sort of support and assistance.” If good clean water is a human right, Philadelphia is intent on providing it no matter how much money you make.

Mayors Step Into the Trumpian Void

There was a second big meeting this month, this one along the low-lying shores of Miami Beach. From June 23–26, members of the US Conference of Mayors met there to chart a course forward for municipal governments in this turbulent, Trump-warped time. And, to put it plainly, the politicians adopted some badass policies while gathered together in the Sunshine State.

The mayors passed a fierce resolution calling on the federal government to do everything in its powers “to lower nuclear tensions through intense diplomatic efforts” with countries like Russia, China, and North Korea. They also called on Congress to shift its fiscal priorities away from militarism and toward programs that provide human services and environmental protection.

Perhaps the most historic resolution pertained to climate change. The conference unanimously voted to adopt a policy encouraging cities across the nation to power themselves on 100 percent clean and renewable energy by 2035. Stephen Benjamin, the mayor of Columbia, South Carolina, and one of the clean-energy resolution’s sponsors, says its enthusiastic passage is evidence that cities are filling the leadership void when it comes to climate action and matters of national importance.

“We may face gridlock and lack of leadership in Washington, but mayors across the country are taking a bipartisan approach and making sure that we respect science and recognize our collective responsibility to think big and act big,” he says. “In spite of no leadership from the White House, we can still get great things done.”

Despite the Trump administration’s craven abdication of its responsibilities, scores of cities across the nation are now embracing clean-energy production and pledging to abide by the 2015 Paris climate accord.