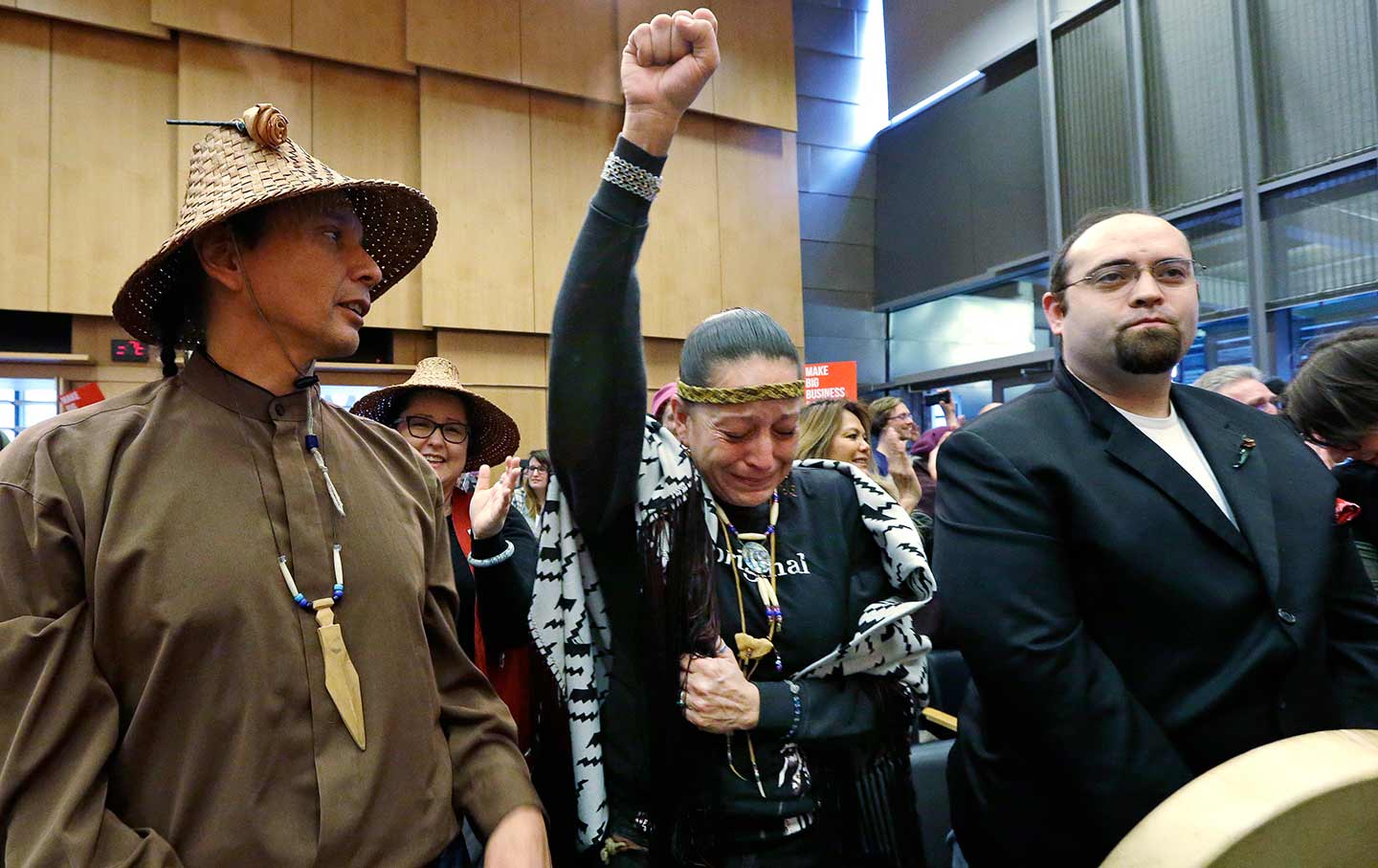 Victory for the Standing Rock Sioux tribe as the Seattle City Council votes to divest from Wells Fargo over its role as a lender to the Dakota Access pipeline project. February 7, 2017. (AP Photo / Elaine Thompson)

Last September, as water protectors faced down militarized police in North Dakota’s rural riverlands, activists in Seattle set out to withdraw municipal money from banks backing the Dakota Access Pipeline (DAPL). Above all, they sought to cut their city’s ties to Wells Fargo, the Wall Street leviathan that has generously financed and serviced the pipeline’s parent companies.

From the start, the Seattle agitators saw their effort as the spark that might ignite a nationwide divestment drive. They meant to be a model.

“We knew if we succeeded here we could create ripple effects in other communities around the country,” says Matt Remle, a member of the Standing Rock Sioux tribe and a leading anti-DAPL organizer in the city.

Divestment campaigners worked with allies on the Seattle City Council, especially Councilmember Kshama Sawant, to draft and introduce an ordinance that would effectively bar the local government from doing business with or investing in Wells Fargo in the future. It was an ambitious ask: Seattle was deeply intertwined with the bank, cycling about $3 billion through the institution each year.

At first, according to Remle, the remaining members of the council were slow to take up and discuss the ordinance. The divestment organizers responded with grassroots pressure: Activists packed City Council chambers, gave testimony at public hearings, staged mass protests at Wells Fargo branches, and even held a house party where people persistently (but politely) called the council president’s phone line.

On February 7, the determined DAPL foes finally got their way. The City Council, in a unanimous vote, committed to severing Seattle’s relationship with Wells Fargo. In their ordinance, the lawmakers condemned the bank for its “dishonest business practices” as well as its pipeline dealings and declared that they would shun the financial giant when its city contract comes up for renewal in 2018. (The council has yet to select an alternative bank or credit union to do business with.)

It was a big win for anti-DAPL activists. It was also just the beginning.

Since the legislation passed, “hundreds of activists around the country have contacted us by e-mail or social media or on the phone,” says Seattle City Council member Sawant, an outspoken socialist politician and committed street activist. “They are asking us: How did you win this? What did you do to build this movement? They want to know what they can do in their cities.”

Seattle organizers are prepared for such inquiries. They have penned a strategy guide that lays out their step-by-step approach to winning in city councils. They’ve developed a website where activists can learn how to launch a divestment campaign. Alongside Sawant, they’ve also participated in conference calls with hundreds of DAPL opponents around the country.

Now, inspired by the Seattle model, campaigners in cities like San Francisco, Los Angeles, New York, Bellingham, Raleigh, Albuquerque, and even Berlin, are bringing DAPL divestment to their communities.

“When I saw Seattle pass its ordinance, I was like, we’ve got to do this,” says Jackie Fielder, a member of the Hidatsa and Cheyenne River Sioux tribes who lives in San Francisco.

In early February, Fielder formed a “Defund DAPL” coalition with local indigenous and environmental organizers. Roughly a month later, on Tuesday, March 14, the coalition scored its first significant victory when the San Francisco Board of Supervisors passed a resolution directing the city treasurer to apply a social screen to current and future municipal investments in order to weed out DAPL profiteers. Companies with ties to DAPL reportedly make up as much as 12 percent, or about $1.2 billion, of the City’s portfolio.

Fielder says the resolution is just the opening salvo. Organizers also want municipal officials to end their long-time relationship with Bank of America, which annually handles $10 billion in City money. The bank, like Wells Fargo, helps provide a multibillion-dollar credit line to the companies developing DAPL. The coalition is pressing the progressive local government to find a more socially responsible financial partner as soon as possible.

As of late February, officials in two other California cities, Davis and Santa Monica, had also pledged to bail on future banking contracts with Wells Fargo. Davis will be withdrawing its $124 million account from the bank; Santa Monica plans to take its $1 billion elsewhere as well.

While urban centers on the West Coast may be the leading edge of this energized divestment movement, they don’t stand alone.

In Albuquerque, New Mexico, activists returned from a solidarity trip to Standing Rock last fall eager “to bring the struggle home,” according to Maya Rommwatt, an environmental organizer there. With support from local chapters of the Sierra Club and the American Indian Movement, among others, they are in the early stages of petitioning both their county and city government to kick Wells Fargo to the curb, Seattle style. The county uses the bank as its principal financial-service agent, while the City had more than $500 million invested with Wells Fargo as of June 2016.

Meanwhile, residents of Raleigh, North Carolina, are proposing a break-up with Wells Fargo too. Elizabeth Miller, an IT worker who lives in the city, has been following the standoff at Standing Rock for months.

“I am not a wealthy person and I work full-time, so it didn’t feel like there was much I could do,” she says. “But then I saw what happened in Seattle, and I figured that is something I could do too.”

A day after the Seattle victory, Miller was on the phone with Matt Remle, seeking guidance from a seasoned activist. With support from her local 350.org group, she filed a public-records request with the City and learned that it banks with Wells Fargo. Last month, she spoke before the City Council and asked that it develop a social-responsibility ordinance that would prohibit city contracts with businesses that support the fossil-fuel industry or are tied to human-rights violations. Miller says progressive councilmembers were receptive to her request. She is now at work drafting a social-responsibility plan to present to the local legislators.

By now, the divestment numbers are getting hard to ignore. Between Davis, Santa Monica, and Seattle alone—the three cities that have opted to sever their ties with Wells Fargo—the campaign will ultimately deprive Wells Fargo of more than $4 billion in deposits, fees, and more. Admittedly, that figure is only a tiny portion of the bank’s $1 trillion in annual deposits, but that doesn’t mean that DAPL divestment is mere symbolism.

Movements require momentum and, from that vantage point, something important is happening here.

“Fighting against climate change, fighting for a new direction for our planet and environment, fighting for the rights of oppressed people will require fighting the financial oligarchy and the oil lobby as a whole,” says Seattle’s Sawant. “For a movement led by indigenous and environmental activists to deliver this kind of blow to any arm of that oligarchy is very noteworthy.”