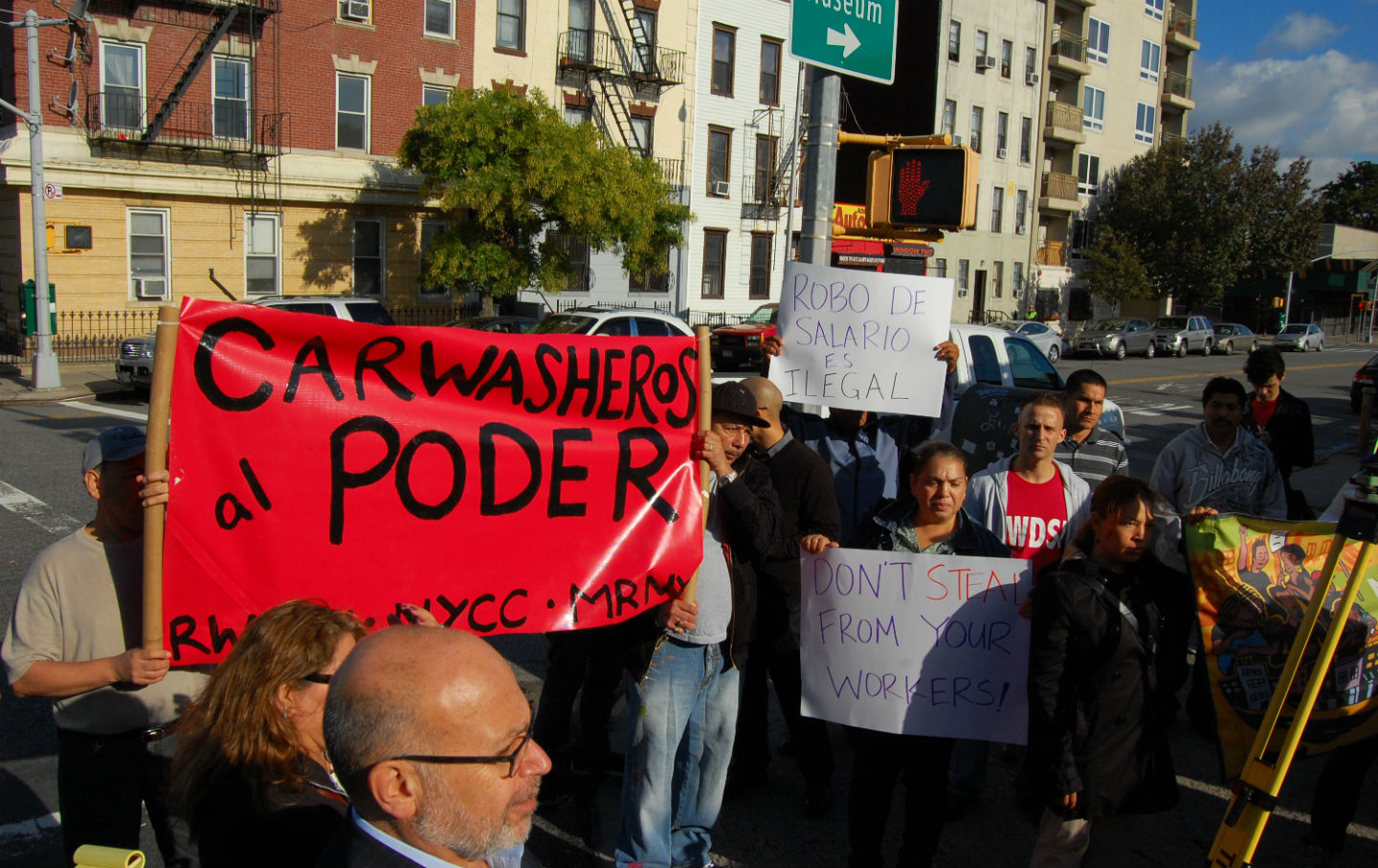 It only takes a few minutes for New York City motorists to sweep through a carwash; it may take weeks for the guy wiping your hubcaps to see his first paycheck. That’s why the New York City Council just pushed through landmark legislation to revamp labor protections in one of the city’s least-regulated industries and pave the way for unionization.

The new licensing rules aim to prevent the wage theft that drives one of the classic little luxuries of urban life. Carwashes are known as a “runaway” industry (think nail-salon equivalent for car lovers) running on the exploitation of immigrant workers. The carwasheros campaign, supported by community groups and the Retail, Wholesale and Department Store Union and United Food and Commercial Workers, exposed the brutal labor conditions in a survey of local workers, which showed wages could run as low as $125 per week, “with some working as high as 105 hours.” The majority earned less than minimum wage and were often denied overtime. The murky tipped-wage system has allowed employers to pay a lower base wage and leave it to impoverished workers to earn the rest off of discretionary tips.

As with many service industries, unpredictable, erratic schedules mean that on any given workday a carwasher could be saddled with a 13-hour shift, or get sent home in the morning on the boss’s whim without the legally entitled compensation pay. Sometimes the job actually costs them money. Carwashero Rafael Ignizio testified before the City Council last year that while his wages started at just $3 an hour, “We also had to share our tips with the managers, the cashiers, and the assistant manager. We also had to pay out of our tips anything that was damaged or broken in the car wash, mirrors, antennas, anything really that was damaged.”

Ignizio and his co-workers were later thwarted when they tried to sue the boss for back wages: using a common tactic of evasion, “she just sold the car wash, erased everything from under her name, and technically disappeared.”

The new legislation establishes a licensing scheme requiring carwash operators to submit to city oversight on labor and environmental standards. They would also be subject to a “surety bond”—modeled on a recently passed law in California—to help guard against wage theft and keep bosses from vanishing in order to avoid paying legally owed backwages. The law complements the unions’ work by incorporating labor organizing into the regulatory regime.

Though the newly passed licensing program parallels that of many other service sectors in the city, carwash owners claim they risk being driven toward bankruptcy. With only nine unionized carwashes out of roughly 200 citywide, owners have assailed a provision that sets a higher indemnity rate for nonunion businesses (a $150,000 bond versus just a $30,000 bond for employers under a union contract or legal settlement—reflecting the rationale that a collectively bargained contract provides its own form of insurance and saves regulatory costs in the long run). Steve Rotlevi of the Association of Car Wash Owners, told the New York Times the rule amounted to “a legislative extortion scheme.”

But advocates say that the indirect premium businesses pay for going non-union reflects the real union advantage that workers get. Rocio Valerio, a campaign organizer with New York Communities for Change, tells The Nation that advocates learned from their experience with this industry, “The only time that we actually eliminated wage theft was when workers were under a bargaining agreement. It didn’t matter whether the [Labor Department] had gone there twice.… It was only when we had a union contract that the workers saw that all of their tips were accounted for, that all of their hours were accounted for.”

Valerio balked at owners’ complaints about the financial burden of licensing, challenging any business model in which a profit stream depends on the ease with which bosses can rob their workers.

“We have one worker who did not have a home, who had been working, and didn’t have a place to stay…because he couldn’t afford the rent,” she says. “So I think that for folks who have been making marginal…‘profits’ out of this business, out of the paychecks of already extremely low-wage workers, I would say you have no business doing business.”

A side benefit of the new law is that this notoriously wasteful and polluting industry might get a little cleaner, because the licensing standards demand compliance with environmental rules.

As with nail salons stuffed with cosmetic toxins, the cleaning products sloshing through a typical carwash pose chemical threats. Workers have reported suffering skin and respiratory irritation after exposure to workplace chemicals, and being denied safety training and protective equipment. One worker in the survey recalled that after suffering hair loss and inflammation that he attributed to a strong soap, “I didn’t say anything at the time, because I didn’t know there were laws to protect me, as an immigrant, and I was also afraid that I would lose my job.”

The occupational health risks can spill into the environment. Health experts have warned that dumping of untreated wastewater could pour harmful chemicals into city waterways.

Hazardous discharges could be stopped at the source, perhaps, if workers weren’t routinely pressured to toss detergents and chemical sludge into the street. Ignizio testified: “I definitely witnessed the chemicals being dumped into the sewer system. In this new car wash where I’m at. I see them kind of dumping it in the canals…The management has asked me to do it, and I’ve done it.”

When workers are oppressed, they’re deterred from holding employers accountable for harming the public. As one worker explained in the survey, “The treatment we receive makes us feel powerless. They yell at us, they disrespect us, and they treat us as if we are not even human beings.”

By merging worker protection and sustainability goals, the new law actually makes driving in the city a little better for everyone, by cleaning up the industry and the environment in tandem, just by giving the guy cleaning your car the power to do his job right.