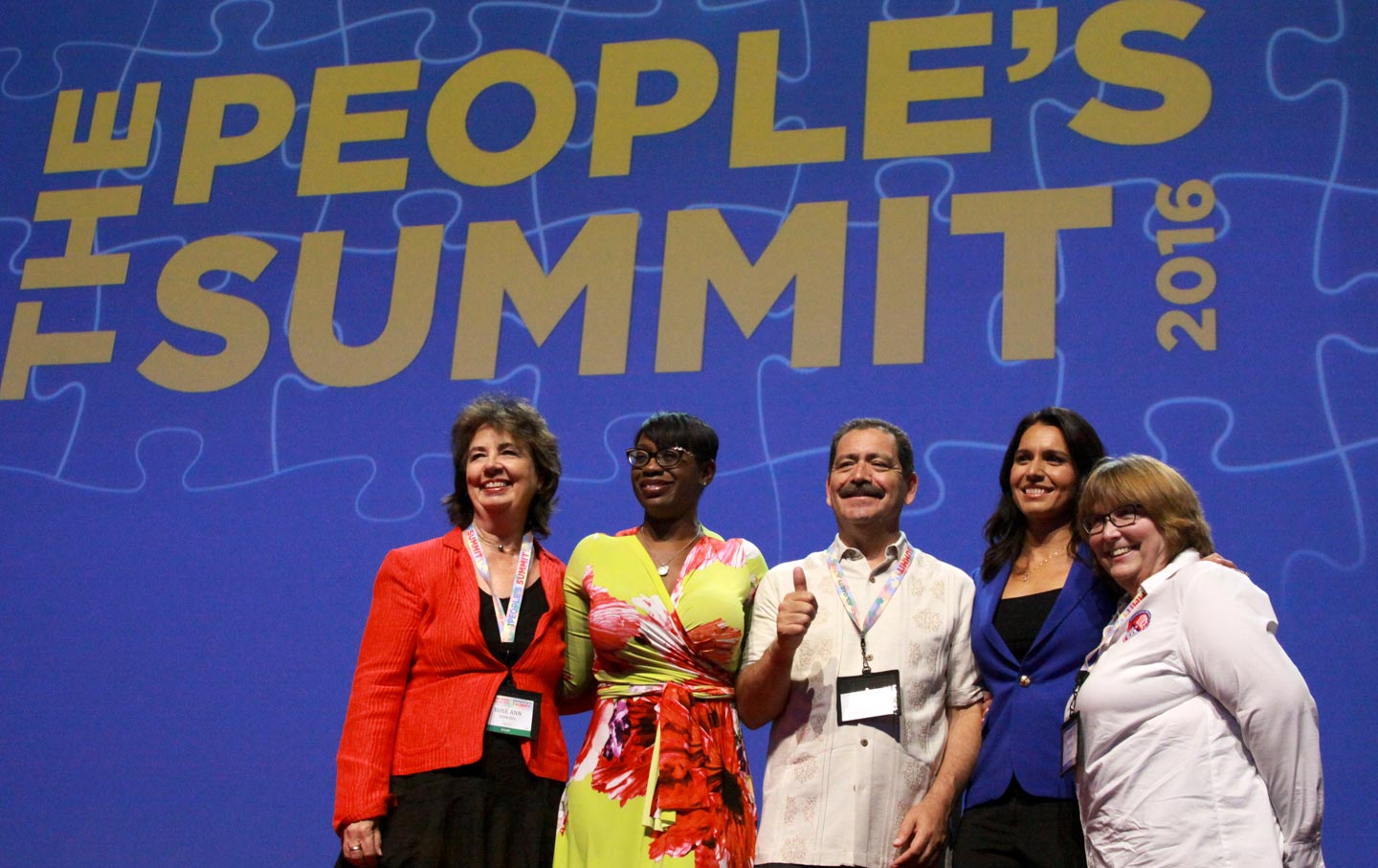 Chicago—Maybe what you saw at the People’s Summit that just finished here yesterday depends on where you came from. If, like Dominique Scott, an organizer at United Students Against Sweatshops at Ole Miss, you come from a state where the Confederate battle emblem is still part of the state flag and where the threat of racist violence is not at all abstract, you saw a gathering of friends and allies, a place where you could admit to feeling “discouraged about the moment we’re in right now” and “distraught that the two choices that I get” in November—Hillary Clinton or Donald Trump—“are two people who do not represent me.”

For Mindy Rosier, a special-ed teacher from New York who “got activated because my school got co-located with a charter school, and I realized I needed to fight to protect my kids,” the summit was a chance to keep fighting, find allies and inspiration—and have some fun.

Mohammad Khan, an organizer from MPower Change, a grassroots movement based in the US Muslim community, was in Chicago standing with LGBTQ activists cheering Cook County Commissioner Chuy Garcia and rising to his feet with everyone else in the hall when Nina Turner, the former Ohio state senator who lit up so many Sanders rallies in the past few months, told the crowd, “We need folks elected to office who actually give a shit about the people they represent.”

Or, if you came down from the Olympian heights of The New York Times, you saw a ragtag collection of Sanders “die-hards” assembled against “a backdrop of Twister games, Lego sculptures and beanbag throwing contests.”

Maybe I’m just bitter that nobody invited me to the Twister zone, but coming from London—where a political argument about what kind of world we want to live in and what kind of relationship we want to have with Europe turned murderous and took a young woman’s life—what I saw in Chicago was a warm, lively, hopeful, well-organized gathering of 3,000 people whose biggest discovery in the past year has been not that the system is rigged (we already knew that) but our own astonishing strength. And who have no intention of giving up that strength and falling quietly in line behind Hillary Clinton or anyone else.

“Once you know something you can’t un-know it. Now we know how powerful we are.” —Rosario Dawson

“Once you know something you can’t un-know it,” the activist and actor Rosario Dawson told the crowd. “Now we know how powerful we are.”

The task now is to figure out how to preserve and grow that power, and how to use it most effectively in a time of great danger, and when the stakes for our country, and our movements, couldn’t be higher. And what may have seemed frustrating to those in search of a quick sound bite—namely the lack of a unified, coherent agenda going forward—actually struck me as a sign that no one was being stampeded, or shepherded, or rounded up to be delivered to Clinton or anyone else. Which is a tribute to the National Nurses United, who tacked this “gathering of the tribes” onto the end of their annual convention here, and proof that when Winnie Wong, the Occupy Wall Street veteran who co-founded People for Bernie, the group which co-sponsored the summit, told me that, instead of a list of demands, “I want to see a thousand lovely parasols,” she meant it.

“We aren’t going to try to tell people what they need to care about,” said Charles Lencher, another co-founder of People for Bernie. “Our job is to reflect back at them what they already care about—and then get them to take action.”

For some, that means going to Philadelphia, where Sanders backers will be both inside the hall—like Mike Fox, Florida state coordinator of Progressive Democrats of America, or Waleed Shahid of the Working Families Party, who will be among the nearly 1,900 Sanders delegates—and outside on the streets.  If you believe—as Sanders and his supporters do—that pushing the party away from corporate accommodation and towards a more populist, more “democratic” direction is actually crucial to defeating Donald Trump in November, then both are necessary. Because while those inside the hall are able to communicate demands, and negotiate, their power to do so stems from those outside—not just on the strength of their numbers but also on their willingness to obstruct or disrupt if those inside are ignored or muscled out of the way.

“Politicians will do nothing unless they are backed by social movements.” —Naomi Klein

“Politicians will do nothing,” Nation columnist and author Naomi Klein said in her remarks, “unless they are backed by social movements and accountable to those movements.”

RoseAnn DeMoro, executive director of the NNU, who had just come from testifying before the Democratic Party Platform drafting committee, recounted how “they kept trying to box me in to saying the ACA [Affordable Care Act] is good enough.” Instead, she told them that nurses still “see patients who cut their prescriptions in half…or never fill prescriptions” and “patients who skip…vital care” because they can’t afford the co-pay.

For others it means staying home and running for office in their local communities. Carlos Ramirez-Rosa, a 27-year-old immigrant-rights activist who became Chicago’s youngest alderman, urged others to “call up your friends, knock on doors, and get out there. We’re letting the right and the corporations win when we count ourselves out.”

If the summit had any common theme, it may have been “Don’t count us out.” Though there were more than a handful of Bernie-or-busters in attendance—the estimates I heard ranged from 10 to 35 percent of a gathering that itself drew heavily from the left wing of the Sanders political revolution—Becky Bond, a former senior adviser to the campaign, spoke for a much greater proportion when she said, “Bernie didn’t create this movement. He recognized the movement moment we are in.”

Bond also gave the most concise explanation of why the kind of manifesto drafting so beloved of past revolutions—from Philadelphia in 1776 to Port Huron two centuries later—is neither possible nor relevant this time. “We can’t pick an order,” said Bond, or decide whose priorities are more important—whether racial justice takes a back seat to economic justice, or ending the use of fossil fuels has to wait for universal health care. Especially when, as Representative Tulsi Gabbard reminded us, the foreign-policy establishment is gearing up for another war for regime change in Syria which needs to be opposed and resisted right now.

“We have to do it all together,” said Bond. Which is hard. And complicated. And doesn’t offer any easy answers to what to do between now and November.

Frances Fox Piven, the veteran activist who has been mentoring movements for a half-century, did tell the group that, faced with the real risk of a Trump presidency rolling back decades of social progress, “we have to elect Hilary Clinton to defeat Donald Trump.  You may not like it, but we do.” However, Piven also reminded us that “movements flourish when there are politicians in office who have reasons to be afraid of them.”

Piven argued that while a smart, strategic engagement with electoral politics is absolutely necessary—especially given the stakes in November—it will never be sufficient to bring about real change by itself. “Electoral politics can also smother movements,” Piven warned.

So if I left Chicago without a clear sense of which way the political revolution would be headed after November—still no certainty about what form it would take, or how much of it will survive—I also came away impressed by the creativity, energy, optimism, and willingness to listen of the people I met. We may all have to walk a while past the political graveyard. But we have good company—and plenty of tunes to whistle.