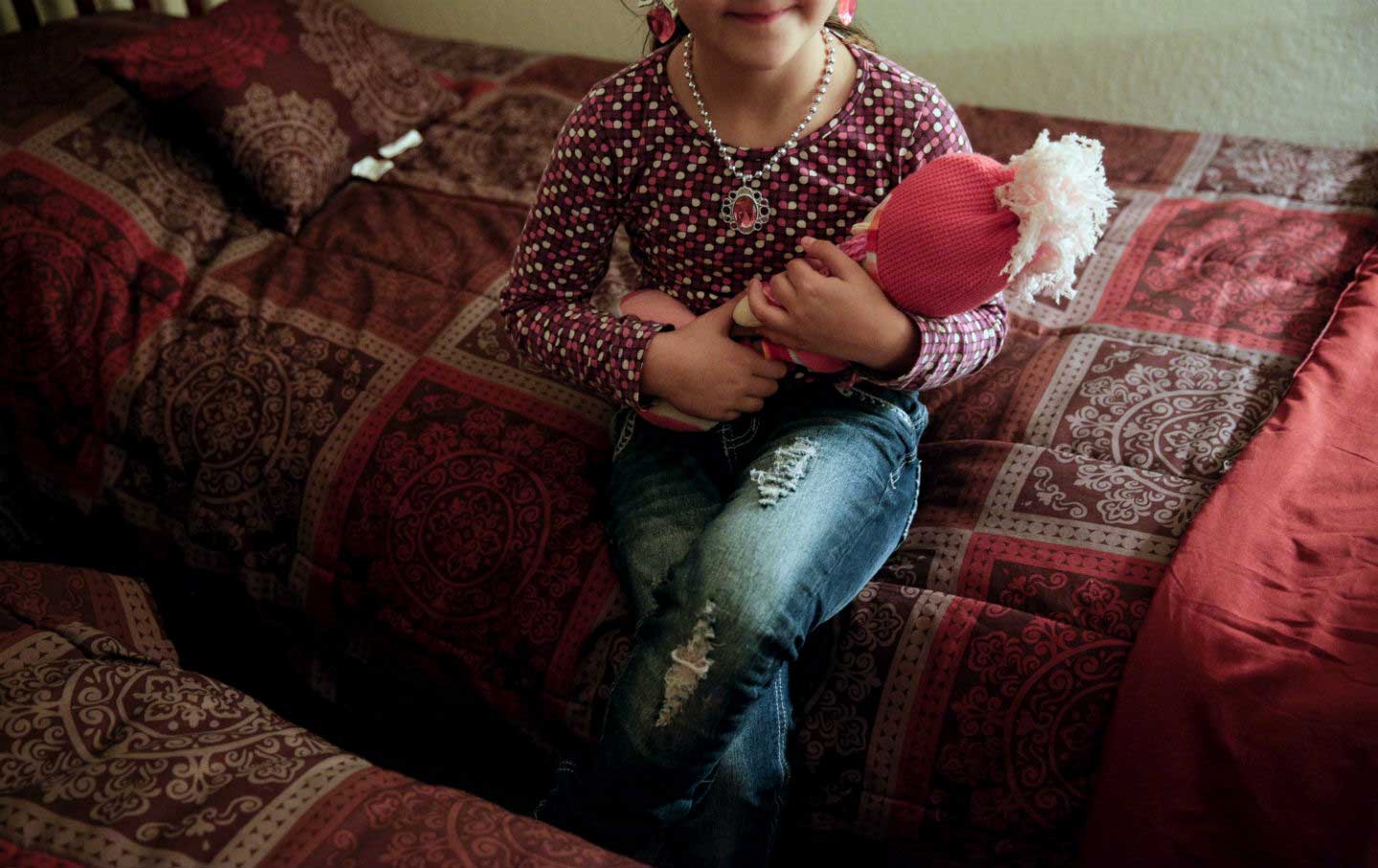 Five-year-old Leen, a Syrian refugee, poses for a portrait in her bedroom on November 16, 2015. Leen and her family fled violence in Syria three and a half years ago and arrived in Sacramento, California. (Reuters / Max Whittaker)

Donald Trump’s indefinite ban on resettling Syrian refugees is not only a shining model of moral cowardice, it’s also premised on a falsehood that’s every bit as egregious and readily debunked as his claims that he won the popular vote or that God parted the clouds for his inauguration speech.

Throughout the campaign, Trump claimed that resettling refugees, especially from Syria, in the United States posed dangers. Calling Syrians fleeing the bloodshed we helped create a potential “Trojan Horse,” Trump repeatedly claimed, as he put it at a campaign stop in Rhode Island last spring, that “we don’t know anything about them. We don’t know where they come from, who they are. There’s no documentation. We have our incompetent government people letting ’em in by the thousands, and who knows, who knows, maybe it’s ISIS.”

But nothing could be further from reality, says Rebecca Hamlin, an assistant professor of legal studies at the University of Massachusetts Amherst and author of Let Me Be a Refugee: Administrative Justice and the Politics of Asylum in the United States, Canada, and Australia. “Refugees are the most carefully vetted visa category out there. They already go through a process that can take up to two years.”

In an interview for my show, Politics and Reality Radio, Hamlin described the process:

First, what happens is the United Nations high commissioner for refugees goes through its very careful and thorough screening process, trying to understand what circumstances led the person to try to seek asylum or refuge. Once they’ve gone through their clearance process, they designate a set of people who they recommend to the United States for resettlement. Then we begin our own vetting process, which includes high-level security clearance. It includes medical checks. It even includes a cultural orientation.

Our refugee program really puts a lot of priority on families, small children, the elderly. Of the just under 2,000 Syrian refugees we’ve taken in over the past few years, 48 percent of those are minors. They are under 18 years old. A good percentage are also elderly people. The remaining, many of them are the mothers of the children that we’re talking about. Really, the most vulnerable people are the ones that are prioritized.

In 2015, when congressional Republicans passed legislation that would have blocked virtually all Syrian refugees, a State Department spokesperson said that only 2 percent of them were “military-aged males” traveling without family. “Our emphasis is on admitting the most vulnerable Syrians—particularly survivors of violence and torture, those with severe medical conditions, and women and children—in a manner that is consistent with U.S. national security,” he said.

“Refugees are the most carefully vetted visa category out there.”

Hamlin says the current vetting process “is already so thorough that for the security checks to be increased any more, it would really make it all but impossible for anyone to actually succeed through this program.” She added: “These people are not just vulnerable people to whom we may owe some moral duty to protect. They’re also people who are fleeing the exact terrorists that we’re talking about targeting. They’re fleeing ISIS. They’re fleeing Al Qaeda. They are victims of terrorism themselves.”

It should go without saying that a heavily vetted population largely made up of women and children and the elderly and infirm poses little threat to our national security. Indeed, an analysis conducted by The Economist in the fall of 2015 found that the United States had resettled 750,000 refugees from around the world, and not one had been responsible for an act of terror in this country (one had been arrested on a terror charge, but a court found him not guilty). Last year, a Somali refugee who, according to law-enforcement officials, had been influenced by ISIS propaganda, was the first to be charged for an act of terror in the United States, but officials say he was a “lone wolf” who had not been in contact with any organized terror groups. He wounded several people with a knife, but there were no fatalities. (Some media incorrectly reported that the Tsarnaev brothers were refugees, but their parents entered the country on a tourist visa and then applied for asylum—a very different process.)

All of this has been confirmed by State Department officials and widely reported in the mainstream media (according to CNN’s Brian Stelter, the State Department’s “Myths and Facts on Refugees” page was recently removed from State.gov). But as Caitlin Dickerson reported for The New York Times, “ultraconservative websites like Breitbart News and Infowars have published a cycle of eye-popping stories with misleading claims about refugees.” Dickerson details how these outlets have offered horrifying takes “about a refugee rape crisis, a refugee flesh-eating disease epidemic and a refugee-related risk of female genital mutilation—none of it true.” The fear-mongering may have reached a zenith—or nadir—with a piece in The Federalist titled, “Why Women And Child Refugees Are A Threat.”

As a result, Trump isn’t alone in embracing the idea that these desperate civilians fleeing the carnage in Syria or other combat zones pose a serious security threat—it’s a view, based on false claims and a dubious “study,” that’s widely held throughout the conservative movement. And just as the specter of widespread “voter fraud” wasn’t shaken when the Bush administration pursued a five-year investigation that found that in-person fraud is exceptionally rare, this “alt-fact” appears to be unshakable.

And with this mendacious premise in hand, Trump issued a sprawling executive order that wasn’t reviewed by any of the relevant agencies, and which caused a weekend of chaos in the United States and abroad. Benjamin Wittes, a senior fellow in Governance Studies at the Brookings Institution, wrote, “The malevolence of President Trump’s executive order on visas and refugees is mitigated chiefly—and perhaps only—by the astonishing incompetence of its drafting and construction.” None of the 9/11 hijackers’ four countries of origin are included in the ban. In addition to refugees, it barred green-card holders and those who’d risked their lives working side by side with US troops in Iraq and Afghanistan.

It’s entirely possible that some of them will be killed as a result—it’s happened before. As such, Trump’s ham-fisted executive order only undermines our national security—why would anyone in these countries work with our troops when they know there’s a good chance they’ll be left out to dry by our leaders when they need our help? And of course, it’s reportedly a boon to jihadist groups, confirming the late Al Qaeda leader Anwar al-Awlaki’s prediction that the “West would eventually turn against its Muslim citizens.” It’s no wonder that, as The Washington Post reported, jihadist groups “celebrated the Trump administration’s ban on travel from seven Muslim-majority countries.”