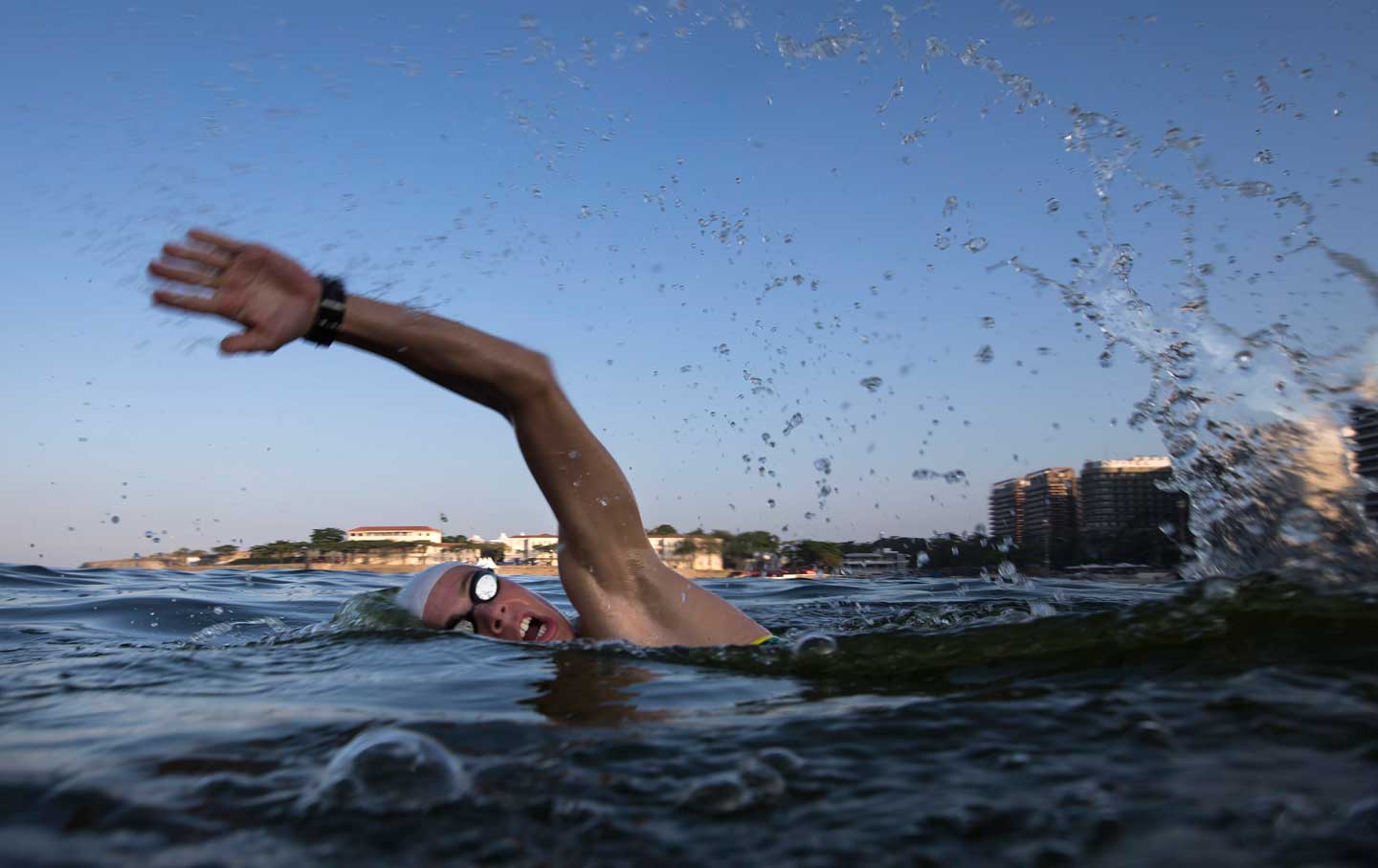 A triathlete trains in the waters off Copacabana beach, despite published warnings that water in the area was "unfit" for swimming, in Rio de Janeiro, Brazil, Friday, July 31, 2015. (AP Photo / Felipe Dana)

It is a cheap and easy metaphor, made no more sophisticated or amusing by the fact that it is true. The Rio 2016 Olympics are caked in all kinds of shit. There’s the bullshit of broken promises about the benefits that the Games would bring, and then there is the actual literal shit, long a reality in Rio and now visible to the world. The rivers, streams, and oceans are filled with floating feces, as the raw sewage of the city is, per custom, pumped directly into the water. Even the most pristine appearing of beaches are, in the words of an Associated Press report, “thick with putrid sludge.” And its Olympic lake, Rodrigo de Freitas, is “littered with rotting fish.”

This is an Olympic sized problem, as athletes who participate in water sports will carry, in the words of Kristina Mena, an expert in waterborne viruses, “an infection risk of 99 percent.” As of this writing not one of the many water venues has been deemed safe for swimming or boating with waterborne virus levels in the water amounting to 1.7 million times the level of what would be dangerous in Southern California. John Griffith, a marine biologist at the Southern California Coastal Water Research Project said to the AP. “It’s all the water from the toilets and the showers and whatever people put down their sinks, all mixed up, and it’s going out into the beach waters. Those kinds of things would be shut down immediately if found here.”

Austrian sailors who practiced briefly in the Rio waters left the experience with violent vomiting, fevers, diarrhea and IVs in their arms. And these are the sailors. Imagine those who compete in what is called “The Olympic Marathon,” a 10 kilometer race that means two hours in this water for competitors.

Emily White, co-founder of Dreamfuel and manager of many elite swimmers said to me, “There have been countless examples of terrible water conditions for our open water athletes over the past decade, however the water analyses coming out of Rio are truly horrifying. Yes, not every sport at the Olympics is on or in water, but clearly the choice in location of the open water races in Rio did not take the athletes’ health or safety into consideration. Athletes are the reason the events exist in the first place—they need to be the absolute priority in all decisions made surrounding the races they compete in.”

This horror story also, if nothing else, sheds light on what has been a consistent problem in Rio for decades, and one that has only worsened as the city has become increasingly wealthy and increasingly unequal. As Juliana Barbassa, longtime Rio journalist and author of the new book Dancing with the Devil in the City of God: Rio de Janeiro on the Brink said to me, “Rio’s foul waters are a symptom of larger government inability to meet people’s basic needs.”

This is accurate. Brazil is one of the wealthiest nations on earth: a 21st century ascendant power with a 19th century sewage system. One of the cruelest lies of this World Cup/Olympic experience in Rio is that hosting these international sporting events was sold to the people in part by saying that it would provide an opportunity to finally upgrade their waste management system. Yes, the argument was that spending billions in public funds for the World Cup and the Olympics would be a more sensible path toward better sewage treatment than perhaps… just spending billions to upgrade the sewage system.

The only benefit of the Olympics—and it’s a benefit born of irony—is that at least we are talking about this constant health risk that has long stalked the people of the city. Yet crediting the Olympics for this is like crediting racist police officers for launching the #BlackLivesMatter movement. Yes, they were a necessary ingredient, but that is all.

What is particularly noxious is that, as in so much in Rio, the favelados (people who live in the precarious communities known as favelas) are being blamed for this: as if the poor having nowhere to send their sewage are just piling it in the river. Actually, it’s the expansion of Rio, the growth of big massive hotels and gated communities that are pumping their poop into the waters. That is why some of the city’s most beautiful beaches are also the most abandoned. These Olympic waters are hazardous for athletes and hazardous for the people of Rio. If there was ever a reason for the social movements of the city resisting the Olympic monolith and the athletes to come together, it should be for this: that most basic, elemental, and increasingly scarce of rights: clean water.