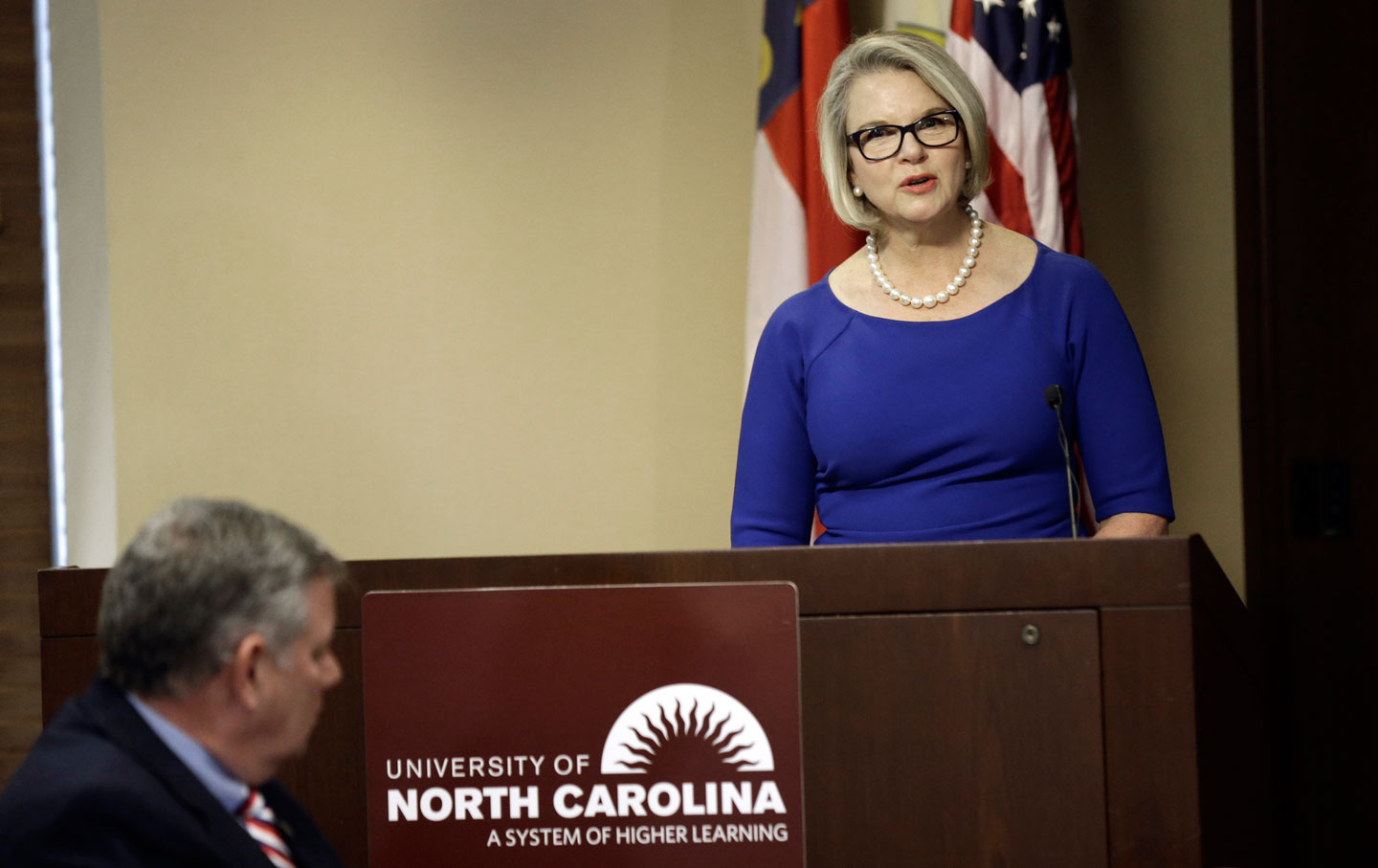 After the board that governs the University of North Carolina unexpectedly fired system president Tom Ross in January, there were murmurs that it might replace Ross with conservative kingmaker Art Pope. Pope and the web of think tanks and political groups he funds have long envisioned radical changes in the university system, as I reported in June. While Ross was respected by faculty, he was also a Democrat; UNC’s Board of Governors is appointed by the legislature, which flipped Republican in 2010. Many interpreted Ross’s ouster as the beginning of an ideological purge. Indeed, in the months that followed the board and legislature made a number of moves with troubling implications for intellectual freedom and accessibility at what has long been one of the country’s most celebrated public universities.

Pope himself was not really a plausible replacement; his appointment would have been too transparently political, and his network has clashed with (comparatively) moderate elements on the board and in the legislature. When the board made a selection in late October it chose someone outside the state’s conservative machinery: Margaret Spellings, former secretary of education under George W. Bush. Spellings is a seasoned political operative; Karl Rove introduced her to Bush, and she went on to direct his campaign for Texas governor and follow him to the White House. She is the latest in a string of politicians and former executives—including former homeland security secretary Janet Napolitano at the University of California, and Timothy Wolfe, who resigned Monday after protests at the University of Missouri—to be installed at the helm of a public university. She’s not Pope, but her track record gives those concerned about the corporatization of higher education something to worry about nonetheless.

At the Department of Education, Spellings tried to bring the focus on performance metrics and accountability that drove No Child Left Behind in higher-education policy. She convened a Commission on the Future of Higher Education, whose final report referred to students as “consumers,” and lauded elements of the for-profit education industry for embracing “an aggressive, outcomes-based approach.” Ironically, it’s the for-profit industry that has failed most egregiously since then to produce positive results for students. Kaplan Higher Education, one of the companies praised in the Spellings report, was forced to refund over a million dollars to hundreds of students in January after a federal investigation into the hiring of unqualified instructors, and another $1.3 million in July.

Spellings went on to work in the troubled for-profit industry after leaving the White House—an experience, she told UNC’s board of governors, that taught her “a lot about how we can serve our students and think of them as customers in providing a product in convenient ways for them.” Beginning in 2012 she served on the board of the Apollo Group, the parent company of for-profit chain University of Phoenix. That “diploma factory” is now under investigation by the Federal Trade Commission, in part for its aggressive recruiting of military veterans. Its online program has a graduation rate of just 7.3 percent, and the student loan default rate is up 5 percent from the national average.

Spellings also chaired the board of the Ceannate Corporation, a student loan–collection agency. It’s not surprising that she had connections there: During Spellings’s tenure the education department was accused of acting “as a wholly owned subsidiary” of the student-loan industry. Preying on student borrowers is lucrative business: profit margins for loan collectors average 30 percent. “Despite widespread calls to reform the student loan industry, Spellings and the Ceannate Corporation have simply profited off of it,” two UNC professors wrote in a recent op-ed. “Spellings’ defense of for-profit colleges [following her appointment] is perhaps just as disturbing as the predatory practices these institutions use to fleece students.”

Spellings has also come under fire for homophobia. She used her second day as education secretary to send a letter to the chief executive of PBS, admonishing her for a brief, unaired scene on a show called Postcards From Buster that depicted a same-sex couple. “Many parents would not want their young children exposed to the lifestyles portrayed in the episode,” she wrote. Spellings asked for the network to return the public funds that had been used to film it. Asked about the comments after her election to the top post at UNC, she said, “I’m not going to comment on those lifestyles.” She defended her actions, arguing that it was “a matter of how we use taxpayer dollars,” not about “any particular view” on “particular groups of people.”

Spellings comes to UNC with the support of Republican Governor Pat McCrory and the Board of Governors, but not of faculty leaders, who objected to the secretive process by which she was selected (as did some legislators and members of the board). She’ll receive a starting salary of $775,000—$175,000 more than what Ross is paid now. The board has already started pushing the system towards a corporate model: Shortly after Spellings was hired, the board voted to give raises ranging from 8 to 19 percent to a dozen chancellors. University faculty and employees, on the other hand, got a one-time payment of $750 from the legislature, after years of a pay freeze—a token that one employee described as being “spit in the face.”

One of Spellings’s crucial tests will be in how she handles the slow erosion of accessibility at UNC, which has long prided itself in being a truly public institution. Tuition has gone up by more than a third since 2008, and earlier this year the board put a cap on financial aid that may make things harder for nearly 22,000 low-income students. In a press conference following her appointment, Spellings talked vaguely about closing the gap in graduation rates for poor and minority students—a worthy goal, but one that depends first on their ability to pay the price of admission.