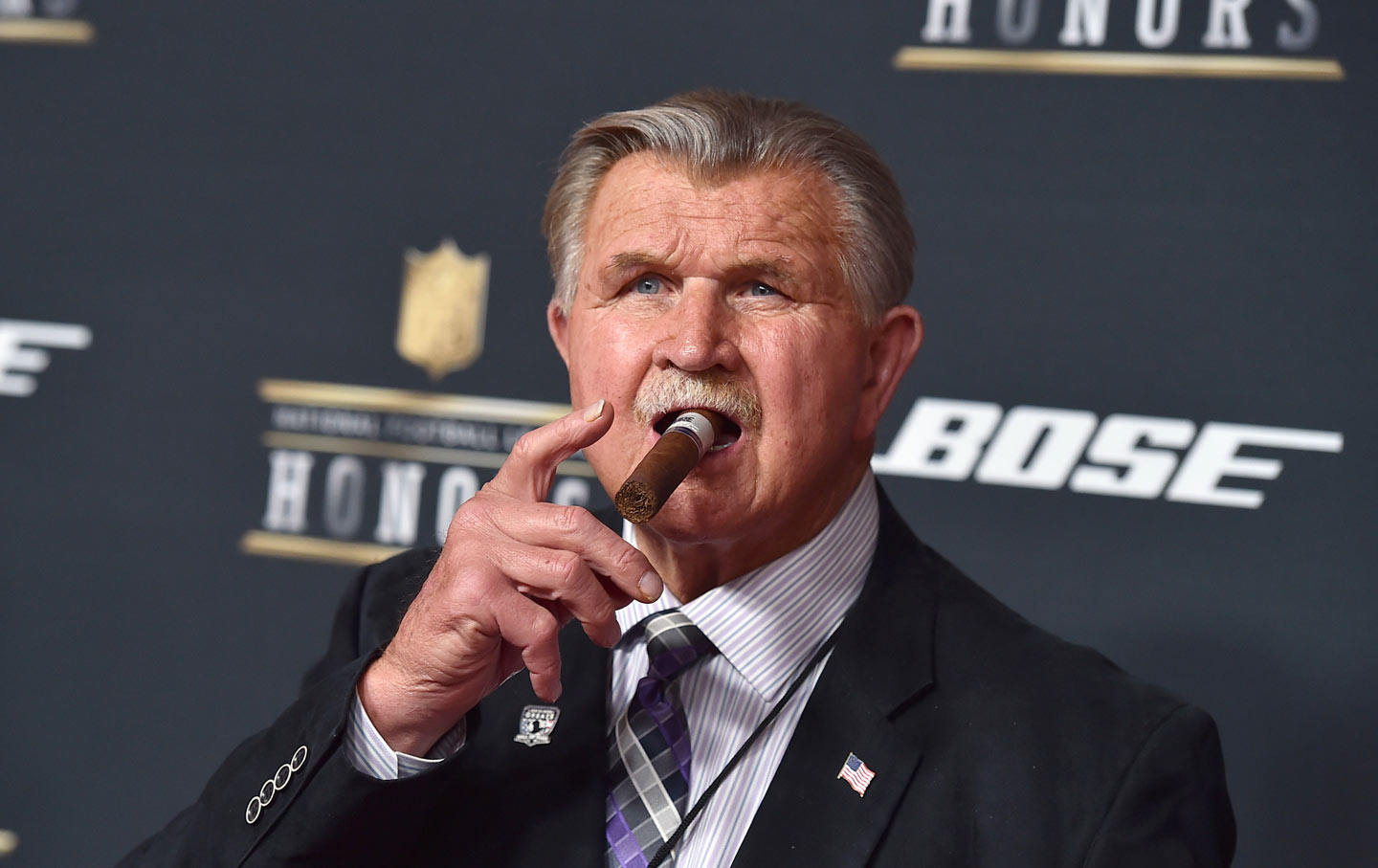 Onetime Chicago Bears football coach Mike Ditka has not been in charge of an NFL team for 17 years, but the business of being “Iron Mike” has never stopped booming. He’s the tough-as-nails head football coach who’s always ready to shill for any product within arm’s distance or play himself in a Will Ferrell movie. When on ESPN, he is forever armed with a sharp rant and is perhaps their only talent—other than maybe Chis Berman—who can pass gas on live television and make it come off as lovable. That’s just Ditka being Ditka.

But there is another side to Mike Ditka. He’s the guy who was accused of sending players back into games with concussions. He’s the guy who was described this way by former Bears safety Dave Duerson: “Mike was not one who gave a damn about the players or their injuries when he was coaching.” Duerson later took his own life, and in death was diagnosed the brain disease CTE.

Ditka is the guy who berated his own Bears players for not crossing a picket line when the NFLPA was on strike in 1987. He’s the guy today who—after a lifetime of supporting right-wing candidates—shills for another dubious product: Donald Trump.

And now, true to form, he’s coming out against Colin Kaepernick’s anthem protests. On Friday, he said on the Shan & RJ radio show, “I think it’s a problem. Anybody who disrespects this country and the flag. If they don’t like the country they don’t like our flag, get the hell out. My choice is, I like this country, I respect our flag, and I don’t see all the atrocities going on in this country that people say are going on,” Ditka said. “I see opportunities if people want to look for opportunity. Now, if they don’t want to look for them then you can find problems with anything, but this is the land of opportunity because you can be anything you want to be if you work. If you don’t work, that’s a different problem.”

Mike Ditka, as mentioned, is a Trump endorser—and he is parroting the candidate who in August said that Kaepernick should “maybe should find another country to live in.” Trump undoubtedly knows that this kind of statement is a racist dog whistle, that when you tell someone who is descended from the enslaved people that built the United States to shut up or find another country, you are telling them—in classic KKK fashion—to “go back to Africa.” This is as true today as it was when a member of Congress said it to singer and civil-rights icon Paul Robeson, and Robeson’s response is still the correct one. He said:

Because my father was a slave, and my people died to build this country, and I am going to stay here, and have a part of it just like you. And no Fascist-minded people will drive me from it.

Whether Ditka is aware that “find another country” is racist is unclear, but there is absolutely nothing in his history that would allow for him to get the benefit of the doubt.

Ditka’s comments share similarities in content and tone with not only Trump but also another elderly ex-coach who likes playing a tough guy on television: disgraced former Indiana University basketball coach Bob “The General” Knight. These braying bullies have appointed themselves as the arbiters of patriotism. Yet when Trump, Ditka, and Knight had the chance to serve in Vietnam, they didn’t. They used whatever means were at their disposal—deferments, foot injuries, coaching Army basketball—to get out of it. Their lives mattered.

I have no problem with anyone who didn’t serve in that horrific war. My great hero is Muhammad Ali, who resisted the draft in Vietnam. But these guys act like they’re George Patton when they’re not even George W. Bush.

It’s galling that, in Ditka’s mind, Trump’s trashing of this country is somehow patriotic, yet Kaepernick’s critiques justify his exile. It is galling that Ditka is blissfully unaware that there are legions of black former players who feel that he didn’t respect their health, their minds, or their humanity. Now his critique of Kaepernick feels like another chapter in a life of degrading black people who do more than just say, “Yes, Coach.”

There has been a call for Mike Ditka to be fired from ESPN for his comments. I don’t agree, partially because there is no more nauseating thought than “First Amendment martyr Mike Ditka.” He shouldn’t be fired, but he should be debated. He should have to spew his views not in the confederate confines of talk radio but to the face of ESPN colleagues Herman Edwards or Charles Woodson or Bomani Jones or Jemele Hill. Make him say that to the face of someone who has had to live while being black in this country, someone unafraid to push back. I suspect that Ditka would respond to this the way bullies always respond when challenged. When bigoted bullies are armed only with their rancid ideas, they never stand their ground.