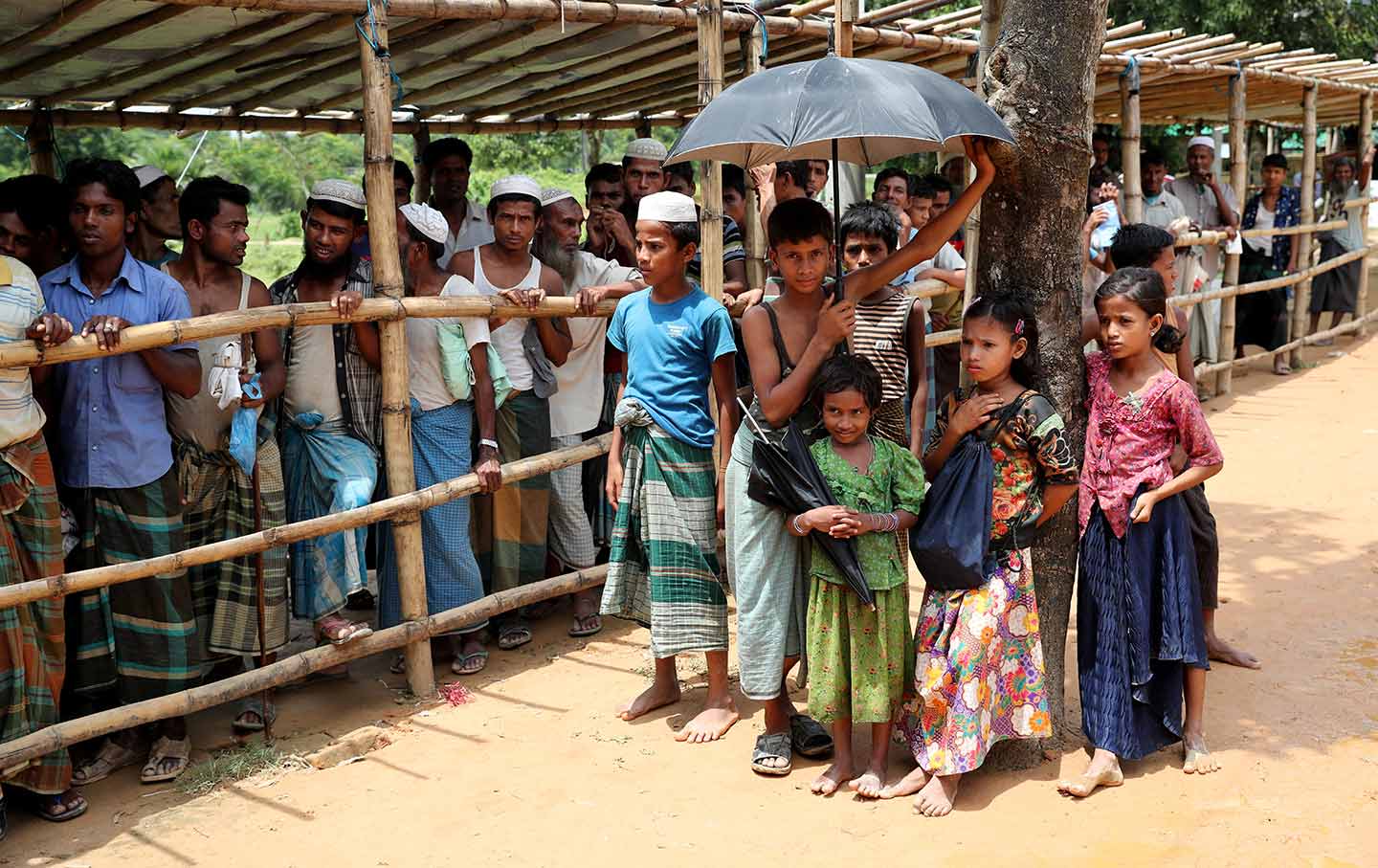 Rohingya refugees stand in a line to collect relief supplies at a camp in Cox’s Bazar, Bangladesh, on July 1, 2018. (Reuters / Mohammad Ponir Hossain)

The report, issued by the three-member Independent International Fact-Finding Mission on Myanmar, also includes the following bombshell allegation, after noting that the “critical element” in determining whether genocide has in fact taken place is whether “genocidal intent” can be established:

The Mission concluded, given these considerations on the inference of genocidal intent, that there is sufficient information to warrant the investigation and prosecution of senior officials in the Tatmadaw chain of command, so that a competent court can determine their liability for genocide in relation to the situation in Rakhine State.

While different NGOs and genocide study organizations came to the same conclusion well before the UN did, until now that body and world leaders have been reluctant to use the term. On August 25, US Secretary of State Michael Pompeo accused Myanmar’s security forces of carrying out “ethnic cleansing.” There is very little doubt that the regime has been practicing ethnic cleansing against the Rohingya, but ethnic cleansing and genocide are not mutually exclusive. Nevertheless, confining the issue to one of ethnic cleansing not only evades the much more serious charge of genocide; in the case of the Rohingya, it does something more. For the Myanmar government has insisted that the Rohingya are in fact not an ethnic group, but rather “illegal immigrants” from Bangladesh.

Militant Buddhist groups such as the Rakhine Nationalities Development Party voice the dominant anti-Rohingya sentiment. One of its leaders, U Shwe Mg, asserts: “the so-called Rohingya are just illegal immigrants. We allowed them to settle down here because we are generous people and we thought they would just stay a while. But the Bengali had a lot of children, paid Buddhist women to convert to Islam and marry them, stole our land, squeezed our resources, and now they demand equal rights and citizenship. It can’t be.” This is patent nonsense—it is an established historical fact that the Rohingya have lived in what is now called Myanmar for centuries. Furthermore, their right to identify as an ethnic group is secured by international human-rights discourse and by the Universal Declaration of Human Rights.

Setting aside the internal politics that have allowed for genocide to take place, we need to ask why it has taken the United States so long to fully register the crisis of the Rohingya, a group that in 2015 The Economist called “the most persecuted people in the world.”

Three answers come to mind, and all three now need to be especially scrutinized and questioned.

First, and perhaps most concretely, Myanmar State Counsellor and Nobel Peace Prize winner Aung San Suu Kyi has offered cover to the actions of her generals for an unconscionable amount of time. When she has spoken, it has been to mouth absurdities. As Hannah Beech wrote in The New Yorker: “[Suu Kyi] has described the Rohingya insurgents as ‘terrorists’ and dismissed the worldwide condemnation, saying that international outlets have created ‘a huge iceberg of misinformation.’ Her office has accused the Rohingya of setting fire to their own homes in order to provoke an outcry.” Now, as more and more of her honorary degrees and titles are being stripped from her, this UN report properly and thoroughly destroys Suu Kyi’s lingering status as a human-rights activist.

Buddhists in Myanmar Are Unifying Behind a Deadly Nationalism

Second, as indicated above, one of the most difficult things to demonstrate whether genocide has occurred is the idea of intent. Speaking at a recent conference on the Rohingya genocide convened at the University of Ottawa, Gregory Stanton, founder and president of Genocide Watch, noted that intent is relatively easy to prove when it comes to individual actions, but for state actions, it is much harder. How can one know what a state’s real intent is? But the UN report, with its mass of data, has established a portrait of a systematic set of practices that betray the state’s intent. Furthermore, an op-ed published on August 25 in The Washington Post by Ashley Kinseth, founder of the Stateless Dignity Project and an experienced international human-rights attorney who spent considerable time in Myanmar, made a powerful case that points to pre-meditation. Now that the term “genocide” has been applied, it means not only that Myanmar is open to prosecution, but also that it is obliged to prevent any further acts of genocide.

Finally, we can attribute much of our willingness to remain blind to the situation in Myanmar to what Edward Said famously labeled “Orientalism.” By that, he meant the way the West constructed a particular set of images, terms, and narratives to produce its version of the “Orient” and its inhabitants. Orientalism is commonly drawn on to legitimize all sorts of political intents. In the case of the Rohingya, we have two forms of Orientalism. First, there is the fact that the Rohingya are Muslim. Both within Myanmar and outside it, the genocide against the Rohingya has escaped worldwide condemnation because we live an age of Islamophobia, and the state of Myanmar has capitalized on that. Second, the ruling clique in Myanmar is Buddhist. And despite the fact that there are videos of Buddhist monks dressed in saffron robes beating and killing innocent Rohingya men, women, and children, the fanciful Western image of Buddhists as passive, serene, and peaceful has bought the regime precious time.

The world community must come out of its stupor. Over 750,000 Rohingya are in what may be the world’s largest refugee camp in Bangladesh (the UN Refugee Agency says the total number in that country is now nearly 900,000), and many of them are children who have either lost their families to the carnage or are themselves the result of rape. The monsoon season is in force, and both physical and mental health issues are exploding. There are fewer and fewer reasons to stand in the way of a long-overdue international effort to protect the long-suffering Rohingya.

At the Ottawa event five proposals emerged for the immediate future: