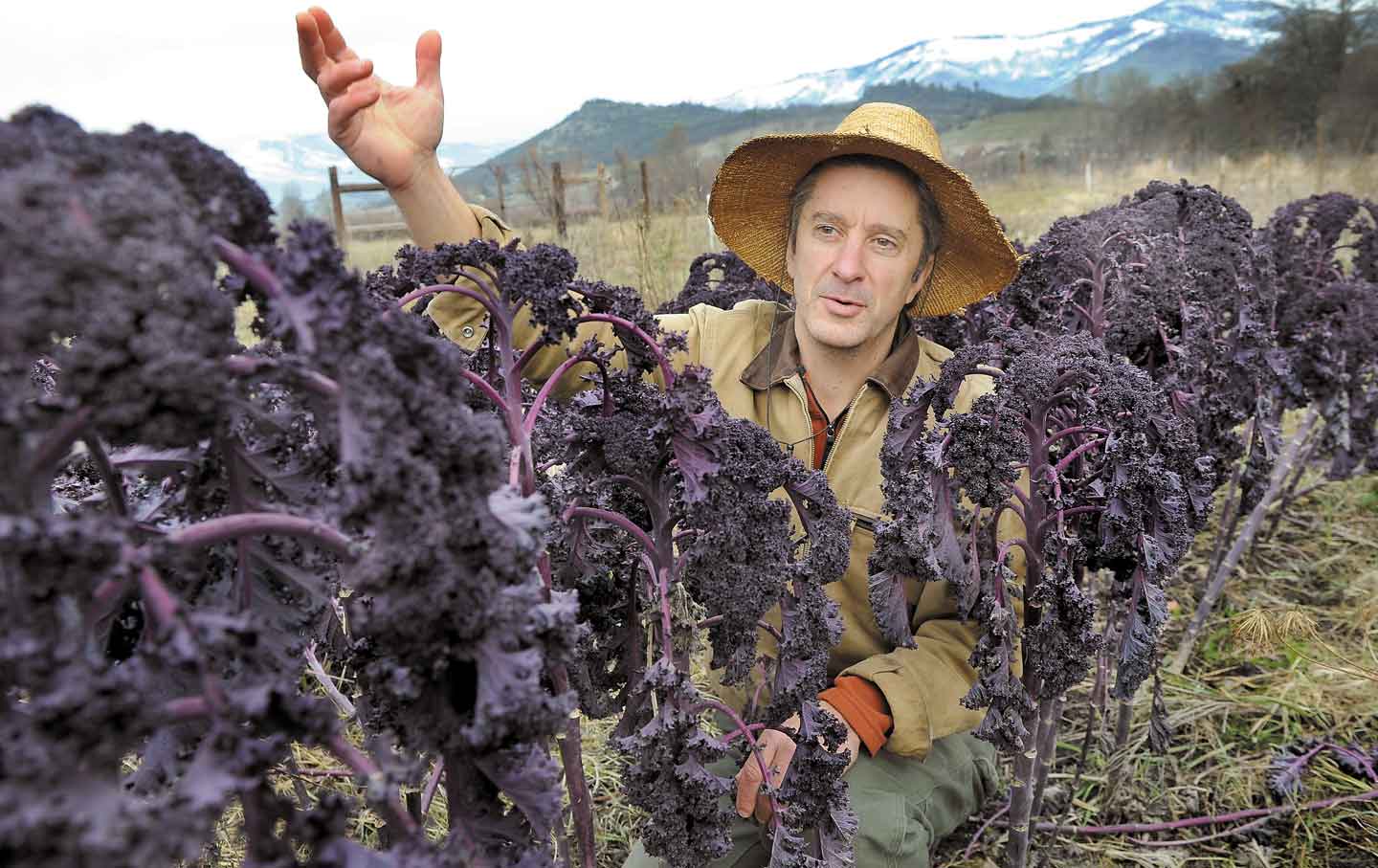 A farmer who grows kale and chard near Ashland, Oregon, says he had to throw away $4,700 in chard seed after learning it may have been contaminated from a nearby GMO field. (AP Photo / Mail Tribune, Bob Pennell)

In March of 2009, the Biotechnology Industry Organization (BIO), the biotech industry’s trade association and lobbying arm, submitted a letter to the Office of the United States Trade Representative (USTR), which was in the early stages of negotiating the Trans-Pacific Partnership.

The letter came in response to USTR’s invitation for public comment to help develop negotiation objectives for the proposed trade deal, which at the time involved seven other Pacific Rim nations. The USTR broadly outlined the areas that it was interested in input on—the economic costs and benefits to the removal of tariffs, environmental and labor issues that should be addressed, trade-related intellectual property rights that should be considered—and BIO jumped at the chance to respond. “BIO will focus its comments on issues relating to (i) agricultural biotechnology and (ii) matters concerning intellectual property rights,” the six-page letter read. “BIO appreciates this opportunity to comment on the proposed TPP FTA, and we look forward to working closely with USTR as this initiative proceeds.”

And work closely they did. While the terms of the TPP were kept secret from the public and policymakers during negotiations, USTR negotiators relied heavily on input from the corporate insiders who populate the US government–appointed Industry Trade Advisory Committees (ITACs). A representative from BIO sits on ITAC-15, the committee that focuses on intellectual property (IP) rights, and BIO spent roughly $8 million on lobbying each year while the TPP was under negotiation, paying firms like Akin Gump Strauss Hauer & Feld $80,000 annually to lobby for “patent provision in the Trans-Pacific Partnership trade negotiations.”

The results of this lobbying blitz were unknown until the final text of the agreement was released in November of last year. Signed on February 4 and awaiting ratification by its 12 member countries—Australia, Canada, Japan, Malaysia, Mexico, Peru, United States, Vietnam, Chile, Brunei, Singapore, and New Zealand—the TPP is the largest regional free-trade deal in the world. While many have scrutinized its potential for offshoring jobs, lowering wages, and raising drug prices, few have paid attention to the TPP’s impact on the sector BIO prioritized above any other: agricultural biotechnology. Experts have called the TPP a “big win” for the biotech seed industry, and many warn that the trade deal will further enrich seed companies at the expense of farmers’ rights.

Agricultural biotechnology refers to a range of tools used to alter living organisms, including the tools of genetic modification. According to the Food and Agriculture Organization of the United Nations, the major product of these tools, which are commonly known as genetically modified organisms (GMOs), are produced through techniques that alter the genetic material “in a way that does not occur naturally by mating and/or natural recombination.”

Since the 1980s the United States has allowed genetically modified organisms to be patented. Because of the economies of scale at work in the research and development of seed varieties, most patent holders are corporations that can invest millions into experimenting with genomic characteristics. Patents offer holders exclusive rights over the production, selling, and usage of patented GMOs—crops like herbicide-resistant soybeans and drought-tolerant corn. Rewarding large agricultural companies with exclusive ownership rights has fueled consolidation of the seed industry, and today three firms—Monsanto, DowDuPont, and Syngenta—control the majority of the world’s GMO seed market, with greater consolidation afoot.

These firms and other GMO patent holders sell their seeds to farmers along with a legal agreement that they will not save and replant seeds produced from the seeds bought from the company. Farmers found in violation of these agreements are subject to lawsuits from the patent’s owner, even if this violation is accidental. While the United States is the top grower of GMO crops, since 1995 the federal government has negotiated intellectual-property and trade treaties that have allowed seed companies to expand their business into foreign markets by exporting our IP laws. The TPP will further extend their reach.

While the United States and Japan did not succeed with their proposal of including patent protections for GMO plants—the provision, based on the US patent model, was removed in response to resistance from the majority of member countries—the TPP requires that member countries make patents available for “inventions that are derived from plants.” According to Burcu Kilic, a legal and policy director at the advocacy group Public Citizen who has written extensively on the TPP, the provision will likely translate to patents on genes that, once inserted into plants, render the plant patent-protected. So, for example, one could not patent an herbicide-resistant soybean, but one could patent the gene that makes a soybean herbicide resistant. The patent holder would then have the exclusive rights to the manufacture, sale, and use of any organism that contains that gene. In other words, the final language in the TPP became more palatable to skeptics whose approval of the agreement was needed, but patents on “inventions derived from plants” will likely be indistinguishable in practice.

“It’s ambiguous,” acknowledges Kilic with respect to how the language differs from the originally proposed patents on plants. “And when it is ambiguous, it’s scary, because the implementation will shape everything.” Currently, only three of the TPP member countries make patents available for plants, so if experts are right about the implications of this provision, nine other countries could see the introduction of US-style patents on plants.

The TPP also requires all member countries to join the Budapest Treaty on the International Recognition of the Deposit of Microorganisms for the Purposes of Patent Procedure, which Public Citizen says will “make it procedurally easier to apply for a patent.” Each member country must join the International Convention for the Protection of New Varieties of Plants 1991 as well, which effectively outlaws the saving of seeds from one season to the next, a practice the majority of the world’s farmers rely upon. “Farmers are prohibited from saving, replanting, and exchanging protected seed, and breeders are granted exclusive right to germplasm,” Maywa Montenegro, a PhD candidate at UC Berkeley researching seed systems, says of the treaty. While farmers in some TPP member countries technically have this right enshrined in the International Treaty on Plant Genetic Resources for Food and Agriculture, the conflict between these agreements coexists without resolution.

Proponents of strict IP rights for GMOs say patent protections spur innovation that could help developing countries. However, according to a study published by the Canadian Journal of Sociology, the majority of genetically modified crops are herbicide and insect-resistant versions of maize, canola, cotton, and soybeans. “If the needs of developing countries were considered, one would see traits such as plant hardiness, drought resistance, or salinity tolerant crops for food insecure regions, rather than the same crops and traits evident in developed countries,” the study concluded. While some socially useful GMOs “are announced with much public fanfare—vitamin A infused ‘golden rice’ to combat blindness in poor countries, for example—to date such innovations have either failed to reach commercialization or remain statistically negligible.”

Indeed, a study published by Third World Quarterly found that, in the world’s least developed regions, IP rights not only fail to spur innovation, they’re actually an impediment to it. As the UN’s Special Rapporteur on the Right to Food Olivier De Schutter explained in 2009, “Intellectual property rights reward and encourage standardization and homogeneity, when what should be rewarded is agrobiodiversity.” With the narrowing of crop varieties come threats to biodiversity, a key element for climate-change adaptation.

Maywa Montenegro agrees that the TPP is a danger to biodiversity. By exporting intellectual-property laws first developed in the context of the United States to countries with vastly different domestic populations and environments, she says the TPP threatens to homogenize farming across the Pacific Rim to the particular detriment of marginalized populations, not only small farmers and indigenous people who can’t save the seeds but also entire populations who lose access to their traditional foods as GMOs seeds contaminate or crowd out native plant varieties. The spread of GMOs also carries the potential to inflict damage on fragile ecosystems by contaminating indigenous crops through cross-pollination and displacing genetically diverse native varieties with monocultures. “It’s the antithesis of sustainable agriculture,” says Montenegro.

In response to these threats and uncertainties over health risks posed by GMOs, dozens of countries have passed legislation to restrict or ban GMO crops altogether. GMO corn is currently banned in Mexico, for example, to protect the diversity of the country’s most important crop. Seed companies frame these initiatives as “unduly restrictive of trade,” as BIO’s letter to the USTR put it, and the TPP may make it easier for seed companies to challenge GMO bans on trade grounds. Montenegro expects this will force open previously inaccessible markets for GMOs, “imperiling sovereignty over seeds, ecosystems, and knowledge rights.”

In a report sent to the USTR on December 3, 2015, less than a month after the TPP was released to the public, the industry trade committee focused on IP rights noted that the agreement “requires TPP Parties to make effective patent protection available for plant innovations,” concluding, “ITAC-15 believes the objective of comprehensive patent protection for plant-related technology has been advanced by the TPP Agreement.” Unfortunately, it seems they are right.