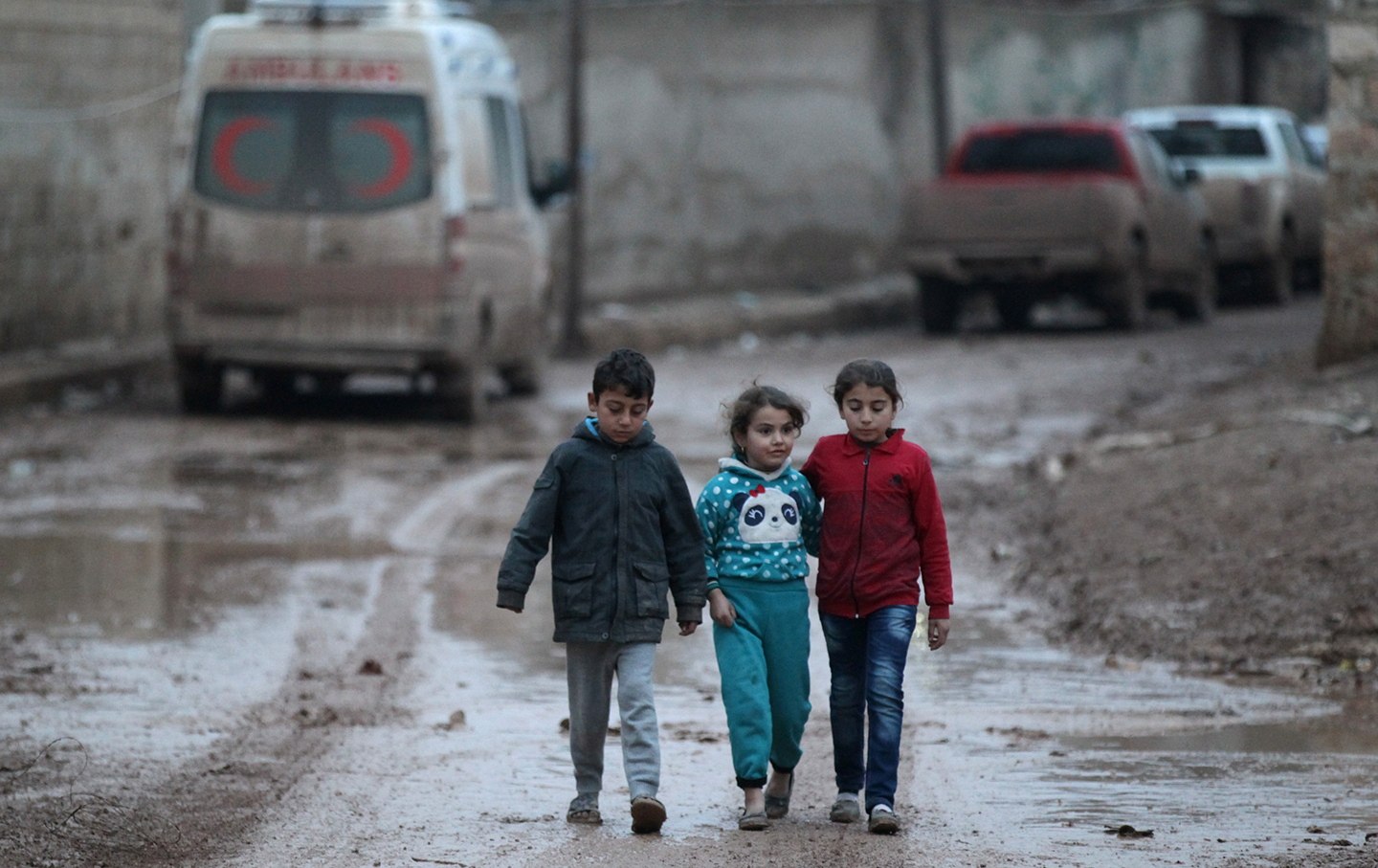 It should come as no surprise that if you hear bombs and bullets around the clock, you’ll have trouble sleeping at night. It doesn’t seem to keep the president up at night, though.

With Trump proposing cuts to agencies and programs that would be integral to deescalating the Syrian conflict—from humanitarian aid to diplomatic efforts—it’s clear that Washington remains unmoved by the nightmare that has gripped the lives of a whole generation of Syria’s children. A new study by Save the Children, based on more than 450 interviews with adults and children across the country, reveals that six years of war have left a generation with massive invisible scars, as humanitarian aid efforts dwindle.

Following the war’s deadliest year for children so far, the attention of international aid authorities has focused primarily on delivering immediate relief. But “toxic stress” is wreaking untold havoc on children from the inside as well, according to researchers: “ongoing bombing and shelling is the number one cause of psychological stress in children’s daily lives.” About half of children “say they never or rarely feel safe at school and 40 percent say they don’t feel safe to play outside, even right outside their own home…. 78 percent of children feel grief and extreme sadness some or all of the time.”

“We notice that they are always stressed and react to any unfamiliar noise, if a chair moves or the door bangs, because of their fear of the sound of airplanes and rockets,” states Mohammed, an aid worker with Save the Children’s partner organization Shafak in Idlib. “Children are increasingly isolated and don’t like to participate in our activities, and in the young children we’re seeing a lot of cases of involuntary urination.”

According to Alexandra Chen, a child-protection and mental-health specialist at Harvard University who has studied the report, the findings reveal that child refugees, regardless of whether they’re in an active conflict zone, are not out of crisis but, rather, face unique threats: “The refugees are not necessarily in a relatively safe spot at all. Being a refugee for these children often means involvement in sexual trafficking or human trafficking so, there are different kinds of dangers.”

Experts fear that children displaced inside and outside the country are being tracked into a lifetime of emotional volatility that, without proper intervention, will lead to violent adulthoods. Appropriate mental-health services are desperately scarce at the refugee camps, and many children display destructive coping strategies through aggression as well as emotional despair.

After witnessing his father’s death in 2012 by a sniper’s bullet, 8-year-old Mohammed spoke of unending horror since escaping to a refugee camp on the Turkish-Syrian border: “I get upset when I am playing and someone comes and upsets me…. When I get upset, my heart feels like it is falling down…. I have scary dreams. When I am asleep, a monster comes and starts asking me: ‘Why are you asleep? Wake up and don’t sleep—you will not benefit from sleeping.’”

He has reportedly begun to display volatile, sadistic behavior, and habitually stutters and soils himself uncontrollably. His mother recalled seeing him beat his brother and other children; he recently threw his neighbor’s cat off the roof.

“He became very aggressive, beating this one, hitting that one…. He beats his friends a lot,” she told researchers. “Everyone complains about him. When he plays with them, he is OK until he gets upset, but once he’s upset he’ll hit them with whatever in his hand, a stick or whatever. He doesn’t care.”

Seven year-old Razan experienced similar trauma when her father was killed by a sniper when she was a toddler. Afterward, she grew “terrified of blood, and panicked when she saw people crying,” according to researchers. The death of her mother and sister left her in the care of her older sister, with whom she began acting aggressively, screaming and wetting herself constantly and displaying “trouble differentiating between fact and fiction.”

Her 20-year-old sister, meanwhile, struggles to cope as she sees her sister regressing: “I feel that instead of growing up, she is becoming younger. She forgot everything she learnt, she has nothing anymore.”

With Trump planning to severely slash State Department funding, a major source of international assistance, and ban refugee admissions from Syria and other Muslim-majority countries, humanitarian funding could soon plummet, while key escape routes for the displaced are sealed. Trump cites national-security concerns, but the crisis facing refugee children underscores how his ban on refugees fails to recognize the real threats haunting Syria’s children. Trauma in childhood results in both physical health impacts and long-term multigenerational trauma, including “drug and alcohol abuse, depression, suicide, domestic abuse and extremism.”

Even assuming the war will eventually conclude, researchers estimate the cumulative damage of this trauma on children will lead to long-term consequences for the region’s socioeconomic recovery, with disruption of basic education costing the country an estimated $11 billion.

There is also severe unmet need for services that are tailored to fit families’ cultural and religious dynamics. Refugee girls, for example, have special concerns, because families often sell girls into marriage, thinking it might keep them safe from rape. A recent study on refugee conditions in Jordan found that underaged girls were the brides in roughly one-fourth of refugee marriages.

Save the Children’s report calls on aid agencies and governments to ensure that, despite potential funding cuts in the upcoming State Department budget, mental health must be prioritized in the relief and recovery process. The foremost challenge is to end the siege of Syrian combat zones that has continually blocked relief workers from supply routes in combat zones. But in the coming years, international and domestic social agencies must build robust mental-health systems into the country’s social infrastructure, not just in health-care institutions but also with schools, and within homes, so that parents can support their traumatized children.

“Mental health is often seen as a luxury and not often a priority in humanitarian settings,” Harvard’s Chen says. “Food security and shelter will come first, and that makes sense, but that means that when we don’t have adequate funding, mental-health support becomes one of the first things that get cut—not least in part because it’s often…expensive.”

But the cost of ignoring children’s plight is immeasurable, and Razan explained how impossible it is to put a price on what children like her need: “I would like it if no one fought with me or shouted at me. I like to be alone, to be able to go out and no one kidnaps me. And for there to be no fighters or anything, and no bombing.”