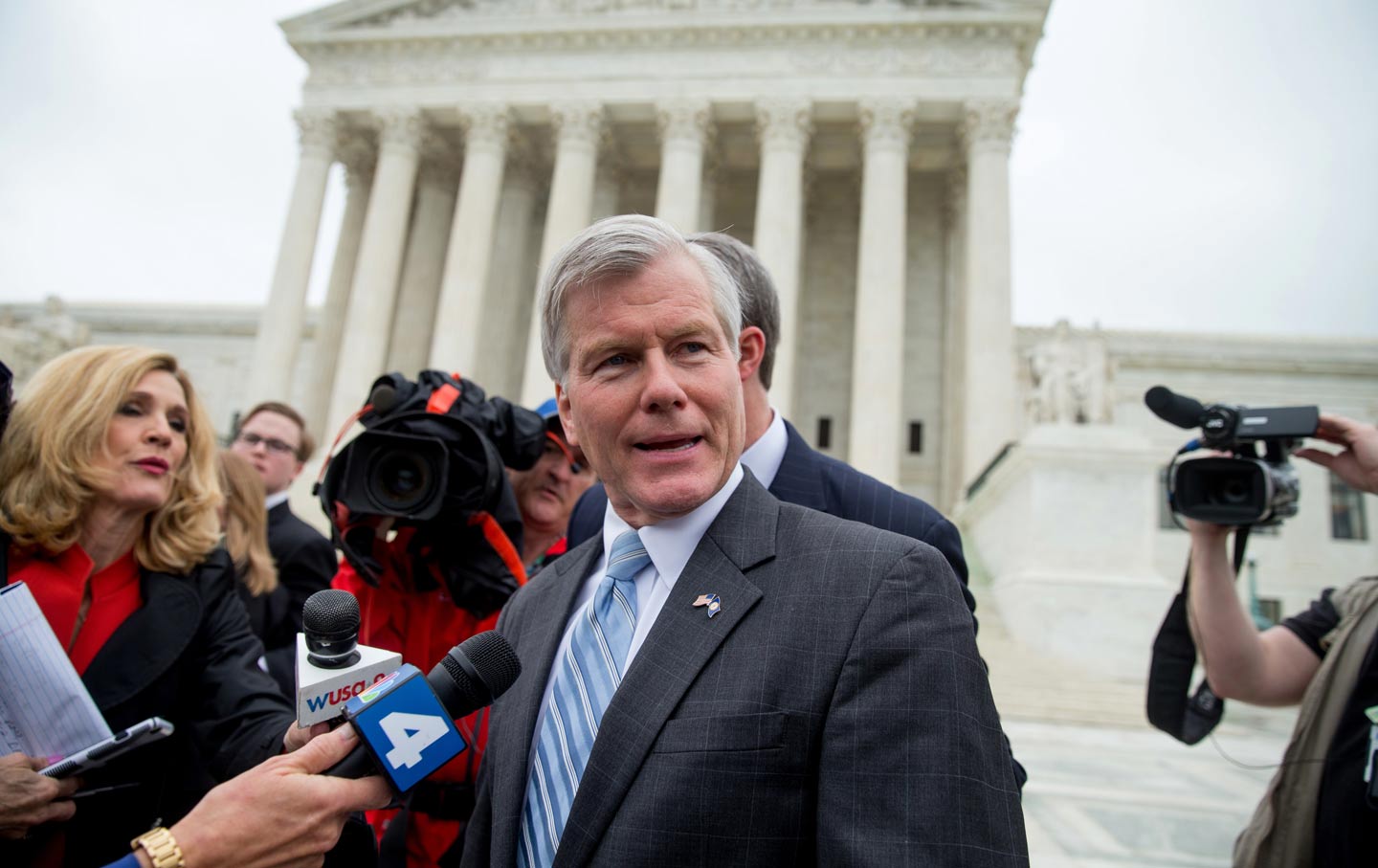 The same Supreme Court that unleashed a torrent of political corruption with its Citizens United ruling of 2010 has now expanded its support for legalized bribery with a unanimous decision to vacate former Virginia governor Robert McDonnell’s conviction for corruption.

Written by the Court’s most ardent advocate for the corporations-are-people, money-is-speech fantasy that is remaking American politics and governance—Chief Justice John Roberts—Monday’s decision in McDonnell v. United States places another link in the chain of protection for influence peddling that Roberts and his colleagues have been forging.

“Governor Robert McDonnell accepted nearly $200,000 in cash and luxury goods, including a Rolex watch and flights in a private jet, in exchange for using the Governor’s office to help a business. The Supreme Court today held that although the Governor and his aides took action—with state resources—on behalf of the business, those actions do not go far enough to constitute ‘official actions’ without prosecutors proving still more, creating an additional hurdle before corrupt conduct is considered illegal,” explains Noah Bookbinder, the executive director of Citizens for Responsibility and Ethics in Washington (CREW). “This narrow reading of the law will seriously impede law enforcement’s efforts to clamp down on corruption. The Supreme Court essentially just told elected officials that they are free to sell access to their office to the highest bidder. If you want the government to listen to you, you had better be prepared to pay up.”

"This ruling opens the way for corporate executives and wealthy individuals to undermine our democracy..."

“We’re very disappointed that the court took such a narrow view of what amounts to bribery under the law,” says Scott Nelson, an attorney who did the legal work on an exceptionally strong amicus brief that was filed in regard to the McDonnell case by Public Citizen and Democracy 21. “This ruling opens the way for corporate executives and wealthy individuals to undermine our democracy by buying influence at the state level.”

While Nelson says he is “pleased that the court didn’t accept the constitutional arguments made by McDonnell that the First Amendment protects quid pro quo payoffs made to government officials to influence government policy,” he and other serious observers understand that will come as little comfort for citizens who lack the resources to buy elections or to buy access to public officials.

The legalized-bribery argument advanced by Roberts seeks to suggest that former Governor McDonnell was engaged in some sort of constituent service—or, in legal parlance, “honest service”—when he accepted lavish “gifts” from a businessman and then used his position to arrange meetings and to provide access to other officials whose actions could benefit the businessman. Roberts acknowledged that McDonnell’s actions were “distasteful.” But the chief justice still suggested that it was acceptable for a businessman to effectively buy the lobbying services of powerful officials with expensive gratuities—so long as the officials serve as facilitators rather than formal decision makers.

But, of course, that facilitation can be of enormous service to those who are wealthy enough to engage the services of a governor.

"This ruling opens the door to a 'pay to play' culture in government." -- Democracy 21 President Fred Wertheimer

“The facts in this case were not about a public official’s normal ‘responsiveness’ to a constituent. They were about a brazen and successful attempt to buy an official’s endorsement of and support for a product and that official’s assistance in promoting that product within the government,” says Wertheimer, who explains: “This ruling opens the door to a ‘pay to play’ culture in government, so long as the gift-receiving official does not make a government decision or take an official government action. In essence, the Supreme Court has said it is perfectly legal for an officeholder to sell certain types of actions taken by the officeholder in return for large amounts of money going into the officeholder’s pocket.”

This is an accurate assessment of an atrocious decision by a Court that has already done severe harm to democracy.

The McDonnell ruling cannot be allowed to stand. Yet it will not be easy to overturn. Of course, prosecutors should continue to go after corrupt politicians, and lower courts should continue to take cases that might lead to a reversal—or at least a clarification—of Monday’s wrongheaded ruling. Legislators can and should take steps to specifically define official wrongdoing in a way that signals it is unacceptable for officials to accept expensive gifts and then arrange meetings for their benefactors. And future presidents should appoint justices who recognize the need to address the culture of corruption that has infected our politics and governance.