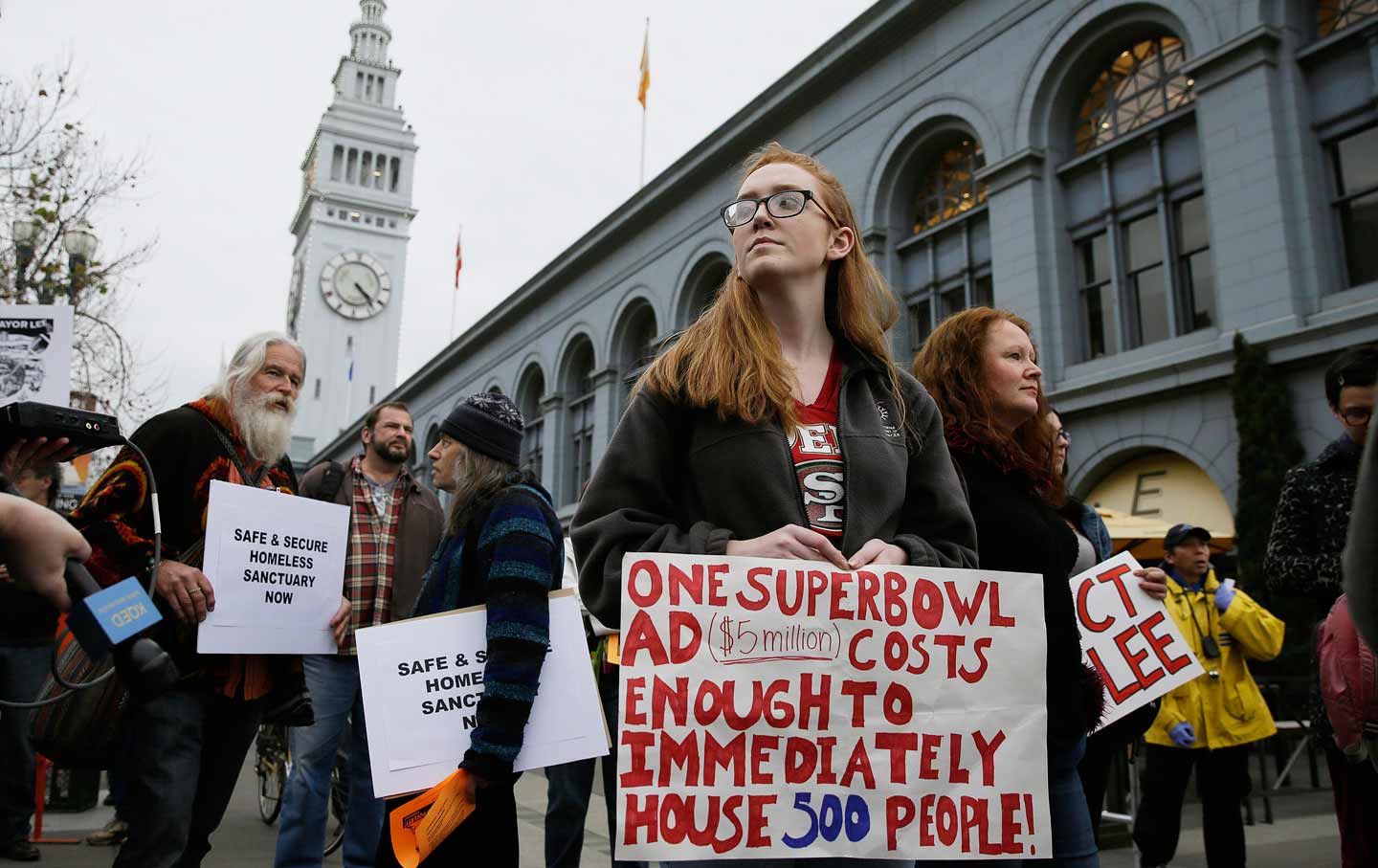 On a daily basis, an estimated 2,000 pounds of “trash, human waste and hypodermic needles” are removed from the homeless encampments around San Francisco. These are the tent cities that form the backdrop to the monstrous spectacle of decadence that is Super Bowl week in the Bay Area.

Last August, San Francisco’s Mayor Ed Lee made clear that a cleansing of the homeless would take place before the Super Bowl, saying, “They are going to have to leave. We’ll give you an alternative, we are always going to be supportive, but you are going to have to leave the streets.” Currently, there is no evidence of widespread mass-sweeps. But according to several Bay Area homeless rights activists and social workers with whom I spoke, it seems that when the cameras are on, the city cleans up trash. When the cameras are off, the city cleans up people, whom the San Francisco Police Department treat as if they are equally disposable.

As private planes engage in the yearly Super Bowl ritual of fighting for space at area airports, they will be entering a city that serves as a macrocosm of both the excesses of the big game and the human cost to be paid by many of the players we will be cheering on the field. While the city is having another of its periodic real-estate booms, creating the most expensive housing market in the nation—with a minuscule one-bedroom apartments going for $3,500 a month—the number of homeless in San Francisco is staggering. In a city with an official population of about 800,000, there are from 7,000 to 10,000 homeless. As Jessica Hanson Weaver, a social worker who works in the largest of the San Francisco homeless shelters, said to me, “That number goes up and down depending on variety of factors. It includes youth, families, and adults in shelters, and also those in streets, living in parks, or in the care of hospitals.”

It is certainly true that one cannot blame the current mission-creep subtle-sweep of the homeless solely on the Super Bowl. That’s because for Mayor Ed Lee the crackdown on the homeless is not a Super Bowl phenomenon but a year-round game. In 2015, the police of San Francisco handed out roughly 2,300 citations a month to homeless people. That’s 77 every day. These citations lead to arrest, which leads to warehousing people behind bars instead of confronting the near total absence of affordable housing. The greatest sin in all of this is that 61 percent of the homeless lost their homes while still employed. There is just nowhere to live.

As Hanson Weaver said to me, “Over the past five years we have seen a sixfold increase in citations against homeless people. This is because areas where homeless have traditionally found shelter—Tenderloin, Civic Center, South of Market—are in the center of a new massive development of the ‘MidMarket’ area that surrounds Twitter headquarters.”

This housing and human crisis has led to a series of protests over the past week against the estimated $5 million in public spending on Super Bowl infrastructure, a deal that analysts are saying is lousy for the city. Five million dollars could have meant 500 units of new housing. Instead, it has gone primarily toward to building “Super Bowl City,” an NFL street fair for the locals who can’t afford tickets to the game. It’s a street fair branded with corporate logos and monitored, as journalist Davey D told us, by police in full body armor and rooftop snipers, turning public sidewalks into the property of the National Football League and their sponsors.

Yet while Twitter HQ has become a symbol for the gentrification and skyrocketing costs in the city, the social media platform has also become an organizing tool for resistance. On Wednesday, hundreds took to the streets in a protest under the banner #tacklehomelessness. The protests are aimed at challenging the priorities of SF leaders. These protests provide the only vestiges of hope for this remarkable urban area that has become more than “a tale of two cities.” It’s a tale of two worlds.

I spoke with activist Nato Green, who describes himself as “the country’s only semi-functional hybrid of comedian and union organizer.”

His comments deserve reading and rereading: “The Super Bowl is the literal, physical manifestation of Mayor Lee’s term. San Francisco has become uninhabitable for anyone but rich people and tourists. At the same time that the mayor is stonewalling investigations into racist police violence and political corruption in his administration, huge swaths of public space are inaccessible to residents for private parties. He put the city on the hook for millions of dollars based on an insider handshake agreement with the representative of the Super Bowl Committee, who happened to be the spokesman for the previous mayor. His policies created a crisis of eviction and displacement, and now police are rounding up and flooding the homeless encampments they caused so Super Bowl 50 VIPs don’t have to see it. Mayor Lee is trying to make San Francisco into a managed simulacrum of a city, like Disneyland’s Main Street with animatronic urbanism, and police are there to evict the remaining real residents who get in the way. We’re not going to make it easy for him.”

If there is one positive about the debt, displacement, and militarization that the Super Bowl has amplified in San Francisco, it is that it has shined a piercing light on the problems that plague the area. In the light of day, the priorities of this “managed simulacrum of a city” have never been more exposed.