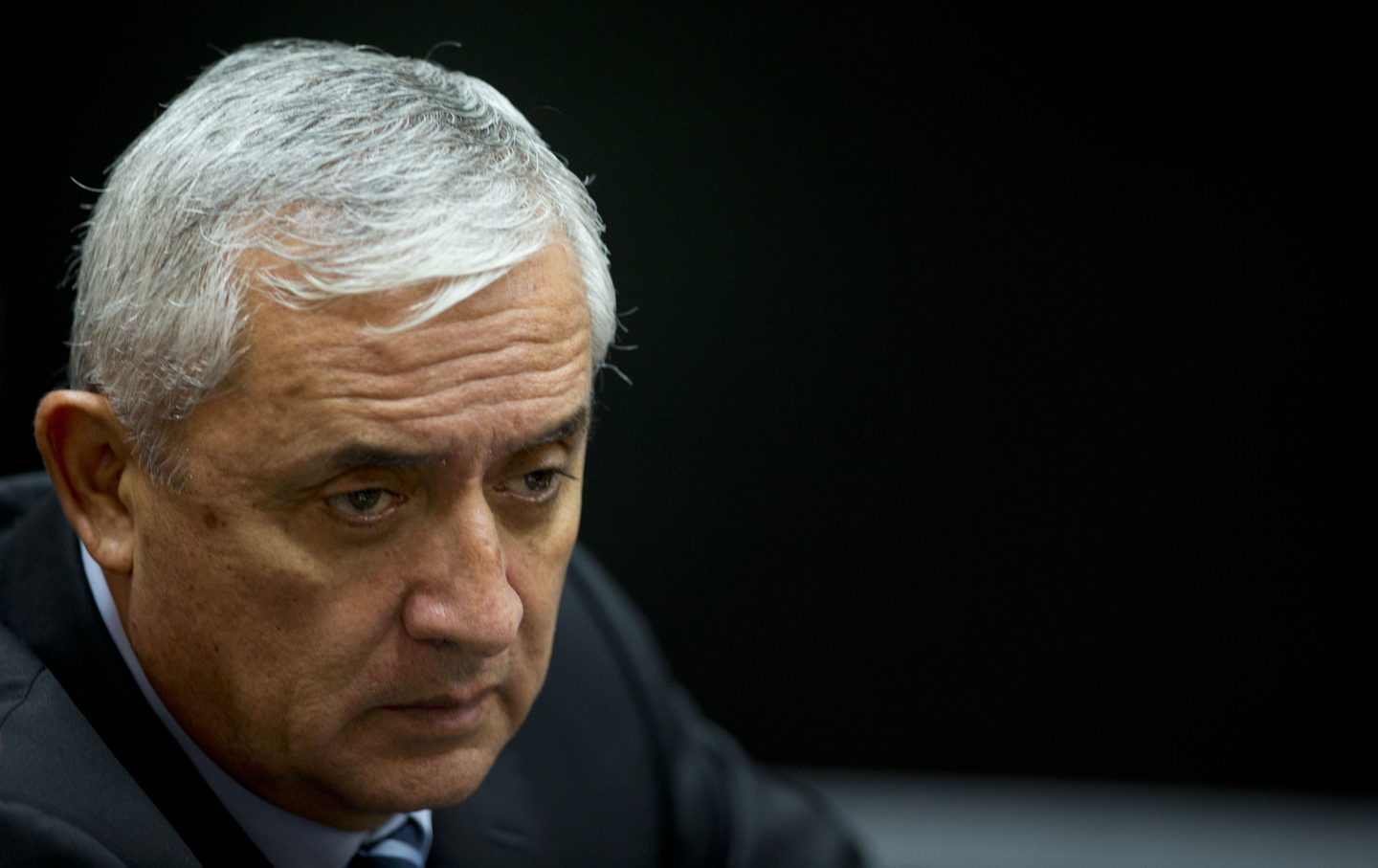 On the first day of September, Guatemala’s Congress voted to end President Otto Pérez Molina’s immunity from prosecution. Crowds gathered outside Congress, setting off fireworks and celebrating the decision. The vote followed months of mass mobilizations against corruption and popular calls for Pérez Molina’s resignation.

The following day, the ousted president was in jail.

Pérez Molina’s resignation is a watershed moment for Guatemala. It’s a striking blow to the wall of impunity that surrounds the country’s most powerful figures—and in this case, one of its most feared as well. Carrying out research in Guatemala several years ago on the human rights violations of the early 1980s, I got a sense of Pérez Molina’s pervasive power from the cloud of fear that materialized whenever his name was mentioned.

Indeed, Pérez Molina may be on trial for corruption now, but he’s been directly linked to far more serious crimes—including numerous human rights atrocities and political murders committed during and after Guatemala’s internal armed conflict.

In declassified documents, US military intelligence officials wrote that Pérez Molina and his cohort of military officers had “blood stains on their hands” dating back to their actions in the civil war. During the conflict, the country’s US-backed intelligence agencies and security forces were responsible for acts of torture, executions, enforced disappearances, and a military counterinsurgency campaign that involved genocidal massacres of the indigenous Maya population, according to a UN truth commission.

Rewarded by the oligarchy for their dirty war against the guerrilla insurgency and targeted destruction of the left, many members of the country’s powerful intelligence agents and military personnel capitalized on their near-total impunity to form criminal networks during and after the fighting. These enterprises have continued to operate parallel to state institutions, amassing political influence through their connections within and outside of government.

These shadowy “hidden powers,” as they came to be known—illegal, clandestine security structures that originated during the internal armed conflict—have operated parallel to every presidential administration since the military handed over the government to civilian control in 1986. Pérez Molina’s fall is an unprecedented blow against this culture of impunity, but doesn’t yet herald a definite end to the criminal networks.

Pérez Molina’s rise through the army ranks started where most powerful Latin American military generals begin their careers: the US Army’s School of the Americas (now called the Western Hemisphere Institute for Security) in Fort Benning, Georgia—an institution known for training repressive security forces across the hemisphere.

After his early US training, Pérez Molina went on to teach at the Kaibiles school—a training ground for Guatemalan special forces soldiers who also received US counterinsurgency training. They became notorious for their use of torture and brutal killing tactics. He also served in the Guatemalan highlands during the military’s 1981-82 “scorched earth” campaign. He appears in operational military files, by his army nom de guerre Tito Arias, as part of a special airborne troop unit that led the counterinsurgency sweep in July and August 1982, during the height of the violence.

As Pérez Molina’s military career advanced, so did his influence in the proliferating web of shadow powers and criminal enterprises. US Defense Intelligence Agency files from 1991 identify him as an “operator” of a tight-knit loyalty network of military officials that came to be known as El Sindicato. That network facilitated schemes like the La Linea customs fraud racket that Pérez Molina is now facing charges for.

Meanwhile, he consolidated his political influence, taking over as Guatemala’s director of military intelligence in 1992. The following year, he helped to oust President Jorge Serrano, securing for himself a position as chief of the presidential staff, or EMP—which he used to curry influence with a range of military figures.

The position put him at a critical hub of Guatemala’s official structures and criminal parallel powers. Pérez Molina’s predecessor at the EMP, Coronel Luis Francisco Ortega Menaldo, was one of the founders of another military criminal network, the Cofradia. In this role, Pérez Molina appointed his classmates to high-level posts, such as General Roberto Letona Hora, another prominent Sindicato member implicated in a contraband ring known as the Moreno network.

A 1995 US intelligence cable explains how Pérez Molina “amassed power” through his career in the EMP and “developed a strong network of supporters” at all levels of the Guatemalan military. When Pérez needed information or support, they were “only a phone call away.” The document ended with a warning and prediction that he “may be able to continue to manipulate the political spectrum and continue to advance.”

The prediction proved prescient: Positioning himself as a reformer, Pérez represented the military in the negotiations that led to the 1996 peace accords that finally ended the civil war. In 2001, he founded the right-wing Patriotic Party, and two years later he was elected to Congress.

His first presidential bid came in 2007, when he campaigned under the slogan “Firm hand, head, and heart,” advocating a hardline approach to crime in the country. Pérez Molina lost that election by a narrow margin to Álvaro Colóm, but ran again four years later on the same platform. His second bid came at a time when Washington was ratcheting up its drug war assistance in Central America, including support for security forces to fight organized crime and disrupt criminal networks.

That year, human rights groups presented a formal allegation letter to the UN Special Rapporteur on Human Rights accusing Pérez Molina of direct involvement in the use of torture and acts of genocide during the civil conflict. Nonetheless, he was elected in November 2011 with 54 percent of the vote, becoming the first military man to assume the presidency since civil authority was restored in 1986.

During the campaign, according to declassified US State Department briefing papers, Pérez Molina’s party opposed and criticized then-Attorney General Claudia Paz y Paz, whom US officials considered “a committed partner in the fight against narcotrafficking and corruption.” Paz y Paz’s efforts to advance investigations and prosecutions of perpetrators of past human rights violations, combined with her work against drug trafficking and corruption, represented a clear threat to Pérez Molina and his political party.

She would also go on to advance high-level human rights cases, such as the prosecution of former head of state Efrain Ríos Montt on genocide charges.

Pressure against Paz y Paz came to a head during the Ríos Montt trial, particularly after testimony from the proceedings implicated Pérez Molina in military massacres carried out under the former dictator’s watch. Threats against judges, lawyers, and human rights defenders working on transitional justice cases increased dramatically while the administration made numerous statements dismissing the substantial evidence that the government committed genocide during the internal conflict.

In February 2014, Guatemala’s Constitutional Court cut short Paz y Paz’s term, jeopardizing the ongoing human rights prosecutions. Domestic and international organizations alike criticized the ruling, noting that it posed a threat to the independence of the attorney general’s office and suggesting that the pressure was retaliation for her reform efforts. Paz y Paz, along with several investigators who worked with her to prosecute past human rights violations by former military and police officials, subsequently fled the country out of fear of reprisals.

Caught in the Net

But Pérez Molina had a harder time rolling back his other inquisitors—and new US economic and political interests in the region.

His fall can be attributed, at least in part, to the International Commission Against Impunity in Guatemala, or CICIG, an organization set up by the United Nations in 2007. CICIG’s mandate includes investigating and helping dismantle armed criminal networks with links to state institutions, including those that emerged among former military intelligence officials after the civil conflict.

In April 2015, CICIG announced it had uncovered a major customs tax fraud scheme called La Linea, in which officials arranged for “discounts” on customs duties and embezzled the proceeds. CICIG’s initial findings led to the arrest of 22 individuals—including officials from Pérez Molina’s inner circle. In short order, the chain of corruption reached all the way to his vice president, Roxana Baldetti, who was subsequently forced to step down.

The revelations came just a week before Pérez Molina was set to announce whether he would extend the mandate of CICIG for an additional two years. Earlier in the year, he’d made statements declaring that the country no longer needed the UN commission. The widespread domestic and international attention to the corruption scandal, however, forced Pérez Molina’s hand. He reluctantly agreed to extend the commission’s mandate for another two years.

As the scandal escalated, Washington reportedly urged Pérez Molina to purge his cabinet, including getting Baldetti to resign. After Baldetti stepped down, the United States applauded Pérez Molina for the measures, and noted that rooting out corruption is central to the Alliance for Prosperity—Washington’s $1 billion security and development plan for Guatemala, Honduras, and El Salvador.

Civil society organizations warn that the initiative will boost foreign-investor-led “development” policies synonymous with dispossession and forced displacement, further militarize security policies, and exacerbate conditions of poverty and violence in the region. But for Washington, supporting CICIG and high-profile anti-corruption cases falls into a broader policy objective to secure domestic and international buy-in for the plan.

Human rights defenders have documented the evolution of military criminal structures in Guatemala for years. Journalists such as José Rubén Zamora, who publishes the newspaper El Periodico and has reported extensively on organized crime, have emphasized that every president of Guatemala has governed with the existence of parallel powers.

The La Linea scheme that brought down Pérez Molina was just one of these. Other military criminal networks—like La Cofradía, Grupo Salvavidas, and La Red Moreno—also stem from the counter-guerrilla operations, when military intelligence took control of customs points to check for weapons entering the country destined for guerrilla groups. With control of customs, they then controlled the flow of goods and services, and developed strong links to narcotics trafficking and other illicit activity. These criminal networks became deeply entrenched, and while the groups may have evolved and changed form, there’s no guarantee the fall of Pérez Molina will lead to their eradication.

Without serious institutional reforms, criminal networks with ties to the military will likely continue to hold sway over government affairs. Indeed, many of the activists who helped bring down Pérez Molina boycotted the September 6 general elections amid calls for the polls to be postponed in the wake of the president’s resignation just days earlier. Guatemalans wore black clothes of mourning to signify the country’s dead institutions, and banners were hung across the National Palace in Guatemala City calling the elections illegitimate.

The general elections went forward anyway, with Jimmy Morales—an actor and comedian with no political experience—coming out as the frontrunner after the first round of voting. Morales’ National Convergence party was founded by members of the powerful military veteran association AVEMILGUA—an influential group created by ex-military personnel that promotes impunity for past and contemporary military abuses. Morales is also closely linkedwith the well-known former general, Edgar Justino Ovalle, who like Pérez Molina led operations that led to massacres in the early 1980s and is tied to the criminal military-linked networks.

Immediate electoral prospects may be grim. But the social movements that have been galvanized over the last months will likely continue—and could push for advances in ongoing human rights legal cases—regardless of the outcome of the next vote on October 25. Whoever wins will face a citizenry from whom the fog of fear has lifted, and demands for accountability and justice continue to grow.