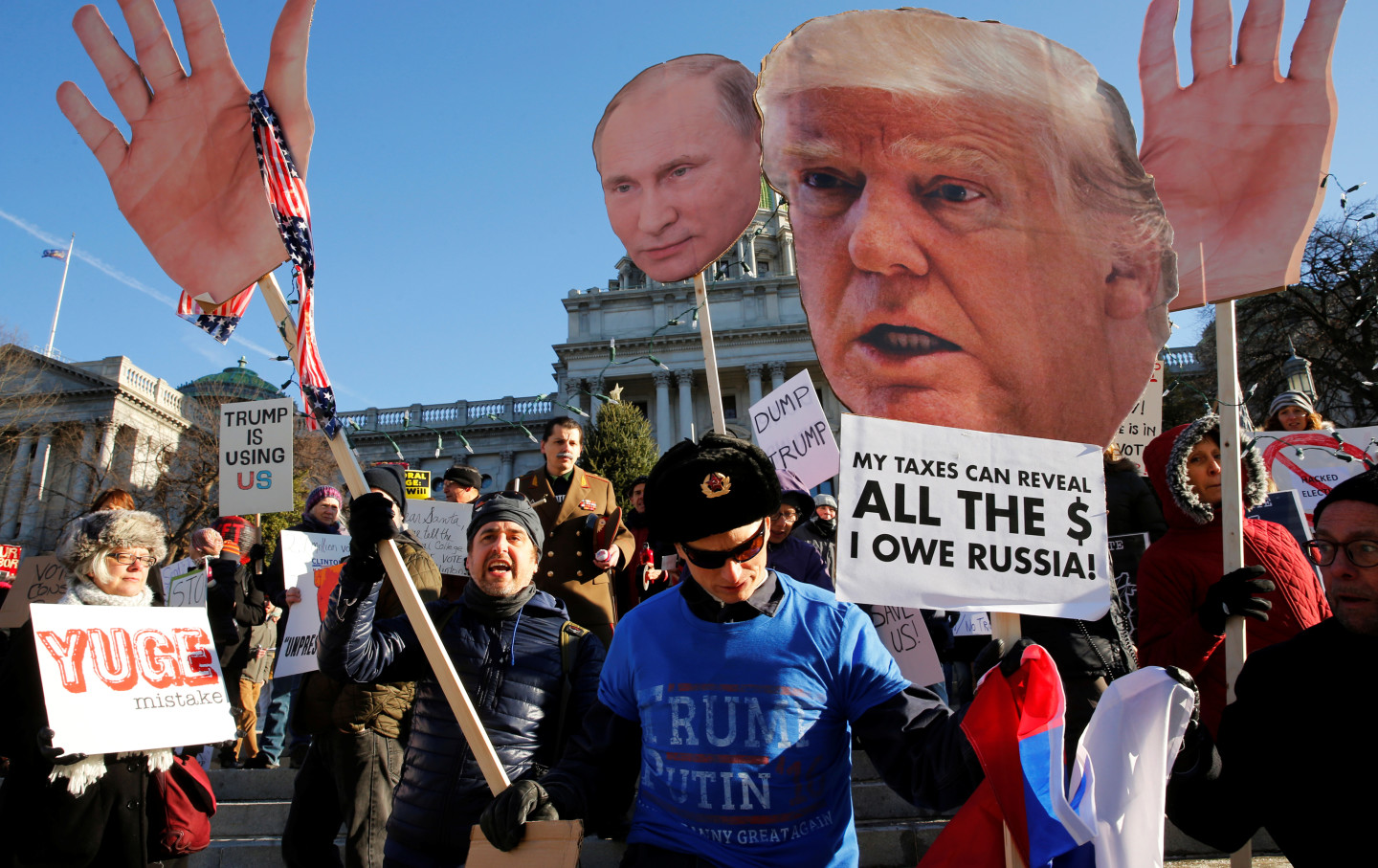 Demonstrators gather in Harrisburg, Pennsylvania, to protest Donald Trump amid allegations of Russian hacking in the election. (Reuters / Jonathan Ernst)

In the time between the November election and last Friday’s inauguration, the Center for American Progress (CAP) and its president, former Hillary Clinton aide Neera Tanden, have been at the forefront of what some are calling “the resistance.”

Yet one troubling aspect of “the resistance” seems to be its belief that Trump owes his surprise victory in the early morning hours of November 9 to the Russian government. Routinely citing the joint report on Russian cyber espionage by the FBI and the Department of Homeland Security, the unclassified report on Russia’s interference in the election by the Office of the Director for National Intelligence, and numerous reports based on leaks from unnamed Obama administration and intelligence officials, key leaders of “the resistance” have made it clear that they view Trump’s election as both illegitimate and, given his ties to Russia, a threat to the security of the US and its allies.

At CAP’s Washington headquarters on Tuesday,  senior senator from Illinois Dick Durbin laid out his case against Putin and Trump. But it was CAP President Neera Tanden’s introductory remarks that set the tone for the day’s discussion. Russia’s interference in the election, she claimed, “was perhaps the most underreported story during the entire 2016 campaign.” According to Tanden, Trump called on Russia to “breach America’s national security and spy on his opponent.” And Russia, said Tanden, “followed through with those orders.”

Durbin doubled down on Tanden’s message, calling November 8, 2016, a “day that will live in cyber-infamy.” Russia committed “an act of cyberwar” that “cannot go unanswered.” As such, Durbin announced that he is co-sponsoring legislation that would impose sanctions on Russia in retaliation for what are said to be its cyber intrusions.

Durbin also called for an independent, bipartisan commission to investigate the intelligence relating to Russia’s interference in the election (as has The Nation) and floated the names of Colin Powell and Sandra Day O’Connor as possible commission co-chairs.

But the bulk of his speech was dedicated to presenting what amounted to a bill of indictment against Russia, Durbin told the audience that Russia has continually sought “to undermine the Western democratic order” and accused Russia of acting like “a shameful bystander” in the fight against ISIS.

The broader policy aim of Durbin’s presentation was clear: Portraying Russia’s actions—in the United States and around the globe—in the most ominous terms, Durbin seemed intent on foreclosing the possibility of a policy of détente with Russia under President Trump. And on this, the position of Senate Democrats such as Durbin, Ben Cardin, Chris Murphy, and Amy Klobuchar is indistinguishable from the position of Senate Republicans like John McCain and Lindsey Graham, both of whom Durbin “saluted” in his remarks.

And while many see the intense focus on Trump’s possible ties to Russia as warranted, there remain good reasons to be skeptical of the case against Russia. At Tuesday’s event, it was left to the redoubtable Ray McGovern, a 27-year veteran of the CIA and member of the Steering Group of Veteran Intelligence Professionals for Sanity, to strike a note of caution. McGovern reminded Durbin that what is unfolding today, in the rush to accuse Russia of cyber warfare, is all too similar to what took place in the run-up to the Iraq war in 2003, when the Bush administration’s unverified claims regarding Saddam Hussein’s WMD stockpiles were taken at face value.

Still more troubling is that the current obsession with Russia may play into the hands of Trump administration hard-liners like CIA Director Mike Pompeo and attorney-general designee Jeff Sessions. If history is any guide, a new Cold War could very well result in the curtailment of free speech and civil liberties; the further empowerment and expansion of the surveillance state; an escalating nuclear arms race; and a general atmosphere of paranoia and xenophobia within the country at large. Such a development poses a perhaps insurmountable obstacle to the implementation of a progressive agenda.

Democrats might also want to consider whether the consuming focus on Russia might, over the long run, be counterproductive, in so far as it allows the architects of Clinton’s defeat to deflect from other important factors that played a role in the election outcome.

As Professor Nancy Fraser of The New School recently observed, if Democrats are going to learn any lessons from their defeat at the hands of the populist-demagogue Trump, “they will need to drop the comforting but false myth” that Clinton owes her loss to a “basket of deplorables” who were “aided by Vladimir Putin and the FBI.”

To put it another way, an inordinate focus on Putin and Russia in pursuit of a new Cold War may jeopardize the formation of a policy-based “resistance” to an administration that has already shown itself to be in thrall to the tenets of militarism and unrestrained, predatory capitalism.