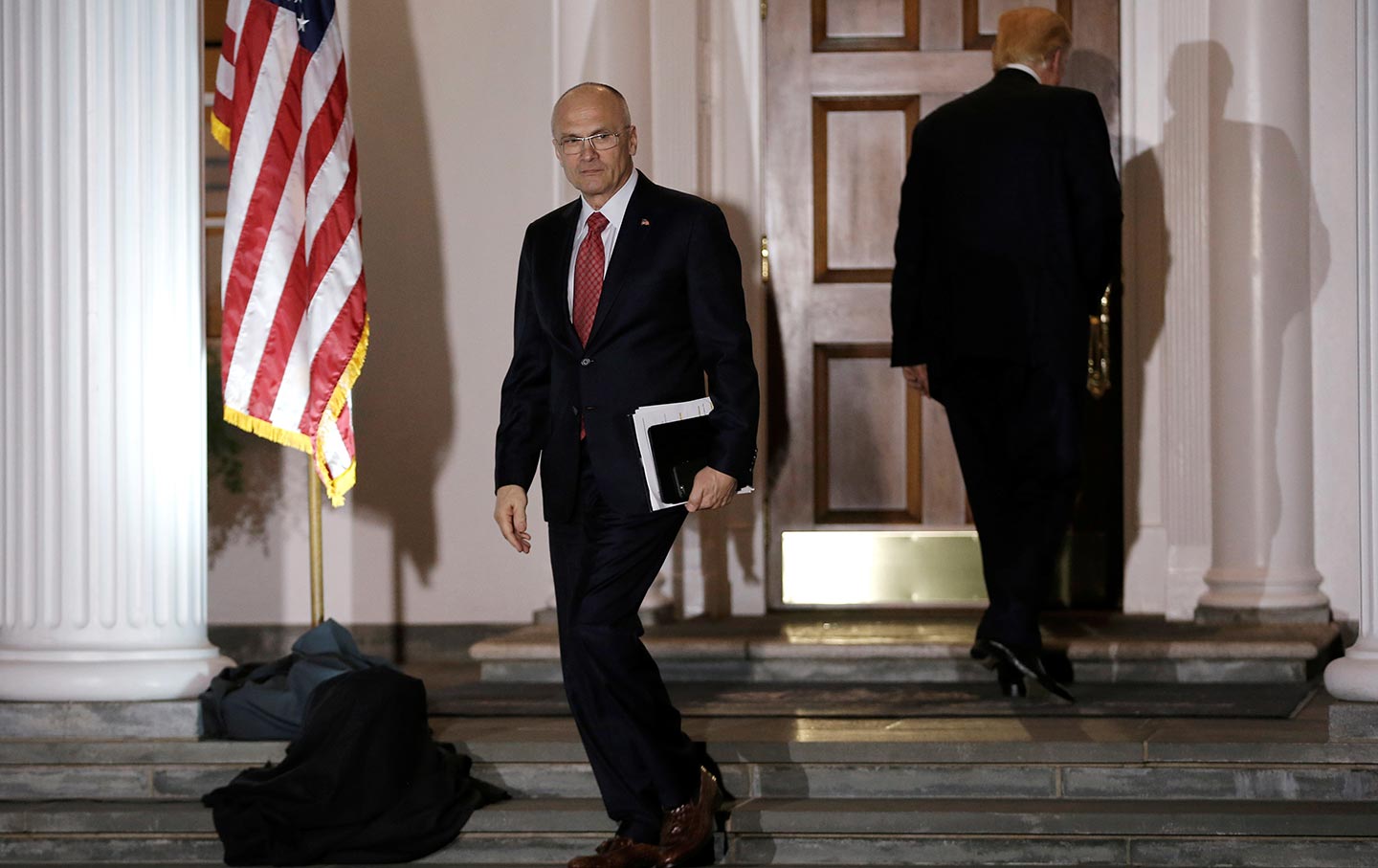 On December 8, days after Donald Trump chose Andy Puzder as his nominee for Labor Secretary, I predicted that he wouldn’t get confirmed. I didn’t have any special inside information, just the knowledge that Puzder’s beliefs included the one idea conservatives would not not abide: support for immigration reform. Breitbart’s Julia Hahn, who’s now working in the White House, wrote a scathing piece on December 8, excoriating Puzder for supporting “amnesty and flooding the labor market with foreign workers.”1

It wasn’t just that the immigration issue would sap Puzder’s support among the far right. It meant that the grassroots wouldn’t have his back if any other damaging information about Puzder revealed itself. And boy, did it reveal itself, resulting today in Puzder’s withdrawal from consideration for the cabinet post.2

The hidden catalyst in Puzder’s demise is actually Betsy DeVos. Her confirmation hearing went forward without completion of financial disclosures and ethics documents, to the outcry of Senate Democrats. Because the hearing went so badly and the confirmation became a mess requiring a tie-breaking vote from Vice President Mike Pence, Senate HELP Committee Chair Lamar Alexander vowed that Puzder would not get the same latitude, and would have to finish his forms before any hearing.3

Puzder, the CEO of the CKE restaurant chains (including Carl’s Jr. and Hardee’s), had such a complicated set of financial entanglements, the hearing got delayed four times. This gave opponents the chance to build up a wealth of opposition research on the nominee.4

I’d like to say that Puzder’s reign of terror as CEO, marked by allegations of widespread labor violations, wage-fixing, and millions of dollars in payouts to mistreated workers, turned the tide on his nomination. I’d like to think we live in a world where Republicans can be moved by fast-food workers protesting in the streets. I’d like to say that Puzder’s well-established views opposing the very laws the Labor Department oversees was a red flag for, after all, anti-labor Republicans. But I don’t think we live in that world. Two issues unrelated to Puzder’s business practices combined to sink him.5

The first was Puzder’s admission of employing an undocumented housekeeper. While this has done by cabinet nominees in the past, it didn’t look like it would, initially, ruin Puzder’s chances. After all, Commerce Secretary nominee Wilbur Ross admitted to the same thing, and he’s likely to be confirmed.6

The difference here is twofold. One, Puzder already had a shaky reputation on foreign labor; the housekeeper played into existing fears on the right. Second, it could be trotted out as a convenient excuse if anything truly damaging came to light. GOP Senators could curry favor with their anti-immigrant base by blaming the housekeeper for knocking out Puzder.7

The real trouble spot concerned revelations of domestic violence in Puzder’s former marriage to Lisa Fierstein. Initially, Puzder got a statement from Fierstein retracting the allegations, which appear in divorce records. She claimed it was only for show, to try to win a bigger divorce settlement. But then Politico revealed the existence of a 1990 interview with Fierstein on the Oprah Winfrey Show, where she appeared in disguise (as “Ann”) to talk about her history of spousal abuse. This interview came years after the divorce was finalized.8

Oprah’s company found the tape and shared it with Senators. Eventually a transcript of the video got released, where Fierstein said her husband “vowed revenge” for going public. The prospect of Puzder appearing in confirmation hearings, scheduled for tomorrow, while Democrats pummeled him with questions about domestic abuse was apparently too much for Senate Republicans to swallow. They appealed to Mitch McConnell by telling him that Puzder didn’t have the votes. Puzder quickly withdrew.9

The Oprah tape was precisely the kind of trip-up that compounded Puzder’s problem with the base on immigration. Conservatives wanted to abandon the guy anyway, and his difficulties offered them the opportunity. Even National Review, held up as the pro-business alternative to the rantings of the far right, editorialized against Puzder on Wednesday, entirely over the subject of immigration. Despite being a laudable (in their view) opponent of “knee-jerk” demands to raise the minimum wage or protect worker’s rights on the job, the editorial condemns Puzder for being “a reliable font of clichés in favor of higher levels of legal immigration” and “a representative of the worst reflex of corporate America on one of Trump’s signature issues.” So much for National Review’s “Never Trump” impulses.10

The right is signaling toward cracking down on all manner of immigration, and Puzder, simply put, got caught up in it. He’s a perfectly normal exploitative business owner seeking the cheapest labor possible. That once lined up with a business-oriented, conservative position, but now it’s untenable, and Puzder’s woes gave conservatives of all stripes a free chance to get into the fold, beating up on foreigners a bit in the process. The truth is that the modern Republican Party can forgive a lot, but cannot stand for anyone who holds a shred of sympathy for brown people.11

Puzder’s withdrawal likely sets the table for someone who shares his anti-labor views without favoring looser immigration laws. But Puzder was so comically over the top in his view of workers as little more than meat for a grinder, having him far away from the Labor Department is a small victory.12