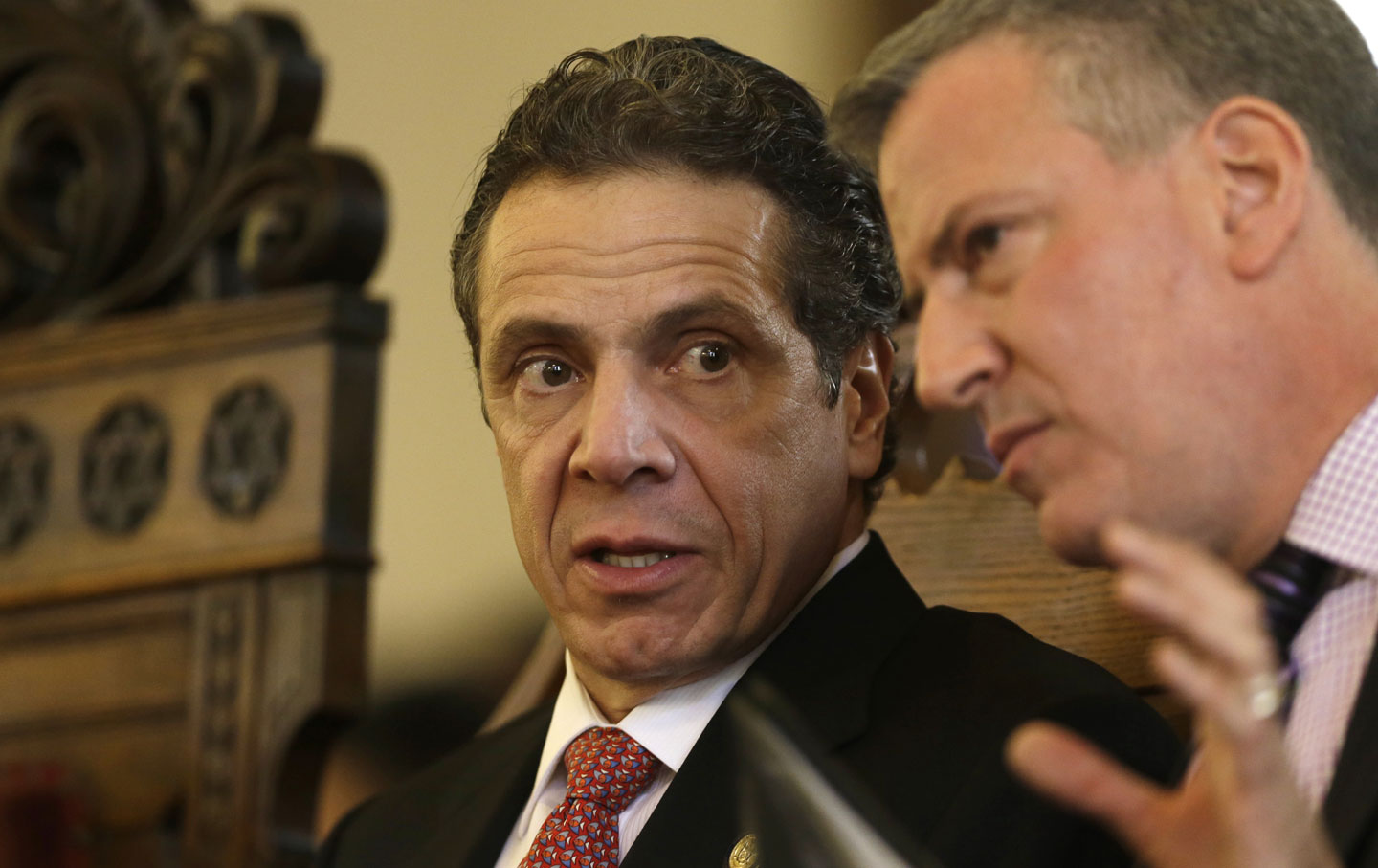 The national media are focused on the battle between Bernie Sanders and Hillary Clinton for the so-called “soul” of the Democratic Party. This is silly: Shake a Sanders supporter long enough and she ought to be able to admit that America isn’t likely to elect as president a 73-year-old Brooklyn-born Jewish democratic socialist from Vermont. Clinton’s massive advantages in money, endorsements, name recognition, and popularity will eventually result in a landslide, irrespective of who better represents the party. What’s more, it’s an imagined argument waged over symbols rather than choices. Campaigns are about offering hypothetical solutions that will likely never be tested by reality. Contradictions and compromises are simply wished away.

In New York, however, an actual battle for the future of the party is under way, and it’s not pretty. On one side is the recently reelected governor, Andrew Cuomo. A national champion of same-sex marriage and women’s rights, Cuomo is also a darling of the superrich who has forced through fiscal and financial policies that only a hedge-fund manager (or a campaign-finance chair) could love. To wit, he has capped property taxes, slashed the corporate tax rate, created tax-free zones for start-ups, and extracted concessions on wages and benefits from the state’s largest public-sector union—and that’s just for starters. If the future belongs to Cuomo, then the legacy of the New Deal (and, not incidentally, of his late father, Mario Cuomo) will finally become extinct. The Democrats, like the Republicans, will be a party of the wealthy for the wealthy—more specifically, the pro-choice, pro-gay-marriage, pro-immigration, and pro-science wealthy.

On the other side is New York Mayor Bill de Blasio, also a social liberal, who has focused on tackling the city’s inequality crisis. Almost alone among elected Democrats, he has argued for (slightly) higher taxes on the wealthy (in this case, to fund universal pre-K); has passed paid-sick-leave legislation and a limited living-wage executive order; and is fighting for a $15 minimum wage in the city, among many other initiatives. But most of his plans have been frustrated by resistance in Albany. This is the case even when such measures would cost the state nothing. (Cuomo likens his opposition to the city’s now-defunct “millionaire’s tax” to—I swear I’m not making this up—his father’s principled and politically costly opposition to the death penalty.)

Together with Bernie Sanders and Elizabeth Warren, de Blasio has become a high-profile spokesperson for the Democrats’ ideal of economic liberalism. But unlike the two senators, who are working within a recalcitrant, Republican-controlled Congress, de Blasio enjoys actual (albeit limited) executive authority over a vast bureaucratic apparatus—one that requires him to make distasteful deal after distasteful deal to advance his anti-inequality agenda.

Because so many of the mayor’s priorities require Albany’s approval, de Blasio chose to play patsy for Cuomo—sometimes even his punching bag—in the hopes of winning at least a nonaggression pact on economic matters. De Blasio knew that his ambitious agenda demanded it, however much his ego may have recoiled. This frustrated local progressives, whose hatred of Cuomo is boundless, but it made sense in the context of the relationship and helped the mayor make inroads in Albany during his first year in office.

Following Cuomo’s reelection last year, however, the tenuous peace fell apart. Cuomo went out of his way to mock and insult progressives, particularly the Working Families Party, which nominated him on the basis of promises that de Blasio thought he had secured from the governor. Ignoring his pledge to help win Democratic control of the State Senate, Cuomo worked to elect a Republican legislature, undermining the candidates of his own party (and especially those affiliated with the WFP). He returned to Albany weakened in the midst of multiple corruption scandals and then purposely and cynically batted down every one of de Blasio’s proposals, particularly those advancing the mayor’s two key priorities: affordable housing and early education. Barely bothering to conceal his identity, he also offered background quotes to journalists in which he delighted in screwing the mayor.

As the awful legislative session ended, de Blasio summoned reporters and unloaded on the governor—and he did so on the record. He accused Cuomo of caring only for “his own sense of strategies, his own political machinations,” and of engaging in vendettas “if someone disagrees with him openly.” Cuomo, de Blasio insisted, had no interest in “getting things done for the people of this city and, in many cases, the people of this state.” Rather, he was motivated by “deal-making” and “revenge.”

Locally, many politicians have rallied around de Blasio out of hatred for Cuomo’s high-handedness, although the tabloid media have predictably seized on the personality conflict between the two. (The fact that both are Italian men makes this even easier.) The substantive issue that will define the future of the Democratic Party, however, remains largely buried. Put simply, the question is this: In an age of essentially unlimited money power, just how much of the party’s policies are for sale to the highest bidder? Despite the compromises that de Blasio has been forced to make with the powerful constituencies that define what is politically possible, his priorities are consistent with those of rank-and-file Democrats and with the economic interests of 99 percent of Americans. Cuomo can get away with what he does, however, because he has the money men (and women) behind him, and the structure of state and local politics gives him the upper hand operationally. But in political terms, the battlefield is much larger than New York. It’s long past time that progressives noticed this and joined the struggle. The people who rely on liberals and progressives to fight for them do not need symbols; they need real change.