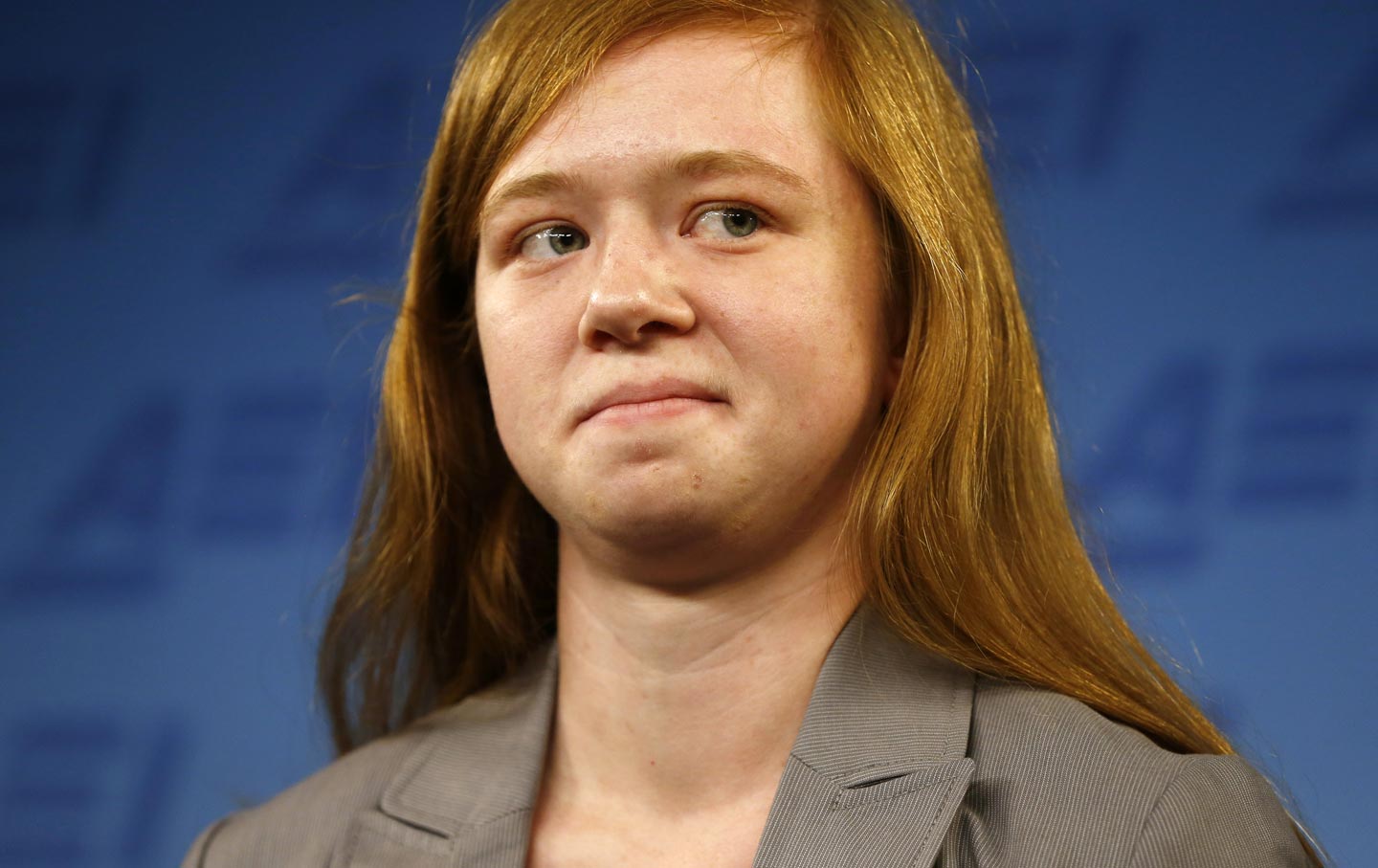 Abigail Fisher, who sued the University of Texas when she was not offered a spot at the university's flagship Austin campus in 2008, stands at a news conference at the American Enterprise Institute in Washington, Monday, June 24, 2013. (AP Photo / Charles Dharapak)

The Supreme Court re-hears Abigail Fisher’s case against the University of Texas today. Fisher, who is a white woman, claims that she was denied admission to UT because of her race. If the High Court rules in her favor, Fisher v. University of Texas at Austin will shake affirmative-action policy to its core and could knock the 14th Amendment askew in the process.

To recap: Fisher applied to the University of Texas, Austin, twice, once through its fall 2008 cycle and again through a provisional summer program. According to court documents, African American and Hispanic applicants accounted for just five of the students with lower scores and grades than Fisher who were offered provisional admission to UT through the summer program. The other 42 arguably under-qualified students were white.*

The original suit makes no mention of the 42 white students. Conversely, according to court documents, 168 applicants of color who had higher scores than Fisher were not admitted to UT.

What has intrigued me most about Fisher’s case is her earnest sense of self-righteousness even in the face of these damning facts. “There were people in my class with lower grades and who weren’t in all of the activities I was in who were being accepted into UT,” Fisher remarks in a promo video for the case. “And the only difference between us was the color of our skin.”

In 2013, the Supreme Court kicked Fisher’s case back to the Fifth Circuit court, vacating the lower court’s ruling in favor of UT’s race-conscious admissions policy because it “did not apply the correct standard of strict scrutiny.” In her statements to the press, Fisher exuded the nobility of a martyr: “I am grateful to the justices for moving the nation closer to the day when a student’s race isn’t used at all in college admissions.”

If we take Fisher’s claim to be more than a cynical ploy in the decades-long campaign to erode affirmative action, then it forces the question, How can she truly feel like a victim of racism?

Since its inception, contemporary affirmative-action policy has attracted the attention of psychologists. Beginning in the 1970s, Americans’ attitudes toward affirmative action have been studied as not just a political phenomenon but a psychological one as well. The myth of the unworthy applicant is pervasive, and it both impacts the way white people—specifically men—think about themselves and the mental health of people of color.

In one 2001 study, researchers interviewed nearly 200 employed white men in public places in Chicago and New York City. They found that thoughts about affirmative action served to justify preexisting opinions of coworkers. The lower the opinion the men held about a coworker, the more they regarded affirmative action as the reason why the coworker was hired.

A 2007 study led by a UCLA researcher found that the white men studied tended to view their own successes and merits more favorably when they believed that affirmative action played a role in a given selection process, and thus may engage in a “downward social comparison” toward assumed beneficiaries of the policy.

According to researchers, the dominant perception undergirding this positive self-image is the idea that affirmative action is a quota system in which merit or accomplishments do not matter as much as membership to an underrepresented group. So in this case, the subjects’ anti–affirmative action self-talk was used to denigrate the accomplishments of supposed beneficiaries and elevate the status of people (themselves) who usually do not benefit from the policy.

But some early opponents of affirmative action feared it would sow a sense of self-doubt in applicants, who would attribute their good fortune in education or employment to group membership rather than to merit. They feared white women and people of color would internalize that denigrating notion of membership, resulting in poorer performance.

A 1989 study by Rupert W. Nacoste found this concern to be misplaced. Some applicants experienced self-doubt when they were told that they were selected using affirmative action, but Nacoste noted that this self-doubt did not have a single source. “In the laboratory, we have seen that affirmative action procedures can generate self-doubt. Outside the laboratory, such self-doubt among minorities and women might often be matched with disrespect from White males. It is easy to see how the negative cycle could begin and continue.”

There’s a growing body of research that shows racism causes more than self-doubt in the individuals affected by it. This past September, the Public Library of Science released a review of every published study on the intersection of racism and health in its peer-reviewed publication PLoS One. First popularized by social behavioral scientist Nancy Krieger, “embodied inequality” is a concept that takes into account the ways in which social processes—including discrimination, poverty, and other forms of inequity—can affect a person’s health. While much of the research has focused on physical health disparities in black and Latino communities, much has been written about discrimination and mental health as well. The PLoS One meta-review, which was comprised of 293 studies published in 333 articles spanning 30 years, found an overall stronger correlation between racism and negative mental health outcomes than physical health outcomes.

According to researchers, perceived racism is a stressor that contributes to “the dysregulation of cognitive-affective regions” of the brain, including the prefrontal cortex, anterior cingulate cortex, amygdala and thalamus. Dysregulation in these areas shares similar “pathways,” or neural circuits, with mental health issues such as depression, anxiety, and psychosis.

In this respect, one must recognize Fisher’s unworthy-minority-applicant rhetoric as belonging to a broader set of racial biases that not only attack the material opportunities for people of color, but also take aim at our minds, bodies, and souls.

Correction: A previous version of this story misstated the total number of students offered provisional admission to UT through the summer program.