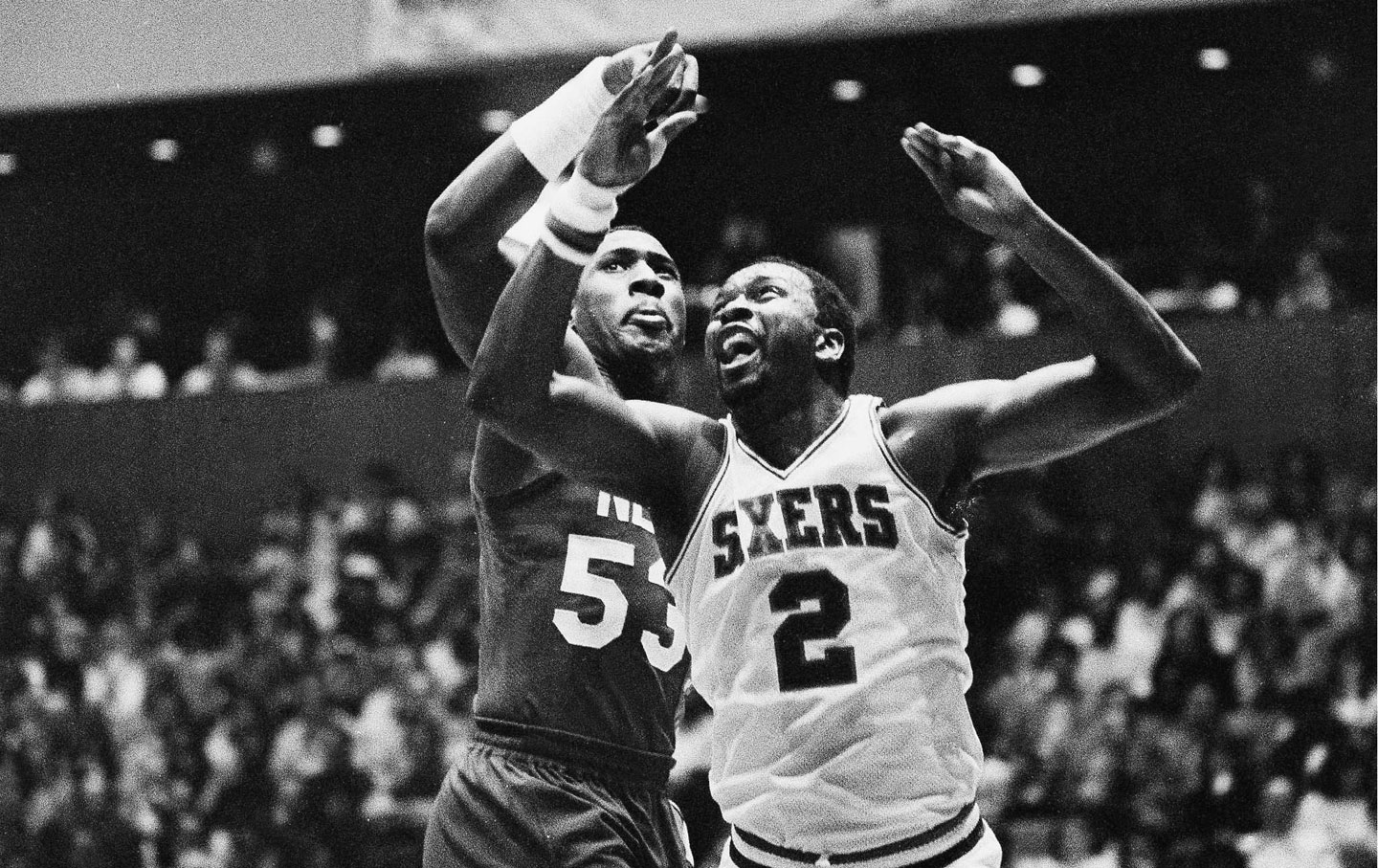 Philadelphia 76ers Moses Malone is held in check by New Jersey Nets Darryl Dawkins as they battle under the boards during first half NBA Playoff Action in Philadelphia on Friday, April 21, 1984. (AP Photo/Rusty Kennedy)

Following both the first week of the NFL regular season and a historic US Open tennis finals, it’s understandable why one would not want to read a column about death. But it is difficult to think of little else after the sudden passing of NBA legend Moses Malone, whose end at the age of 60 comes just two weeks after fellow center and Philadelphia 76ers alumnus Darryl Dawkins died at 58. One of Dawkins’s most famous maxims–and the man known as “Chocolate Thunder” had many–was, “When everything is said and done, there is nothing left to do or say.” With all due respect, I disagree. When it comes to the linked legacy of Dawkins and Malone, there is still a great deal to say.

These two men had little in common on the court. Dawkins is best known for highlights of breaking backboards while Moses was a three-time NBA most valuable player and first-ballot Hall-of-Famer. Dawkins was one of the most quotable players in history while Moses defined the strength of silence (although Moses could be hilarious when inspired. He once said, “I never thought I’d lead the NBA in rebounding, but I got a lot of help from my teammates–they did a lot of missing”).

But they shared an ability to connect with those around them, spurring a particularly raw outpouring of grief, rare in the world of sports.

In a statement released upon hearing of Moses Malone’s death, Charles Barkley said, “The man I called ‘Dad’ passed today. Words can’t explain my sadness. I will never know why a Hall of Famer took a fat, lazy kid from Auburn and treated him like a son and got him in shape and made him a player. Every time I saw him I called him ‘Dad.’ I hope he knew how much I appreciated and loved him.”

When Darryl Dawkins died, 19-year-old number-one draft pick Karl-Anthony Towns attended the funeral and told the press, “He’s family. He’s like my uncle…. All I know is ‘Uncle Darryl.’”

These were men who changed the people around them. They took teammates, family members, and especially kids aside when the cameras weren’t on, and imparted indelible memories as casually as some of us send tweets. They took to mentoring not as a burden but as a blessing, feeling the need to be kind for the sake of being kind. In our transactional culture, where it often seems nobody does anything unless something is in it for them, I’m not sure how many people like Moses Malone or Darryl Dawkins we can afford to lose.

But Malone and Dawkins of course share something else besides their uncommon abilities to connect with others. They are also the two original prophets of justice about the sham amateurism of NCAA basketball. Long before the rest of us had figured it out, long before it was of a fashion to point aghast at college sports, long before coaches made multimillion-dollar salaries, long before the NCAA signed multibillion-dollar contracts with cable networks—hell, long before there was such a thing as cable—these two men saw the worth and value of their own labor and they refused to be exploited.

The backlash was immediate and long lasting: No one was “allowed” to bypass college again until Kevin Garnett two decades later. For the soft-spoken Moses, they called him stupid with a casual and undeniably racist cruelty. That was the only way the media could explain to the public why he would not choose matriculating onto a college campus. Moses, with his Southern drawl, was a figure of mockery, until he changed the game, turning offensive rebounding into high art. As Matt Moore from the indispensable CBS Sports twitter feed @HPbasketball pointed out, “Moses lead the ABA/NBA in offensive rebounds his first EIGHT SEASONS and then again at age 34!”

Moses also embodied a description he once made of teammate Maurice Cheeks when he said, “The quiet guys always have surprises up their sleeves.” The surprise from Moses was that he understood the situation far better than the so-called experts.

In a remarkable 1979 Sports Illustrated article by Frank Deford–also tweeted by Matt Moore–Deford quoted Moses saying, “Peoples could say things about me, but I didn’t pay no attention. I didn’t wants to know what they was saying because I was the only one knew what’s true…. I knew what peoples was saying and so I told the Stars, ‘It don’t make no difference how old I am, because I still think I can bust y’all. You just watch my action.’”

Deford then quoted fellow NBA All-Star and anti-NCAA renegade Spencer Haywood who said, “The colleges are just there to use you. If you’re black and haven’t a nice, rich mommy and daddy–and now, with the Bakke decision [the Supreme Court case that took an axe to black affirmative-action programs at public universities], you haven’t even the government on your side–then you have no choice. You take advantage of what you have as soon as you can.”

Moses did not talk much publicly about the poverty that defined his youth, but Darryl Dawkins did. In a 1988 Sports Illustrated article about Dawkins’s inability to reach his otherworldly potential–a potential, the article argued, he may have found if only he’d gone to college–Dawkins expressed zero regrets. He said, “I knew when I saw my grandmother working two jobs just to barely make ends meet, and she gave me her last 10 dollars just so I could buy some sneakers, that I had to do it.”

The motto in Dawkins’s rural-based family was, “If you don’t work, you don’t eat.” It wasn’t just tough love. It was a basic truth. If you’re not bringing in the crops, or helping raise the chickens, there would be no food. It was a reality often ignored in the United States and utterly misunderstood by those hired to cover them.

These two men, so mocked, so belittled, were so much smarter about the actuality of the machine they were entering than the alleged wisemen in charge of our institutions of higher learning and the media paid to cover–and cover up–the sham amateurism of “student-athletics.” They were smarter because they were the ones who had to live in a poverty defined by the rural South and the legacy of Jim Crow, where “the plumbing often didn’t work, and for a long time there was a big hole in a wall where a window was supposed to be.” They were smarter because they understood that while the business was “just there to use you,” your teammates existed outside that shell of alienation and could be your strength and even your family. They understood that everything off the court might be a dirty business, but the sport could be pure poetic glory even at its most rugged, even under the boards. They were smarter because they never let the game play them. Their legacy is seen in the legions of heartbroken mourners and in their belief that the dignity of their labor was non-negotiable.