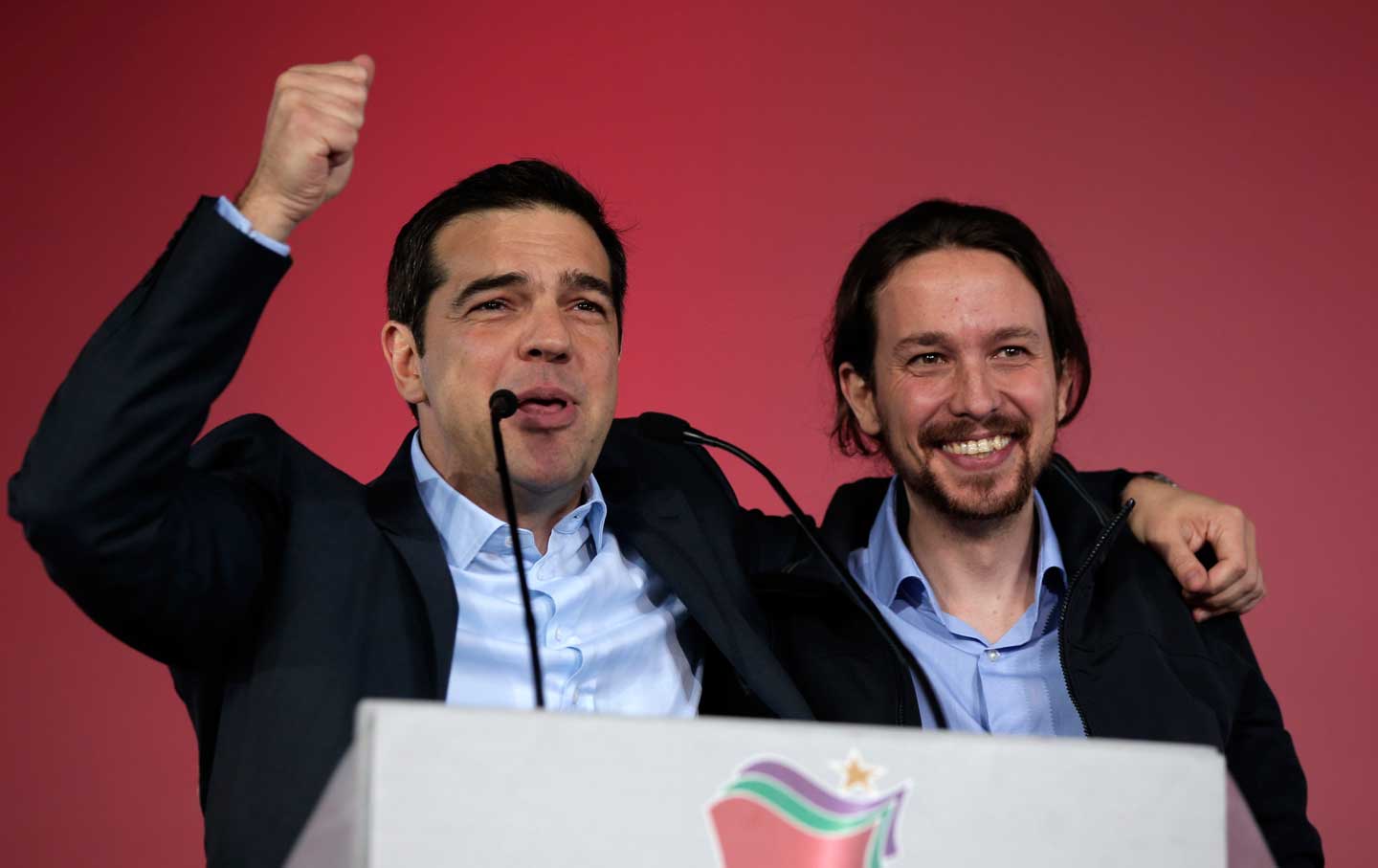 They emerge one after the other—the anti-austerity parties, the purveyors of hope, the new or newly popular leaders and formations—from Greece to Spain to Ireland, from Turkey to Israel, from Burlington to Britain. They rally thousands, speak out for the dispossessed, challenge moribund elites; they are vilified as populist, deluded, dangerous; they win elections (Greece’s Syriza, Barcelona’s Mayor Ada Colau) or cross parliamentary thresholds (Israel’s Arab Joint List or Turkey’s HDP). They are in a sense successors to mass movements (Occupy, the indignados, Gezi Park, the Arab Spring). They glow for a short time on the bleak world stage; they are blocked, or fail, or fade, and new ones take their place.

Jeremy Corbyn puts his bid for the Labour Party leadership in that company. “There is some kind of global movement going on,” he said last week in Middlesbrough, “and I think it’s something the Labour Party should be able to understand and embrace.” But what kind of movement is it? How much do these different forces have in common? In a globalized economy where capital moves freely, what does it mean to act locally? What would it take—what would it even look like—for all these small-d democrats, proponents of human rights and human dignity, actually to work together?

These are all big questions, to which I have no answers. But there may be some lessons to draw from the Greek conundrum (not a Robert Ludlum novel), adduced by both proponents and opponents of austerity. Britain, of course, is not Greece, however much Tory austerians threaten us with its fate should we refuse to worry about the deficit. To state the obvious, Britain has its own currency and untold wealth sloshing about in its business and financial sectors; its GDP is the fifth-largest in the world. Labour partly lost power in 2010, as Corbyn has pointed out, for failing to make the argument against austerity, the Trojan horse for dismantling labor rights and the welfare state. Banks, says Corbyn, crashed the economy, but “we were accepting the idea that the rest of society had to pay for the banking crisis.”

And yet part of the left, in Britain and beyond, also fell into the trap of thinking that Greece’s Syriza could serve as a general example—or a global vanguard. Syriza’s refusal to commit national hara-kiri by taking Greece out of the euro with no currency reserves, a banking system close to collapse, and a thousand refugees landing daily on its shores has met with petulant disdain from some of those who projected too much hope onto the party. “I may have overestimated the competence of the Greek government,” murmured New York Times columnist Paul Krugman, anti-austerian guru and darling of the pro-Syriza opinion pages.

Well, yes, you may have. You may also have underestimated the weight and specificity of Greece’s history, politics, and day-to-day experience, as well as the constraints that the Syriza government faced. And now that Syriza has capitulated—“failed”—I think we’ll see fewer of the solidarity rallies in European cities that so warmed the hearts of those who took part in them, as well as of some miserable Greeks who felt a little less alone. Spain’s Podemos, once seen as Syriza’s sister party, backed away pretty quickly once it understood that Tsipras had his hands around a poisoned chalice. Disappointment is corrosive. Solidarity—or internationalism—has to acknowledge local differences and local realities. Otherwise it’s of limited use, and potentially self-destructive.

Enough pessimism for now. Corbyn’s campaign has added another current to that international groundswell of insurgent politics, whose meanings are not yet clear. If he wins, he may become the cynosure of the anti-austerity left in Europe and beyond; he may help to undermine the neoliberal orthodoxy that even the IMF doubts. But since all politics are local, it’s here in Britain that his success or failure will above all be felt. The stakes are very high. His most urgent tasks will be domestic: to oppose the Tory cuts to social security, benefits, housing, and public services that threaten thousands of families and what’s left of the British welfare state; to end the casualization of labor and exploitation of the young; to rebuild a divided, disoriented, disconnected Labour Party and mobilize new voters. He will have to lead the party through David Cameron’s referendum on the European Union, which may tear all of British politics to shreds, and into an election contested in a landscape no one can yet envision.

There is, perhaps, another parallel with Syriza: a vote for Corbyn is a break, a leap framed partly by a lack of convincing alternatives. “‘Hope,’” wrote Emily Dickinson, “is the thing with feathers.” Corbyn has dared to invite that thing into the room; whether you choose to ride it depends on how much faith you have, and how much you have to lose