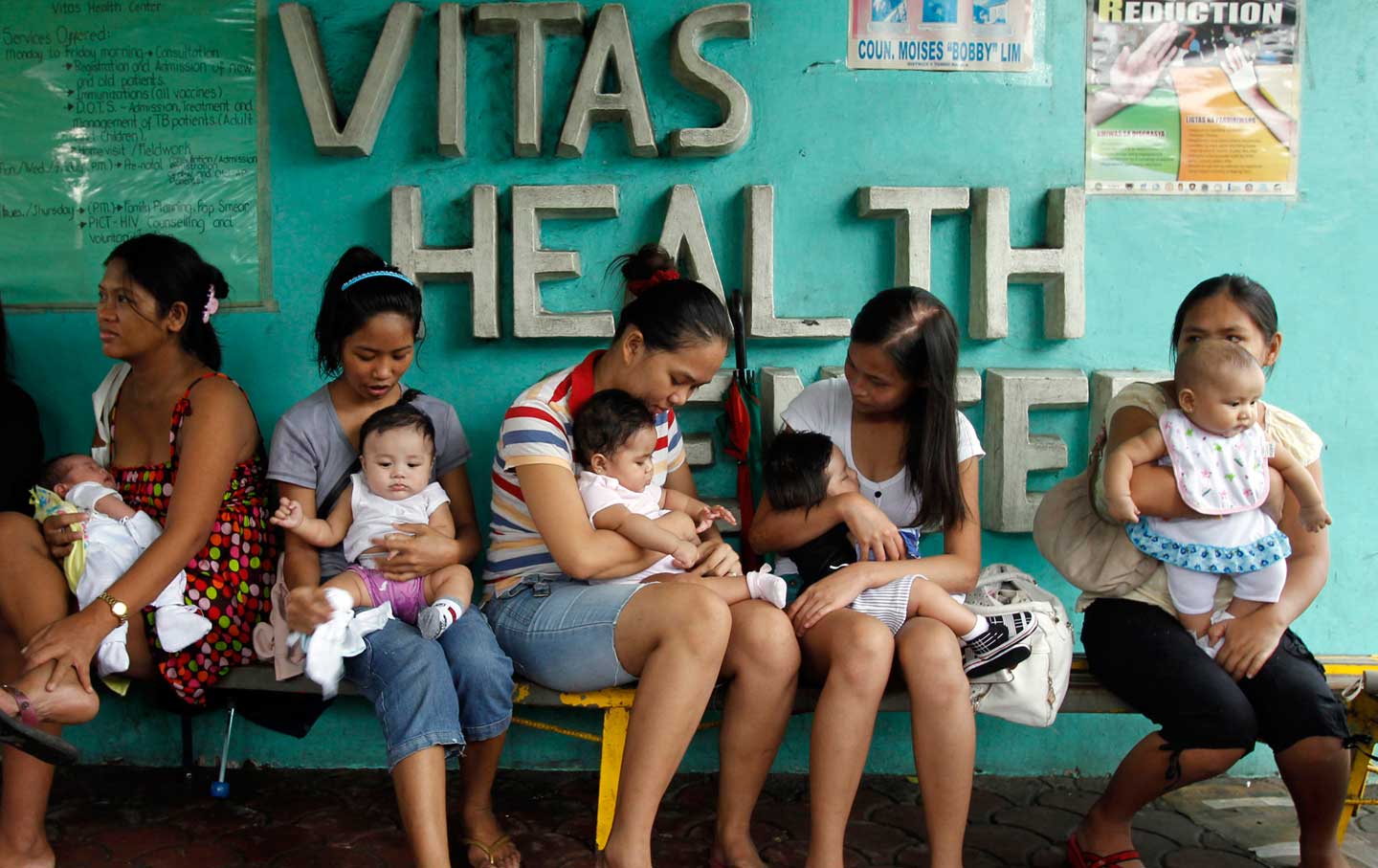 Young mothers at a health clinic in Manila. In 2012, the Catholic Church opposed a bill guaranteeing access to birth control and sex education in the Philippines. (Erik de Castro / Reuters)

If the world consisted only of straight men, Pope Francis would be the world’s greatest voice for everything progressives believe in. He’s against inequality, racism, poverty, bigotry and, as his recent encyclical Laudato Si’ made eloquently clear, the rampant capitalism and “self-centred culture of instant gratification”—including excessive meat eating—that fuel climate change and may well destroy the planet. He has a gift for adding warmth to harsh and inflexible dogma, as with his famous comment on gays: “Who am I to judge?” As I write, he has just announced a special year in which any priest may absolve a woman for having an abortion, as long as she is “contrite.” No wonder leftists and liberals and even secular humanists love him. Naomi Klein seemed positively starstruck in her New Yorker piece about her recent visit to the Vatican, where she spoke at a press conference and symposium about the encyclical. Indeed, she was so impressed with the pope’s “theology of interconnection” and “evangelism of ecology,” she forgot to mention that he had nothing to say about the gender inequality that undergirds and promotes our onrushing disaster.

I know I risk being the feminist killjoy at the vegan love feast, but the world, unlike Vatican City, is half women. It will never be healed of its economic, social, and ecological ills as long as women cannot control their fertility or the timing of their children; are married off in childhood or early adolescence; are barred from education and decent jobs; have very little socioeconomic or political power or human rights; and are basically under the control—often the violent control­­—of men.

For example, consider population growth. Because of its association with coercion, racism, and doomsday predictions that failed to materialize, it’s hard for progressives to talk about overpopulation. But we must: There are 7.2 billion people on the planet—since 2000, we’ve added around 1.2 billion, roughly equivalent to the entire population of North America and Europe. At the current rates of increase, there will be 9.6 billion people by around 2050. Population density affects everything: climate change, species loss, pollution, deforestation, the struggle for clean water, housing, work, and sufficient food. How can we take the pope seriously if he refuses to face these facts?

Pope Francis places the blame for the sorry state of the planet only on excess consumption by the privileged and says that international campaigns for “reproductive health” (scare quotes his) are really all about population control and the imposition of foreign values on the developing world—as if the church itself was not a foreign power using its might to restrict reproductive rights in those same places. But why is it an either/or question? Why not: There are billions of people who want a modern standard of living, which makes a lot of sense compared to the alternative—backbreaking farm labor in a poor village with no electricity or running water—and those desires can only be satisfied if people have fewer children, which happens to be what they want anyway.

True, Pope Francis did say that Catholics needn’t breed “like rabbits,” but he waved away the need for “artificial” birth control. If only those rabbits would use natural family planning! Interestingly, he made that comment as he was leaving the Philippines, a largely Catholic country where the powerful church hierarchy has fought tooth and nail against realistic sex education and government funding of contraception. Not coincidentally, the Philippines has the highest fertility rate among the 10 countries in the Association of Southeast Asian Nations.

According to a recent report from the Bixby Center for Global Reproductive Health at the University of California, San Francisco, providing family planning to the 225 million women around the world who want it but can’t get it could meet 16 to 29 percent of the necessary decrease in greenhouse-gas emissions. Doesn’t meeting a desire that women already have seem a strategy more likely to succeed than turning the world vegetarian or keeping the new middle classes in China and India from buying cars and taking vacations? Educating girls, keeping women in the workforce, and providing good healthcare for women and children are crucial human-rights goals that also reduce the number of children a woman has.

It’s remarkable that the pope didn’t address a single sentence of his encyclical to these issues, especially since it otherwise deals so intelligently with the interconnection of so many disparate phenomena. Francis has often said that men and women have different gifts and “complementary” roles. He has spoken sweetly of motherhood and femininity and derided the movement for women’s equality as “female machismo.” Yet in Laudato Si’, the word “women” appears only in the phrase “men and women”—that is, people. Don’t women have anything special to contribute to solving climate change beyond serving their too-numerous children less fast food?

As climate change heats up, it’s women who will bear the brunt of it, because they are the majority of the world’s poor. Especially in the developing world, they’ll be contending with drought, food shortages, flooding, and forced migration, along with increases in the usual brutalities like rape, violence, trafficking, and war. Under such circumstances, to deny them the ability to control how many kids they bring into the world is to condemn millions of women to the hardscrabble desperation that the pope says he wants to prevent.

There is a great deal of research on how women’s rights, including reproductive rights, can ameliorate a range of global ills, including poverty and ecological disaster. The pope prefers to elide the whole issue, except when it comes to abortion, which he sees as close to the root of the problem: “Since everything is interrelated, concern for the protection of nature is also incompatible with the justification of abortion. How can we genuinely teach the importance of concern for other vulnerable beings, however troublesome or inconvenient they may be, if we fail to protect a human embryo, even when its presence is uncomfortable and creates difficulties?” Given that the church is such a latecomer to concern for the earth—until recently, the standard theological view held that God put nature here for humans to use—there’s a certain chutzpah in using this last-minute conversion to push the same old forced-birth agenda.

Never mind the 47,000 women who die every year in illegal abortions, and the even greater number who are injured: Abortion causes glaciers to melt and species to vanish. From Eden to ecology, it’s always women’s fault.