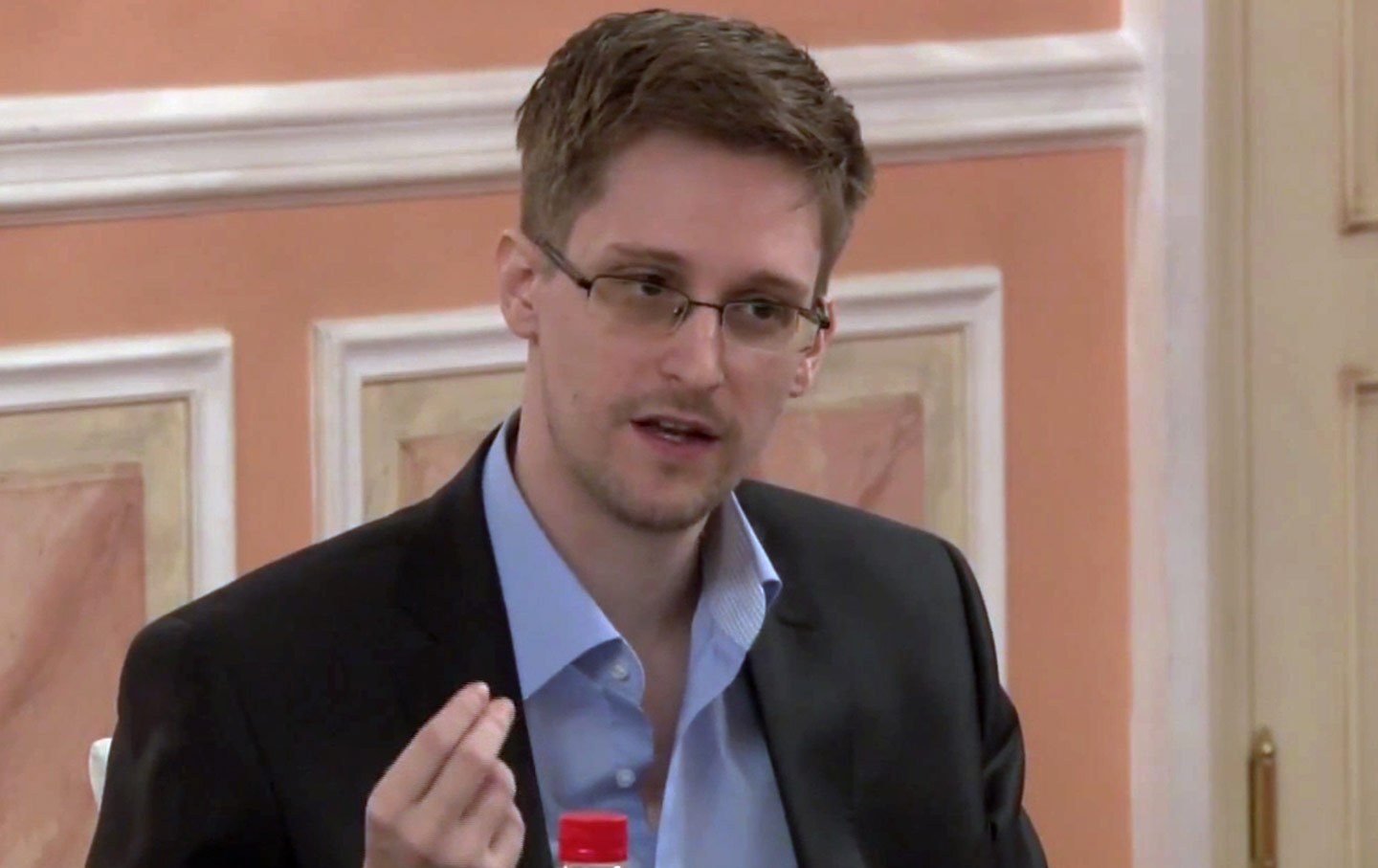 “I never thought that I would be Big Brother,” jokes Snowden as he is lowered down from the cloud and on to a projector screen. The crowd greets him like a rock star. He looks sheepish, perhaps overcome by the fervor of an audience in a country that he has no possibility of returning to under the present circumstances.  On the stage to greet him is poet Ann Lauterbach and the Intercept’s Peter Maass. The dissident, the poet, and the journalist engaged in discussion at the penultimate talk of Bard College’s “Why Privacy Matters” conference held in October in the spirit of the college’s matron philosopher Hannah Arendt.

Whether it is state-sponsored or corporate surveillance, or increasingly sousveillance, it seems privacy has become a relic of bygone days. In some sense, we have become unquestioning of this new reality of zero privacy put forth by government and corporate interests alike. But then I look up and see Snowden.

Lauterbach asks him, “You opened your Twitter by saying you are neither a hero or a traitor, but a citizen with a voice…. What does privacy mean to you?” Snowden responds, “Privacy isn’t about something to hide it is about something to lose. It is that safe space to act, think, and share, without prejudgement—without every idea, every utterance being tracked, recorded, and stored.” His thoughts echo Hannah Arendt, for whom privacy was a place for refuge from one’s public life. The darkness of this refuge allowed for a space to grow, to think, and become truly individual. Without this space to think and judge, we do not simply lose our private life or our ability to hide, but we also lose our potential public life of democratic engagement. It is precisely this engagement that Snowden champions on this college campus.

“Read. Criticize. Think. Decide for yourself, ” he tells the audience. Snowden speaks of a future where encrypted communication is the norm, forcing the surveillance apparatus to be more selective in targeting its subjects. He repeats the sentiment that it is not him but the information that he has revealed that should be the subject of public conversation.

There is a captivating power to Snowden’s persona. “I’m not a politician. I’m not a leader and I don’t want to be. I am an engineer,” he says, “who simply saw something that I thought people should know. I swore by oath to protect the constitution against all enemies foreign and domestic.” He makes no claims to be a radical political activist—he makes no claims towards radicalism at all. Yet he remains the single most eloquent speaker on privacy today. Even in outrage, Snowden seems composed, speaking in measured tones while his words reveal a deep-seated anger: “Why can’t these things be debated with the public? Why can we not seem to have a say in them? Why can’t these issues be heard in open courts, until an individual, an ordinary citizen, risks their freedom, their life, to share it with the press, in a circumstance we know is going to get them punished?… We are structuring our society in a way that we can’t know the truth, unless someone self-nominates to light themselves on fire.”

It is precisely this self-immolation of the whistle-blower that has forced the creation of a public space in which to engage with the issues of the right to privacy. Snowden says being called a hero is “otherizing,” acknowledging that it is only in the plurality of the public that his actions have meaning. It is through his actions that we have been able to create a collegiate forum to ask “Why Privacy Matters.”

It is I think the earnestness of his speech that gives Snowden such power. His words and deeds have not parted company, nor do they hide nefarious intentions (despite what some members of the surveillance state might say). He acted solely in the public interest with a reverence for the constitution that transcends governmental authority.

Arendt writes that power is actualized when “words are not used to veil intentions but to disclose realities, and deeds are not used to violate and destroy but to establish relations and create new realities.” If there is a new reality to be had it can be summed by what some have called “the Snowden effect”—the post-Snowden momentum of privacy advocacy: the NSA’s phone spying program ruled illegal, the nullification of Safe Harbor agreements between the United States and the European Union, and the signing of the “California Electronic Communications Privacy Act” into law.

The world of privacy advocacy is changing rapidly. Recently, in a hasty attempt to address issues of cyber security, the Senate passed the controversial Cybersecurity Information Sharing Act, a bill civil-liberties advocates say will allow the government to collect vast troves of data unchecked, undermine the Freedom of Information Act, and potentially threaten whistle-blowers by failing to limit what the government can do with the vast amount of data shared under the proposal.

It is clear that the right to privacy will be a continuous struggle. It always has been. Yet the astonishing number of academics and corporations that have come out against CISA  highlight the resonance of Snowden’s actions.

The Snowden Effect extends beyond the auditorium where Bard’s “Why Privacy Matters” conference was held, revealing itself on the paths to the dining facility, as students discuss and reevaluate their use of social networking, or perhaps even at a midnight festival at the vegetarian house, as an intoxicated girl rebelliously calls for abolishing the National Security Agency (teetering on the fine line between drunkenness and idealism).

It is the creation of these multiple spheres of engagement that reveal the true value of Snowden’s work. He has done no less than to spark one of the most critical discussions of our time. This is the momentum of the Snowden Effect, the power of actions and speech serving the cause of democratic engagement.