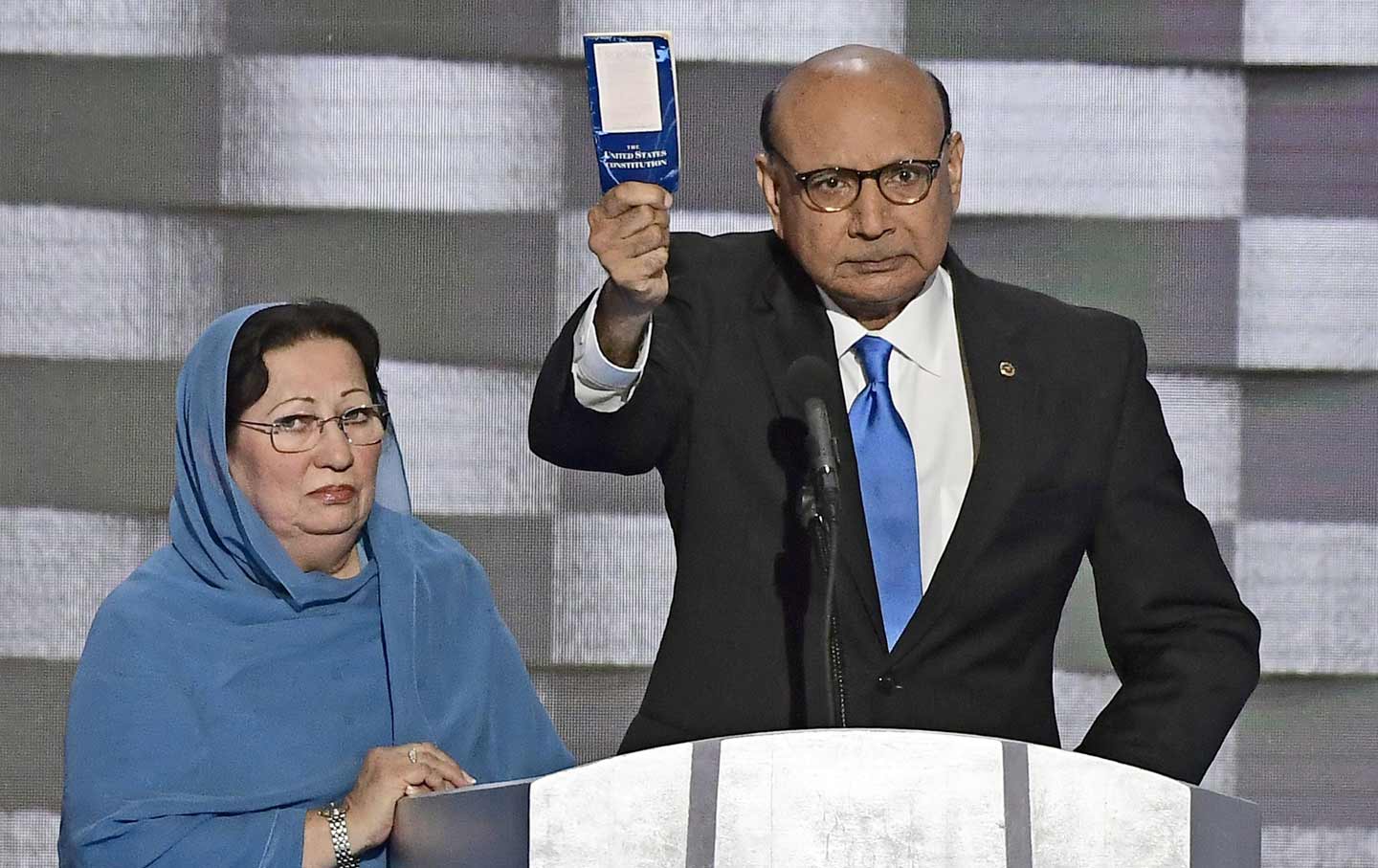 Khizr Khan holds a copy of the US Constitution as he makes remarks during the fourth session of the 2016 Democratic National Convention. (Rex Features via AP Images)

This election season has been bruising and divisive, but it has had the one advantage of clarifying for Muslims that we are conditional citizens. We must constantly prove our allegiance by showing gratitude to America, muting criticism of the government and its foreign policy, and denouncing any Muslim, anywhere in the world, who takes it upon himself to commit an act of violence. If we fail to abide by these rules, our loyalty is called into question.

July’s Democratic National Convention provided a clear example of what I mean by “conditional citizenship.” On the final night of the convention, Khizr and Ghazala Khan, a Muslim couple from Virginia, took to the stage to speak about their son Humayun, an Army captain who was killed in the Iraq war in 2004. Mr. Khan praised America and eulogized his son, but he also criticized Donald Trump for his proposal to ban Muslims. Pulling out a copy of the Constitution from his breast pocket, he asked, “Have you even read the United States Constitution?” It was an electrifying moment, and it turned the Khans into instant media sensations.

Had this challenge about the Constitution been made by a non-Muslim, Trump’s response would likely have been a dismissive “Yes, I’ve read it many times, believe me,” perhaps followed by an insult of the kind he frequently levels against his critics. But because the challenge was made by a Muslim, Trump resorted to bigotry. He insinuated that Ghazala Khan, who stood silently by her husband’s side, had been prevented from speaking because of her religion and that Khizr Khan had “no right” to say what he did. Four days after the convention, a Trump surrogate began circulating rumors online that Khizr Khan had “ties” to the Muslim Brotherhood and that Captain Khan was a jihadist who had joined the Army in order to kill Americans. This was how, in less than a week, Humayun Khan went from being remembered as a war hero to being cast as a stealth terrorist. Captain Khan’s citizenship had been conditional on his service and his silence, but when his father spoke up to demand equal rights, the entire family was smeared.

The Khans are not alone. Whenever Muslims become politically prominent, their views are scrutinized and their visibility is challenged. In July, when Fareed Zakaria criticized Donald Trump’s speech at the Republican National Convention, Ann Coulter immediately mocked his “thick Indian accent.” I do not recall anyone attacking Fareed Zakaria for his accent back in 2003, when he argued forcefully in support of the US invasion of Iraq. But now that he has become more critical of that war, publicly embraced his Muslim identity in a Washington Post column, and become outspoken about Trumpism, he is being accused of promoting the “jihad rape of white women,” a claim so ridiculous that it is hard to believe anyone would put any stock in it. And yet the accusation continues to circulate online.

Then, in August, the New York Post ran an article claiming that Huma Abedin, an aide to Hillary Clinton, had connections to the Muslim Brotherhood because she worked as an assistant editor of a “sharia newspaper.” In fact, the newspaper in question was an academic journal on Muslim minority affairs, founded by Abedin’s father and now edited by her mother. The claim that Abedin had connections to the Brotherhood had no factual basis, but that did not stop Roger Stone, an advisor to Donald Trump, from calling Abedin a “Saudi asset.” Pause for a moment and consider what this term implies. Whatever Abedin’s religious views, the very fact that she identifies as a Muslim has made her, according to Stone, an agent for a foreign government and a traitor to her own country.

To be considered properly American, then, Muslims must serve their nation and remain silent. American Muslims have it much better in this country than anywhere else in the world, the logic goes, and therefore we ought to be quiet. If we become critical of establishment figures or dare to challenge political orthodoxies, our patriotism is disputed.

So rooted has the traitor/patriot dichotomy become that it can be used to attack non-Muslims as well. When Colin Kaepernick, the quarterback for the San Francisco 49ers, refused to stand for the national anthem as a protest against police brutality, rumors spread that he had converted to Islam. It did not seem to matter that Kaepernick identifies as a Christian or that he has Bible verses tattooed all over his body. The fact that his girlfriend is Muslim was sufficient to give weight to the rumors. Kaepernick’s refusal to stand for the flag could only mean that he was not really American, and thus he became Muslim.

None of this is new. For the last eight years, the conspiracy theory that Barack Obama was not born in the United States has fed on—and, in a vicious circle, been fed by—the claim that he is a secret Muslim. By linking Obama to Islam, the far right has found it easier to argue that he is weak on terror, that he has ties to the Weather Underground, or even, as Donald Trump recently claimed, that he founded ISIS.

Anti-Muslim sentiment is stronger in the United States today than it has been at any time in the last fifteen years, including immediately after the terrorist attacks of September 11, 2001. Many more Muslims are in the public eye than there were back then, however, not just in politics, but also in film and television, in arts and culture, in music and sports. This increased visibility is what is being challenged. So Peter King holds House hearings, Newt Gingrich proposes loyalty tests, Ted Cruz suggests monitoring our neighborhoods, and Donald Trump wins the Republican party’s nomination on a platform that includes a Muslim ban. The message to Muslims could not be clearer: We are guilty until proven innocent.

Conditional citizens are treated with fear and suspicion. We are expected to demonstrate our allegiance and offer blind support. But the true measure of patriotism is not silence or acquiescence; it is dissent and debate.