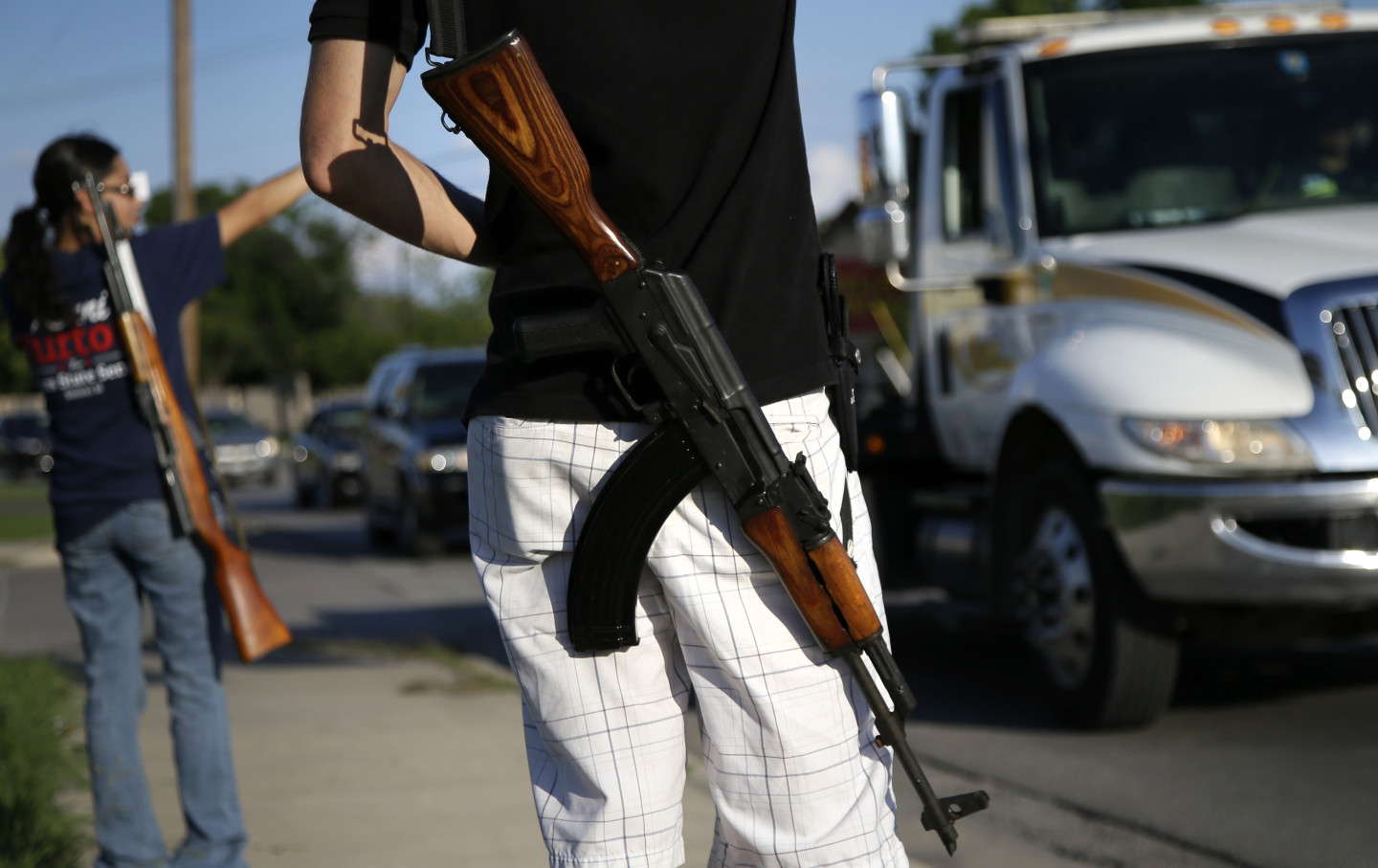 Kory Watkins, front, coordinator for Open Carry Tarrant County, along with others gather for a demonstration in Texas. (AP Photo / Tony Gutierrez)

There’s a lot we still don’t know about Friday’s tragedy at the Fort Lauderdale Airport. We know that this latest mass shooting is not about terrorism except in the way that the paranoid tenor of the time shapes the delusions of acutely vulnerable minds. We know this sad case is a tangle: The Iraq War, our shameful abandonment of the mentally ill, and political deadlock on gun laws are all somehow implicated—and at the same time all beside the point.

Because accused shooter Esteban Santiago served in Iraq, and his family reported he had changed on return, TV commentators rushed to conclude that he suffers from PTSD. PTSD doesn’t cause sufferers to hear voices commanding them to watch ISIS videos and enact murderous rampages. Santiago might have had prior psychotic episodes during (or even before) his service that went unrecognized. He might be in the midst of his first acute crisis. He also might have suffered from PTSD intertwined with other issues. But armchair diagnoses of traumatic stress serves only to stigmatize the legions of veterans who already face discrimination and too-often-inadequate care.

It is clear that Santiago received an unsatisfactory-performance discharge from the Alaska National Guard, and sought help in the Anchorage FBI field office for his deteriorating psychiatric condition. It is equally clear that the military has a scandalous track record of dumping mentally ill soldiers—whether suffering combat PTSD or some organic affliction—with less than honorable discharges. And a dishonorable discharge means that a troubled vet like Santiago would not easily have access to VA mental-health care—a crucial dimension missing in ill-informed instant commentary, even though some of the country’s finest investigative reporters (Dave Philipps of The New York Times, Daniel Zwerdling and Quil Lawrence of NPR, and Michael de Yoanna of Colorado Public Radio) have all reported in detail on the alarming cycle of military mental illness, bad-conduct discharges and post-discharge violence, drug abuse and homelessness.

From what we know thus far, the most consequential question raised by this shooting is simple: Could anything have kept a mentally ill man, who’d walked himself into the FBI seeking help against psychotic commands involving ISIS, from the fully legal possession and air transport of a weapon, checked into his luggage when he presented his one-way ticket to Fort Lauderdale?

The answer is yes—intertwined not with the rare risk of terrorism but the with the everyday threat of intimate-partner violence. Twelve months ago, according to Anchorage records, Santiago was arrested after he smashed his way through the door of his then-girlfriend’s apartment to choke and beat her. Prosecutors ultimately deferred the charges, today still pending in Anchorage court. That—even before his visit to the FBI months later—was a crucial missed opportunity.

As far back as the 1990s, public-health researchers and domestic-violence advocates began noticing a deadly nexus between domestic violence and gun possession. The statistics are irrefutable: As the Law Center to Prevent Gun Violence notes, more than two-thirds of spouse and ex-spouse homicide victims between 1980 and 2008 were killed with firearms, and in 2011, nearly two-thirds of American women murdered with guns were killed by their intimate partners. What’s more, there is a far stronger link between domestic-violence and mass shootings than any other cause, including politics or religious fundamentalism. According to Everytown for Gun Safety, 57 percent of mass shootings between January of 2009 and July of 2014 involved the killing of a family member or a current or former intimate partner of the shooter. That’s why in 1997, Congress passed a statute denying gun ownership rights to any individuals convicted of misdemeanor domestic assault or subject to domestic-violence restraining orders.

The problem—as Esteban Santiago’s case illustrates—is that this seemingly common-sense federal law simply doesn’t cover many cases, and fails in many others. The majority of domestic-violence complaints never result in a conviction. Thanks to years of NRA resistance, data collection and reporting by states is spotty. Domestic-violence perpetrators make it through the gun-show loophole. And while perpetrators may not be able to purchase new guns, the federal law includes no mechanism for confiscating weapons already in their possession.

For that reason, states are increasingly turning to a local remedy: gun-violence restraining orders. These laws don’t restrict gun ownership. But they do get guns out of the hands of people who are threats to themselves or others—domestic-violence perpetrators, suicidal individuals and the small number of violent mentally ill. California’s law, the most sweeping, passed last year; Connecticut has had a very effective gun-possession restraining order process on the books for a decade. These laws have a strong track record in reducing suicide and homicide; more than a dozen states are considering them. Even the NRA, which fought gun-violence restraining orders for years, has changed its posture, limiting its advocacy in California’s debate this year to pushing a bill allowing gun shops rather than police to hold confiscated weapons.

If Alaska had such a law on the books, Anchorage police would have taken away Santiago’s weapon in January of 2016, until his still-pending intimate-partner-violence charge was fully resolved. Or a few months later when he wandered into the FBI, the police could have held his gun under court order, instead of returning it after his psychiatric exam as seems to have happened. And if state-level restraining orders were combined with a working federal background-check system—if the national no-fly list and state-level no-gun lists were connected, transparent, and accountable—Esteban Santiago could not have boarded that Delta Airlines flight on his one-way ticket to Fort Lauderdale with weaponry legally checked in the baggage hold. It’s that simple.