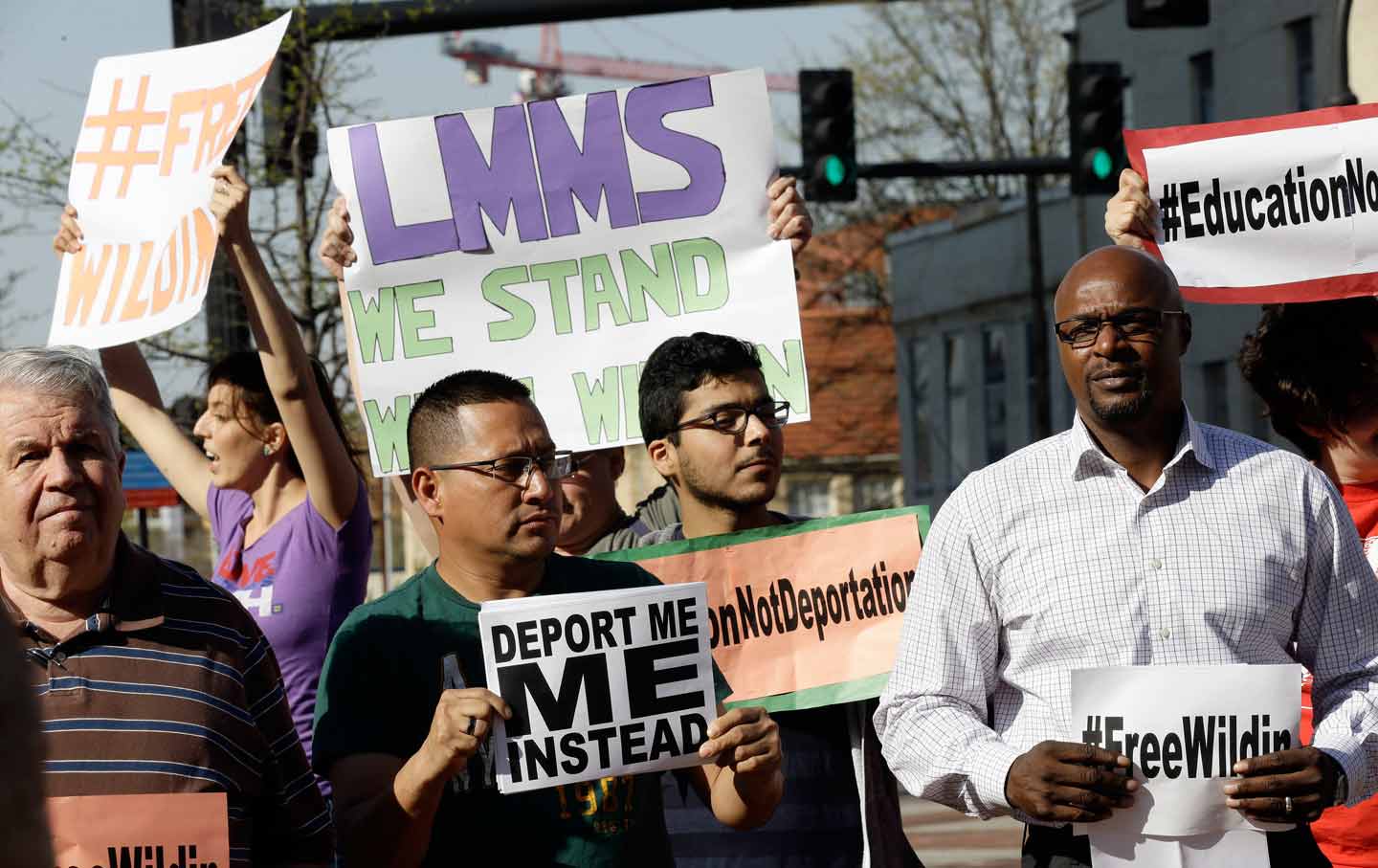 A few months ago, I learned the story of Wildin Acosta. I learned of how the 19-year-old Honduran refugee was detained by Immigration and Customs Enforcement (ICE) agents while on his way to his high school in Durham, North Carolina. I learned of how, although he was being detained at the Stewart Detention Center in Georgia, he was still so determined to graduate that he asked his teachers to send him homework. I learned that, because of the enormous outpouring of support he had received from his community, he had been granted a temporary stay from deportation.

This article appeared originally at Facing South, the online magazine of the Institute for Southern Studies.

But I understood the struggle was not yet over. So when I was given the opportunity to travel to Washington, DC, with a North Carolina delegation comprised of some of Acosta’s classmates, his teacher, and activists to meet with members of Congress and Department of Education and Homeland Security officials to demand the release of Acosta along with fellow North Carolina detainees Yefri Sorto-Hernandez, Pedro Arturo Salmeron, Alexander Josue Soriano-Cortez, Ingrid Portillo-Hernandez, and Bilmer Pujoy-Juarez, who were all being held at Stewart, I was glad to accept.

Collectively known as the NC6, they had all come to North Carolina from Central America during the immigration surge of 2014 to escape violence and persecution in their home countries. Because they were minors at the time, they were temporarily allowed to stay in the United States after being detained by US Customs and Border Protection. Simply because they are now over 18, they are once again targets for deportation.

I decided to stand with these youth as an organizational ally—I am an executive board member of the Youth & College Division of the NC NAACP—and as a person who believes it is morally wrong to deport them back to countries where their lives would be in imminent danger. The more I listened and learned during my meetings in Washington, the more clearly I understood that the problem was about more than the immoral deportation of youth.

I began to connect the deportation of the NC6 to the criminalization of black and brown youth, which is getting out of control, particularly in the South. The school-to-prison pipeline is real and devastating. In grades K-12, black public-school students are 3.8 times more likely to receive at least one suspension from school when compared to their white counterparts, according to the Department of Education’s Civil Rights Data Collection. Disparities exist even in preschool, where black children are 3.6 times more likely to be suspended than their white counterparts.

For undocumented youth, simply heading to school can put them in this pipeline, as happened to Acosta. Sorto was on his way to catch the bus to West Mecklenburg High in Charlotte when he was detained. Other undocumented youth have become so afraid after hearing the stories of these ICE arrests that they have dropped out of school, as did Salmeron of Charlotte, who ended up being detained anyway.

As the NC NAACP advocates for the NC6, we are also demanding the release from prison of two black men who we believe were also unjustly incarcerated as youth and have had years of their lives taken away by the prison-industrial complex.

In 1995, when then-19-year-old Dontae Sharpe was facing trial for the murder of George Radcliffe in Greenville, North Carolina, he was offered a plea deal that would have freed him with time served, but he refused to admit to the crime and maintained his innocence. Despite the fact that there is no physical evidence tying him to the murder and although an appellate court determined there were serious flaws in his case, Sharpe continues to sit in jail as Attorney General Roy Cooper defends his conviction.

In 1997, Kalvin Smith was sentenced to 26 years in prison for the beating of a woman inside the Silk Plant Forest store in Winston-Salem, North Carolina. Christopher Swecker, a former assistant FBI director hired by Cooper to review the case, concluded that “due to the flawed nature of the original investigation only a new trial that considers the full record and evidence not available, misrepresented, or omitted in the original trial will provide the full measure of justice the community of Winston-Salem and every accused defendant deserves.”

The Silk Plant Forest Truth Committee, an independent review board comprised of nine citizens with no ties to the original investigation, came to a similar conclusion. It released a resolution that said they “are aware of no credible evidence” that Smith was at the Silk Plant Forest store at the time that the crime was committed. Yet Smith still sits behind bars.

If Smith is released, it would be the third exoneration in Winston-Salem alone since 2004. If Sharpe is also released, he and Smith would join the list of men like Howard Dudley, another black man who was recently exonerated in North Carolina after spending 23 years in prison. In total, Smith and Sharpe have been incarcerated for 40 years. It has been too long for them, and it has been too long for the NC6. #BlackLivesMatter, #ImmigrantLivesMatter, and this criminalization must stop.

Amid all of this, House Bill 2—“the bathroom bill”—was recently passed in North Carolina under the pretense that it would “protect women and children.” Meanwhile, women and children are being targeted by ICE at the highest rates. It is undeniable that deporting these individuals puts them in immense danger—danger they came here to escape.

While our delegation was in DC, a government official told us that he disagrees with the immigrant-detention policies, but is limited in what he can do because of the law. Several times during our trip, we were told that what is truly needed is broad immigration reform.

I understand that we need broad immigration reform. But I also understand the urgency of now. Just last week, on the eve of what was supposed to be his high-school graduation, Acosta was placed in a solitary confinement—an act that Representative G.K. Butterfield, a North Carolina Democrat who recently visited Acosta, is concerned may be “retaliatory in nature.” The NC6 must not continue to waste away in a detention center while the Department of Homeland Security has the power to act. Likewise, men like Dontae Sharpe and Kalvin Smith should not have to waste away in prison while the attorney general has the power to act.

Further, we must not blame our inability to act on the restrictions of the law. Slavery was law, segregation was law, and House Bill 2 in North Carolina is law. What happens when the law is unjust? What happens when the law is immoral? We must stand up against this immoral criminalization of black and brown youth that snatches up the innocent and places them in prison.

I recall how our delegation ran into Representative John Lewis while on our way to a meeting. The Democrat who represents Georgia, where the NC6 is being held, was already familiar with their plight. He wished us luck in our efforts to free them and pledged his support.

To me, Lewis represents how far we have come as a nation, but also how far we have left to go. As a young civil-rights activist, he was nearly killed several times—as he participated in the Freedom Rides, marched across the Edmund Pettus Bridge, and took part in numerous sit-ins. Yet some of the same lawmakers who admire his civil-rights work turn around and pass laws that hurt the very people he fought to protect.

Still, Lewis seems hopeful and determined to fight. The road ahead may be long but, like the congressman, I am committed to the struggle. We cannot wait. As Lewis once said, “If not us then, who? If not now, then when?”