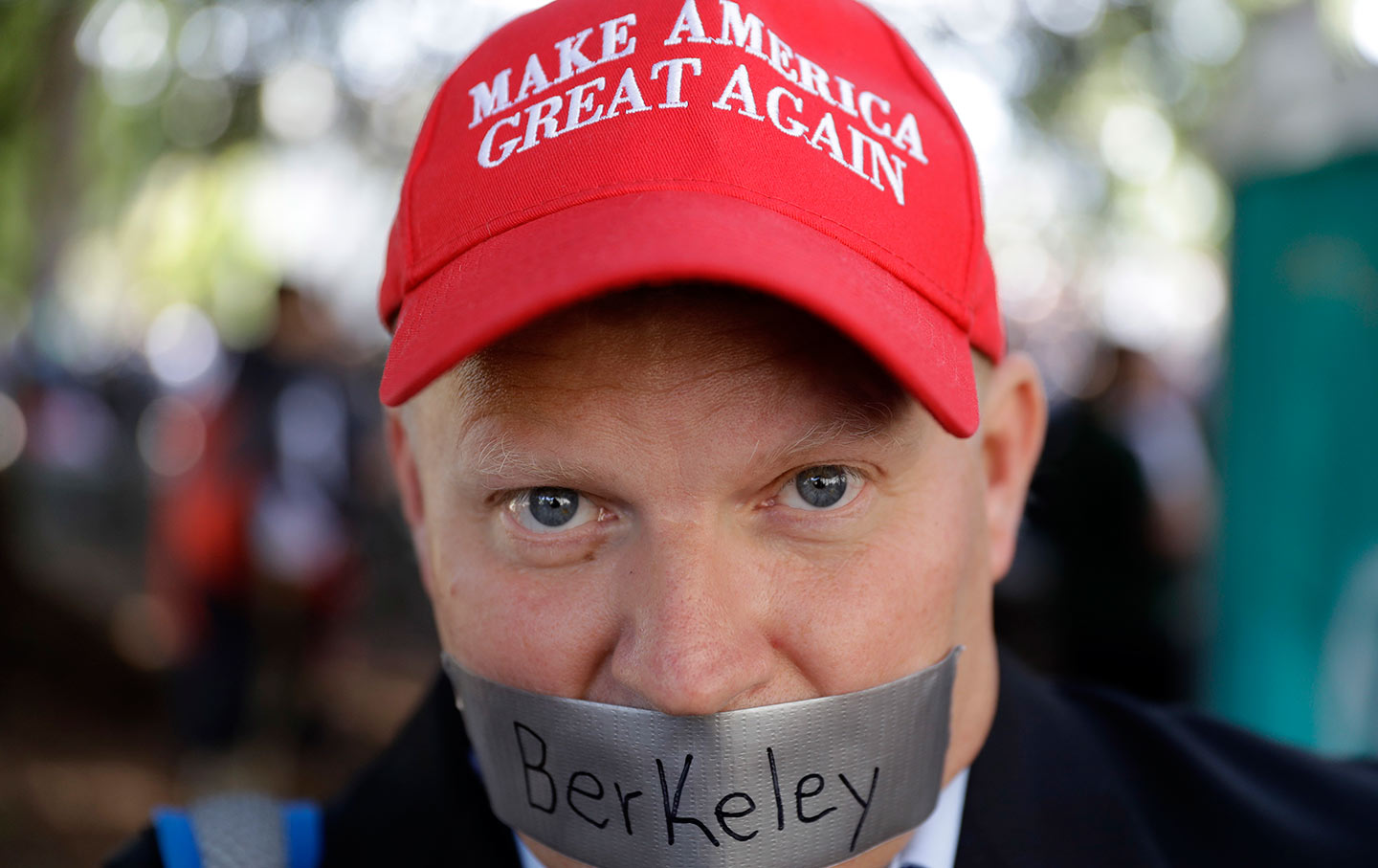 A protester at the University of California, Berkeley, after Ann Coulter canceled a speech in April 2017. (AP / Marcio Jose Sanchez)

As President Trump and his Republican quislings continue to undermine our democracy, the punditocracy obsesses over another apparent threat to the nation: liberal intolerance. When New Yorker editor David Remnick disinvited former Trump strategist Steve Bannon from his magazine’s annual festival, The Wall Street Journal ran an article bemoaning the “growing list of news organizations that have reversed their decision to engage with conservatives after a public outcry.” On The New York Times’ op-ed page, ex–Journal opinion editor Bret Stephens crossed into Crazytown when he concluded that “what this really means is that Remnick is no longer the editor of The New Yorker. Twitter is.” He added that the magazine was “on the road to [becoming a] left-wing version of Fox & Friends.”1

This controversy followed another media firestorm sparked by an apology published in The Nation for a poem that offended some readers. The poet, Anders Carlson-Wee, also expressed regret, explaining on Twitter that the negative reaction was “eye-opening.” But the first response was another rebuke: His apology, it seems, was ableist toward the visually impaired. In a front-page article in The New York Times Book Review, author Thomas Chatterton Williams asked: “How did we arrive at this fraught place where the use of nothing more sinister than a body metaphor can assume the power to cause harm?” The blame, he argued, belongs with “the country’s rapidly shifting mores, which are the product of new generations increasingly fluent in, in thrall to and in fear of the hyperspecialized language and norms of academia.”2

Now I don’t think The New Yorker should have invited Bannon, and I don’t think The Nation should have apologized for its poem. But in the case of the former, Remnick published an 829-word statement explaining why he’d changed his mind after listening to his staff, his readers, and other conference participants. And The Nation ran a lengthy letters section in which both the poem and the apology came in for criticism, including from columnists and contributors to this magazine.3

The Nation and The New Yorker may be the current marks, but the true target of these attacks is the liberal academy. Writing in The Spectator, Toby Young opined that “the real problem on college campuses is not the whiny, neurotic students, but the post-modern neo-Marxist professors who are manipulating them.” Fox News’s Tucker Carlson and the Manhattan Institute’s Heather Mac Donald agree that the ideology of the modern American university is “clearly literally destroying the country” (Carlson), driven as it is by the proposition that “whiteness is a source of all evil in the world [and] lethal to people of color,” and also by “a contempt for objectivity and truth seeking” and “a belief that all females exist in a state of oppression by rape culture” (Mac Donald). New York’s Andrew Sullivan worries that students who are brainwashed by “the imperatives of an identity-based ‘social justice’ movement’” will likely tip the “broader culture…away from liberal democracy as well.” In a previous column, I noted the obsession of writers and editors on the Times’ op-ed page with what columnist David Brooks once termed the “snowflake fragility and lynch mob irrationalism” of college students mixing “into one perfectly poisonous cocktail.”4

One person who is strangely sanguine about these phenomena, however, is Francis Fukuyama, the famed author of The End of History and the Last Man as well as a new book critical of identity politics. Fukuyama notes that “because specific incidents are picked up by conservative media and blown up to be representative of higher education,” his friends tell him that it is “obvious there is no freedom of speech left in universities.” He finds this “excessive.” After obnoxious students at Middlebury College shut down a speech by Charles Murray, Fukuyama hosted the discredited purveyor of racist pseudoscience at Stanford University. “We had a protest,” Fukuyama explained, “but he got to say what he wanted to say. People listened. Charles Murray told me he’s been speaking all over the country, and that the Middlebury incident, while a bad one, wasn’t representative of the way he’s been received on campuses.”5 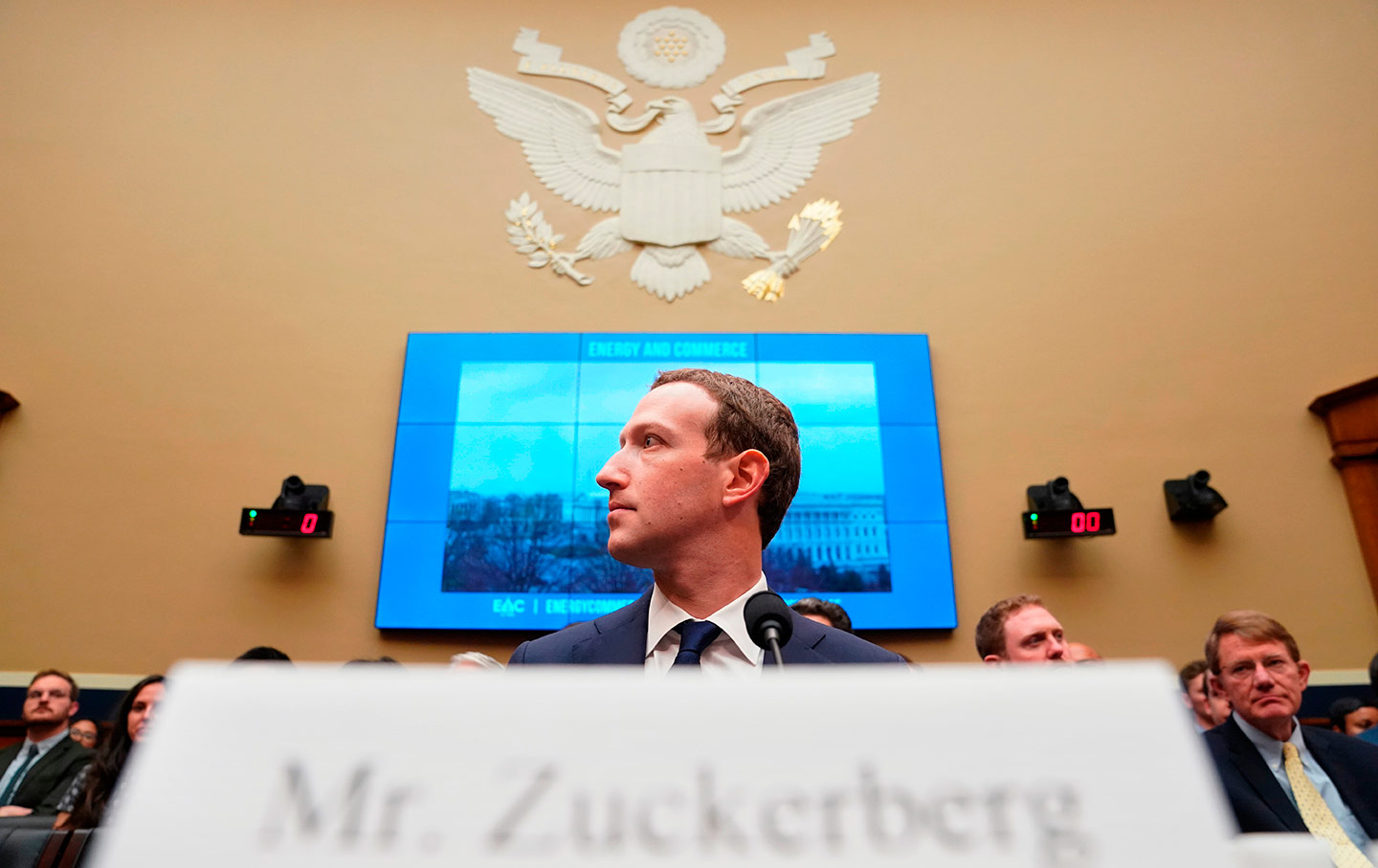 The Right Is Working the Ref Yet Again. This Time on Facebook—and It’s Working.

Lo and behold, Sanford Ungar, director of Georgetown University’s Free Speech Project, did some actual research and offers evidence that the most significant threats to free speech come not from campus liberals but, most frequently, from conservatives.6

In the much-publicized college cases, Ungar finds that the same publicity-seeking right-wingers—people like Ann Coulter, Ben Shapiro, and Milo Yiannopoulos—keep showing up on campus, often at events funded by the conservative group Turning Point USA, to “invite, and delight in, disruption.” While I wish these naive students would stop taking the bait, Ungar notes a number of far less well-known incidents in which faculty members have been disciplined, or even fired, for criticizing Trump. He also cites numerous examples in which state legislatures—largely led by conservatives—are seeking to shut down free speech. In Arizona, for instance, the Legislature passed a bill inviting public colleges to “restrict a student’s right to speak, including verbal speech, holding a sign or distributing fliers or other materials, in a public forum.” Meanwhile, a 2016 Knight Foundation survey demonstrated that today’s college students are actually less sympathetic to speech restrictions on campus than the general public—many of whose members, egged on by their president, would like to restrict the rights of Muslims to be heard.7

More to the point, there are 4,583 colleges and universities in the United States, but most pundits care only about the few dozen they went to or want their children (or grandchildren) to attend. Why are we not reading more about the Trump administration’s disastrous policies on college loans and the tremendous unpayable debt it is seeking to saddle students with? Isn’t that a little more dangerous to their future—and ours—than a neo-Marxist syllabus or two? 8