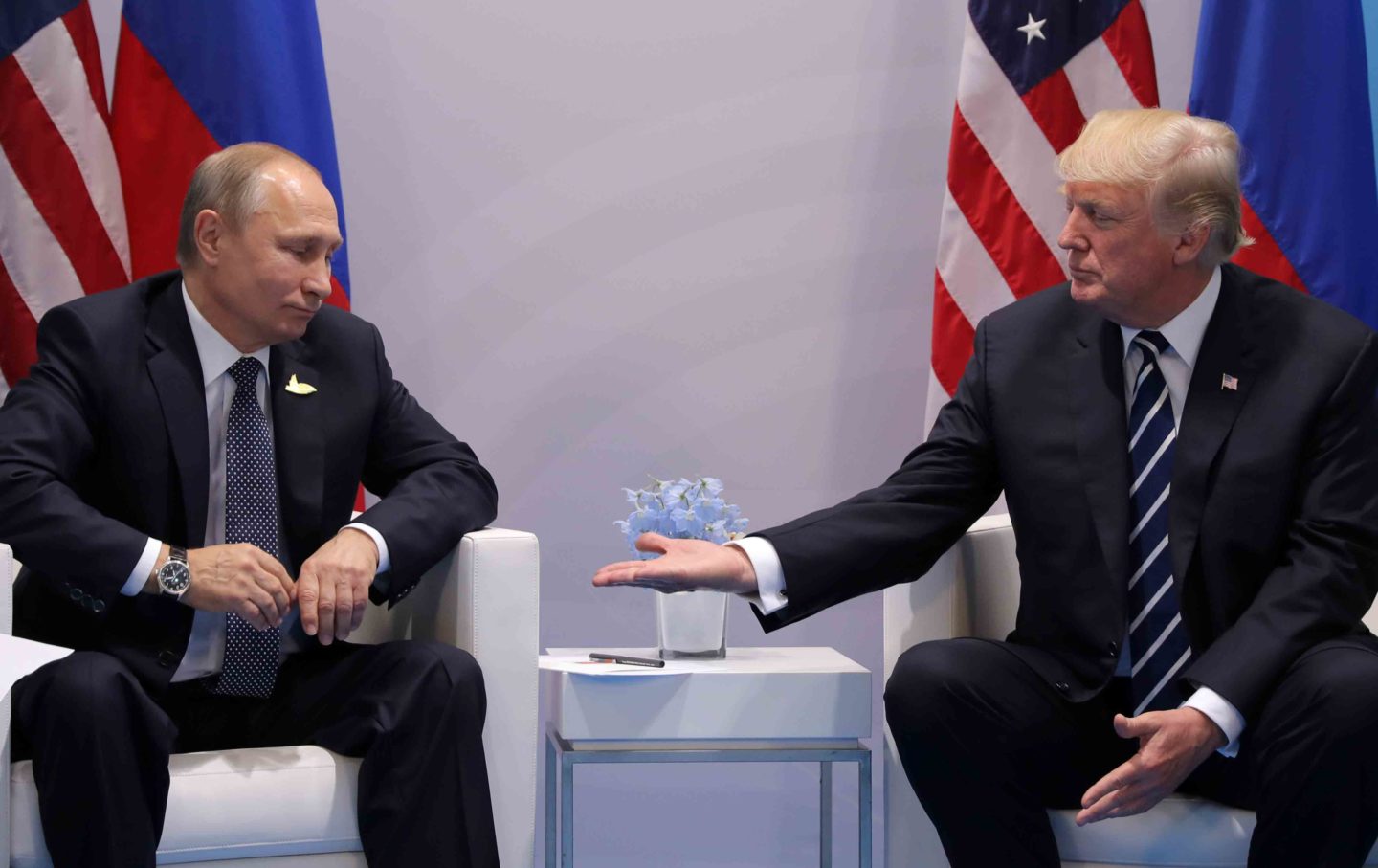 I admit, I fell for it: the Trump-Putin first-meeting hype. For days, reporters and pundits, myself included, have insisted that President Donald Trump had to confront Russian President Vladimir Putin about the finding by four US intelligence agencies that Putin “directed” a hacking assault on the Democratic Party intended to help Trump and damage Hillary Clinton last year. The confrontation at the G-20 summit was set up as a test of each leader’s manhood.

Of course, by the accounts of their courtiers, both emerged the bigger man. US diplomats claim Trump confronted Putin about Russian election meddling; their Russian counterparts admit it came up but claim both men agreed there’s no evidence it happened.

So, predictably, the meeting delivered nothing of substance. Trump lowered the stakes for it himself with a ridiculous tweet about the Russia hacking charges just hours before his first encounter with Putin:

Everyone here is talking about why John Podesta refused to give the DNC server to the FBI and the CIA. Disgraceful!

It was one of Trump’s more obvious, desperate lies. No one at the G-20 was talking about Podesta’s refusing to give the Democratic National Committee’s server to intelligence agencies, not least of all because it didn’t happen: Podesta ran Hillary Clinton’s campaign, not the DNC, though both saw their accounts hacked by actors “directed” by Putin, according to a January statement by those four US intelligence agencies.

Trump’s false Tweet showed the extent to which he’s shut out the details of Russian meddling in the 2016 election: he can’t keep the targets straight. (You could argue Trump’s confusion was deliberate, but that requires ignoring what we know about the incurious, under-informed president.) The tweet also showed the extent to which he’s still rattled by the charge of Putin’s interference, because it casts more doubt on his legitimacy as president, given that he lost the popular vote by 3 million. Summoning the ghost of John Podesta to ward off claims that he owes his presidency to Putin was a typical Trump distraction ploy.

On Thursday, Trump had again expressed doubt that Russia was the culprit, with his trademark mangled syntax, first saying he believed the evidence, and then backtracking:

So, essentially, it didn’t matter what Trump and Putin discussed on Friday in Hamburg, Germany; we know that Trump dismisses evidence of Putin’s involvement in the hacking scandal, whatever the official “readout” of their meeting.

That readout was predictably mixed. There were ooohs and ahhhs that it went two hours and 20 minutes, when it was scheduled for a half hour. That was silly; Putin’s first meeting with President Obama went more than three hours.

Separate reports from the minions of both leaders overlapped a lot, but each side held up their man as the toughest. Secretary of State Rex Tillerson claimed that Trump did indeed confront Putin about Russian hacking, which Putin denied. Russian Foreign Minister Sergey Lavrov told a slightly different story: He said Trump wholly accepted Putin’s denial, because, according to the Twitter report of New York Times Moscow bureau chief Neil MacFarquhar, “over the many months that these accusations have been made, not a single fact has been presented.” That sounds like Trump, on Twitter and elsewhere. He continuously insists there’s no evidence of Russian hacking.

There were other details to glean from the encounter. Before the readout, US officials leaked news of yet another Syrian cease-fire agreement, which Tillerson had telegraphed earlier in the week. There have already been four failed cease-fire attempts. Apparently, they failed to discuss North Korea’s launch this week of a missile it claimed could reach the United States, which is lamentable since Russia just blocked a UN resolution condemning it.

There was a bit to interpret in the two men’s body language in their first encounters, if you believe in that sort of thing, which I do—or at least, I enjoy it. They shook hands awkwardly at first, but quickly warmed up. Trump then stood for a few moments rubbing Putin’s back solicitously, almost like a spouse. Later they held a brief photo-op before their official “bilateral” session, accompanied by only Tillerson and Lavrov (plus two translators), an intimate group chosen by Trump, according to The New York Times, to prevent leaks and “competing accounts” of their conversation. Significantly, Trump deliberately left out National Security Adviser H.R. McMaster and NSC official Fiona Hill, who have been tougher on Russia. Trump pronounced it “an honor” to meet with Putin; Putin replied that he was “delighted” and looked forward to “positive things” coming from their meeting. One man looked in charge, and that was Putin.

You can be skeptical about the evidence of Russian hacking, as well as whether it had any impact on the presidential election, and still lament that Trump is the American leader facing off against Putin on the world stage. You can believe that the highest US priority is easing US-Russia tensions and averting Cold War II (or World War III), and still acknowledge that while this accidental president may try to do that, he could also provoke apocalyptic conflict elsewhere with his bluster and penchant to blunder. In the end, we know no more about US-Russian relations, or Putin’s responsibility for the hack of Democratic Party campaign accounts, than we did yesterday. My only comfort in taking the whole show seriously: I did, so you don’t have to.

Editor’s Note: An earlier version of this article misstated the number of US intelligence agencies that have concluded that Vladimir Putin directed the hack on the Democratic Party, intending to help Trump and damage Clinton. That number is four, not seventeen. The text has been corrected.