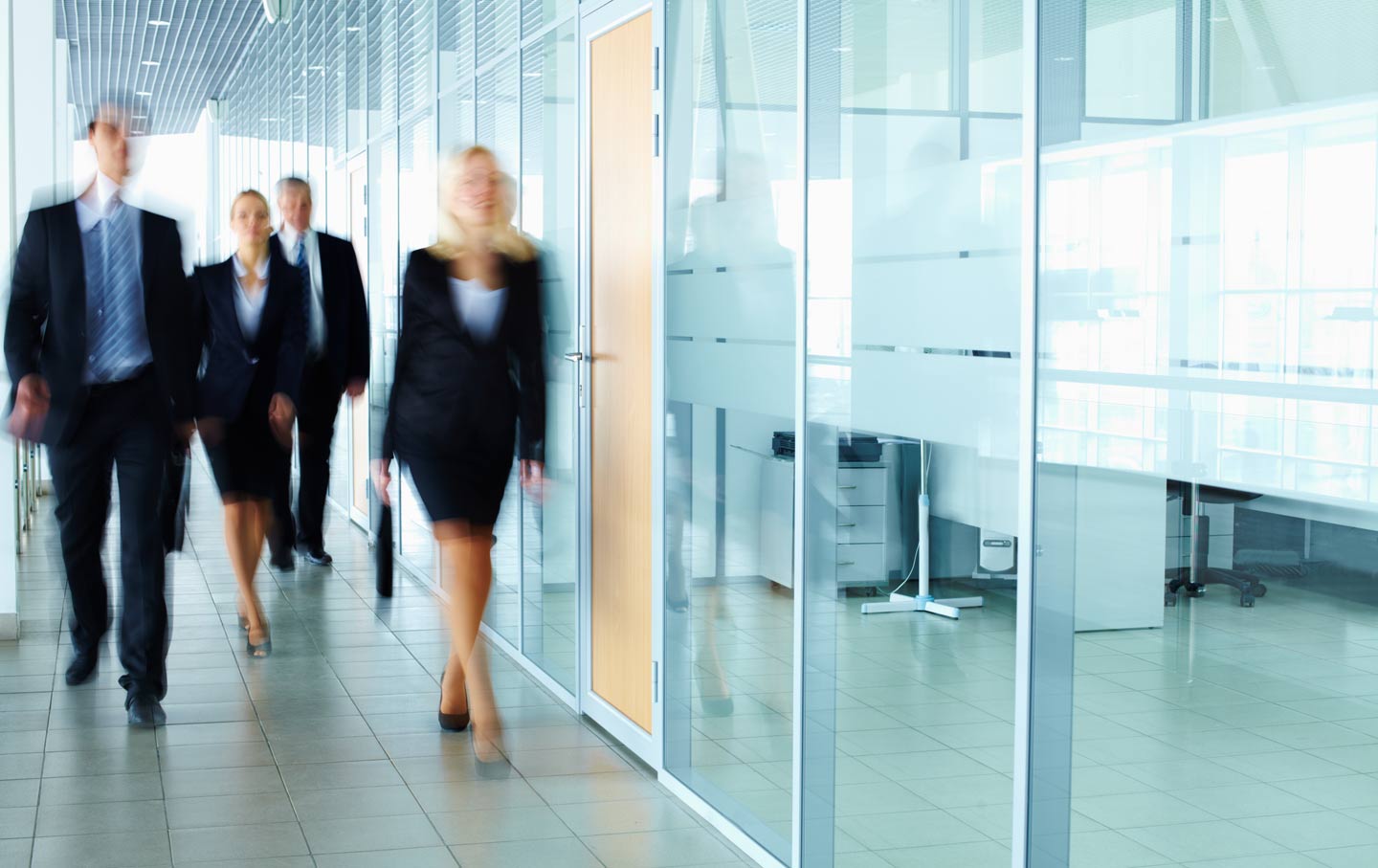 In the days since one of the country’s most powerful PR firms on the left disintegrated amid allegations that its founder, Trevor FitzGibbon, had sexually harassed and assaulted employees and clients alike, many progressives have been scratching their heads and looking inward. How could someone so enmeshed in the movement—whose clients included the AFL-CIO and MoveOn, and even feminist groups NARAL Pro-choice and UltraViolet—himself be such a sexist abuser, as many women are now claiming?

But the news shouldn’t be surprising, even at a progressive organization. It’s only the latest sign that, while it’s technically illegal, sexual harassment still permeates the workplace—regardless of its ideology.

The Civil Rights Act, passed in 1964, laid the groundwork for outlawing sexual harassment, and the Equal Employment Opportunity Commission, the nation’s watchdog for people’s workplace rights, incorporated protection from sexual harassment into its regulations in 1980, making it officially illegal. Most Americans only became acquainted with the fact that harassment is against the law when Anita Hill testified against Clarence Thomas’s nomination to the Supreme Court in 1991. Still, it’s been the law of the land for decades.

Sexual Harassment Is Not a Disease, But It Surely Is an Epidemic

Yet, even now, women are regularly victimized by harassers at work. One recent survey of several thousand women by Cosmopolitan magazine found that a third had been sexually harassed at work at some point in their careers. Other polls regularly uncover similar figures; one from 2011 found that a quarter of women had experienced workplace sexual harassment, while another from 2013 found that one in five women had been harassed by a superior and a quarter had been harassed by a coworker.

Even so, most women don’t come forward the way those at FitzGibbon did. In the Cosmo survey, nearly three-quarters of the women who had been harassed didn’t report it. The 2013 survey similarly found that more than two-thirds said nothing.

That’s very likely because they know the kinds of costs they could incur and the forces they’d be up against. The price can be both direct and indirect. Bringing a lawsuit often requires shelling out money for a lawyer, money you won’t necessarily recoup if things don’t fall in your favor. But even before that step, there’s the potential professional cost of lobbing an accusation at someone in your field—someone you might rely on for employment and a paycheck, or even just a good reputation in your industry.

The women—and men—of FitzGibbon Media have definitely learned this, if they didn’t already know the risks. The firm no longer exists because FitzGibbon himself pulled the plug. And while there is talk of opening a new firm without him and helping the staff all get jobs, it shows how real the threat to a career can be.

Even those who weren’t directly employed by FitzGibbon knew there was probably a cost to outing his behavior. As one anonymous woman who had worked with him on the client side told Vox’s Emily Crockett, “The progressive political world and media world is so small and interconnected, and he has been an influential part of that.… I don’t want to shoot myself in the foot if I need a good word later on down the line.” Countless women have been stuck in that very position, knowing they will likely someday need something from a man who is currently harassing them.

And even when women do screw up their courage and come forward, they often don’t get to claim victory. There were close to 7,000 sexual harassment claims filed with the EEOC last year, nearly half of which ended in a finding of no reasonable cause—meaning the people making the claims got nothing. And the number of cases that actually make it to that stage may be shrinking. In 2013, the Supreme Court significantly narrowed the rules surrounding who can claim and prove sexual harassment, with dozens of cases since tossed aside on those new grounds. Why go to all the trouble only to lose in court?

Women have a hard time proving their claims even within their own companies. Last week was not the first time FitzGibbon was hit with allegations. When he worked at his previous job at Fenton Communications, multiple female colleagues accused him of sexual harassment, according to the Huffington Post’s reporting. While Fenton has said it immediately investigated the claims and even disciplined him, he wasn’t fired, only monitored. And then he left to launch his own firm.

With few repercussions for continuing abusive behavior, known harassers move freely through the workplaces, even progressive ones.

This kind of response—an investigation, a rap on the knuckles, and a promise to keep an eye on the problem while allowing an abuser to keep his position, build his success and continue working alongside those who accused him—has one outcome. It emboldens the abuser, and it silences the abused. It’s also fairly common. Companies don’t have to get lawyers involved and risk any legal fallout. They don’t have to hire a new senior employee. Everything gets swept under the rug.

Except that it has huge ripple effects. It’s part of the reason sexual predators lurk just as often in progressive spaces as conservative ones. With few repercussions for continuing abusive behavior, even from many avowed feminists, known harassers move freely, and even those who know the allegations still decide to work with them.

FitzGibbon Media is unique in just one way: the employees banded together and decided to speak out. They did so at great personal risk and cost. It’s those risks and costs that makes it so likely that plenty of other abusers and harassers are happily employed in self-proclaimed progressive institutions.