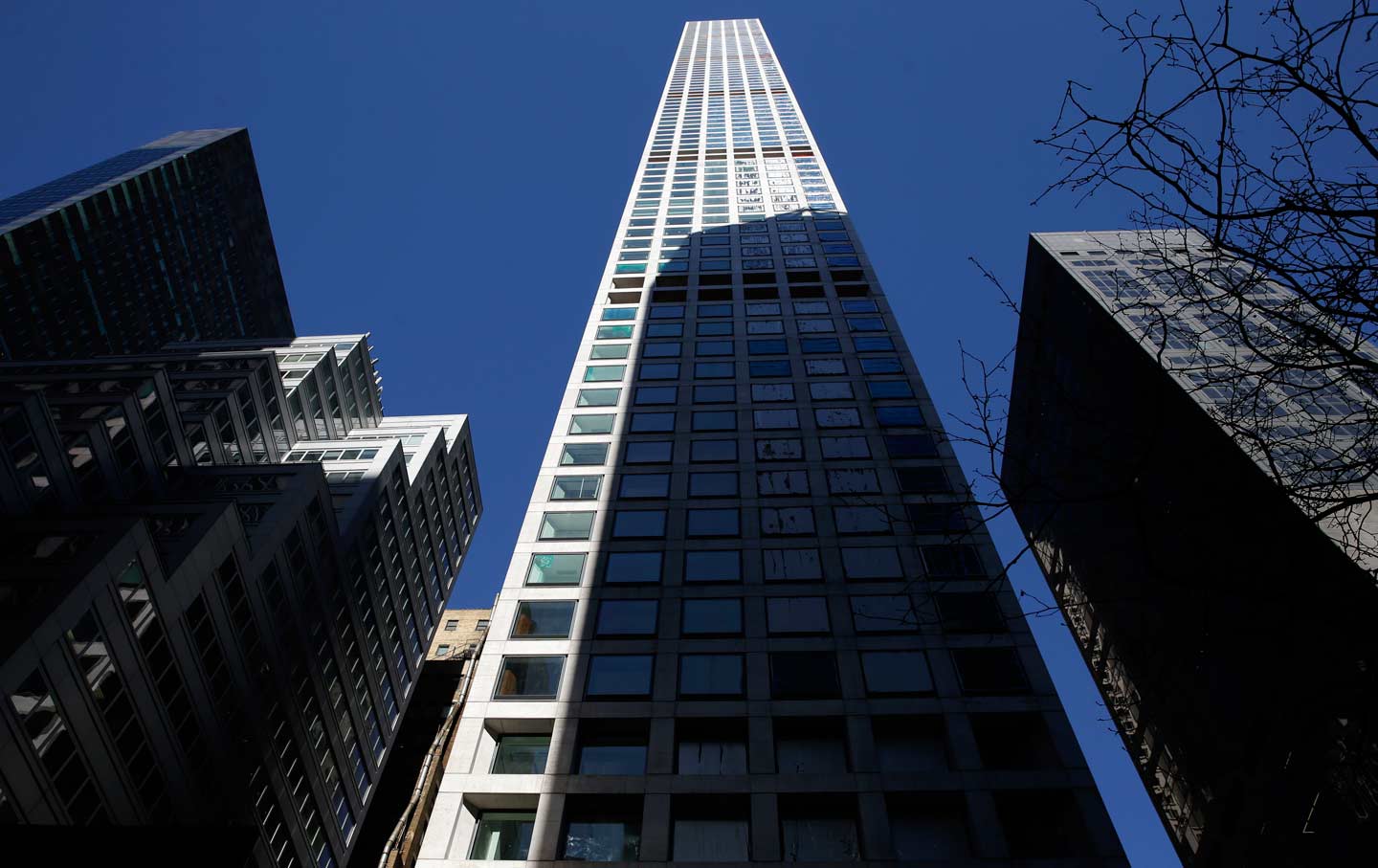 In the spring of 2013, the architect Rafael Viñoly shared an instructive insight into the state of New York real estate with a reporter for The New York Times. “There are only two markets,” he observed, “ultraluxury and subsidized housing.”

As the design force behind 432 Park Avenue, a waifish super-tower rising from New York’s “Billionaire’s Row,” Viñoly spoke from a position authority, at least about the “ultraluxury” side of the market. Stretching 96 stories, 432 Park is an obelisk of wealth—the tallest residential tower in New York City (in the whole Western Hemisphere, in fact) and also one of its most expensive. To its admirers, who include the Saudi retail baron who agreed to pay $95 million for its penthouse, it is a luxury investment with killer views. To its detractors, however, it is a soaring middle finger, raised in mockery at the millions of struggling New Yorkers for whom affordable rents remain as notional as, well, a crash pad in the sky.

New York has long been an expensive town, a place where complaining about the rent is as much a defining cultural trait as dropped Rs and jaywalking. But over the past decade and a half, New York’s housing costs have skyrocketed, giving rise to one of the most acute affordable housing crises in the country. Currently, roughly one out of three New York renters pays more than half of their income toward rent. And in 2014, Brooklyn, long famous as borough of working-class families and immigrants, was ranked the least affordable housing market in the country, with Manhattan trailing close behind. On any given night, nearly 60,000 homeless people, many of whom work low-wage jobs by day, sleep in municipal shelters.

Roughly one out of three New York renters pays more than half of their income toward rent.

Worsening income inequality is a primary culprit. But decades of cutbacks in federal housing programs also deserve blame, as do the weakening of rent regulation by the state government in Albany and a real estate industry that is the single biggest contributor to state and local politicians. The fact that, until 2014, the city had been governed for 20 years by mayors who cared more about cultivating the creative class than looking out for the city’s poorest residents also played a role.

But on March 14, New Yorkers received a rare piece of good housing news. The city’s mayor, Bill de Blasio, and its City Council reached a landmark agreement to require, for the first time ever, that developers create affordable housing in areas of the city that are rezoned for more residential development. Known as “Mandatory Inclusionary Housing,” these new requirements are the most far-reaching of any developed in the country to date. And while they will not solve all New York’s housing woes—they do not, for instance, touch the needs of the poorest 20 percent of New Yorkers—they will, nonetheless, mean that when the city creates more value by permitting the construction of new or taller buildings, communities share in some of that value rather than watching it all go to real estate developers.

The inclusionary zoning agreement is the hard-won result of a process that began nearly three years ago, when de Blasio was running as the insurgent progressive in the New York City mayor’s race. Alarmed by the widening chasm between the city’s ultrarich and forgotten poor, de Blasio vowed to push a plan that would help restitch the city’s affordable-housing fabric. Four months after he took office, he followed through by unveiling “Housing New York,” an ambitious $41 billion plan to “build or preserve” almost 200,000 affordable housing units over the next 10 years. Alongside tools to protect renters and encourage affordable development, the plan included a call to require developers building in upzoned neighborhoods to set aside a portion of the units for low- and medium-income residents.

Inclusionary zoning is not a radical intervention; it’s an incremental process, designed to chip affordability from market-driven ventures. Within these limits, de Blasio’s original plan was progressive, eking out more for low- and middle-income New Yorkers than other plans in other cities. Nonetheless, many housing advocates feared, not without reason, that the plan did not go far enough—that it did not offer deep enough affordability or sufficient numbers of units to address the growing needs of the poorest New Yorkers. Some even worried that the plan could inadvertently accelerate gentrification by offering incentives to developers to move aggressively into low-income neighborhoods—and they unfavorably compared it to former Mayor Michael Bloomberg’s developer-friendly “New Housing Marketplace” plan, which allocated only a small share of city-subsidized housing units to poor households. In a sign of widespread discontent, community boards across the city refused to approve it.

It is not easy to turn the phrase “inclusionary zoning” into a rallying cry for urgent action, but, under the aegis of the Real Affordability for All coalition (RAFA), housing advocates, neighborhood activists, and labor organizers mobilized New Yorkers from across the boroughs to push hard against the limits of the mayor’s plan. They took to the streets, protested, rallied, nudged City Council members, wrangled allies. And earlier this week, the mayor and City Council reached an agreement after Council members, at the urging of RAFA and others, revised and improved the rules to ensure that more affordable apartments are created for lower-income renters. Under the revised version, developers will have to set aside 20 to 30 percent of new housing units for lower-income tenants, in some cases families with annual incomes around $31,000. In addition, the de Blasio administration agreed to conduct a study examining how the city can create even lower-rent apartments for poor New Yorkers and incorporate union labor standards—a significant concession to RAFA, which pushed for the study and will be helping develop it.

The new agreements are a victory for advocates and organizers, and represent a significant step forward in making de Blasio’s housing plan more progressive. But they also represent a notable contrast to events unfolding in Albany, where Governor Andrew Cuomo, whose hostility to de Blasio is legendary, has concocted a serious roadblock to the mayor’s affordable housing program.

Earlier this year, reports leaked that Cuomo plans to reduce the number of state-administered federal tax-exempt bonds that are normally awarded to New York City to finance the development of affordable housing. The city had expected to receive up to $900 million in federal bonds, which are critical to its plans to build and renovate low-rent housing, and which also help leverage other resources, like federal tax credits. Now Cuomo wants to take some of those resources to finance his own, still-on-the-drawing board housing plan, which he announced in the vaguest of ways back in January.

The new agreements are a victory for advocates and organizers and a significant step in making de Blasio’s housing plan more progressive.

Making matters worse, Cuomo has also proposed new rules that would require a state board’s approval of the use of such bonds for every city-assisted housing project going forward—a layer of unnecessary red tape that will, at a minimum, slow the creation of desperately needed housing, and at worst may actually halt some projects altogether. Indeed, the governor’s new approval hurdle runs in direct contrast to recommendations in the mayor’s housing plan, which emphasize the importance of “eliminat[ing] inefficient regulations and reduc[ing] delays and redundancies in regulatory and permitting processes” in hastening affordable-housing development.

Already, opposition to Cuomo’s latest scheme is growing, and from some unexpected quarters. Residential developers and banks that finance affordable housing, as well as advocates and state and local legislators, have spoken out forcefully against Cuomo’s bond grab and the proposed bureaucratic roadblocks. At a City Council hearing earlier this month, Brad Lander, a representative from Brooklyn and cofounder of the Council’s Progressive Caucus, criticized Cuomo’s proposals as an “assault” on the city’s affordable housing: “It would be catastrophic for our ability to produce and preserve affordable housing if those state poison pills go through.”

Cuomo’s critics are right. New York City’s long-neglected and worsening housing crisis is too important to get caught up in the governor’s obsession with trying to hobble the mayor’s agenda. The governor needs to ensure that promised federal resources go to New York City, without bureaucratic interference. Cuomo can also help address the city’s housing crisis by working with the State Legislature to strengthen rent regulations that were weakened in the past, and that could help slow the loss of affordable homes.

New York’s housing market hovers at the edge of a very tall cliff—or, perhaps more accurately, the ledge of a very tall skyscraper. The mandatory inclusionary zoning agreement is an important first effort, but far more needs to be done—by the federal government, the state, and even, yes, the de Blasio administration—to yank the city back from the precipice. The city’s poorest residents, the 20 percent living below the poverty level, desperately need housing, and there is a real opportunity for an ambitious administration to dip into its budget to build new homes for its neediest constituents. Indeed, advocates hope that the mayor will be more aggressive about using city subsidies for just this purpose, while community groups in low-income areas slated for rezonings, like the South Bronx and East Harlem, remain eager for city officials to lock in ways to avoid displacement. As they press their case, de Blasio should continue to work with them to make sure that his promising housing plan serves the most vulnerable New Yorkers.

As for the future denizens of 432 Park Avenue, they can have their views. The real life of New York has always taken place in the streets.