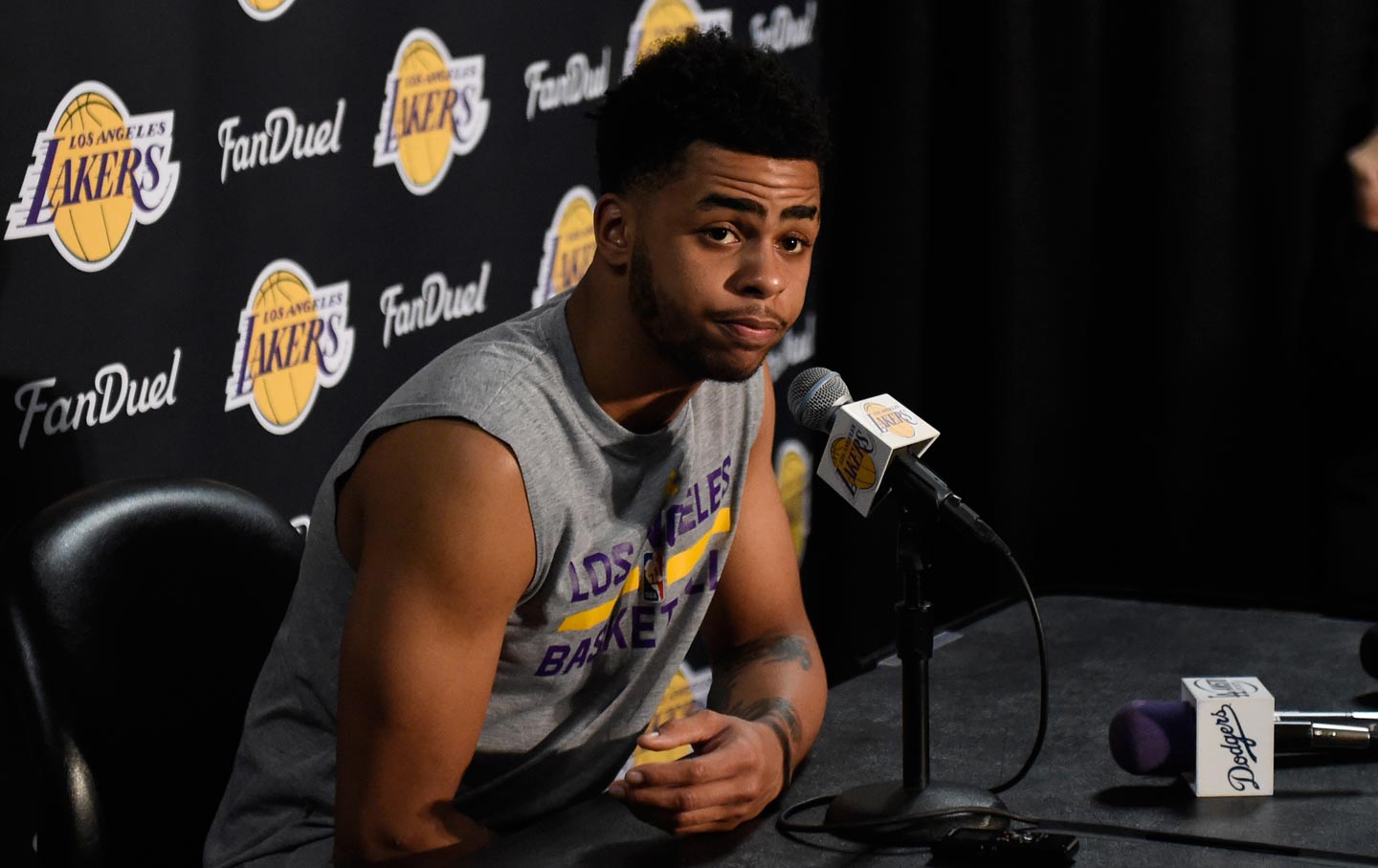 The 2016 version of the Los Angeles Lakers organization has already proven that it lacks any passion for winning, developing young talent, or being anything more than a traveling circus: a Washington Generals–esque vessel for Kobe Bryant’s LA County–sized ego. But now, despite the team’s 16-59 record, we have finally found something that stirs their hearts, unites them with purpose, and makes them care: “The Bro Code.”

With fewer than 10 games left in the season, talented 20-year-old rookie D’Angelo Russell is being shunned like Hester Prynne—literally shunned—because he videoed 30-year-old teammate, and self-described mentor, Nick “Swaggy P” Young talking about his hook-up with a 19-year-old woman at a club. Young, an absurdly unserious facsimile of a pro basketball player, is engaged to the absurdly unserious facsimile of a hip-hop artist Iggy Azalea. If Kobe Bryant is this team’s unsmiling Il Duce, Swaggy & Iggy are their prom king and homecoming queen. Young was also accused of sexual harassment last month—along with another very promising young player, Jordan Clarkson, whom one assumes Swaggy was also mentoring—and few in the team or in the media seemed to notice or care. This is the odiously infantile carnival that’s been tasked with developing D’Angelo Russell.

Over the last 48 hours, Russell has apologized endlessly, saying he has no idea how the video leaked. He deserves to be criticized, and even confronted. No one should be videoed without their consent. But he’s also 18 months out of high school and the pile-on against him—the absolute flaying of young Mr. Russell—has been both hyperbolic and inane. People old enough to know better should also be true mentors enough to give him a damn break. Instead, this kid who isn’t even old enough to order a drink in a bar, is basically being told that his very future in the league is in doubt.

ESPN’s Stephen A. Smith—the same Stephen A. Smith who was suspended from ESPN for blaming battered women for “provoking” male violence—said the following (This is in caps because Stephen A Smith is always yelling): “as a man, you don’t do that. under no circumstances, do you infiltrate yourself in somebody else’s business and discuss or reveal their private personal affairs. particularly when it comes to women, you turn the other way. you didn’t see, you saw no evil, you heard no evil, you know no evil. shut the hell up, mind your own business, step off and move on.”

The coup de grâce was Smith’s justifying the Lakers’ freezing out Russell by saying, “I am a reporter, and even I don’t want to talk to him.”

This is all such unadulterated horseshit. A 20-year-old prodigy is now an expendable pariah, while Stephen A Smith gets to pass judgement not only on his behavior but whether he should even be given a second chance to win people’s trust.

Smith is not alone. He’s just the loudest voice in a public shaming that feels like it exceeds any case of sexual assault or violence against women that the sports world has produced. Peyton Manning must be somewhere wiping his ample forehead saying, “Maybe I spent years trying to destroy a woman’s life for accusing me of sexual harassment, but thank God I didn’t break the Bro-Code!”

In other words, Smith is hardly alone in his condemnation. He’s just the loudest voice in the chorus. Bill Plaschke of the Los Angeles Times called Russell “immature,” saying, “You can’t pass Russell the torch; he will set something on fire, which is pretty much what happened with this recent video that appeared on a celebrity gossip site.”

Then there was Stephen Jackson live on SportsCenter saying, “Snitches get stitches.”

This isn’t analysis. It’s codified, well-compensated misogyny. It’s all so distressing, and not because I’m worried about Swaggy and Iggy’s future as a Celebrity Rehab couple.

D’Angelo Russell deserves so much better than this: the chance to actually grow up on a franchise run by adults, and that’s really the bottom line. I find it difficult to separate Russell’s giggling video and the enraged reaction to its release from this traveling dumpster fire of feces that has masqueraded throughout the 2015–16 season as the Los Angeles Lakers.

I’m old enough to remember when the Lakers were the coolest and best-run organization in sports. Magic and Kareem on the court. Pat Riley’s slicked-back intensity on the bench. “The Logo” Jerry West making decisions in the front office. And an owner, Dr. Jerry Buss, smart enough to sign the checks, have fun, and stay the hell out of the way. They played. They partied. But they were all about those rings. The Lakers made it seem like there was was nothing so fresh as winning. The parties, the glamor the fame, that was just the spoils of being the best.

I don’t know what this collection 2016 wearing purple and gold happens to be, but they shouldn’t be allowed to call themselves the Lakers. This tedious season-long goodbye tour to Kobe Bryant’s ability to shoot 4-19 has been difficult enough to stomach. But all of this latest has taken this farce of a season and turned it into something far more toxic.

If Russell—who, again, has apologized endlessly since the video surfaced—has acted immaturely, that’s just the environment where he goes to work every day. The Lakers had better not be so far gone, so irredeemably stupid that they are actually talking about trading D’Angelo Russell. They should instead release almost every other player in that locker room and thank Russell that he didn’t quit the team six months ago to join a real circus.