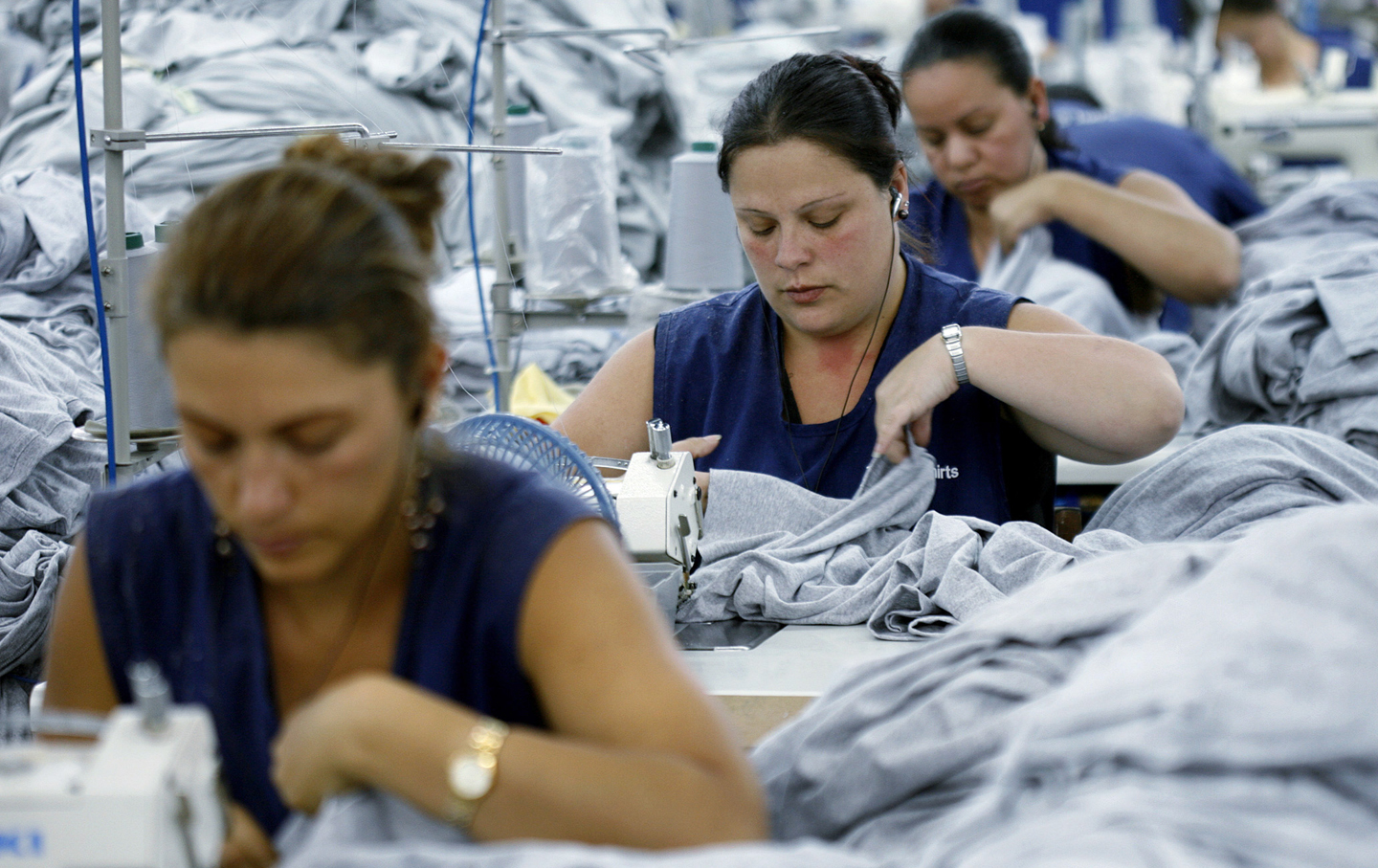 Los Angeles just set the course to boost its minimum wage to $15 per hour by 2020. But workers in the city’s garment factories will be lucky if they get paid anything at all.

The city’s mostly Latina garment workforce has long toiled outside the law, with workdays lasting sometimes 10 hours, for as little as four cents per garment—an old-fashioned piece rate that makes it easy for bosses to scrimp on wages. A report by the Garment Workers Center (GWC) of Los Angeles showed that 62 percent of garment workers reported being cheated out of overtime hours because of the piece rate. And 58 percent reported suffering wage theft. Among workers seeking assistance from GWC, average wages were only about $5 per hour.

Factory work grinds their health as well. Many reported being denied needed rest breaks. And the work is viciously exhausting: Roughly half said their factories were poorly ventilated, leaving them vulnerable to heat-related illnesses and exhaustion as they inhale airborne dust and lint. In addition to acute eye and respiratory irritation, other reported problems included widespread lack of safety training and on-site first-aid resources, and sexual harassment. About a third of workers surveyed reported “not having clear access to emergency exits.”

These harsh conditions contrast sharply with the public image of the garment sector, long considered an island of success in a US garment industry devastated by global competition. Though the workforce in LA County has declined from about 80,000 in 2001 to just around 44,000 in 2014, the city serves as a specialized manufacturing hub for designer brands.

Some manufacturers say they fear rising local wages would undermine the LA fashion industry’s “competitive” position, and that factories might relocate in the wake of the minimum-wage hike.

But the $15 minimum-wage floor will make it easier for factory workers’ families to survive LA’s crushing cost of living. According to the Economic Roundtable, the wage raise would affect more than 53,000 light manufacturing workers in the food, garment, and chemical industries. Yet the researchers estimated that raising the wage to $15 would only require “reallocating 4 percent of overall industry revenue”—which suggests that employers’ grumbling about capital flight are little more than empty threats.

But the sad truth is that abysmal labor conditions are actually a draw for manufacturers, and that’s why the new minimum wage itself may amount to a mere gesture for garment workers. A study on wage violations in Southern California found that more than a third of cases since 2009 came from the garment industry, resulting in about 12,000 workers’ winning over $15 million in back wages. That’s not just an issue of poor enforcement: The entire business model is built on flouting labor standards.

Although we periodically hear about “sweatshops” in some dilapidated compound in Bangladesh, some factories on US soil still operate in the same mold as the famously doomed Triangle Shirtwaist factory, which helped spark the industrial union movement a century ago. Today, everywhere, clothes are still sewn by women stuffed into hazard-prone buildings, chronically overstressed and underpaid, perhaps heading blindly toward another deadly industrial accident.

The safety and health of garment workers became a major focus of industrial- and trade-policy debates with the Rana Plaza factory collapse in 2013, which left more than 1,100 dead. That concern, GWC argues, should be extended to the plight of garment workers on US soil.

“We really put Los Angeles in conversation with places like Bangladesh, with the Triangle Shirtwaist [factory] back in the day,” says GWC organizing coordinator Mar Martinez. In this globalized labor structure, “in order to pay really low prices for the clothes they’re making, [businesses] are not only paying garment workers so little, but they’re cutting corners in health and safety everywhere.”

In another sad parallel, Bangladesh has also recently dramatically raised its minimum wage, and is also failing to enforce it: According to an analysis of Asia’s garment industry, some employers exploit loopholes to avoid raising wages, such as demoting workers to lower-paid positions. And as always, the heaviest burden falls on women, who face an over 40 percent wage gap with their male peers.

Gender barriers are also embedded in what activists call a workplace culture of abuse. Only a tiny percentage of surveyed workers has access to subsidized childcare, according to GWC. Most “spend about one-third of their average weekly income of $305.36 on child care costs.” Many may be fearful about seeking childcare services they are actually entitled to, for fear of exposing their immigration status to authorities.

The fatal nexus of precarious immigration status, poverty wages, and the savage pressures of the piece-work system reflects and compounds barriers to organizing. Unionization rates remain extremely weak in LA’s garment industry, already pummeled by globalization. Organizing workers in a deathtrap garment factory in Bangladesh, meanwhile, can get you killed.

GWC sees unions and global worker solidarity, not just regulations, as key to improving labor conditions, through full engagement of workers in policy discussions and strong protection from retaliation when they speak out against bosses.

“The workers have to really be part of the conversation with brands and manufacturers about their wages and conditions…because what does it matter if a garment worker demands better wages or better factory conditions…if the factory owner also feels kind of pressured by the manufacturer, by the stores to produce really cheaply.”

Ordinarily, that downward pressure can drive manufactures to cheaper work sites, but LA represents an odd moment of globalization stasis: Employers have found here a sweet spot for optimizing labor exploitation. But if labor conditions have in a sense bottomed out, can workers turn their employers’ rank opportunism into concrete labor leverage?

Martinez thinks so: “We’re in a space where the jobs that were going to leave—they’ve already left.… Now is the time to really make a commitment to LA, now is the time that you can say, let’s work to create something better here in the midst of this race to the bottom.”

The garment sector may get a new safeguard with the $15 minimum wage. But LA can’t begin to take on inequality until garment workers can finally organize to lift themselves out of the downward spiral and up to a fair wage floor.