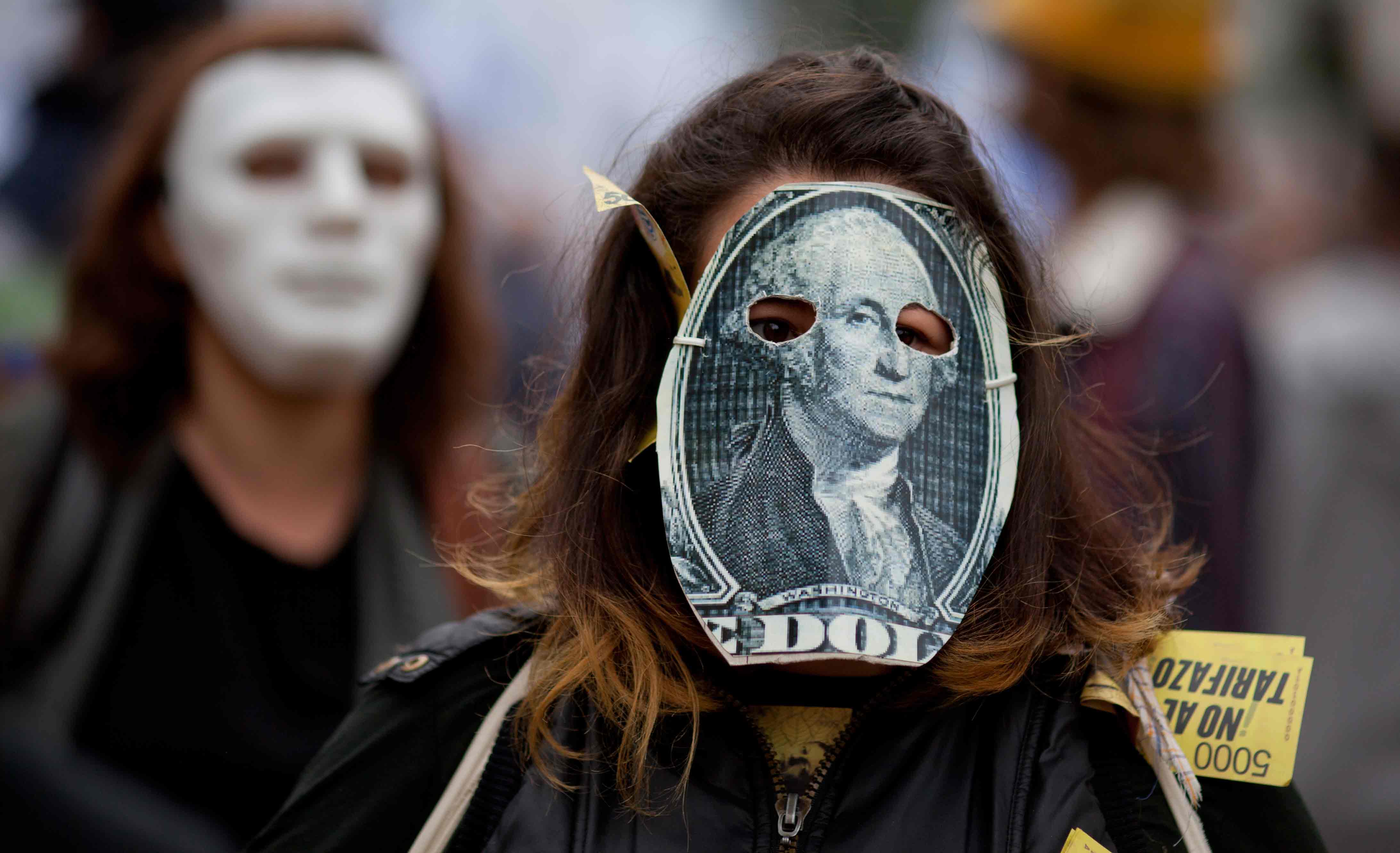 A demonstrator wearing a mask showing a detail of a US dollar bill protests the government's plans to make a deal with the IMF and increase the price of services in Buenos Aires, Argentina. (AP Photo / Natacha Pisarenko)

Ten years after the financial crisis, the International Monetary Fund (IMF) remains largely beholden to policies that undermine human rights and exacerbate inequality around the world. In response to the global recession, the IMF pressured countries to restructure sovereign debt—in part by adopting austerity measures that eroded basic needs such as health care and income security. The resulting human cost was immense, and the organization, while articulating more progressive policies, has been unable to heed the lessons of their failures.

The IMF exerts its power by dictating fiscal policies in exchange for loans and by providing risk analysis and technical assistance. The financial terms it imposes on governments have been derided as a one-size-fits-all approach with a myopic focus on economic growth. Dogged by these criticisms, the organization has recently trumpeted some reforms, as it often does in response to cycles of negative publicity. Laudably, the fund has been engaging with issues of gender and economic inequality, corruption, and climate change. Now, for example, the IMF more robustly considers the social dimensions of its macroeconomic policies, such as their impact on vulnerable populations. Even the fund’s strict adherence to market fundamentalism has come in for some introspection. In 2016, three IMF economists praised aspects of neoliberalism, but found that several of its central tenets had been “oversold,” admitting that austerity could have harmful consequences, that inequality hampers growth, and “that policymakers should be more open to redistribution than they are.”

Christine Lagarde, the IMF’s managing director, has been a particularly vocal champion of reform since taking over in 2011. Under her tenure, climate change and inequality have assumed an increased urgency. Lagarde claimed in 2014 that the IMF was no longer pushing the much-maligned structural-adjustment programs—a combination of privatization, slashing public spending, financial deregulation, trade liberalization, and labor market reforms. These developments raised cautious hopes that the IMF was finally undergoing a renaissance.

Unfortunately, it appears that the fund is adopting the rhetoric of reform—softening its image and mollifying its critics—but failing to make the changes that will meaningfully upend the status quo. Despite the rebranding, many of the fund’s damaging policies have continued apace. And, according to critics, many of the touted modifications are inadequately conceptualized, ineffectively implemented, and fail to address the core of the problems. “The IMF, as led by Ms. Lagarde, is on the right track, but it will be a mammoth task to change the direction of this ‘oil tanker’ of an institution and ensure that the benefits of globalization no longer accrue overwhelmingly to the wealthy,” said Philip Alston, the UN special rapporteur on extreme poverty and human rights. 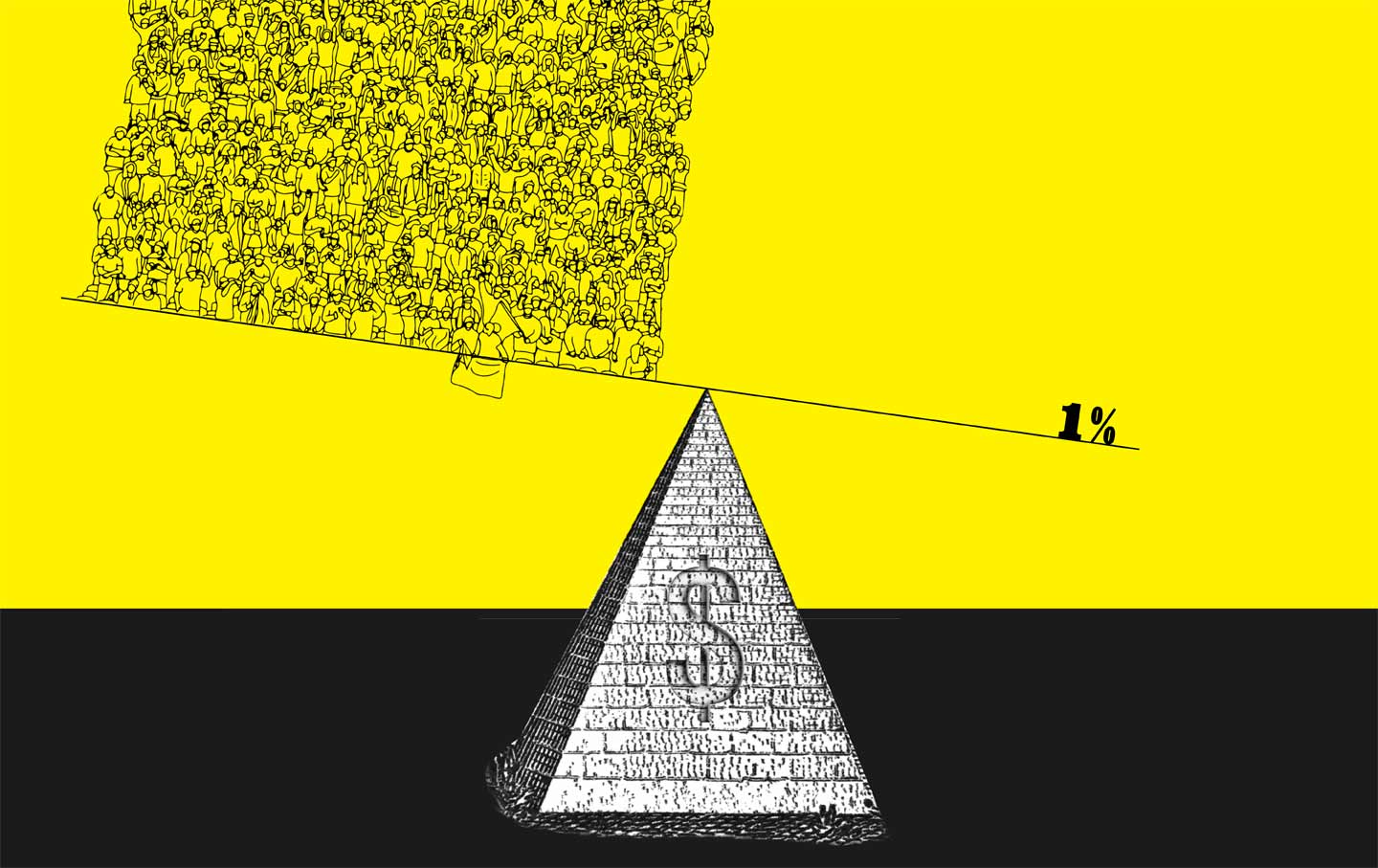 The Rise of the Inequality Industry

Under pressure to rethink the impact of its policies on the poor, in some cases the IMF has been encouraging social protections such as safety-net expenditures, however meager, though it declines to mandate that countries provide universal supports to all their citizens, and in many cases opposes them. Alston, who penned a critical report in June on IMF policies, notes that a human-rights-based approach would aim to “prevent or alleviate poverty, vulnerability and social exclusion,” and a floor would include “basic social-security guarantees for health care, as well as income security for children, older persons and those unable to work, especially in cases of sickness, unemployment, maternity, and disability.”

Critics claim that in practice the fund treats social protection more as charity than as something necessitated by flaws in the underlying ideology. According to Oxfam, “A truly ambitious and inequality-focused approach would first ask what structural reforms would directly benefit these groups, rather than focus exclusively on mitigating harm done to them by reforms.” Alston argued that “To date, the IMF has been an organization with a large brain, an unhealthy ego, and a tiny conscience. If it takes social protection seriously, rather than making a tokenistic commitment to minimal safety nets, it can show the world that it has actually learned from its past mistakes.”

Another example of the fund’s actions’ belying its stated intentions is in its gender analysis. According to critiques compiled by the watchdog NGO Bretton Woods Project, the IMF’s current attention to gender is long overdue, but not consistent, systematic, or comprehensive, and the organization fails to consider how barriers to full equality have economic dimensions. The report concludes that the organization relies on the flawed presumption that economic policy is gender neutral, ignores women’s unpaid work in the domestic sphere and greater participation in the informal economy, and doesn’t recognize that decreases in social spending disproportionately harm women. Piecemeal adjustments are inadequate, since “the cumulative impact…is so detrimental to women’s rights and gender equality, and mitigating and addressing each of these individual policy measures in specific ways misses the point.”

Compounding these shortcomings, the IMF holds that it is not required to promote human rights. The fund believes that human rights are inherently political and that since its mandate is apolitical, they are outside its mission. This stance ignores the reality that the architecture of global finance reflects political choices. As Alston notes, “That division of the IMF universe into matters that are either economic or political goes to the core of the problem of locating such issues as social protection, which are both economic and political but much else besides.”

The fund’s membership in the UN system heightens its obligation to advance that institution’s goals. But Alfred de Zayas, then the UN independent expert on the promotion of a democratic and equitable international order, said in 2017 that it has often failed to do so: “I deplore the fact that the lending practices of international financial institutions sometimes go against the aims of the United Nations, not just in the field of human rights, but also in achieving the Sustainable Development Goals.” De Zayas urged the fund “to abandon its ‘outdated’ insistence on ‘Wild West’ privatization, market deregulation, and austerity.”

The IMF faces significant obstacles to equitable transformation. Despite modest changes to the organization’s voting structure, which is determined by a quota system that considers a country’s GDP and other factors, high-income economies can still dictate terms to their low- and middle-income counterparts, and the United States retains veto power over certain decisions, including amendments to the IMF charter. Another impediment to a more progressive framework is institutional inertia; according to research done by Theresa Reinold, a professor at Duisburg-Essen University, the IMF has a deeply entrenched organizational culture that prefers the path of least resistance and relies on self-reinforcing perspectives. The fund, while not monolithic, is largely populated by technocrats who tend to be educated in the same elite institutions and lack incentives to critically reflect on alternatives to the organization’s embedded logic. Even when that ideology is challenged by the IMF’s research arm, it has not translated easily to policy-making and implementation. As Alston and others urge, democratizing leadership and ranks to include those with varied economic training and ideologies, as well as diversifying in terms of gender, geography, and range of expertise, would help the fund consider and integrate heterogeneous perspectives on economic policy-making, and foster a more expansive understanding of its policies’ impacts. And if the IMF continues to insist that human rights are outside its mandate, its Articles of Agreement must be amended to include them.

The fund is currently conducting a review of its conditionality policies that could allow it to advance a more egalitarian agenda. Civil-society groups urged the IMF in a letter to use this “opportunity to reconsider the current approach in favour of one that protects universal human rights and supports the achievement of the Sustainable Development Goals.” To that end, de Zayas recommended that the fund replace regressive loan conditions with progressive ones, including placing a moratorium on military spending, promoting tax reform and stepped-up tax enforcement, prohibiting the use of money to repay vulture-capital loans, and outlawing tax havens. Including civil society in this reform process is critical to counterbalancing the policy preferences of wealthy investor countries who are, in effect, ensuring a return on their investment by imposing self-serving economic terms on struggling countries.

Given the deep roots of the IMF’s past policy failures, consequential change will require more than just tinkering around the edges. But since transformative reforms are unlikely at the moment, incremental change is better than nothing. As Alston argued, “many observers now accept that there are strong links between populism, disillusionment with government, and the exacerbation of economic insecurity caused by the sorts of neoliberal policies with which the Fund has long been synonymous.” In this era of escalating tension between capitalism and democracy, the stakes for overhauling the IMF are enormous.