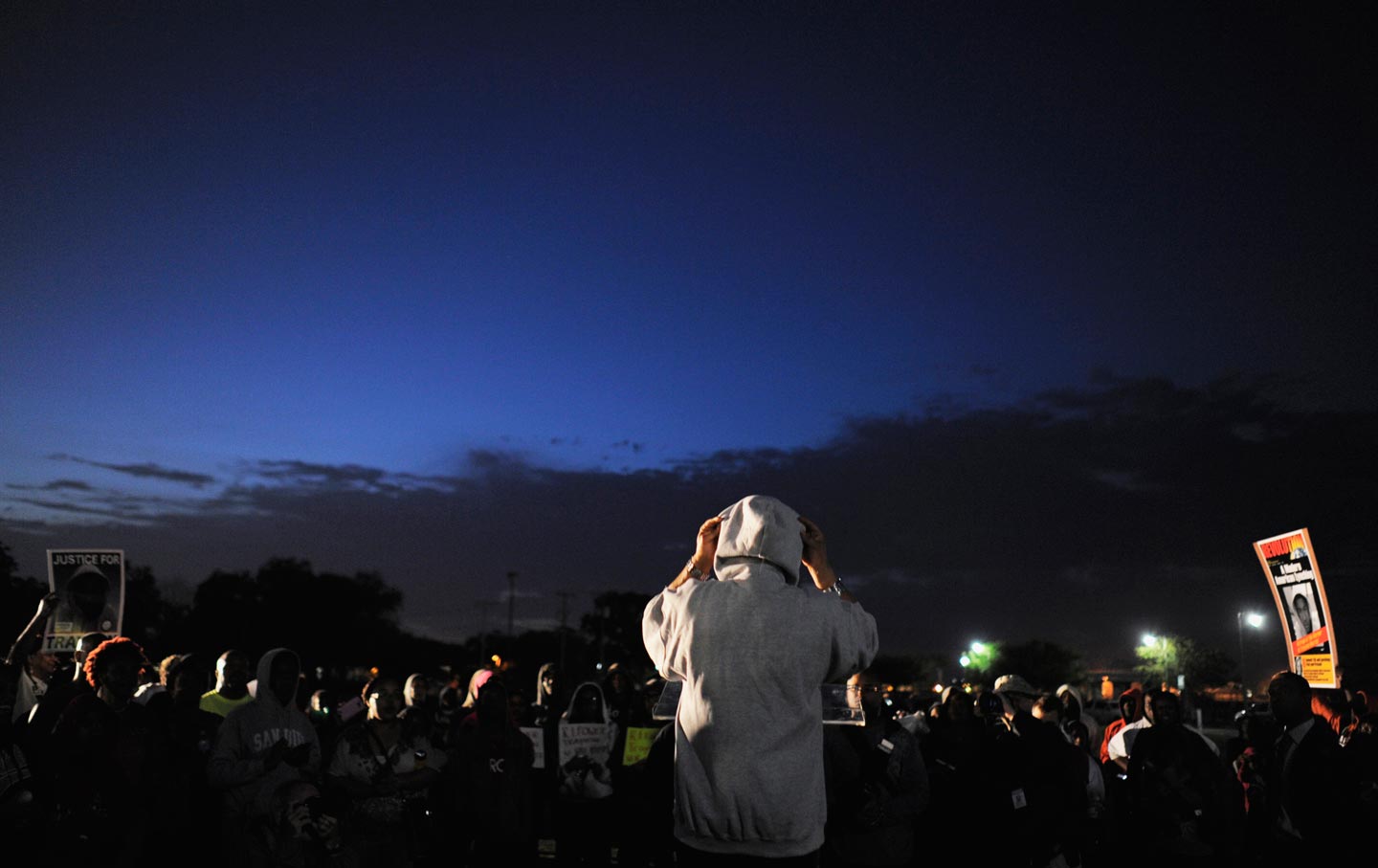 This familiar litany was recited on the news more than once in this vexed summer—a time weighted with foreboding, anxiety, and grief. We are all afraid of something: terrorism, random outlaws with PTSD, ominous political forces. As a result, gun sales have soared. Paradoxically, rising gun sales mean that it’s increasingly reasonable to suspect that someone pulled over by police to the side of the road will have one. Writes Ted Shaw, director of the Center for Civil Rights at the University of North Carolina, “in a society that worships gun culture and advocates the right to carry weapons, it cannot be that the fact that an individual has a gun automatically justifies shooting him.”

Yet it’s also true that the history of the right to bear arms is shaped by exclusionary privilege based on race and gender. It is almost exclusively white men who may “reasonably” carry firearms to protests outside Target or political conventions. It is almost exclusively white men who do not need to retreat from domestic disputes while on ground deemed “theirs.” Nonwhites and women, however, are much less likely to be able to walk through the world with assault rifles (or toy guns, or the shadow of anything that might resemble a gun) and not be mowed down for that reason alone—either by police or the idealized citizen-savior.

Police officers are charged with a duty to serve and protect public, collective geographies, not just ‘their’ ground.

Harvard professor Caroline Light has traced the history of our romance with legalized vigilantism. She dates it to the Reconstruction era, “when post-war political and economic turmoil and the enfranchisement of African American men fed late-19th-century gender panic, and the legal terrain shifted to characterize a man’s ‘castle’ and the dependents residing therein as an extension of the white masculine self.” Light (whose excellent new book Stand Your Ground: A History of America’s Love Affair With Lethal Self-Defense is forthcoming from Beacon Press next spring) asserts that current policies, including defunding basic public services, have led to a situation in which “the state’s retreat from the protection of its citizens creates a perceived need for (do-it-your)self-defense.” The supposedly race-neutral idea of “reasonable threat” actually encourages a “lethal response to black intrusions into spaces considered white.”

Recently, an officer from the North Miami Police Department shot and wounded Charles Kinsey, a black therapist trying to help a severely autistic patient who had wandered away from a mental-health center and into traffic. Pictures taken by passersby showed that neither the patient nor Kinsey was armed. Indeed, Kinsey had identified himself, explained the situation, and was lying on the ground with his hands in the air when the police shot him. Such a twitchy hair-trigger response reminded me that the North Miami Police Department had been chastised just last year for using African-American mug shots for target practice. Maybe such “practice” had successfully trained the eye toward what to fear and whom to kill.

Against this already charged backdrop, a judge recently extended Florida’s “stand your ground” law to protect police officers. The case at issue involved the death of Jermaine McBean, a 33-year-old black man who was shot three times after being spotted walking on a busy street carrying what turned out to be an unloaded Airsoft rifle. A judge dismissed all charges against Broward County Sheriff’s Deputy Peter Peraza, based on his assertion that he had no duty to retreat because he believed that McBean was trying to kill or seriously harm him.

But “stand your ground” laws are a subspecies of self-defense. The idea is that “ground” is jurisprudentially defined as a space from which one has the reasonable expectation of excluding others—i.e., one’s property. What makes the idea of standing one’s ground so troubling is precisely the question of whose ground it is anyway—yours or mine? What, indeed, of “our” ground? Law-enforcement officers, after all, are charged with a duty to serve and protect public, collective geographies, not just “their” ground.

“Stand your ground” laws have extended the older defense of one’s “castle” beyond the walls of one’s home to one’s subjectively determined comfort zone—which, in effect, allows a public street to be turned into conceptually private space. However problematic this may be in citizen encounters, judging police by this measure would represent a seismic shift in accountability. It is a cornerstone of our legal system—and of international law—that police, as state actors, respond to objective standards, not fleeting emotions. Our expectation is that they will be well-trained in techniques of defusing confrontation, and that they will deploy force only as a last resort.

If the mere experience of fear justifies violence anyplace, anytime, we have set a dangerous precedent regardless of race, gender, or occupation—but especially in the case of police. As Nakia Jones, a black police officer in Ohio, stated in an impassioned video on YouTube, we must also look at the tension between the call of duty—which is one of public service, even self-sacrifice—and the unmoored fears harbored by those who don’t know anyone in the neighborhoods they’re assigned to patrol. There are at least some who, in the absence of training, experience, self-restraint, and proper support, may fill that void with assumptions and panic—who would place self-protection so far ahead of the duty to protect the community that they succumb much too easily to an ethic of “Shoot first, ask questions later.”

Nikki Giovanni’s poem “Allowables” has gone viral of late, and perhaps it bears repeating as a counter-litany in these times of edgy stand-off: I killed a spider / Not a murderous brown recluse / Not even a black widow /And if the truth were told this / Was only a small / Sort of papery spider / Who should have run / When I picked up the book / But she didn’t / And she scared me / And I smashed her / I don’t think / I’m allowed / To kill something / Because I am / Frightened.