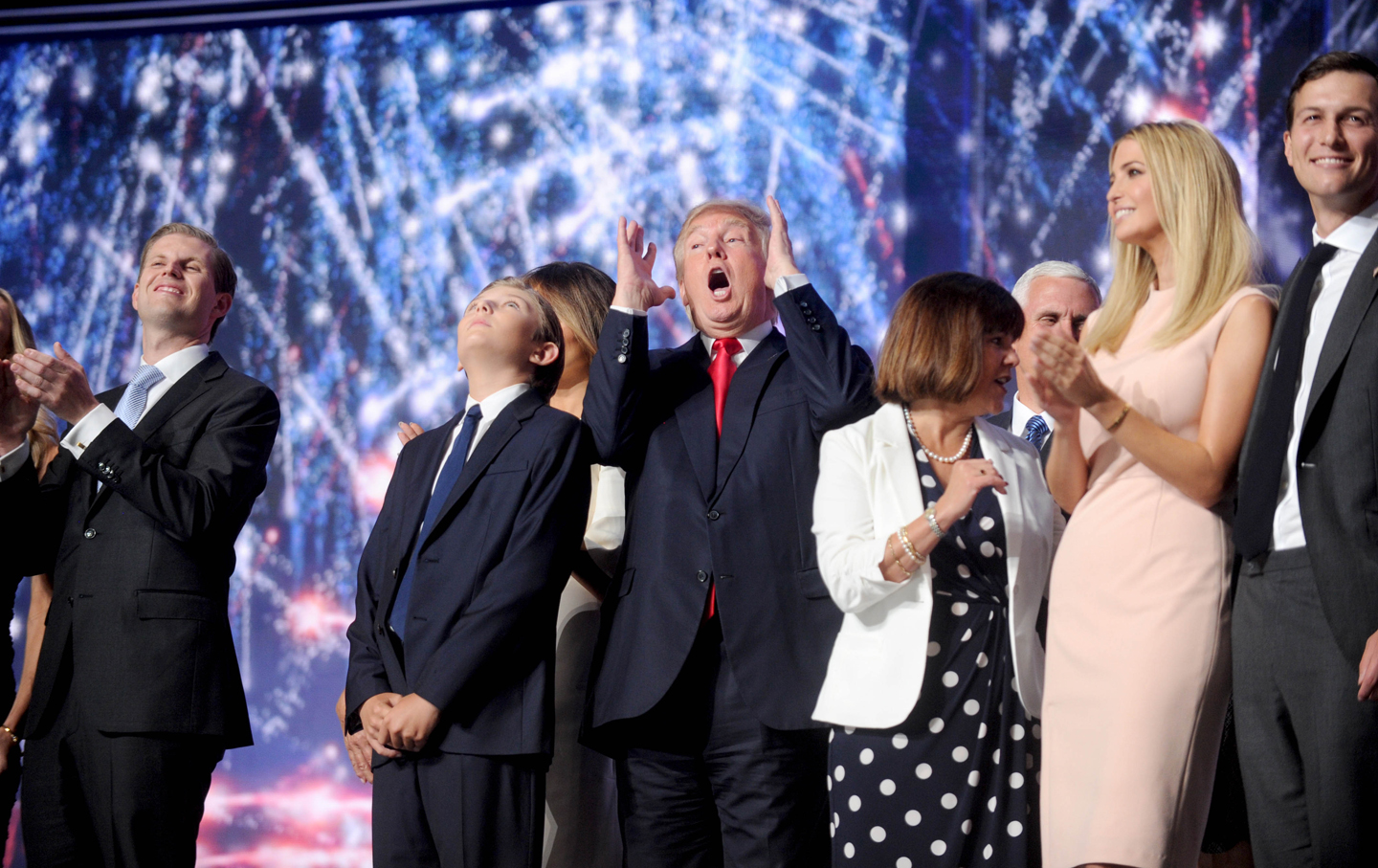 Cleveland—The Republican National Convention was a mess. Melania Trump wrecked the first night with a speech that affirmed the rhetorical genius of first lady Michelle Obama. Vice-presidential nominee Mike Pence delivered an acceptance speech that appealed to the 1948 Republican National Convention, or to anyone who had set their television to watch a rerun of The Lawrence Welk Show and ended up in political limbo. “Leaders” of a party they no longer lead crafted addresses designed to avoid mentioning their nominee for president, or, in the case of Ted Cruz, to suggest that “conscience” might lead responsible Republicans to vote for someone other than Donald Trump. The delegates harassed Cruz’s wife so aggressively that she had to be escorted from the floor. They then returned to interrupting any speaker who paused to take a breath with angry anti–Hillary Clinton chants of “Lock her up!” The platform committee delivered an appeal to unreason that was so aggressively theocratic that monitors of right-wing extremism determined that a once-grand old party had finally disappeared off the end of the flat earth. The rules committee figured out how to switch votes that were cast for Ted Cruz over to Donald Trump—in prime time and on national television, with the speaker of the House providing over the flipping process—producing the most precise illustration yet for the term “rigged system.”

Donald Trump knows that. His entire campaign has exploited the Banana Republicans.

Trump gets more about the politics of today’s Republican Party than the party leaders who watched in stunned disbelief as he stormed to the nomination. He launched his 2016 campaign with an understanding that the Grand Old Party’s self-hatred was so intense that grassroots Republicans would gladly nominate a man who opposed its policies, ridiculed its past nominees, and had a history of donating money to its opponents. The 41st Republican National Convention confirmed that Trump was right in his cynical assessment.

The party-definition phase of the process is now finished. Trump prevailed—upending the best and brightest of the Republican Party’s candidates, consultants, and commentators without breaking a sweat. He never had any respect for these Banana Republicans, and he has less respect for them now.

Trump said as much in his acceptance speech Thursday night. He did not announce that Republicans were ready to cure what ails America; he declared: “I alone can fix it!”

The question that lingers is this: Could Trump upend the best and brightest of the Democratic Party’s candidates, consultants and commentators? November’s a different game. Trump will have to break a sweat. But do not presume that he is out of his league—or out of the running.

Trump recognizes the absolute absurdity of contemporary politics better than anyone who is left in the running for the presidency. After all, he has created most of the absurdity. And he has made it work for him because he understands that, when all the rules of communicating and campaigning are in flux, it is possible to write new rules. Like Richard Nixon in 1952 and again in 1968, Trump understands the media of his moment, and he has since the beginning of the 2016 race been using that media to deliver explanations of his foibles and failures that have been every bit as cynical—and effective—as Nixon’s 1952 “Checkers speech” or the 1968 “selling of the president” (as detailed in the eponymous book) strategies adopted by Roger Ailes and his fellow Nixon aides.

But ridiculous won out in those elections.

Trump’s now free to make an appeal to Americans who have cast ridiculous votes in the past and who could do so again.

And Democrats who assume that the United States cannot have its banana-republic moments would be well advised to consult their history books—or a video of Trump’s vitriolic acceptance speech on the final night of this year’s convention.

They might also want to consult the new Suffolk University Poll from the swing state where the 2016 Republican convention was held. Conducted during the first three days of the convention, it had Republican nominee Trump at 44 percent and Democratic nominee Clinton at 44 percent—with 11 percent undecided.

Those undecided voters aren’t likely to go against Trump because Melania Trump’s speech plagiarized a few lines from Michelle Obama, or because Ted Cruz is not on board the Trump train. In fact, being opposed by the guy who tried to shut down the Senate should be recognized as a net benefit in any effort to appeal to rational voters.

So Trump has survived the convention of a party that never really welcomed him and now he is free to make an appeal to Americans who have cast ridiculous votes in the past—and who could well do so again. (Notably, CNN/ORC instant polling found that 57 percent of people who listened to Trump’s speech were “very positive” about it, while 18 percent were “somewhat positive.”)

Democrats are welcome to enjoy a good laugh at the expense of the Republicans. But Democrats should be aware that Trump is laughing with them at this point; he also thinks the Republican Party is a joke.

When the laughter dies down, however, Democrats must avoid the mistake that the Republicans made. Republicans underestimated Trump; they never created a consistent or effective counternarrative to the billionaire’s self-promotion. Democrats can begin to create their own counternarrative when they gather next week for their convention in Philadelphia, and it can win. The key is to combine the intersectional politics that Clinton practiced when she was at her best during the Democratic primary fight with the economic-justice politics that Vermont Senator Bernie Sanders practiced as he was coming very close to derailing Clinton’s run.

The next politics of the Democrats must be forward-looking in its recognition that Americans have been unsettled by downsizing, deregulation, deindustrialization, globalization, and automation.

Trump knows how to exploit fears of the future. Democrats can only counter him with a vision for the future—a vision that respects those fears and addresses them. America is not a banana republic, but it is a vulnerable republic. Trump and his backers will seek to exploit that vulnerability—just as they exploited the vulnerabilities of an increasingly delusional Republican Party. Democrats must name and shame Trump’s politics of exploitation, and then they must counter it with a new politics that speaks to the better angels identified by the first Republican president: a fellow named Lincoln who would not recognize what has become of his party.